After I posted my saga about Hawkeye's feet, Rebecca asked me if a dun horse with tough, dark feet would fare better in our wet, acidic soil.

(For those interested in hooves, I suggest this article about the effects of excess moisture in hooves. Pay particular attention to what the author has to say about Chincoteague ponies, it is most applicable to our situation.)

We have not had any duns around, but, genetically speaking, a dun is a dilution of black and we have had black as well as grey (which is also a dilution) and dark bay.  Dark colored horses do tend to have very tough hooves.  Ramsey's hooves are harder than Emma's, which shows that the same holds true for donkeys.

Do those tough hooves do better?  Yes.  Do they also have problems?  YES.

For example, here is one of the hooves of RB's other horse, Izzy (short for Izolde).  I don't mention her much because she is 29 years old and has been retired for many years now.  She is a purebred Arabian mare that RB has had for at least 25 years.  She has never worn shoes.  She is a very dark bay with no white and super hard, tough feet.  She has MUCH better feet than any of the other horses currently here. 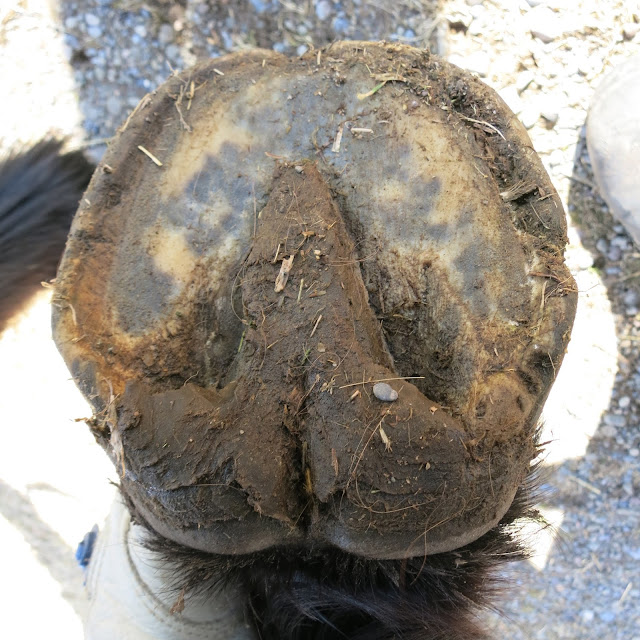 This is more like what a horses heel should look like, although you can still see what the constant wet does to them.  It is wide with a well-developed frog, the hairline is parallel to the ground and even overgrown and ready for a trim, they are short.  Izzy never has sore feet - except for the very rare occasion when she goes for a short ride on gravel.  She never leaves her home environment so her feet never have to adjust to hard ground. 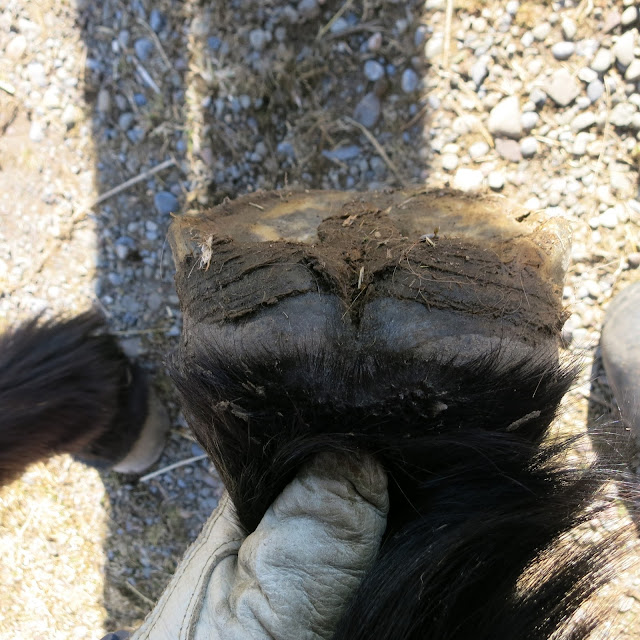 If you look close at the toe and along the right edge though, you will see hints of the troubles that do plague her feet.  That little divet at the toe is actually a crevice of wall separation that extends halfway up her foot.  We get the black holes to grow out, then they reappear as soon as mud season hits.  They have been treated with resection, tea-tree oil, White Lightening, cider vinegar, Clean Trax, copper sulfate, plus a few others I can't remember.

The holes don't bother her because she has thick, tough soles and a big chunky frog.  I manage them with trimming and we have given up on everything else because the horse is sound and none of it helps. 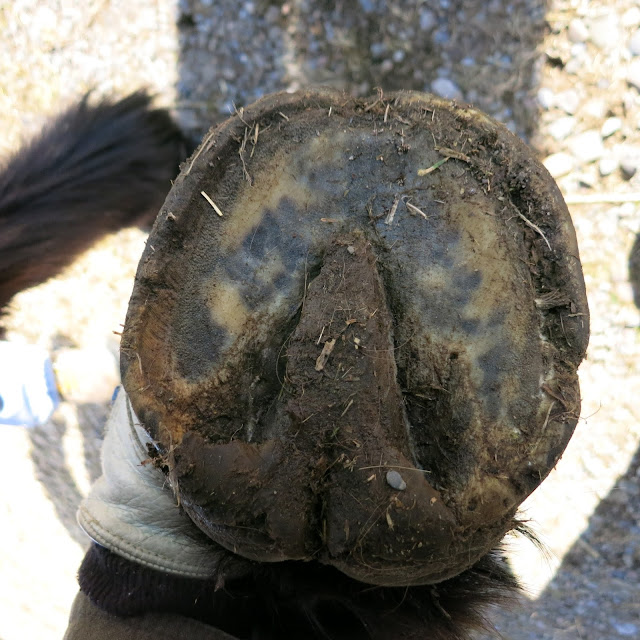 I trim the walls down to the level of the sole and put a strong bevel all the way around to help push the walls inward instead of outward, which is what happens to hooves in wet ground.  It is a constant battle to keep her hoof walls in tact.  Left to "self-trim", the walls just get longer and longer and the separation gets worse.  Her feet are so tough, that they never break off, they just keep splaying out and getting longer even though she has a large area of pea gravel that she has to walk through daily.  The gravel should wear the excess down, but it isn't enough. It helps, but not enough.

Izzy does have arthritic knees, if her feet are left long to self-trim, she becomes quite lame in the knees because it is so much harder for her to break over.  I keep her feet trimmed short and make sure that she can break over where here crooked knee wants the hoof to break over.  It keeps her happy. 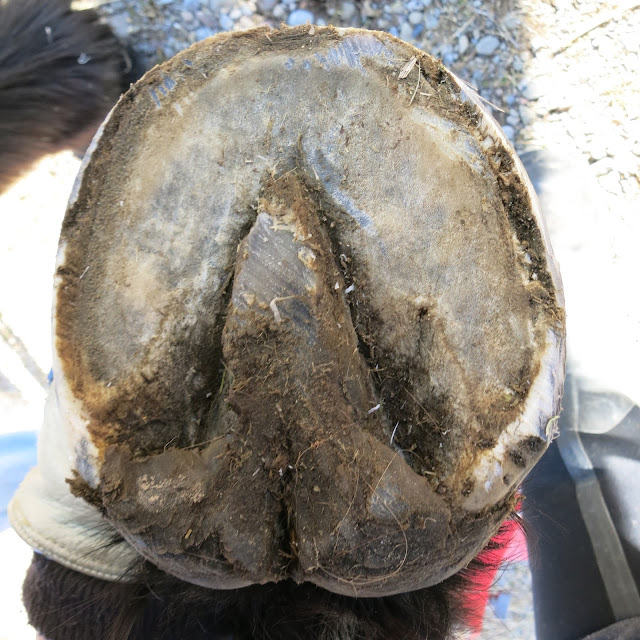 This is where the wild horse model fails in the Northeast, or any other wet environment, it just does not take into account the constant wet nor the acid soil.  A friend had her soil tested and it came in at 3.8pH.  In the hospital where I work, we use a diluted acid solution to dissolve the keratin in samples of fingernails that we get.  The pH of that solution is generally around 3.5pH.  Soaked overnight, the nail becomes soft as butter so we can cut microscopic sections of it.

Hooves are made of keratin. 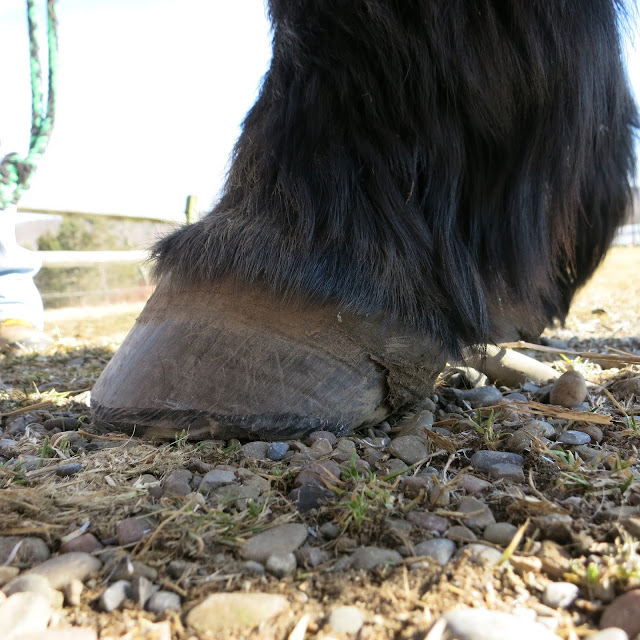 When Hawkeye was doing so poorly, RB bought Bailey, a young, black mare.  Not only black, but half mustang as well.  She had very tough, self-trimming, rock-crunching feet that were a large selling point for RB when she bought her.  We were VERY interested to see how her feet would hold up here.

Before Bailey got here, she was living about an hour away, in an area that have gravely, well drained soil.  She was eating unlimited grass hay, pasture and getting several pounds of sweet feed each day.  RB continued the same diet except for the sweet feed.  We work hard to limit the amount of sugar in the the diet, because it is a leading cause of hoof and metabolic problems.  By all rights, Bailey's feet should have at least stayed the same or even improved.  They did not.

Within two weeks, Bailey's feet still looked good, but she was no longer comfortable on hard, rocky ground.  RB began using boots on her for riding and she was fine.  We did not do anything with her feet, hoping they would continue to self trim.  After about 12 weeks, her feet were very long and large crevices were developing in the white line.  I trimmed them and they immediately improved.  After that, we kept her on a regular trim cycle and she was fine, although we continued to battle wall separation if not trimmed short enough - just like Izzy.

Bailey is not the only one.  When I first moved to this property in the fall of 2009, I had two horses, Suki and Gwenna.  The were both in their teens or twenties and had good feet.  Suki had great feet.

Until coming here, I paid no more attention to hooves than any good horse owner. I fed good hay, paid a farrier to come out every 6-8 weeks and didn't think about their hooves much.  I didn't have to because they never had problems.  Suki started having hoof troubles, just like Izzy's, within the first month.  That was the true beginning of my epic hoof odyssey.

Suki now lives a hundred miles from here, in sandy soil and her hooves are, once again, fine.

Every single horse who has lived on either of these properties, has ended up with hoof problems, as have the horses living on the soil that tested at 3.8pH.  The horses with tough feet, like Izzy, Suki and Bailey do handle it better.  Their feet are better to start with and their troubles are less severe and easier to deal with.  A horse like Hawkeye, who was shod from an early age, has a long history of hoof disease and has metabolic issues, is very difficult to manage in this environment.

Would the hypothetical dun horse do better?  I think he would be just like Izzy, Suki and Bailey.  He would do better, but not without problems and not as well as he would in a better environment.

Posted by The Dancing Donkey at 12:30 AM