The big question we've all been asking ourselves today is - how did we ever survive last winter?

It was a brutal weekend with record breaking lows last night.  It was about -28 below last night and we had high winds all day for the past two days, putting the wind-chill values somewhere south of the bottom of Hell.  Up here on HellWind Hill, we had a steady 30-40 mph breeze.

I knew this would happen since I mentioned the lovely, mild winter we had been having.  You should never write things like that out loud, the cosmos just won't stand for it.  I'm convinced that there is a nasty little deity who sits up near the third star to left of the Big Dipper, watching all of of us.  He is a scrawny, grimy little guy with a smarmy smirk who lounges around in an old, orange plaid LazyBoy with a can a Mt. Dew in one hand and a big fly swatter in the other.  Every time one of us fools sticks our heads up too high - WHAP!

Last weekend we actually did this... 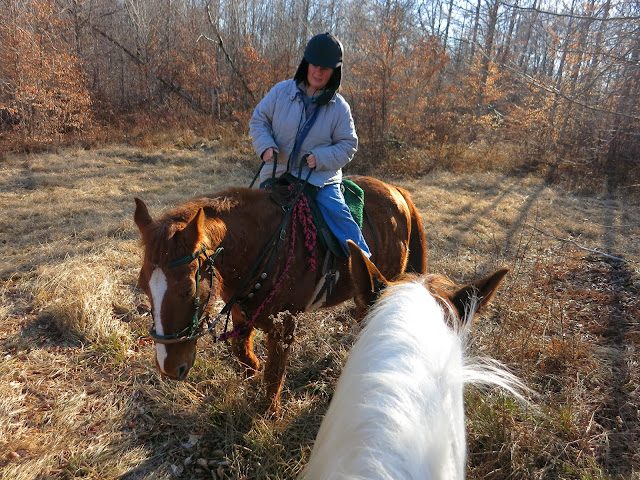 We had a nice ride and it was good to get out on a horse again.  Hawkeye was a real pistol though and RB actually had to get off and walk the last bit home.  Isn't that always the way?  You finally get the horse feeling really good and then he gets too crazy to ride (WHAP!).  I told RB I could pull his shoes off and that would slow him right down.

Just kidding (mostly), once we can be out riding regularly again, he will settle down to a manageable, if speedy, level.

This weekend - we endured.  And swore a lot.

I went out last night to check on everybody and I asked Emma if she wanted her blanket on.  She wanted no part of it last winter despite how awful it was, but when I held it up last night she came over and stuck her head right through. Never let it be said that donkeys can't tell you exactly what they want. 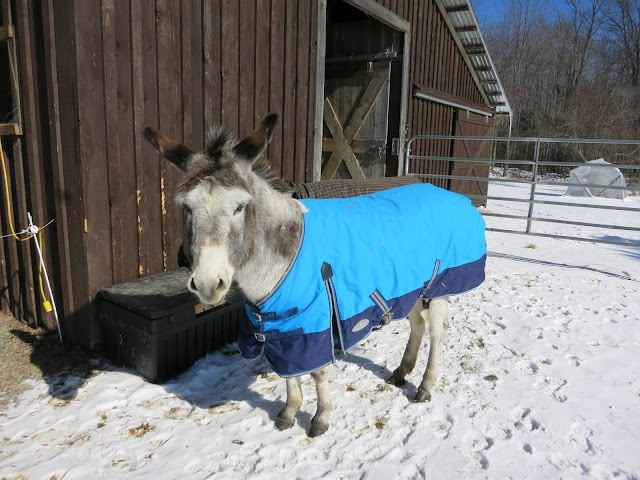 They don't hang out with giant fly swatters waiting for the opportunity to whap you when you get out of line either.