Where We Are Now

After my experiments with nailing on EasyShoes the summer of 2014, I was a bit more prepared to deal with the crisis that Hawkeye found himself in last summer.  He was much healthier after being treated for Lyme disease, but his feet had degraded so much by that point that he was constantly sore on all four feet, especially the fronts.

We had x-rays taken to see if we were dealing with bone loss or rotation (I don't have copies of those x-rays or I would post them).  Fortunately, they didn't show anything like that.  However, he only had 5-7mm of sole depth (it should be at least 12-15) and he had severe white line separation that involved nearly 4/5 of both front feet and about half in the hind feet.  The separation went nearly up to his coronet band.  He also has badly contracted heels, with a very weak, poorly developed frogs.  Basically, there was just nothing holding this poor horse up.  Any one of these things causes problems, but having all of them together just put him into a no-win downward spiral that we were desperate to stop.

The glue-on shoes had not worked well for us and Hawkeye had such huge crevices in his white line that I was afraid the glue would work up into them and cause lameness all on it's own.  You can fill those holes with Keratex mixed with copper sulfate (which I did), but they were so bad in this case that I wasn't sure that would be good enough.  I was really afraid to nail into those crevices as well, but finally deemed it to be the lesser evil.  I was dubious as to whether the hoof wall would even hold up to nails, but we tried it anyway.  We didn't have much to lose at this point.

The x-rays had shown that his break-over point (the toe) needed to come back a full cm so I brought his toes back as far as I dared in one trim.  You have to be careful doing this on a horse with so little sole and poor wall connection as it is very easy to invade the sole and further lame the horse. Do NOT do this to a horse unless you have a good plan to provide protection afterward.  Everything I did here was done with veterinary involvement and approval. 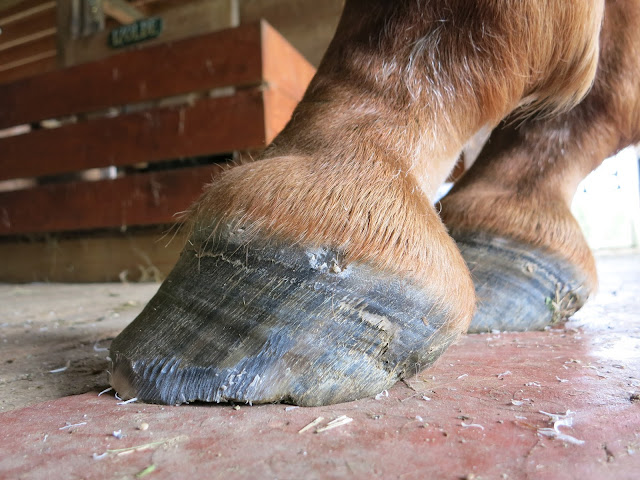 I've added some of my infamous scribbles to this photo showing where I was trying to get the toe (the lines aren't as straight as they should be, my drawing skills aren't that great).  The wall separation caused by white line disease that I outlined here was on both sides of both feet. 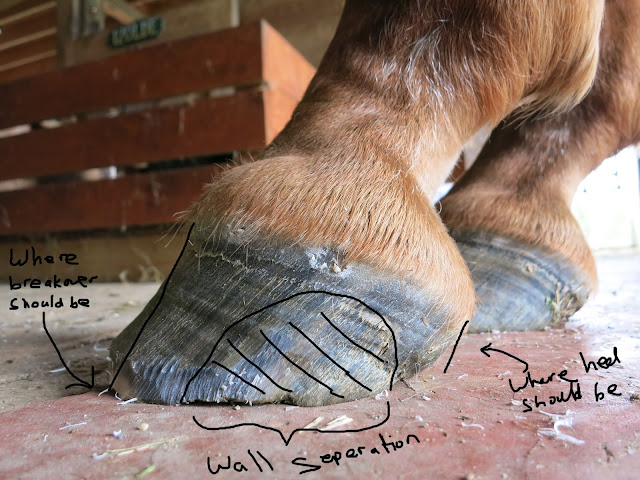 Unfortunately, I was so worried about getting the shoes right that I forgot to take pictures of the soles the way I usually do so this is the best I can do.

If you think these feet look really small for the size of the horse - they are.  There just isn't enough foot here to support a 16 hand, 1300 lb horse. 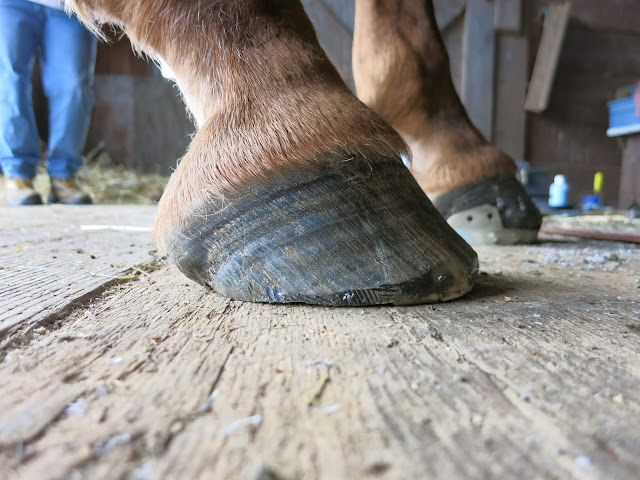 This isn't something you can trim your way out of.  It's like that old carpenter's cliche: you can cut and cut, but the board still won't get any longer.  Aside from bringing the toe back, I did not cut anything off these feet.

There are lots of barefoot trimming advocates who might criticize my methods and be cringing at putting shoes on this horse.  To an extent, they may even be right.  If I could take this horse somewhere where he could be turned out on a large, DRY acreage with plenty of varied terrain that he had to cover to get his low sugar/low starch hay, his feet would heal themselves.  Unfortunately, that is not an option.

We talked a lot about taking Hawkeye to Cornell or to a specialized trimmer down in PA (who would have glued on a set of Easyshoes).  Given my experiences with the new farrier at Cornell, I think he would have told us to put him down.  The PA farrier is a long way away and there are no local farriers who could (or would?) help Hawkeye, so he is stuck with me.

I cleaned out those crevices as best I could, treated them with Tea Tree oil and then packed them with a mixture of Keratex and copper sulfate granules to kill the bacteria that had set up house in there.  I set the shoe way back under his foot to bring the break-over back where it should be, give him full support in the back of the foot and get him using that part of the hoof.  This was in the beginning of August. 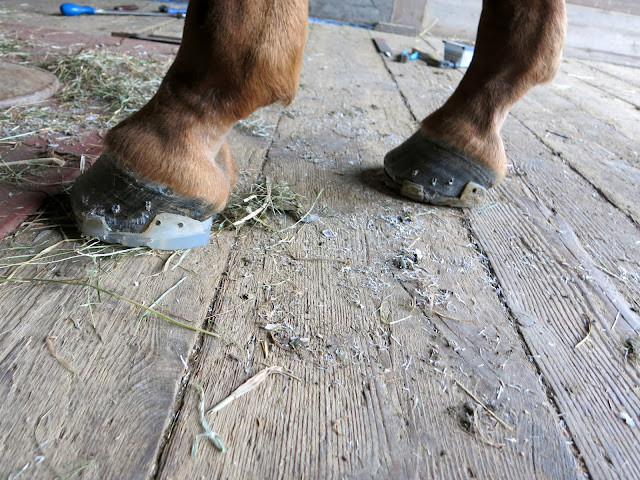 I wasn't sure if the shoes would move around too much so I left parts of the gluing tabs on to help stabilize things. 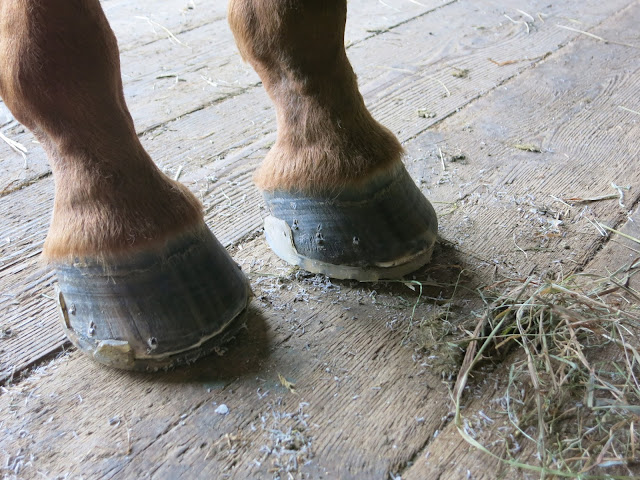 I know RB was hoping for instantaneous results when we put these on, but that is not quite what we got.  About 3 days after putting the shoes on, I got a call from her.  She said he was still the same and we should just pull the shoes off because he was still sore.  She would go back to trying to keep boots on him 24/7.  That had not worked before and I really felt that we were running out of options.  I thought we should give it just a bit more time so I talked her out of it.

We had nailed shoes onto a lame horse after all.  We had also made a lot of very sudden changes to a lame horse who had not been able to move well for months.  It would have been nice if he had walked off sound right away, but that was too much to hope for.

Three days later though, I got another call - he was moving a lot better.  A week after that, RB starting riding him lightly.  By Fall, Hawkeye was doing 10-15 mile rides and RB was complaining that she was having a hard time keeping him to a pace that wouldn't kill the other horses.

The shoe you see in the photo below was one of the shoes we tried to glue on the previous year.  You can still see some remnants of the glue on the tabs.  I chiseled the glue off and reused the shoes. 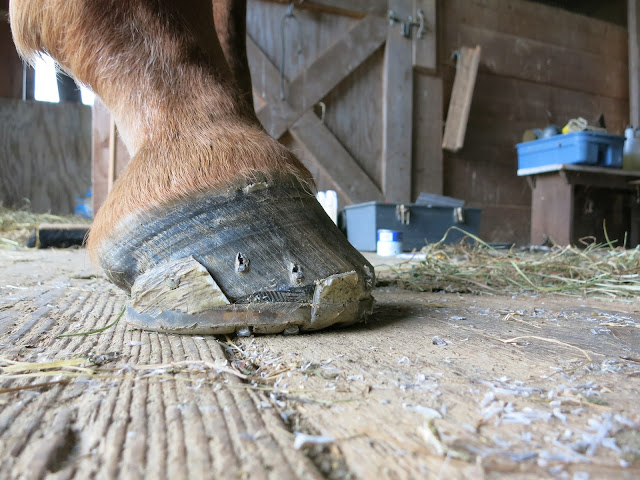 If you were to draw a line down the front of this foot, from the coronet band to the toe, you would see that the breakover point is where it would be if this were a healthy foot.  The toe may look like it is hanging way over the shoe, but that toe is really like scar tissue.  I could have rasped it off to make things look prettier, but that would have just thinned the scar tissue and left him more vulnerable to bruising when he hits one of the 4 trillion rock in his pasture.

This was taken about 4 weeks after the first shoeing - not a pretty job, but he was 100% sound at this point. 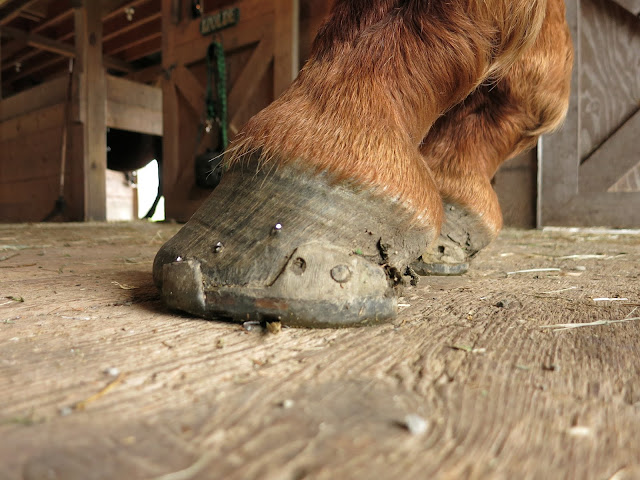 That high nail right in the center of the foot is higher than I would usually like to see.  However, that wall separation that I mentioned earlier extended nearly half an inch above that point.  The nail was nowhere near live tissue when I put it on so I left it.

Within 12 weeks of his first shoeing, his feet grew so much that the white line separation had diminished by half.  After six months, it is now completely GONE and he has good tight wall connection all  the way around.  His sole depth has at least doubled and his heels are a 1/2 inch wider than they were.  He runs around in the pasture and he does not think about his feet anymore.  He goes on trial rides and easily tromps over shale and gravel. He is happy.  He is sound.

Hawkeye might eventually grow enough healthy hoof that he can transition back to barefoot.  He might wear Easyshoes every day for the rest of his life.  As long as he stays sound, either is fine with me.