My pond is being taken over by weeds.  I tried once to stock it with catfish, which were supposed to help keep the pond clean.  They did not make it through their first winter though and I haven't managed to get more yet.  I've also found conflicting information about whether or not catfish really will help or not.  The DEC says that Grass Carp are the way to go, but I can't get any until next Spring.  Meanwhile, the darned weeds are making it tough going even for Connor and it's not a very appealing swimming hole is it? 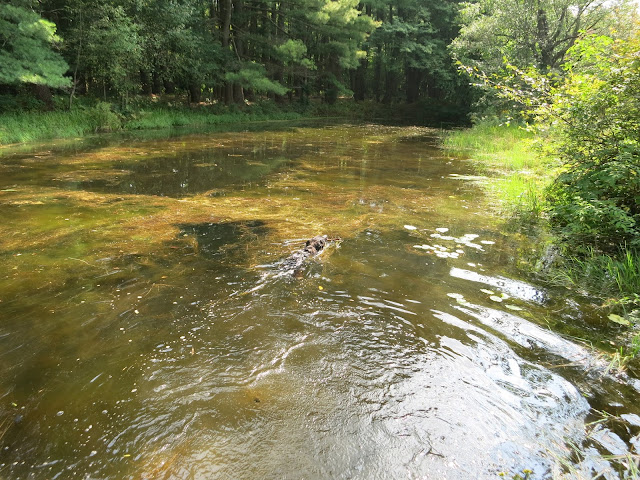 I think the weeds may be why I have been seeing fewer and fewer turtles this year.  This stuff must be awful hard for them to swim through.  I read that one good way to control weeds in a pond is to just pull them out, which I discounted because it seemed like an overwhelming job.  However, after the past couple of weeks of blistering heat, jumping into a weed choked pond didn't seem like such a bad idea.  This afternoon, I decided to try doing a bit of water gardening.

Once I got past the minor ick factor, this turned out to be a fun job.  The weeds are barely attached to anything and I was able to pull them up just by swishing my arms around in the water, it's just like twirling spaghetti.  I just went out into the weeds, thrashed around and then staggered back to shore, heavily bedecked in weeds.

Too bad for all of you that there was no one around with a camera, it was probably quite a sight.  Just picture an amazon sized, middle-aged, red-head in ratty shorts, tank top, hat, sneakers and life vest (because my feeble swimming skills are not up to keeping me afloat with 30 lbs of weeds wrapped around each arm) emerging from a pond liberally festooned with huge, spaghetti-twirled armloads of water weeds and you'll get the idea.  If that isn't quite enough, add in the times I used the pitchfork instead - sort of like Swamp Thing meets Poseidon.

It was really quite invigorating and a heck of a water aerobics workout.  Maybe I could start a new exercise fad.  Who would like to join me?

I pulled out three heaping piles of water weeds.  I'm thinking this might make a nice mulch on the garden. 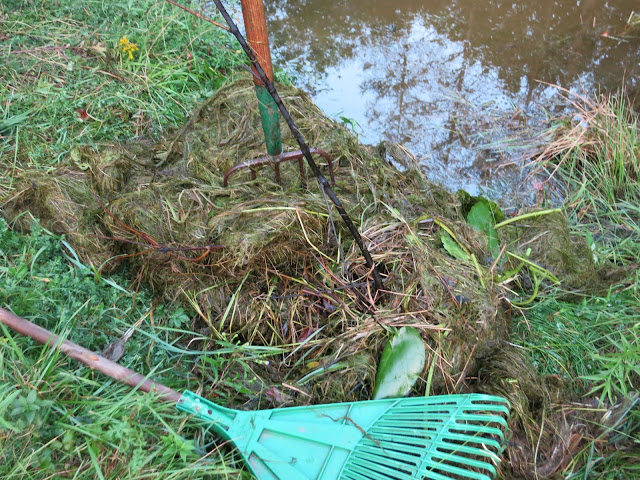 I'm very good at mulching gardens.  Too bad I'm not so good at actually growing things in the well-mulched garden.  If I just keep adding mulch, the soil will improve eventually right?

I stirred up a lot of silt during this process, but didn't encounter anything other than some very befuddled frogs.  I do think it helped.... 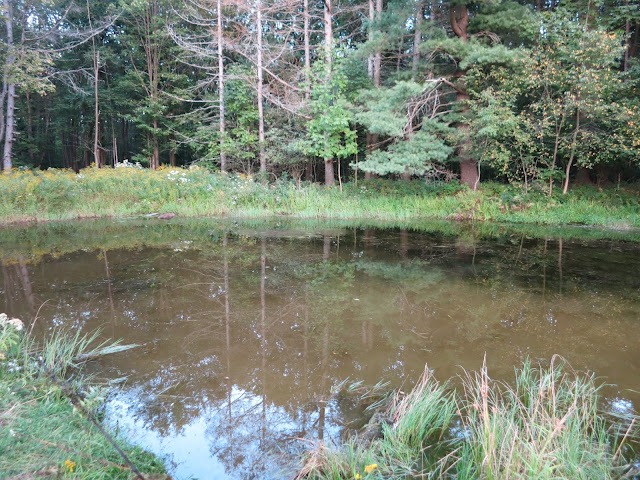 At least it helped in the section of the pond I managed to cover.  It turned out to be a good use of a horribly hot day, but I do hope that I can get some Grass Carp and maybe some more catfish in here next year and that they take over this job.  I don't think I can keep up with it.  If nothing else though, Connor (and the turtles) will be able to swim safely now and we both had fun playing in the water.

Posted by The Dancing Donkey at 2:10 AM