Cornell sent me a disk with all of Ramsey's x-rays on it.  He has had more than 60 radio-graphs taken.  Most of them were clearly taken during his surgery, probably for guidance and to make sure they had disease free margins.

The first two pictures are the first ever taken on Nov.2 and were how the vets diagnosed septic pedal osteitis.  I am no expert at reading x-rays, but if I have read this right, this is a front to back view of the right foot.  The bottom most bone is the coffin bone or P3 (the third phalanx), and is where the infection was.  If you look at the right hand side of the bone, you will see that it has fairly clear, well defined edges.  The left side of the bone appears fuzzy with vague borders, that is the infection.  Below the bone, there is a dark oval, I think that is a pocket of abscess.  The dark spot on the bottom right is where there was a piece of hoof cut out of the sole. 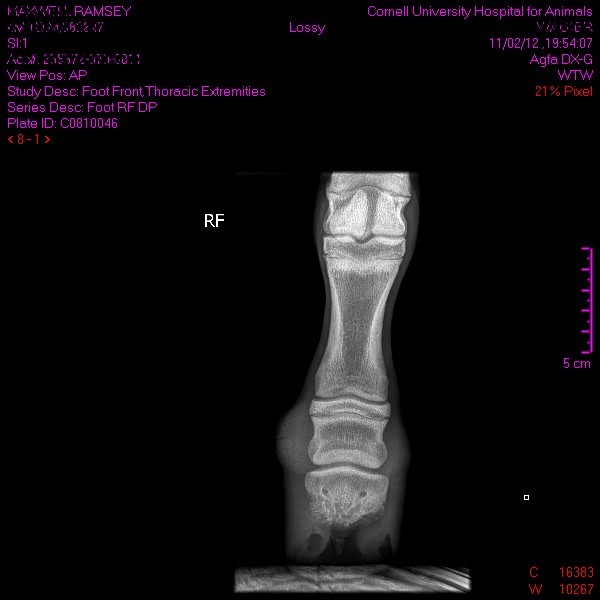 I think this is looking down through the top of the foot.  Again, the right side of the bone is clear, the left is a dark, fuzzy shadow. 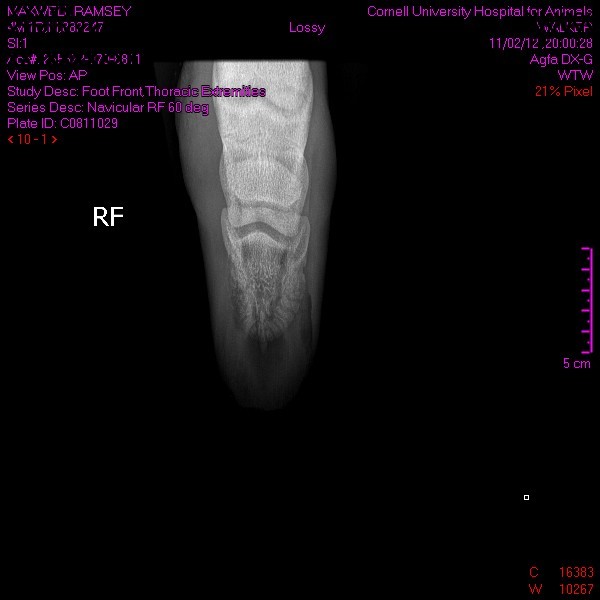 These were taken during Ramsey's surgery on Nov. 3.  I think the needles were used as markers to gauge whether the margins were clear. 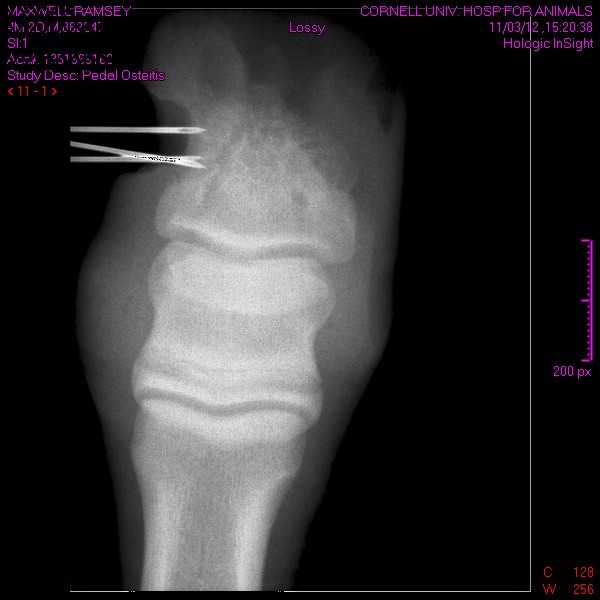 They took some bone out, repeated the x-rays and then took more.  Several times. 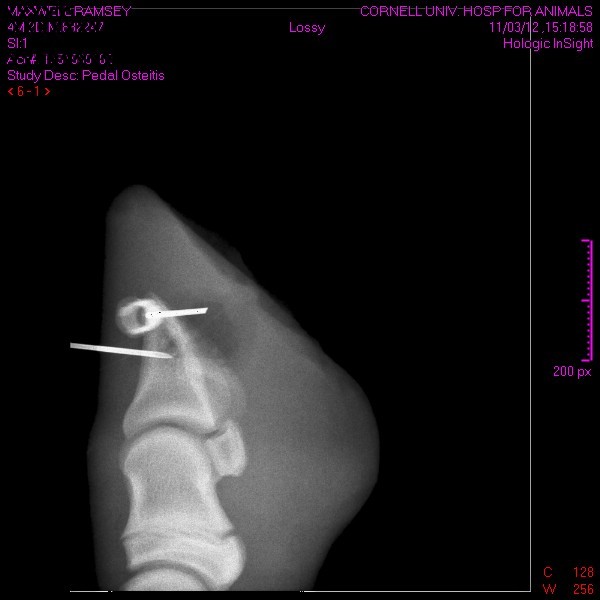 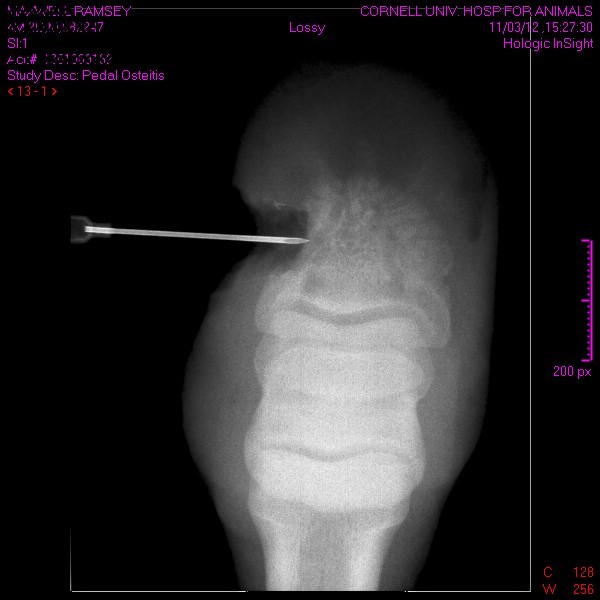 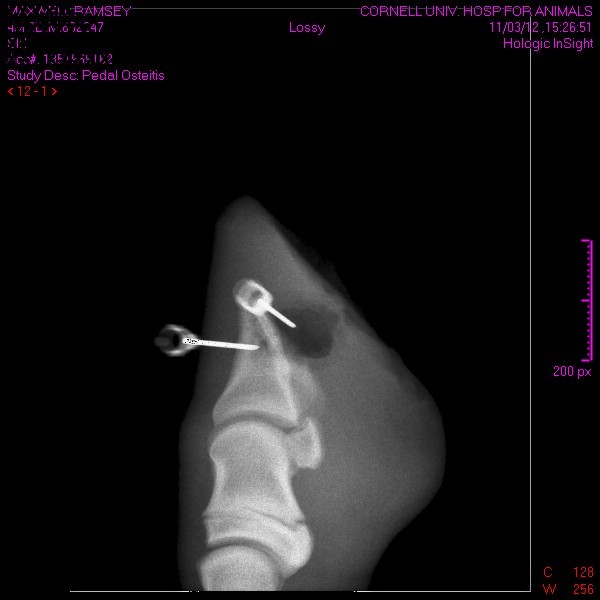 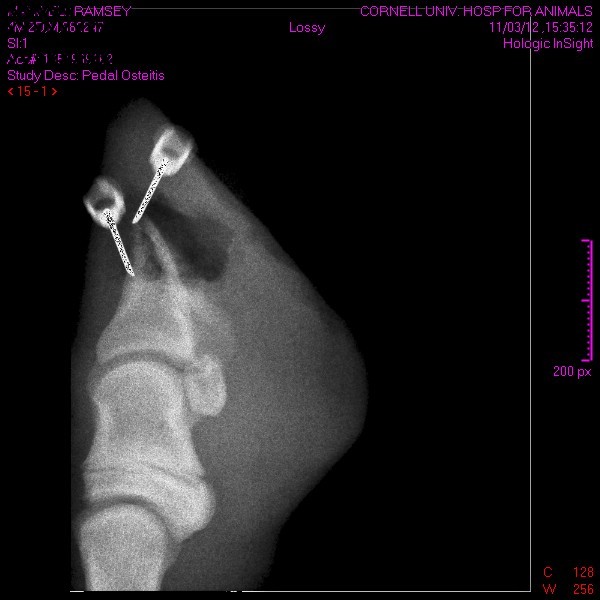 They were never able to tell for certain if the joint was involved so they treated it as if it were and flushed it with antibiotics.  You can see the needle inside the joint capsule. 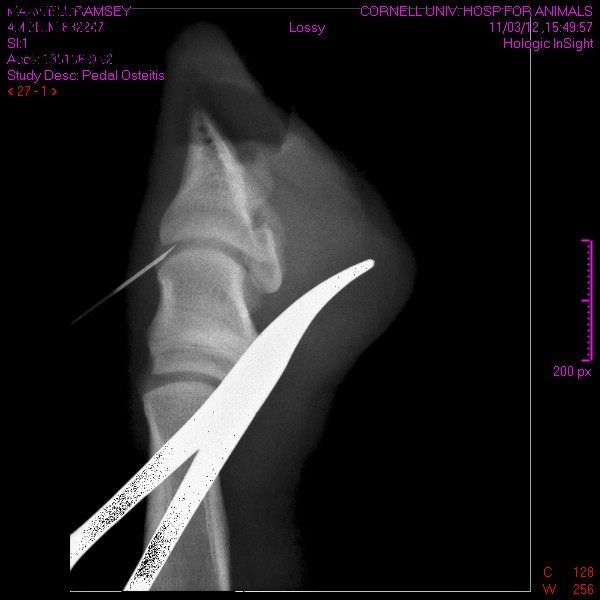 These were taken on Nov. 30 to check Ramsey's healing progress.  The margins of the remaining bone are sharp and clear.  No infection. 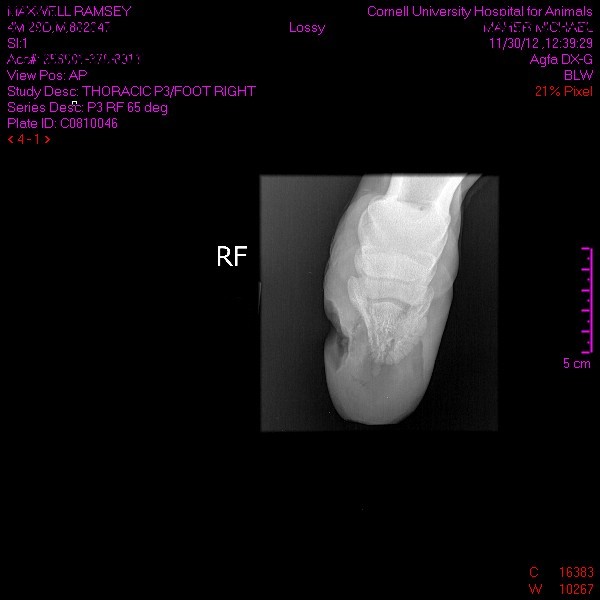 A lateral view, also taken on Nov. 30.  You can still see the hole in the side wall of Ramsey's hoof.  The shape of the hoof and the position of the coffin bone is good.  The bottom of the bone is mostly parallel to the ground. 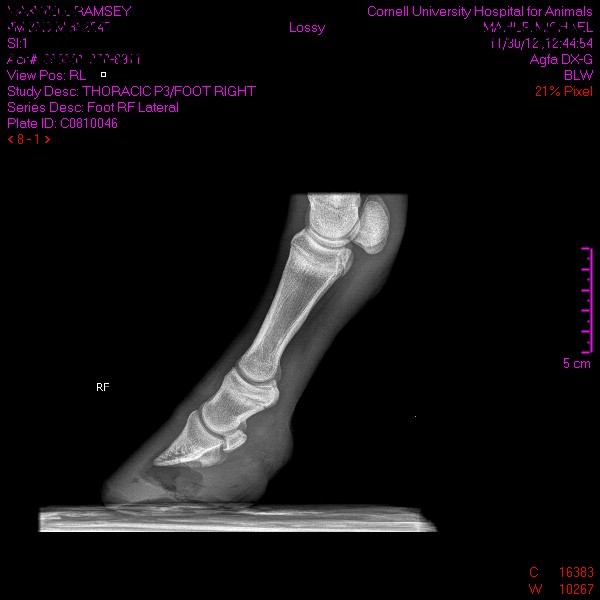 Compare the above image to this one taken on Feb. 25. (this was taken after the farrier trimmed most, but not all, of the foot).   The length of Ramsey's heel is longer here then above, but squashed underneath him.  If you are a horse or donkey owner and you hear the term "underrun heels", this is it.  It makes the coffin bone tip back a bit.  You can also see that the coffin bone is higher up in the foot then it is below.  This can get much worse in donkeys or horses whose feet have been neglected for a long time and allowed to over grow into a slipper shape.  The farrier at Cornell started to correct this, but it will take some careful trimming over time to get this foot back where it needs to be 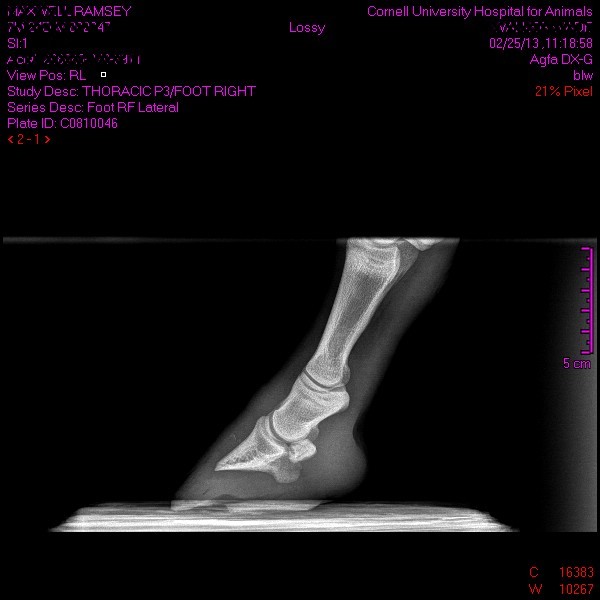 I think this last film is the most striking for me.  You can see at a glance just how much of the coffin bone was removed and is just plain gone forever now.  That won't grow back.  You can also see where the ragged edge of his hoof wall corresponds with the missing bone.  That won't grow back fully either.  It is amazing to me that Ramsey can even walk let alone be out playing in the snow with his mom. 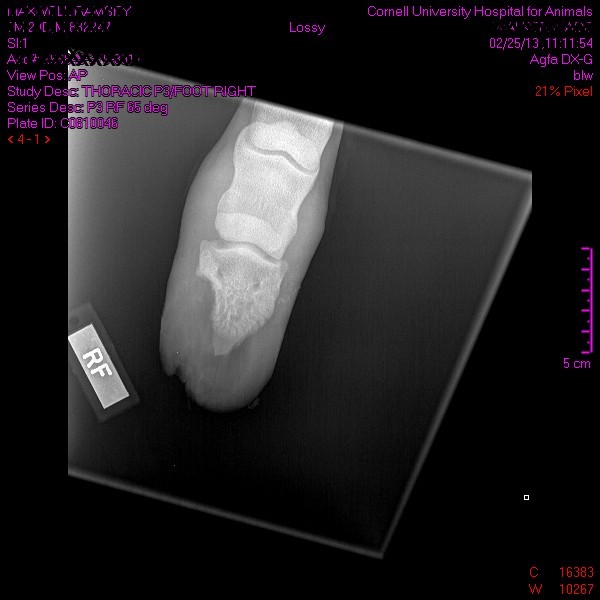 Posted by The Dancing Donkey at 10:23 PM