I know I actually said that having more snow would be a good thing for Ramsey's foot and all, but being plunged back into the frozen wasteland is really a bit much.  I keep seeing pretty pictures of other blogger's Spring flowers.  They are so very lovely and yet I can hardly stand to look at them since it hasn't even made it out of the teens here.  It kind makes me want to go put a pillow over my head.

OK, I'll try to stop whining now.  Just put it down to extreme sun deficiency and the constant howling of the wind.  The one useful part of the unending wind and snow  has been that Ramsey has had no desire whatsoever to over-do on his newly trimmed foot.  I have been leaving the barn gate open all the time for Emma and Ramsey, but it would take a pry bar to get them out of the barn for any amount of time.  A new muck tub has been the highlight of the week for very bored donkeys. 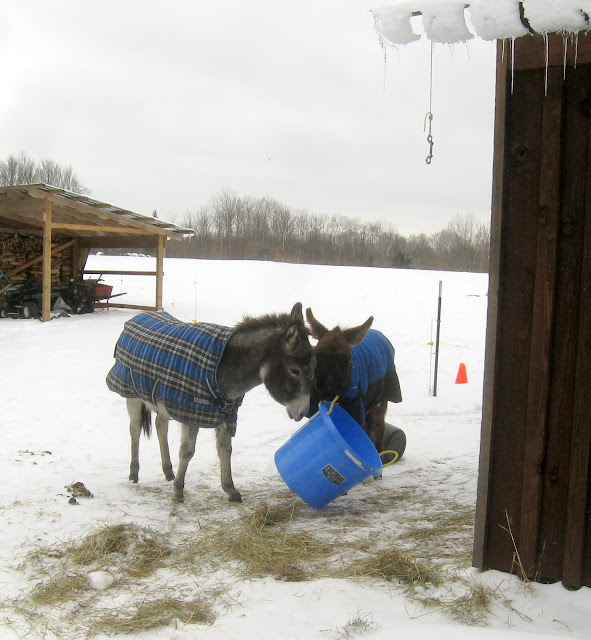 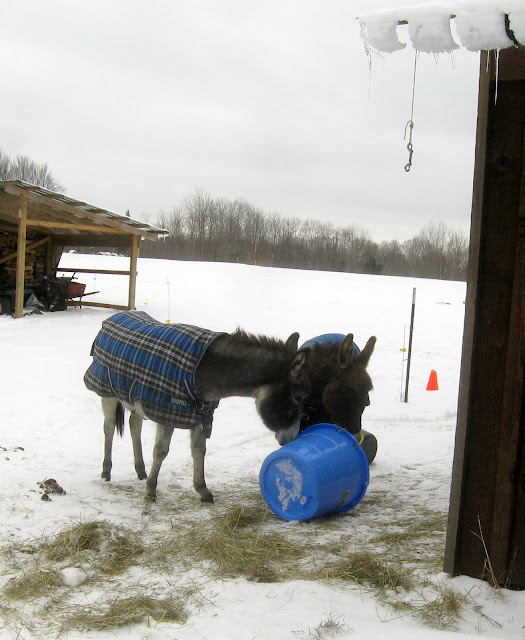 I am still not sure what is going on with Gabe.  Last week, he started acting like someone was stabbing him in the mouth again every time he took a bite of hay.  It could be some sort of sensitivity to something in the hay so I swapped some hay with Riding Buddy to see if that helps.  If that doesn't work, we will have to move on to x-rays and scopes.

Gabe is his own worst enemy in this case because he is an absolute Stinking Hog about food.  He will eat anything he can get in his mouth and he never seems to think twice about it.  Hence, his Hungry Hippo nickname.  Since he has access to food all the time, you'd think he would be a bit more sensible about it, but he isn't.  It is probably what got him in trouble in the first place.

I have been using the small mesh hay nets to slow down and limit his consumption and oddly enough, he does not have as much trouble eating out of those as he does with loose hay or the hay boxes.  I think it is because the net forces him to take little bites rather than just dive in and pig out.  He certainly isn't in any danger of starving as he still manages to consume way more than his fair share of food.  Since he hasn't lost an ounce (which is kind of too bad as he could really stand to lose about 100 lbs), the weather is so terrible and I want to completely rule out the possibility of a sensitivity, I am holding off on more tests.  I will see how the hungry hippo does with different hay and go from there.
Posted by The Dancing Donkey at 11:57 PM