Well, I have learned one thing at least, Emma and Ramsey really are extra special donkeys.  Of course, we all knew that right?  From this exhaustive research, they appear to be the only donkeys with kinked tails (and it was kind of fun to think about people all over the world going out and groping their donkey's tails just to make sure).  However, from Mom L and Donkey Bum we have tail tales of kinked cats and dogs.  Once I thought about it, I have seen this in cats and dogs myself.   What that means and the relation between them all will probably have to remain one of Life's little mysteries.

I keep coming back to the tongue thing though.  Mom L also mentioned a study done on how cats drink and which way they curl their tongues.  I have seen similar studies in people.  The ability to curl one's tongue into a cylinder is genetic and each person either can or can't.  I wonder if horses and donkeys are the same.  I also wonder if Ramsey learned this when he came home from Cornell and desperately wanted to nurse only to find that Emma had almost no milk left.  He would get very frustrated by this and paw the ground, pace back and forth, try to nurse, paw some more and then he would go to the water bucket and try to drink the same way he would nurse....with his tongue sticking out.

So now I am wondering if the tongue out thing might be a learned behavior in youngsters whose mothers are not making enough milk.  That could actually be an interesting study as a means of measuring adequate milk production in mares and jennys.

As for holding water in their mouths after they drink (which nearly everyone mentioned and nearly all equines do to one extent or another) regardless of whether the tongue is in or out, I have always believed that this is because it takes some effort for an equine to work that last swallow to the back of the throat.  You can experience this for yourself by attempting to drink out of a bowl without picking it up and while holding your breath.  That last bit is especially important because equines can't breath through their mouths so they can't suck the water up.  Try getting all the water to the back of your throat while your head is tipped forward and holding your breath.

After you have done that, think about the distance the water has to travel in a horse or donkey.  Just look at Gabe here, there are  probably 16-18 inches between his lips and his throat.  Which is why you really don't want to be standing next to him after he takes a drink.  If he gets distracted by the idea of company, he doesn't bother to stand around and work that water up and in.  He just very happily dribbles it all down the back of one's neck. 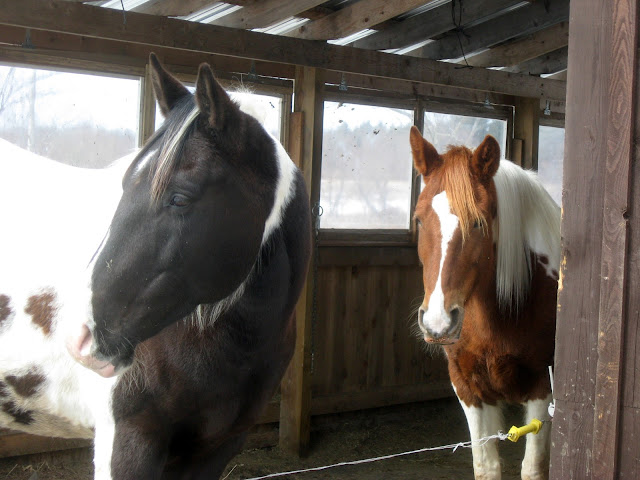 If nothing else, the idea of lots of people sitting at their kitchen tables trying to hold their breath and drink out of bowls without using their hands, is going to keep me smiling for a good long while.  And for Karen, who wants to know why donkeys bray, we'll have to get into that mystery another day.

Posted by The Dancing Donkey at 11:55 PM