A number of people who have donkeys of their own have sent me emails expressing interest in what has happened to Ramsey's foot and how it was treated.  I took these photos yesterday to show you what it looks like and as a way for me to better track his progress.  Since I look at it every day, it can be hard to see progress.


Ramsey had a lateral hoof-wall resection done so that the surgeon could access the coffin bone, which was infected.  About 1/4 of the coffin bone was removed.  There is a fair amount of granulation tissue, but obviously, it needs a lot more.  I am treating this part of his hoof with a chelated silver solution.  I soak a piece of gauze in the solution, put it directly in the hole and use conforming gauze to wrap over it. 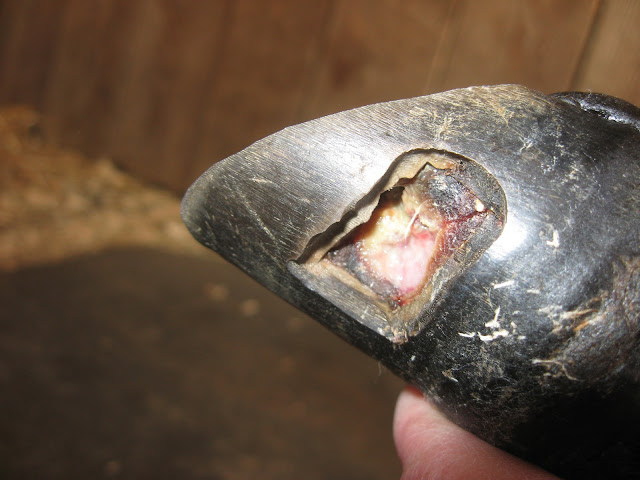 As the hoof grows from the top down, the hole will move farther and farther down toward the ground and eventually grow out.  The resection is causing him surprisingly little pain at this point.  He no longer even flinches when I replace the gauze packing.  Hopefully, when he goes back to Cornell in four weeks, the foot will be healed and grown out enough that they can put an acrylic patch over the hole and eliminate the need for a bandage until it grows out completly.

The most painful part right now is the back of his heel.  You can see, just where my thumb is and at the coronet band above the resection, that the hide is scurfing off where the bandage has rubbed and the abscess broke out. 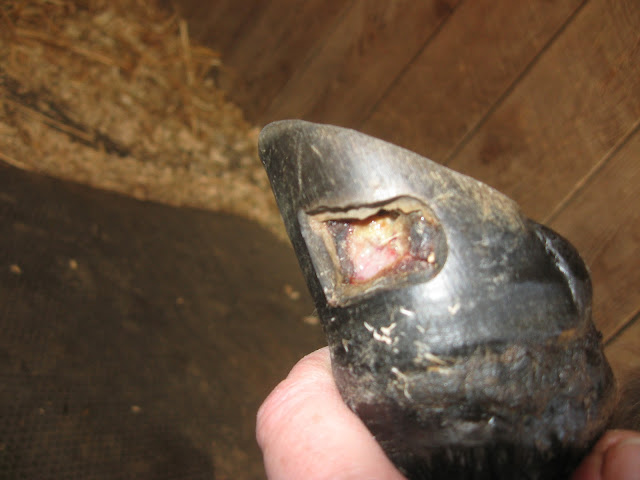 I used a small amount of icthammol on that area and I am going to try some of the beeswax salve that I make.  I think it will provide a protective barrier and help keep things soft.  The foot is in need of a trim, but that cannot be done at this time.

I need Ramsey to stand still and quiet while I change his bandage.  While he does tie fairly well, he is too wiggly without a distraction.  I have found that if I offer him something good to eat, he will stand quietly and allow me to do just about anything while the food holds out.  Since I do not want him overeating and he should not get any grain, I have been giving him a small handful of timothy hay pellets soaked in water (you can get the pellets at TSC).  They are the perfect choice for animals who should not get carbohydrates and I have used them to completely replace the minuscule amount of grain my equines were getting, none of them need grain.  All of them actually like the hay pellets better than sweet feed, which surprised me.  The pellets contain nothing but timothy hay and a small handful keeps Ramsey happily occupied for nearly 30 minutes. 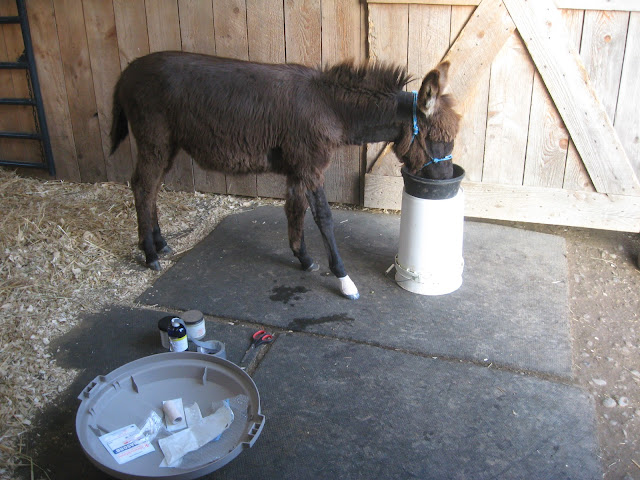 That 30 minutes gives me ample time to get this done.... 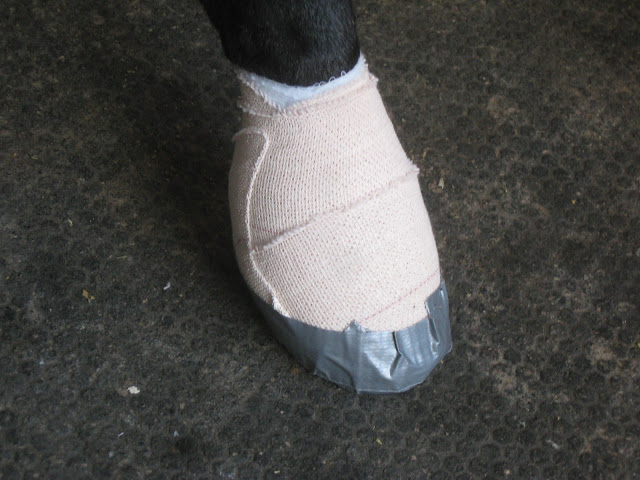