Over the past couple of years, I have been doing a lot of studying of horse and donkey hooves.  I seem to be turning into a farrier, I never intended it, and it's a bit against my better judgement, but as always, necessity propels.  I even broke down a while ago and bought the entire set of Pete Ramey's videos.  If you are seriously interested in learning the real ins and outs of hooves and how to trim them, I would highly recommend these videos.  Just be warned, these are not a quick overview, they are 16+ hours of densely packed, intense information.  They are very well done and easy to understand, but there is A LOT of information there.  I have actually only made it through the first three videos and I had to take a break and work on some real feet in order to process all of it so far.

In a roundabout way these feet are what started this odyssey... 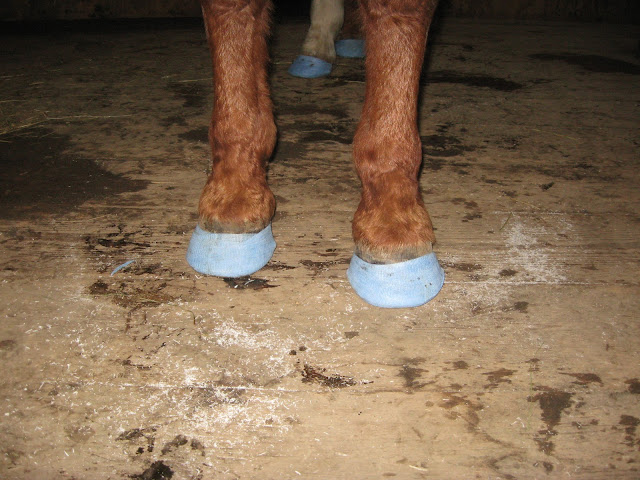 They belong to a wonderful gelding named Hawkeye, who belongs to Riding Buddy.  She has had him a number of years now and has spent the last three years struggling with chronic hoof problems.  I believe that his troubles actually started before she got him and some bad farrier work after that compounded the problems.  He ended up with a severe case of white-line disease, went through a complete hoof resection about two years ago and has been struggling ever since.

In addition, Riding Buddy has three other horses who all started having the same trouble and I started having hoof issues with Tessa and Gabe after they spent time on her farm.  There are a couple of decent farriers in the area that do an OK job as long as they are starting with healthy hooves and there are no problems.  However, if there are problems, they don't know how to fix them.

Thus, the beginning of my hoof odyssey.  I bought some good tools and I started doing things on my own, mostly out of a sense of self-defense.  I made some mistakes along the way.  Mostly, because of self-doubt and being too timid.  Worrying about cutting too much, I often didn't do enough.  In the past six months though, things have really started to come together.  This weekend, I trimmed both Tessa and Gabe's feet and they look great.  All signs of trouble are gone despite the fact that they have been almost completely neglected this past month as I have been overwhelmed with Ramsey's care.

Where we are really finally, finally starting to see a real difference is in Hawkeye's feet and in Riding Buddy's other horses.  The others all have good feet now.  Hawkeye's feet have been trapped in a kind of negative feedback loop for several years, but in the last four months, they have undergone a radical shift for the better.  All he needs now is a relief from the low-level, chronic pain that is keeping him from moving freely, which is what stimulates healthy hoof growth.

Enter the blue casts he is wearing in the photo above.  They are called equi-socks (or equi-casts) and every horse owner in the world should know about these things.  They could save your horse's life one day.  They are made of the same material that a doctor would use to cast a broken arm.  They roll onto the hoof just like vet-wrap, but harden into a solid cast that will (hopefully) stay on for the next four weeks.  A regular shoe can even be nailed to the bottom of them for added support.

Now that Hawkeye's feet are set up for proper growth, we are hoping that the casts will give him enough support so that he can move out soundly and stimulate good hoof growth.  I just put the casts on yesterday and he already seem more comfortable and is moving better.  I am hoping to have good things to report in another four weeks.
Posted by The Dancing Donkey at 9:36 PM