Since Ramsey, and by extension, Emma, are having to be incarcerated in the barn most of the time, I have been trying to find ways to keep them occupied and happy.  The long confinement associated with orthopedic medicine is one of the biggest challenges that equines face when injured.  Movement is one of the most integral aspects of life for horses and donkeys and depriving them of their freedom of movement is one of the worst things we humans do to them.  Even when there is no choice, it is vital to try and alleviate the stress caused by confinement.  Some horses can't deal with it at all and end up being euthanized even though their injuries could otherwise be treated.

Fortunately, donkeys are proving, once again, to be much more sensible and Emma and Ramsey have adapted far better than any horse I have ever known.  Ramsey, in particular, has been amazingly accepting of the necessary confinement, much more so that I would ever have imagined given his age.  Emma gets a bit more frustrated, but she is still being remarkably good about it.

I try to make sure that tehy get to spend several hours each day outside as long as the weather permits and Emma gets to roam around the property as long as she respects the boundaries.  Since she doesn't want to get too far away from Ramsey, this works well and gives her some much needed freedom and exercise.... 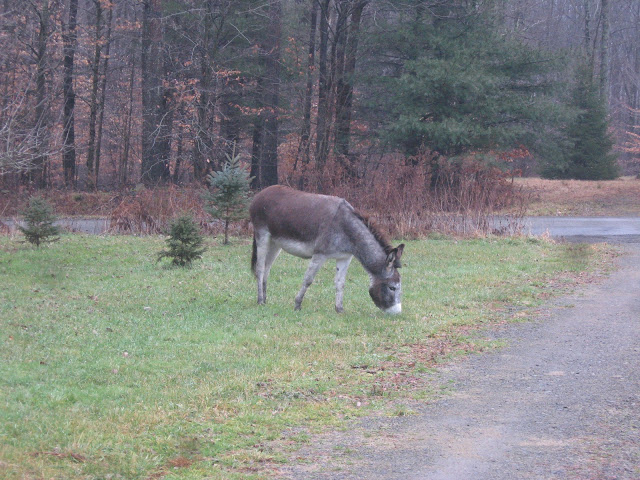 The single most useful device I have found for alleviating confinement stress however, is a small-mesh hay net.  I have always loathed hay nets as they have traditionally been dangerous, suicide enablers in my opinion.  The small-mesh nets are a bit different though, mainly because they are, well, small-mesh.  The old fashioned kind were just the right size for a horse to stick a foot through and I was initially very wary of even trying these newer versions with Emma and Ramsey, especially since Ramsey's feet are so tiny and he loves to chew on ropes.  However, Riding Buddy has been using them with her horses for a couple of years now with great results and after the success I have had with my slow feeder boxes, I decided to give it a try.

I have been amazed at the results.  Keep in mind that I always feed grass hay free choice and my animals have access to hay 24 hours a day so the net is not extending their feed time.  The net seems to provide the constant, slow nibbling and browsing that donkeys are designed for and they enjoy it.  I was astonished to find that after a few days of introduction, both Emma and Ramsey (especially Ramsey) prefer the net over the loose hay.  It is the exact same feed from the same bale of hay and they still have free choice access to loose hay, however the hay net is almost always close to empty in the morning while the loose hay remains untouched.

I have noticed several other things since I started using the net about two weeks ago: 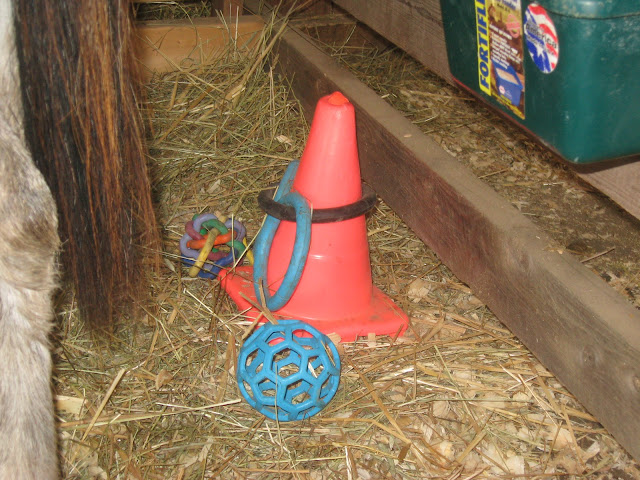 Every day, I pick up the toys and put them in a corner.  Before using the net, I found them all over the place every morning.  I have not moved them in over a week now.  I am not against them playing with toys, far from it, but I have to wonder if the toy-tossing is the result of frustration rather than play.  What I have learned from this...

Posted by The Dancing Donkey at 9:45 PM