Lakota's feet are one of the reasons I have been delving into equine nutrition so deeply lately and have had all of our hay and pastures tested.  While many people would say that his sunken coffin bones are the result of founder, I know that this horse has never suffered an acute laminitic episode.  He has been tested for IR and he is negative, nor does he show any signs or symptoms of IR while Hawkeye does.  Lakota's feet have slowly, steadily gotten this way over time and the alarming aspect of this is that I have seen the beginnings of such symptoms in every horse who has lived on either of our properties for more than a few months, which is why I suspect a nutritional or environmental issue as one of the initial causes of his troubles.  There are a lot of factors at play here, but that may have been the pebble that started the avalanche.
I have the hay test results and one of the glaring issues is the balance between the trace minerals.  The ideal ratio of trace minerals is generally considered to be 4:1:4:4 iron:copper:zinc:manganese.  I don't have the numbers in front of me, but when I did the math, my pasture ratio was in the vicinity of 20:1:5:55.  We have added a high copper/zinc supplement, which has helped, but it is still way off.  I am working on creating a custom mix, but I still need more information.  The levels of manganese in all of our samples were higher than the highest range in the entire Equi-Analytical database and I have not yet been able to determine a safe way of balancing this.  I am still working on it and when I get things figured out more, I will post some of the results and what I am doing about them.
In the mean time, I am still working on the trimming aspect of Lakota's feet and we are making some progress there.  About 8 weeks ago, after the x-rays, I started trimming and wrapping Lakota's feet every two weeks and it is fianlly starting to pay off.  Before that we were seeing some tiny improvements, but mostly just maintaining the status-qua.

I have been looking for ways to stimulate better growth and improve circulation, especially in the back of the foot, which was so horribly weak.  This first photo was taken 4/20/13 and shows what I mean.  The frog is so badly atrophied and diseased that the heel bulbs are actually growing down and under the foot in an attempt to protect the sensitive tissue underneath.  Combined with the paper-thin soles and disconnected walls, it's really amazing that this horse could walk. 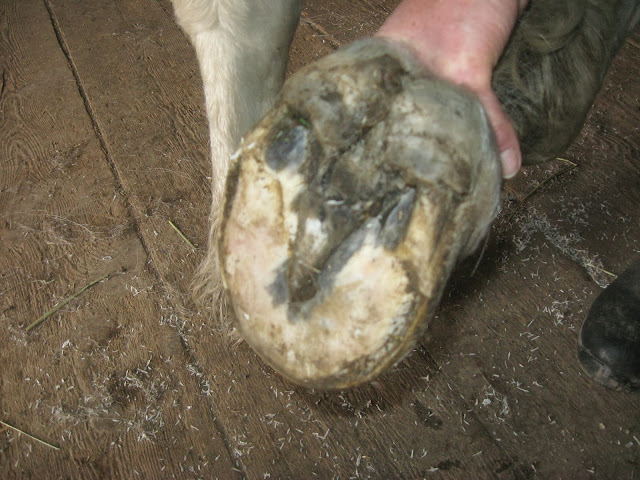 In these next two photos, you can see that we are finally making some real progress.  The one on the left was taken 9/9/13 and the right taken 9/21/13.  On 9/9 we decided to try a product called Magic Cushion made by Absorbine.  It is a hoof packing material with antibiotic/microbial properties, it sort of feels like putty mixed with tar.  I packed it into the entire bottom of the foot and put the casts over it.  Two weeks later there are some good things happening along with a few things I am not sure are good or not.  The things I really like are that the heels and frogs have widened considerably.  In fact the entire hoof has gotten wider and shorter.  If you look closely at the distance between the apex of the frog and the tip of the toe, you can see that the distance has shortened by about a quarter of an inch.   The overall width of the foot from side to side has gained nearly half an inch as has the back of the frog, all of which is excellent.  This was the very first time the the heel buttresses (which are right about where my thumb disappears) had not folded forward on themselves and had instead widened. 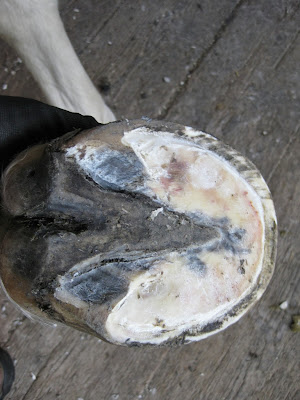 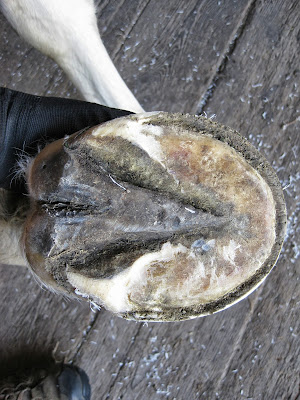 The Magic Cushion also softened the sole a great deal and for the first time ever, there was some dead sole material to remove (note: I did NOT cut any sole back.  I only scraped off the dead material so I could really see waht it looked like.  Don't cut live sole, especially on a horse who only has 2mm to begin with).  The reddish areas that you can see on the right are the bruises finally growing out that you can just make out on the left photo.  They look fresh because they have not been exposed to air before.

This softening of the sole was good and very helpful for the moment, but I would not like to see it any more soft.  I like what the Magic Cushion did, but I wouldn't use it continuously, at least not under the casts in these conditions.  Because of that and because I want to really support and stimulate the back half of the foot, we decided to try this: 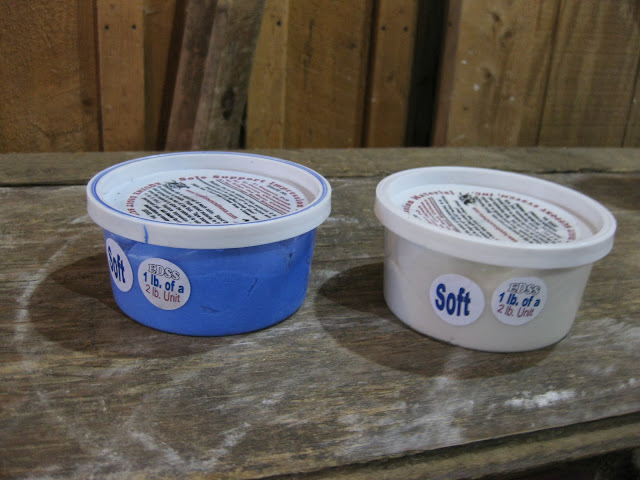 This is an impression mold material.  It is the same stuff that dentists use to create molds of teeth.   Each part has the consistency and feel of silly putty, when they are mixed together the stuff begins to set up into a soft, squishy solid that retains its shape.  I think it is some kind of silicone epoxy, but I don't know anything about how it is made.  It is fun to play with though and I can already think of several different applications that I want to try.  That will take a bit of contrapting though and I need to think about it more.  If my ideas work out, I'll share them some time.  But I digress, back to feet... 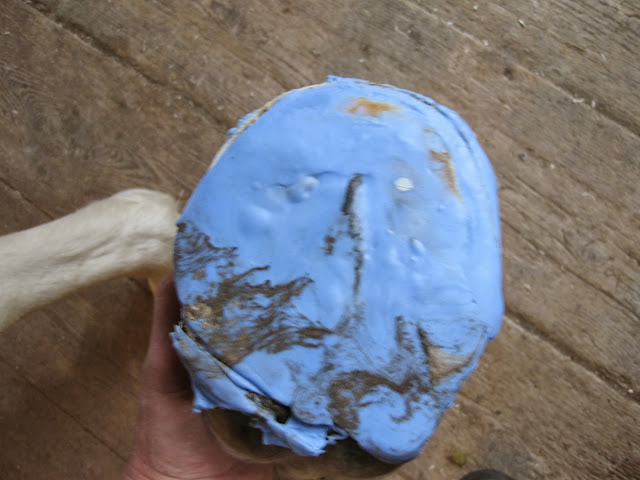 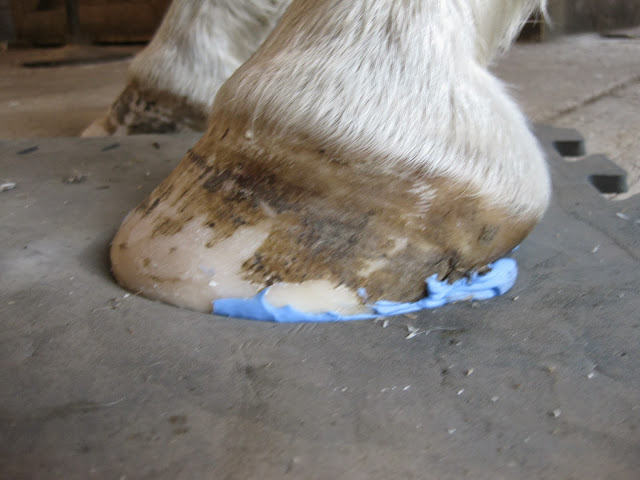 A custom fitted, cushioned orthotic, the toe area is cut out to help remove any pressure from the tip of the poor, abused coffin bone. 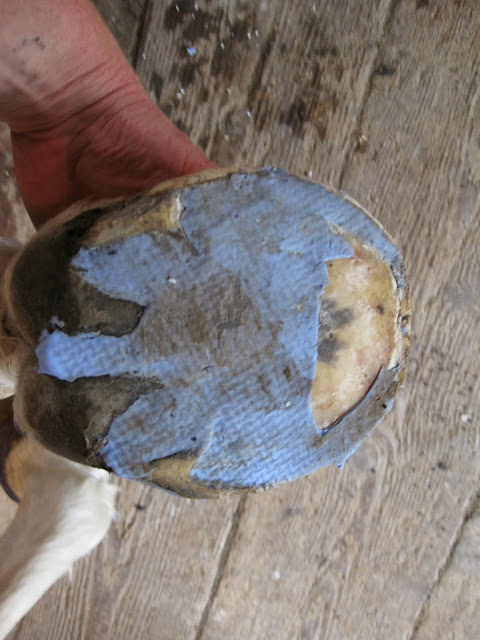 Below is the trimmed foot, with its blue cushion and ready for a new set of wraps, check out how much flatter the hair line is and how much shorter the whole foot looks.  Also look at where the heel tubules end now (they hit the floor just behind where the light colored trimmed portion ends), if you can remember back a few months, they used to be so long they were actually in front of the leg. Now they are just behind the leg, still too far forward, but better... 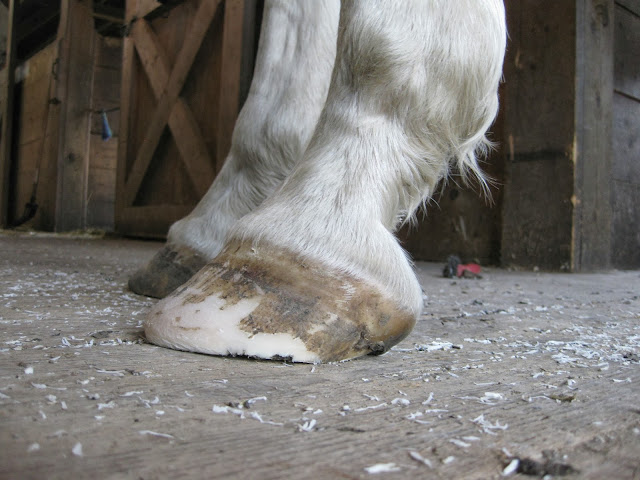 The next morning, the phone rang while I was in the shower.  I could hear RB's voice leaving me a message, but couldn't make out the words.  Because it's the way my mind works, I immmediatly started imagining that she was calling to tell me that her horse was lame and I'd done something terrible to him.  I came out a few minutes later and listened to the message with some trepidation....

"Kris, I just had to call and let you know that Lakota is out here running and bucking and kicking in a way I haven't seen in...in...in...a long, long, long time.  In AGES!  He hasn't stopped running in the last half hour..."

That's a good way to start the day.  I can't wait to see what these feet look like in two weeks.