I did a stupid thing this afternoon.   I'm gonna blame it on the annoyingly persistent low-grade fever I've had all week, my mind is not where it ought to be.  When the donkeys and I were out walking in the woods today, I made a wrong turn and before I stopped to think about it, we were in the middle of the hemlock swamp.  An area of wet ground, dark pools, rotting fallen trees and treacherous, deceitful footing.   There is a path of sorts and Tanner and I walk through there all the time, but a path through a tree swamp that works for a foolish woman and a border collie is no place for hooves.

By the time I realized my mistake, going back was nearly as bad as going forward.  I turned to my donkeys and told them, "we can do this, but you have to stay close and be careful".  And they did.  Emma followed me and Ramsey followed her.  Carefully, watching and placing each foot in just the right spot, never panicking when the right spot turned out not quite so right after all.

The end of the swamp is marked by a little ravine, not big, but a steep, slippery drop down into a rocky, slippery streamlet.  All the books will tell you that donkeys don't like crossing water and mine were none too pleased with the idea.  I showed Emma the path down several times, she watched and worried, pacing the edge several times and then I asked her to trust me and take the leap.  And she did.

Ramsey thought about it briefly, followed after and then it was through one more little ditch, around a dead tree and we were on solid ground once more.  When we got home, Emma took the lead, heading straight for the best apple tree.  I willingly and gladly followed, trusting her to know best.  Those were well earned apples. 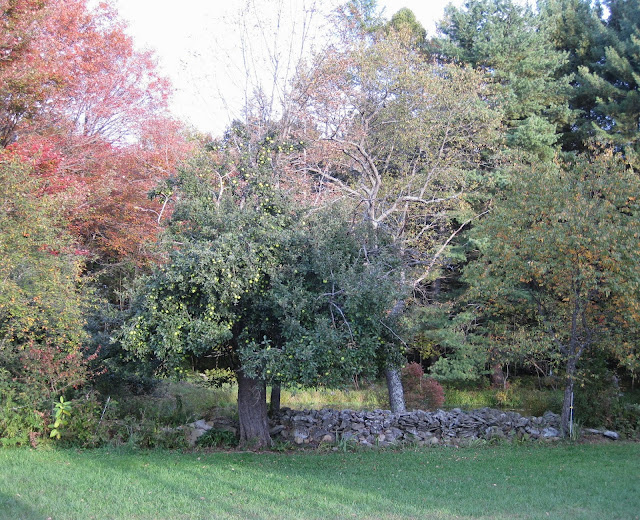 Posted by The Dancing Donkey at 10:36 PM