Notes From the Farm

First a bit of blog-keeping.  I have heard from a number of people that they are having trouble commenting on the blog and I know I have had the same trouble on other blogs.  I did get a notice from Blogger that they are no longer supporting Open ID for comments. I'm not sure what that means except that the problems are coming from Google themselves and I have no way to fix them.  If anyone has any ideas, I'd be glad to hear them.

If anyone would like to reach me for any reason and can't get through on the comment section, my email address is:  aerissana at gmail dot com.

Ben is MUCH, MUCH happier today after his haircut.  It was very hot and humid here today so he is still warm, but not sweating.  It is supposed to cool off soon so I am going to hold off on shaving any more off of him for now. He has been rather grumpy the last couple of weeks, but getting rid of some extra hair has cheered him right up.

It can be so hard to understand what our animals are trying to tell us even though they put huge effort into communicating with us.  I won't pretend to understand even a tenth of what the donkeys try to tell me, but I do know that a donkey who is grumpy or unhappy is a donkey with a problem.  Next year, I will know to get the clippers out at the first sign of grumpiness.  Ben and Ramsey had a long game of tug-o-war this afternoon despite the heat so I know he is happy.

I am glad I listened to Ben and gave him a haircut, even if it is a bit crooked.  A friend told me the other day that the difference between a bad haircut and a good one is two weeks.  Ben will probably look quite spiffy in two weeks.

I guess I need to put a set of big clippers on my Christmas list.

Albert is doing really well and has settled in nicely.  I have been working on handling his feet every day and I can now pick up all four without issue.  I did trim them a bit, but he still gets nervous if I have tools in my hand.  The thing with his feet was accidently trained into him by his previous farrier who just assumed donkeys are hard to deal with and always manhandled him into submitting. Al doesn't want to fight with me, but that is what he expects from farriers.  He is an obliging sort so if a fight is what you want, a fight is what you will get.  It is just one of the many reasons I learned to do my own hoof trimming.

Elva is down to just ONE puppy who has not gone off to his new home yet.  He will be leaving on Thursday for a very lovely small farm to help out a three year old Maremma female.  All of the puppies have gone to great homes on small farms, but Elva is already suffering puppy withdrawal.  By the end of the week, when little Sammy leaves, she may need hospitalization.  Does anyone know of a good Puppy Rehab Center? 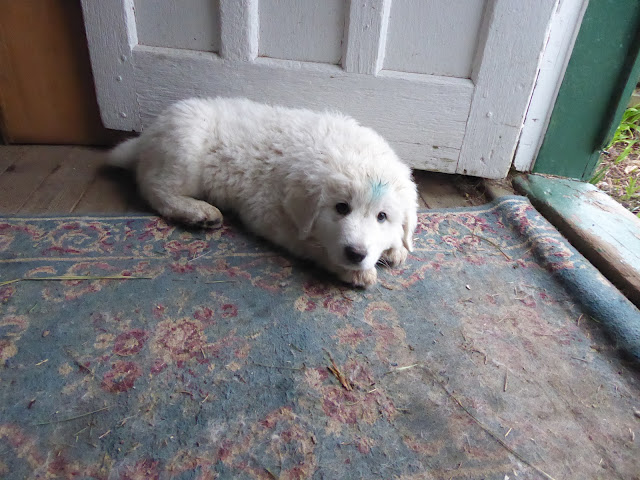 Posted by The Dancing Donkey at 12:59 AM