State of the Farm(s) Address - part 1

I am sooo behind on blogging.  But, I am on vacation (yay!!), and I am going to try to get caught up a bit.  I have a million projects to do and much to catch up on so I barely know where to start.  At the same time, for my own sanity, I have to limit the how much time I spend thinking about all the horrific fires, floods and hurricanes so many are facing right now.  I am not oblivious or insensitive to what is going on, but I am powerless.  All I can do is focus on the problems I can address and pray for the rest.

When you don't know where to start, you should just pick up a tool and do something.  They say that 80% of any job is just starting it.  I have always found great truth in that and it is true for writing as well.  So.....We'll start with Farm Buddy's farm:

We thought Katerina the llama was going to have a baby this year, she was supposed to.  However, we waited all summer for a space alien baby to appear, but the mother ship never arrived.  Farm Buddy had been hoping for a little llama to keep Katerina company and grow up here to be the next generation of sheep guardian, but it is not to be.

Katerina seems very happy and content now regardless.  She is very attached to the sheep and does not appear to be lonely.  It certainly has not impaired her ability to stand on three legs, scratch her belly with the fourth and still keep a sharp eye on the horizon.  Better coordination than I have. 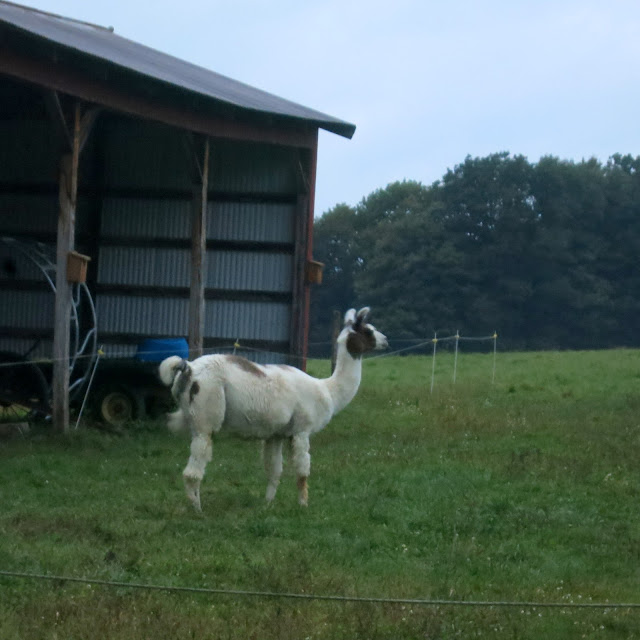 All of the lambs and calves were born with no problems this Spring with the exception of one calf.  He appeared healthy and beautiful at birth, but he did not thrive despite all efforts to help him.  He was a beautiful black angus cross who died about a week after birth.  That was a very hard blow, both economically and emotionally.

This happens to all farms at some point.  Not all babies live and that is just a hard truth.  To the massive Agri Business "farms" of today (I hesitate to even use the word farm in that context), the loss of a single calf is nothing.  They factor in an expected percentage of losses every year and think no more about it.  To a little farm like this, where every animal has a name and is valued, it is a sharp blow.

The rest of the calves are thriving though and growing like weeds.  These two chubs were about two months old when I took this photo. 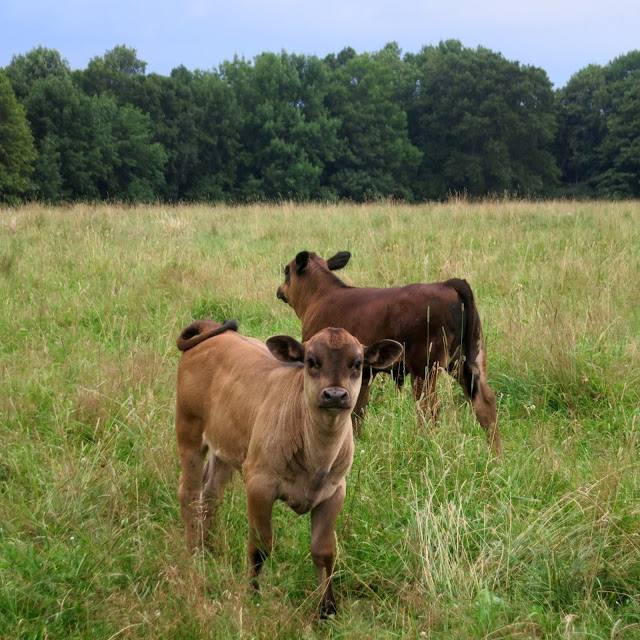 They, and the rest of their gang of thugs, are always looking for mischief.

Jane finally had her baby about a month ago.  She was very late because FB had trouble getting her bred last year.  Jane turned into her normal Crack-Head crazy self and once again rejected her calf in favor of fixating on FB.  Jane is one strange cow, but FB is addicted to milk and Jane is addicted to being milked so it is just a typical, modern-day, co-dependent relationship between two addicts.  Dysfunctional, but it works.

Her calf, at just a month old, is nearly as big as the others and is usually the leader in any trouble so being orphaned has not done him any harm.  (Sorry for all the blurry pictures.  I've just about killed this camera and it is having a great deal of trouble focusing these days, just like me.) 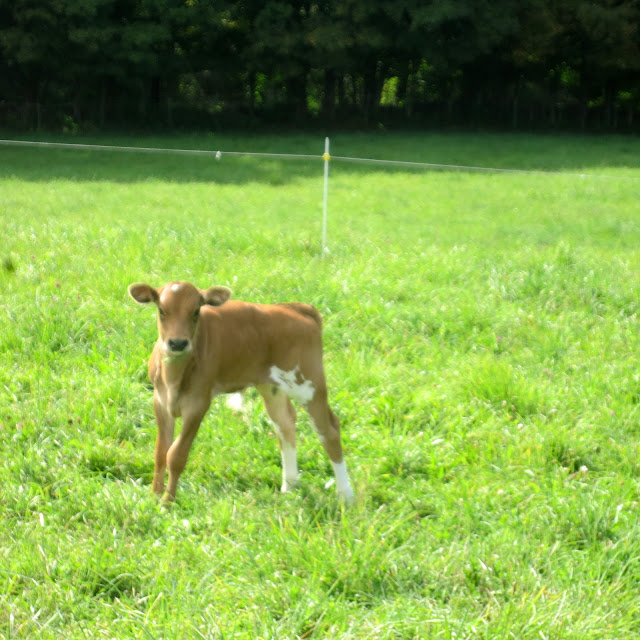 The lambs are doing well.  We've had so much rain this year, that the grass kept getting more mature than the sheep like and they all lost a bit of weight for a while.  However, we finally got some sun in the past few weeks and the pastures got mowed.  The cooler temps and the shorter grass has them all happy and fat once again.

There were several sets of triplets this year and FB gave one of each set (all but one set anyway), to a woman who has wanted to start her own flock.  Those three bottle babies landed in the lap of luxury and have become beloved pets.  She has been teaching them to walk on leash and, when that doesn't work, her lovely Border Collie keeps them in line. 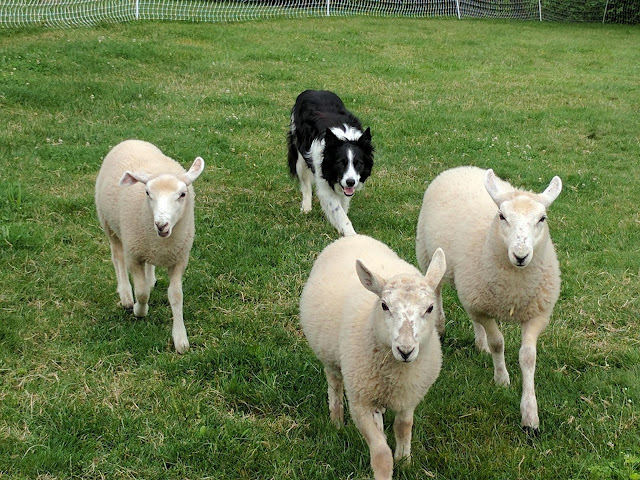 The full set of triplets that remained here are all noticeably smaller than the rest of the lambs, which proves that pulling one baby from each set to raise on a bottle really is better for everyone.

FB raises 100 meat birds every year.  For most of the summer months, they are under foot just about everywhere you turn. 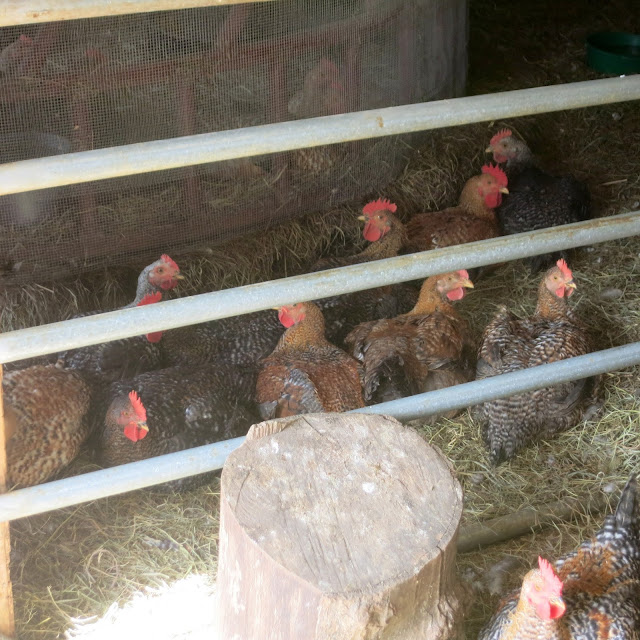 They have free range of the property and FB dotes on them while they are here. 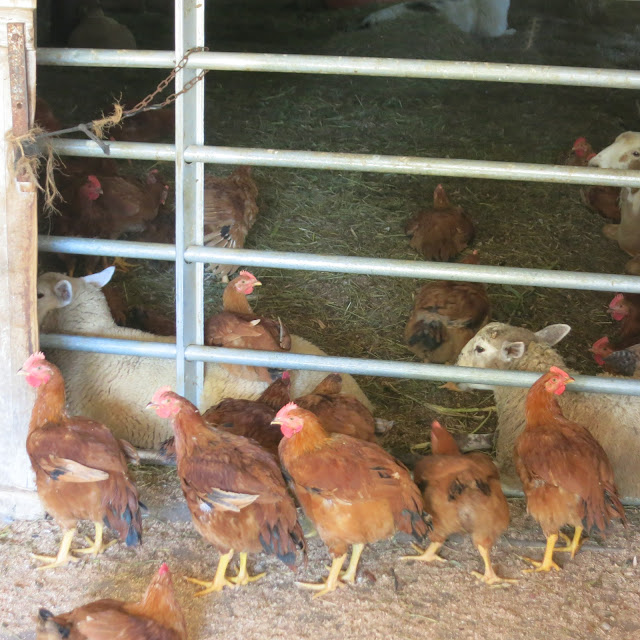 They find that wool makes a very comfy mattress. 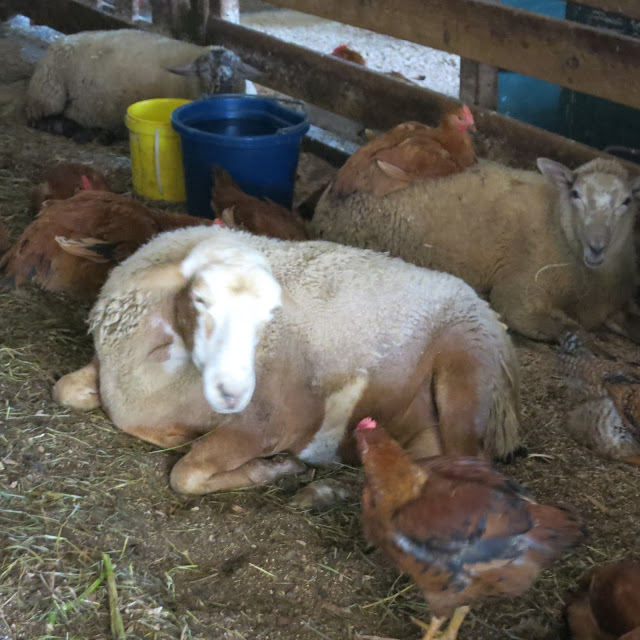 They, and the sheep, all like to hang out in the cool barn during the heat of the day. 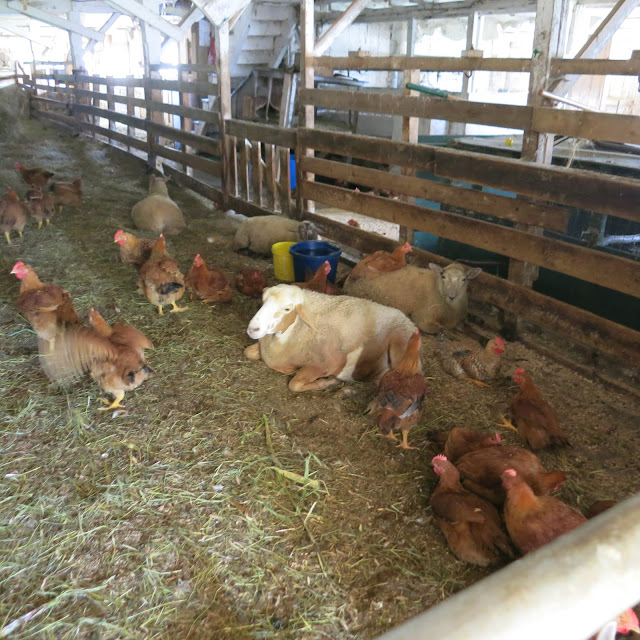 This Saturday is chicken processing day.  These birds are raised for meat and even if they weren't, they would not live much longer.  These are not GMO birds, but many years of selective breeding has made them mature large and fast and have short lives.  They are not the really freaky Frankenstein (Cornish Rock) birds most people raise for meat.  Their legs don't break under their own weight, they are more active and they do more than just sit and eat like the Cornish meat birds we dislike, but they are meat birds.

Since they don't live long, FB makes sure that they, like all the animals, live really well while they are here.  We are also very lucky to have a mobile processing unit that comes right to the farm so none of the animals ever has to leave here.  No one ever has to get loaded on a truck and transported across country.  They grow up here, living on green grass, sunshine and real food.  Their end is extremely swift and free of pain or stress.

We believe that it does not matter what you eat, but how you treat it that matters.  That applies to everything, whether it is a chicken or a turnip. 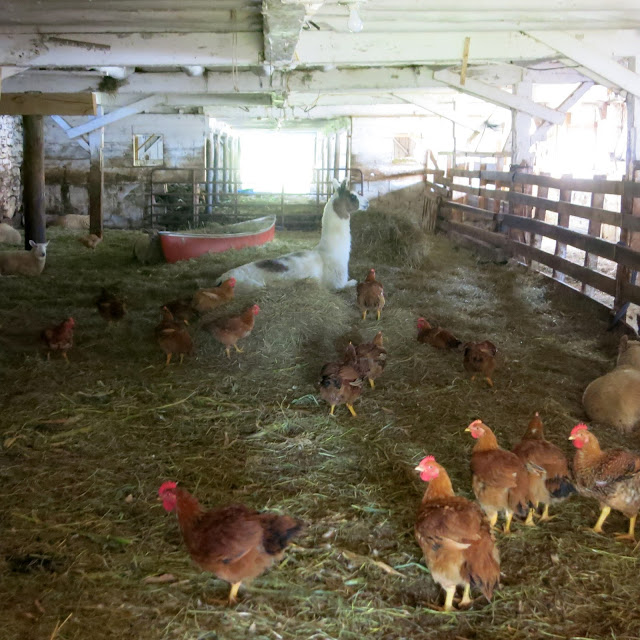 I'm sure I've left a great deal out, but it will have to wait as this is already too long and the Border Patrol is yelling at me. 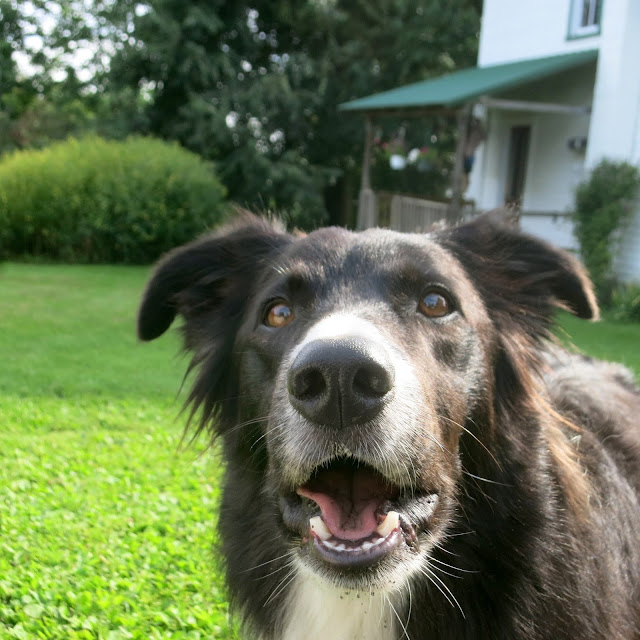 Posted by The Dancing Donkey at 12:40 AM