After my rather disastrous attempt last year to take up beekeeping again, I decided I'd had enough and gave up on it.  Keeping bees in this climate is expensive and heartbreaking.  However, the empty hives have remained sitting out in the field for two reasons:


Every now and then I'd wander past the hive looking for a bit of activity.  Every time I failed to find any, I'd quickly turn away and revert back my procrastination therapy.  It is now very late in the year for swarms and I had quit bothering to even peak occasionally at the hives.  I was even starting to form some semi-coherent thoughts about getting rid of them.  Then, early this week, I drove past them on the ATV and thought I saw some activity around one of the hives.

I stopped to check it out and, lo and behold, there be bees! 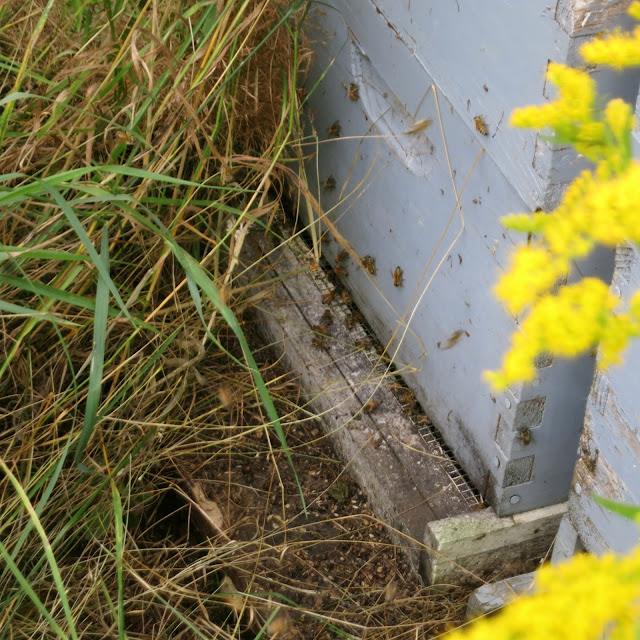 I haven't done anything more than pull some of the weeds from in front of the hive, but it seems to be a very large swarm that has taken up residence.  They are bringing in goldenrod pollen and rather frantically gathering food.

The hive appears to be robust and very active, but a late summer swarm like this faces a truly daunting challenge to gather enough food for the winter and raise enough young bees to survive till spring.  August swarms seldom survive and most beekeepers would combine this swarm with another hive to improve the chances of survival.

I have no other hives to combine them with so they are on their own.  This hive had large stores of honey left over from the hive that died last winter, which is no doubt what attracted this swarm in the first place.  I hope that this leftover honey will give them a much needed boost and a chance to make it.

These bees had to come from local stock who have survived well enough to reproduce, so I am hoping they will be tough enough to make it here on Hellwind Hill.  I've decided to maintain my hands-off approach and just leave them to it.  I will erect a new wind break for them since they don't stand a chance without it, but otherwise, they are on their own.  They are either survivor stock or they aren't.

This may sound harsh, but I've found that trees and plants that need coddling and care from me never survive the winters here.  The plants that are tough enough to live through drought, flood and freezing are the only ones that make it.  There is no amount of help that I can provide to make them grow if they aren't strong enough to do it on their own and I am not strong enough to keep throwing my energy at lost causes.

The bees are going to have to do the same as the trees because I know that if they can't survive without help, then they never will.  I'm sticking with my original plan to avert my gaze and hope for the best because only the strong survive.
Posted by The Dancing Donkey at 2:41 AM