The latest building project is intended to be a storage shed for machinery.  The shed I just built the giant door for was also intended to be a storage shed, but as soon as the walls were up, I changed my mind and decided to put hay in it instead.  This shed is going to hold all of the stuff that the other was supposed to plus have room for my tractor.  That will (hopefully) free up space in the overhang attached to the barn for Ben's cart and let me use that area as a sort of work shop for various other projects.  It is also a nice space to be able to trim feet or work with one of the donkeys one-on-one.

I've learned my lessons the hard way about digging holes up here so I decided to rent a mini-excavator for a day.  I've never operated one of these before, but I knew it couldn't be all that hard and it just happened to be available last weekend so I went for it. 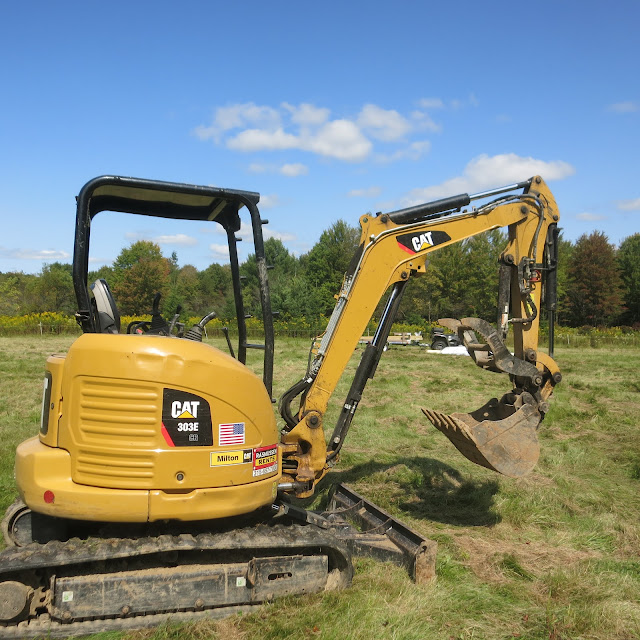 The first hole was the hardest because I was not familiar with the machine and because I hit some big rocks.  Digging up here is really tough.  The first 8-10 inches is not so bad, but then you hit hardpan mixed with shale and boulders.  Even with this machine, it was hard going.  You can't really dig holes so much as carve them out.

I know a lot of people, especially women, are intimidated by heavy machinery, but you shouldn't be.  Modern equipment is easy to use, requires no strength and is a tremendous leveler.  Every woman I know could operate this machine.  Everything on it is controlled by the hands.  The left joystick makes the arm reach forward and back and left to right.  The right joystick makes the arm lift up/down and tips the bucket forward and back.  The two levers in the front make the machine move forward/back and steer.  There is one lever on the right that raises and lowers the blade.   That's it.

It does take a little practice to get everything coordinated, but it is not difficult.  The thing I found the hardest was filling in the holes after the posts were set.  That takes a degree of fineness and a lot of caution, because you really don't want to accidentally knock over one of those carefully placed posts while you are trying to fill in its hole.  I speak from experience when I say that doing so can lead to an extreme swearing fit.

I did find myself trying to give the machine leg commands like I do on my horse.  That was, of course, highly ineffective and caused me to get very tense and possibly swear some more (it's a good thing no one could hear me over the noise of the machine).  Once I realized what I was doing, I made myself relax and focus on my hands.

I can actually see where operating one of these could be a good exercise for riders as it forces you to focus on both deliberate and subconscious cues.  The machine does exactly what it is told and only that.  If you don't give the proper cue, you don't get the proper response.

The other issue with digging holes up here, that has caused me no end of trouble, is this.... 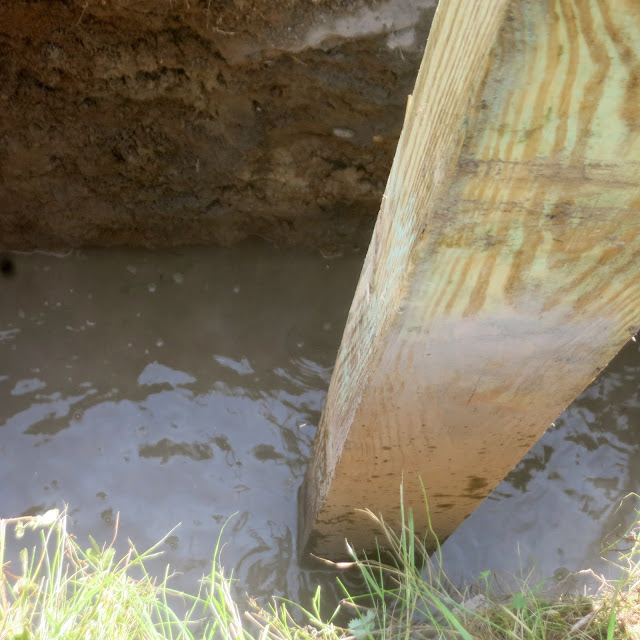 As soon as you dig a hole, it fills with water.  If the ice gets into the ground far enough in the winter to freeze that water, then the posts heave, hydrants fail, pipes freeze, etc.  I dug all of these holes five feet deep.  If the frost gets that deep, we're all going to be frozen to death anyway.

I used 4x6 posts instead of 6x6 because they are adequate for this job and I can just barely manage to move them around on my own.  Two inches does not seem like much, but the weight difference is all out of proportion to the size. 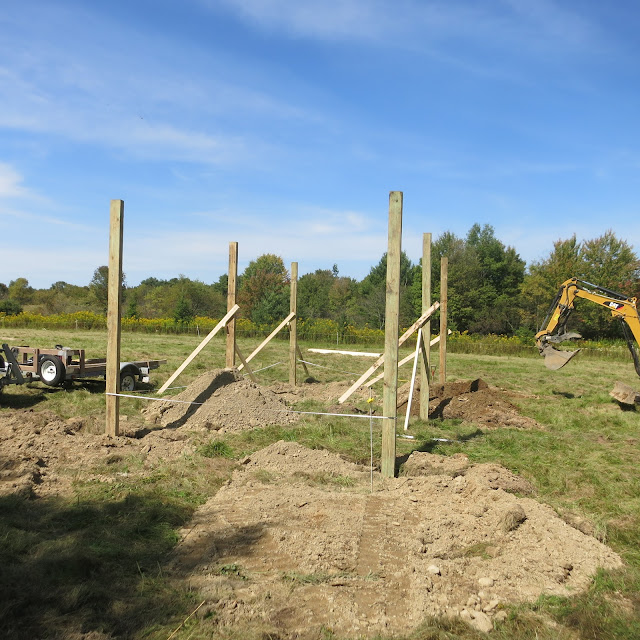 This shed may seem like it is out in the middle of nowhere, but in reality, it is just behind the barn, almost exactly opposite the hay/wood shed on the other side of the barn. 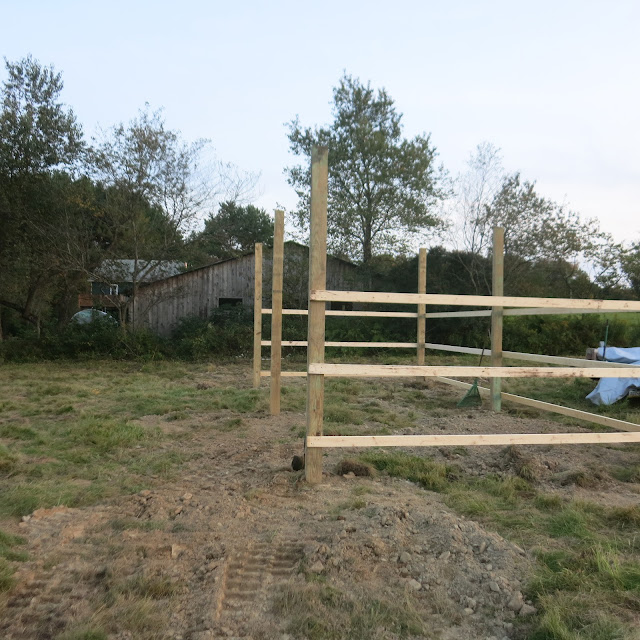 Once I had the posts in the ground, the next really hard step was to get the headers put up, which are these 2"x12"x12' boards that weigh approximately 12,000 pounds.  At least they do when standing on a ladder trying to lift them up by myself. 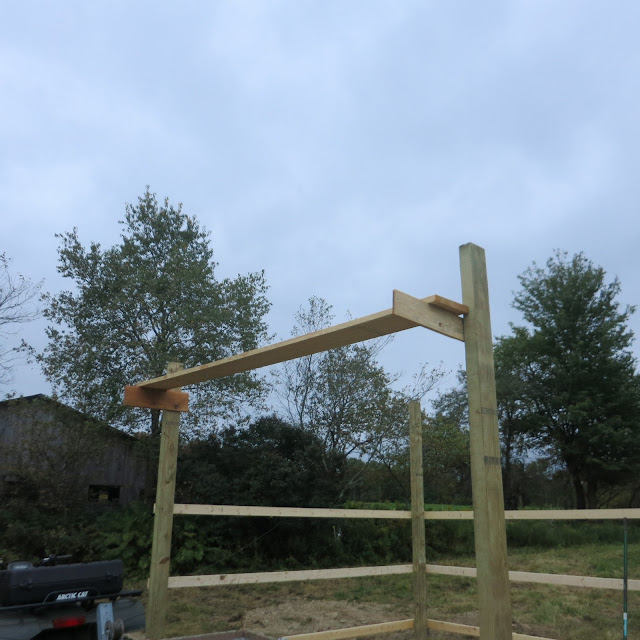 I had to get a little creative to put these up.  I put some temporary "arms" up to hold the board in place and had to put the ladder on the trailer in order to reach high enough. 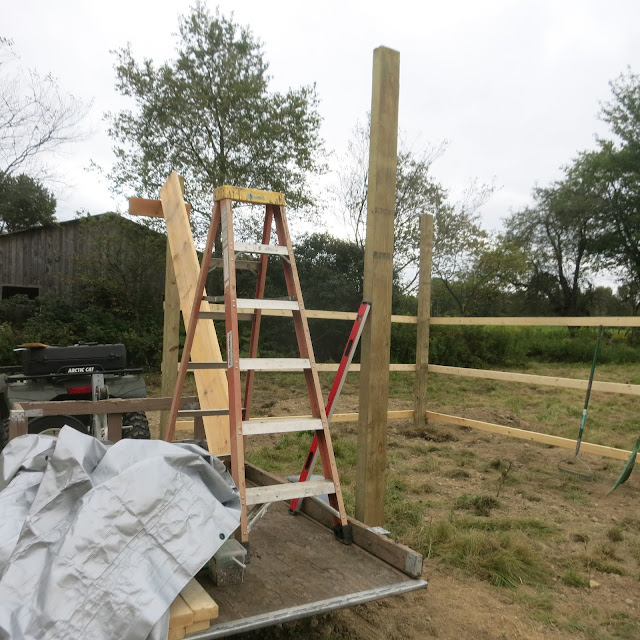 I had a couple of iffy moments thinking about getting squished and wondering if I belong in a padded room, but it worked in the end.  Once I got the system figured out, the rest went up relatively easily. 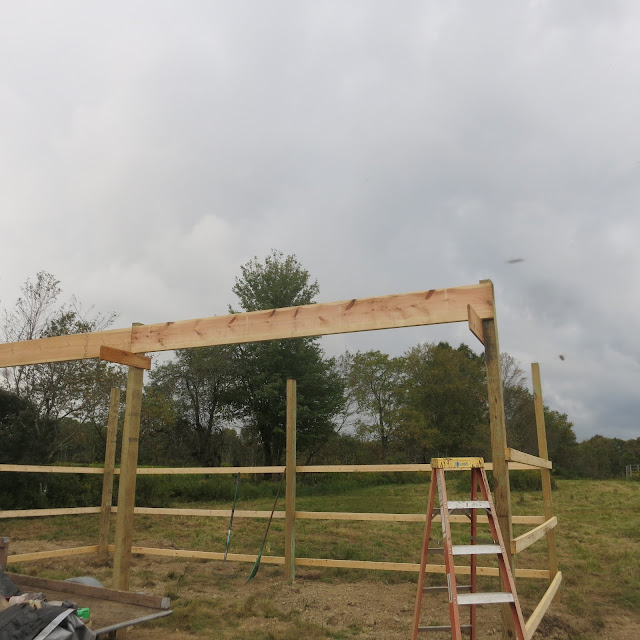 This will be the back of the building... 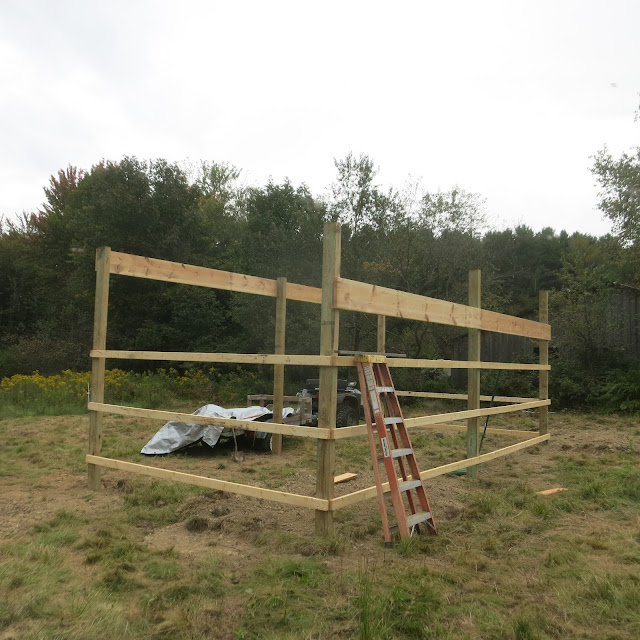 The front will remain open.  The overall size will be 12'x24' and the opening is about 9 feet high.  The next step will be to put up the rafters, which should be easier than the headers since the headers are already there to hold the rafters up for me.  The rafters are also lighter.  After that, purlins across the rafters, metal roof and siding will go on last. 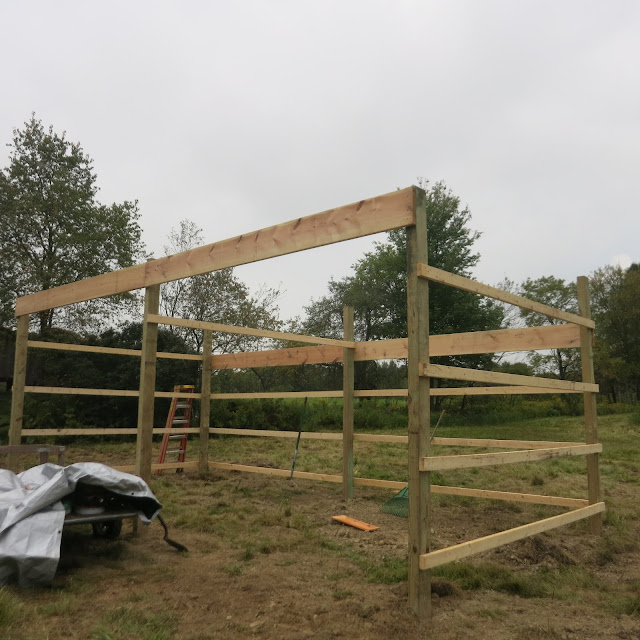 I thought long and hard about putting this shed up, mostly because it seemed like too much work that I didn't want to do.  I kept trying to come up with some easier, cheaper option, including a greenhouse type structure.  However, every winter I commute to work and see so many carports, portable buildings, tent-like structures, etc. that are crushed by snow, blown over, or collapsed because of improper construction and it always makes my teeth hurt.

I figure that this building will cost about $1500 when it is all done and it doesn't take that much more effort.  Building a temporary structure probably requires just as much skill and swearing.  Most of those carport things cost more than $1500 and don't last.

I probably need therapy, but I find that I just can't make myself do that.  So, tomorrow, I will probably be out behind the barn trying to remember how to cut the notches in the rafters and further exceeding my quota of swear words.