I kept the guineas (who I have taken to calling the Freaky Five) locked up in their deluxe accommodations for almost a week, which is the amount of time we had been told it would take them to learn that this is their new home.   Saturday afternoon, I decided that it was time to see how they would do out in the world.  I opened the door and left them to it. 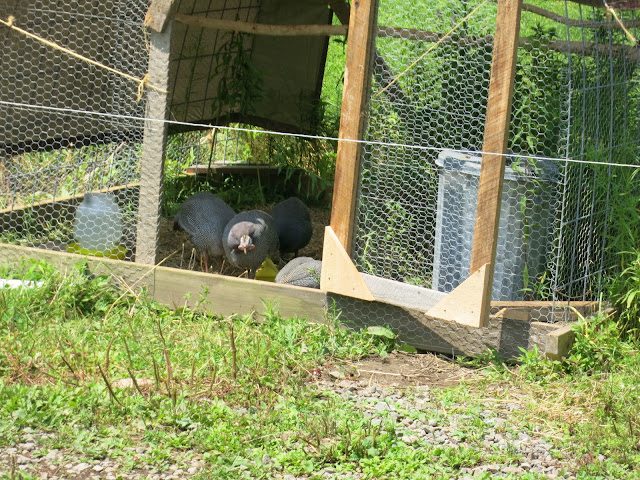 An hour later, they still hadn't figured out the open door concept.  I probably should have put something solid around the bottom of the pen because I don't think they can see the wire very well.  They seem to have incredibly sharp distance vision, but the wire is a barrier that they either can't see well or just don't understand. 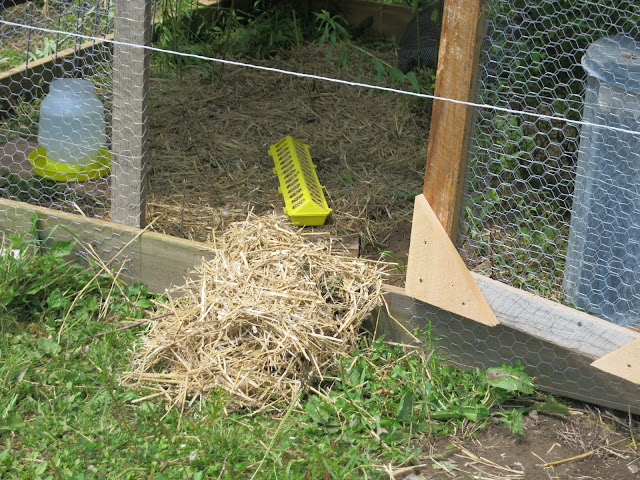 ....and they were soon out and about, although not without a certain amount of drama when two came out and the others couldn't figure out how they did it. 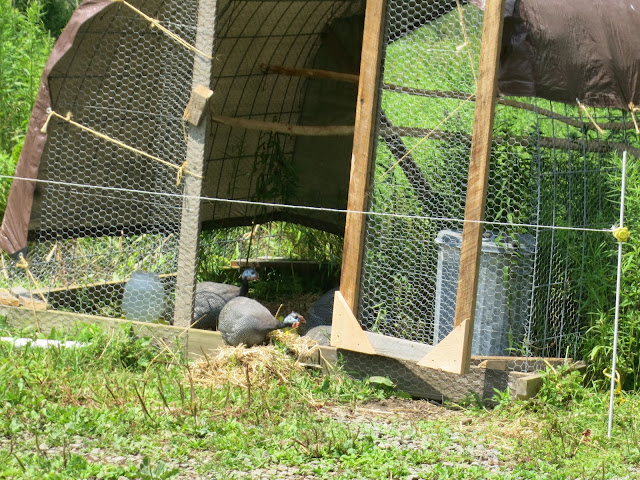 Finally reunited on the outside of the pen, they promptly disappeared into the weeds.  I wasn't sure I'd ever see them again, but they reappeared several hours later and went back into the pen for a short nap.  At least they have that part figured out.  Today, they started exploring the open country. 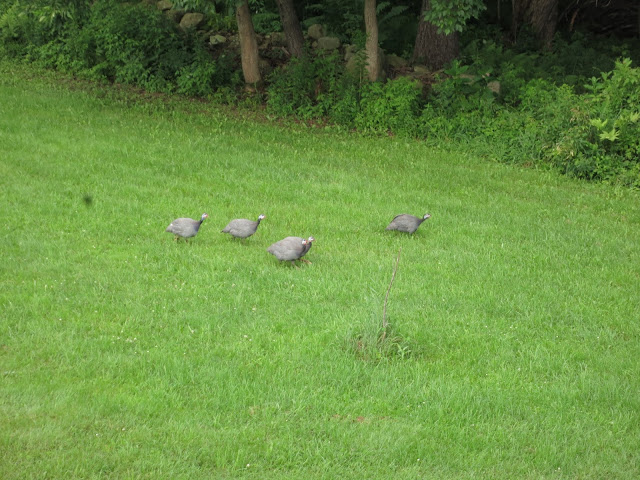 They do love stone walls. 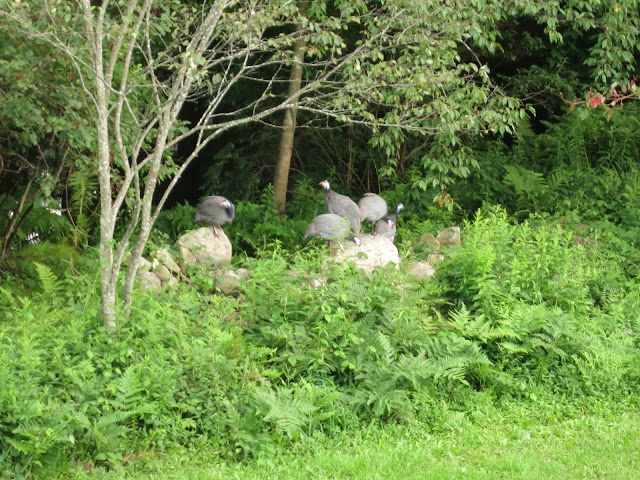 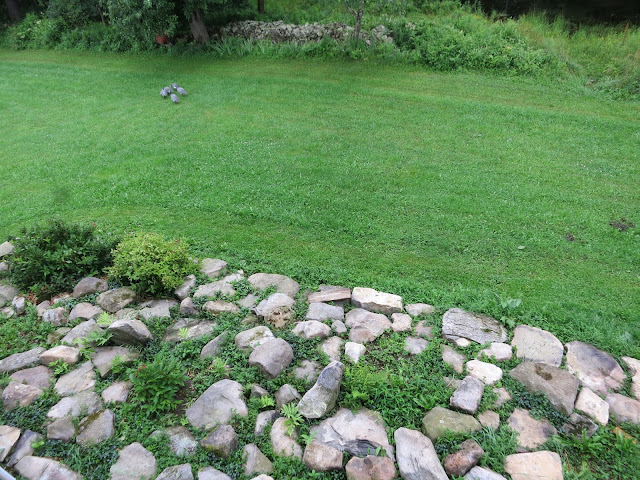 I was very interested to see how Tessa and the donkeys would react to them.  A lot of horses are afraid of chickens, but Tessa barely even looked at them.  It is horribly hot, humid and buggy and Tessa couldn't be bothered to care about guinea hens when there were evil flies trying to ruin her world.  Tessa is the least spooky horse I have ever known, not much fazes her, but she HATES bugs.

I was a little more concerned about the donkeys and we definitely need to do some work there.  I have seen Emma chase wild turkeys and other birds out of the pasture.  I was hoping that seeing the guineas in their pen all week might make her feel more charitable towards them.  Not so much as it turns out.


Don't get too worried about the donkeys chasing the guineas though, the guineas have already figured out to stay away from the donkeys and, as long as they keep their distance, the donkeys don't mind them.  I am working with them to get them to be a bit more accepting and I think they will be with a little time.  Donkeys don't take well to having odd creatures move into their territory, which is why people use them for guard animals, but they get used to strangers with a bit of time.  They put up with Kipper darting around under their feet after all.

Speaking of Kipper....one of her new favorite pastimes is guinea TV, especially when she can make them freak out by starring hungrily at them.  Cats.  *sigh* 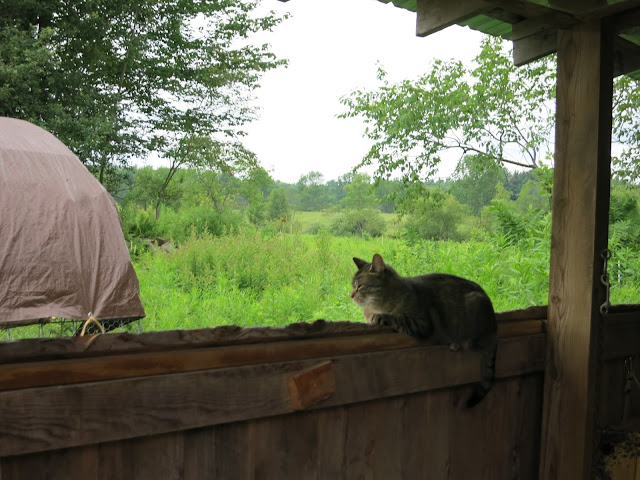 As for Connor, he gave them a look and decided they were uninteresting.  As soon as he turned his back on them, they spun around and chased him. 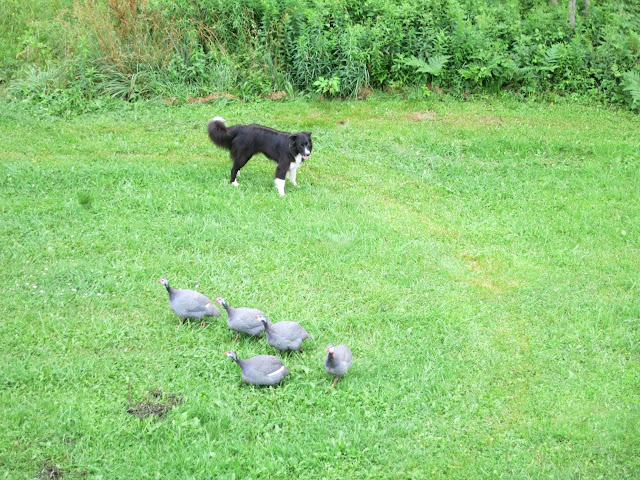 Inter-species relations take time and patience.  Unlike humans though, animals generally work it out in the end. 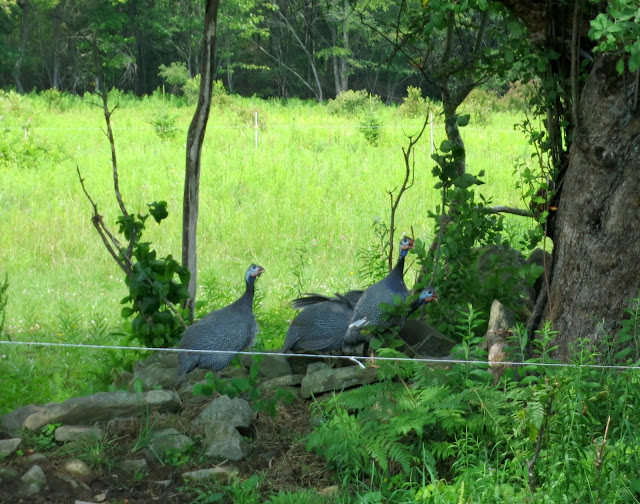 Posted by The Dancing Donkey at 2:47 AM