Do you remember, a while ago, I mentioned that Ramsey had acquired a juvenile delinquent behavior of pawing at the feed room door hoping it would make breakfast appear faster?  I usually deal with these kinds of things by pointedly ignoring it and only offering up the feed dish when it stops.  It generally only takes a few days for even to worst case to start getting the idea.

Despite the fact that Ramsey is maybe the fastest learner I have ever worked with, he just wasn't getting this concept and it wasn't because he didn't understand.  He just didn't want to stop doing it and spoiled baby that he is, couldn't get past that.  He likes digging holes.  The digging does seem to be a donkey thing and the crater he was making in front of my door was reaching epic proportions.  His pawing was starting to turn into less a demand for faster service and more of an obsessive compulsive thing similar to weaving or stall walking.  He would do especially if he got frustrated by something.

For example, Emma quit feeding him months ago, but poor baby Ramsey would very much like to still be nursing and even now, he still tries on occasion.  Emma is having none of it.  It has been quite fascinating to watch because the poor kid just can't understand why his mommy won't feed him anymore and he keeps trying new and different approaches, hoping one will work.  He has run the gamut from sweet and wheedling to pitching temper tantrums to sneaky, stealth attacks.  Nothing works.  He even tried to kick Emma once.  That definitely didn't work!  When he just can't stand the frustration of not getting his way he runs around bucking, kicking and braying or...he digs holes.

I guess it could be worse, but this is not a habit I want to encourage or ignore.  This spoiled brat behavior is understandable given his history, but even little miracle babies have to have manners.  So, a couple of months ago, I introduced a new frustration into his life.  At breakfast time I tie them both and make them wait until I have everything ready.

And it's not like Ramsey hasn't had tying practice before.... 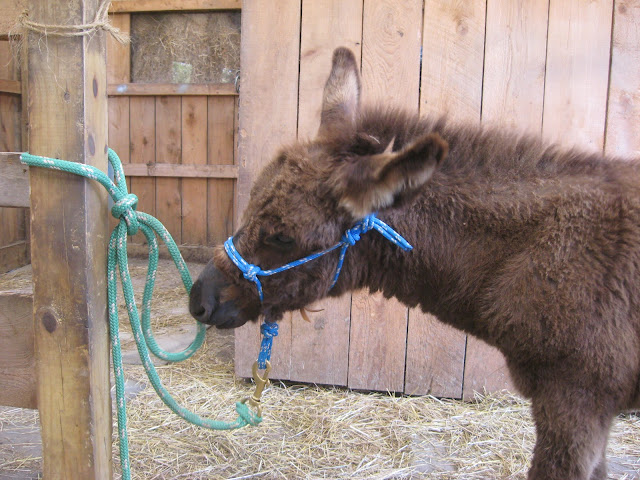 He's just never had to stand tied and WAIT for breakfast before.  The one thing this very acepting, willing baby can't abide is being left out and he feels very left out when he is tied up, away from the action. He has now just about run the gamut here as well.  Including whining, wheedling, pawing, kicking and whatever else his clever little mind can dream up.

I have to admit though, that his latest strategy of warbling at me, does get me every time.  And Emma...wise soul that she is, has stood quietly watching all along and now she has figured out that the warbling cracks me up every time and is starting to join in.