I think the last time I talked about Ramsey's foot, I mentioned the concerns I have about the way the foot is distorting laterally as you can see so clearly in this photo from 10/21/13... 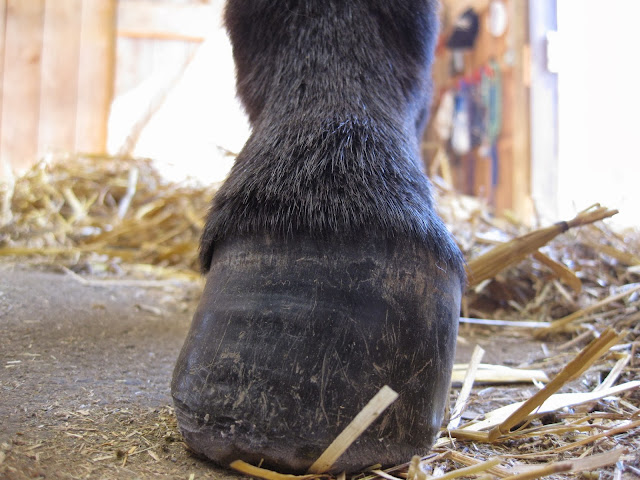 I have been doing very tiny trims each week trying, not to "fix" the foot, but hoping to guide it and stabilize it until we can get more growth.  One of the really big problems that my feed analysis revealed was a bad phosphorus deficiency coupled with high calcium and manganese, both of which further inhibit absorption of phosphorus.  This is the main cause of angular limb deformities, early arthritis and hoof deformities in growing babies.  I really am going to get around to talking about this more, I am just finding it difficult to figure out just how much anyone wants to hear.  People's eyes tend to glaze over when I start talking nutrition. What, if anything, would you folks like to know about equine nutrition? 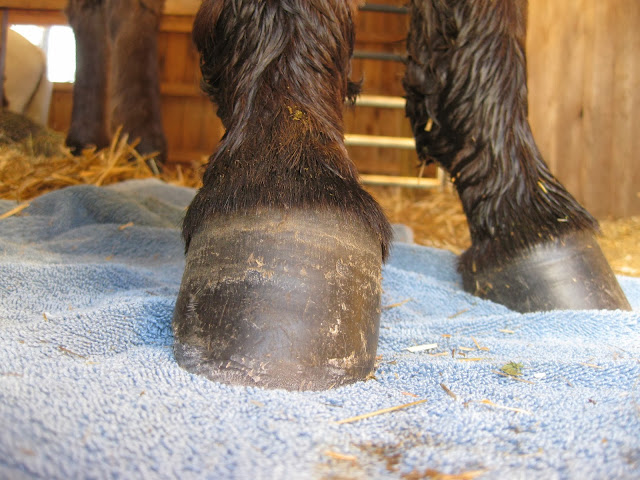 There is a spot on his sole, below where the coffin bone was removed, that is going to slough off.  It is hard to know, but the recent abscess he had may have originated there or it migrated to the weak point.  Fortunately, I caught it quickly and it seems to be growing out. 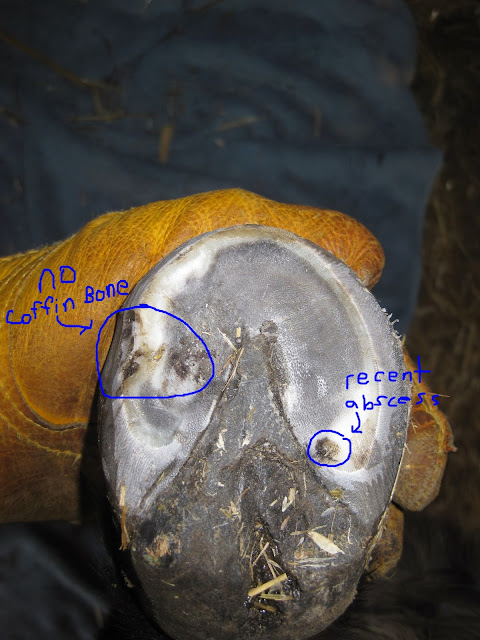 I think it is interesting to note the color variations on the entire lateral (on left above and right below) wall.  All the white, irregular areas along the upper left side of the foot, mirror the irregular bone beneath.  There is certainly a lot going on in this one tiny foot.

I am pleased with the new growth that you can see here that has occurred since correcting the nutrition issues.  The white line, which is that very thin white line that runs around the outer edge of the foot, is much cleaner and tighter looking.  The curve in the frog has straightened some as well, which, I hope, means that we have managed to stop the twisting distortion of the hoof capsule.  It is hard to see here, but the new growth where the coffin bone is missing is coming in better as well.  Hopefully we can continue that way. 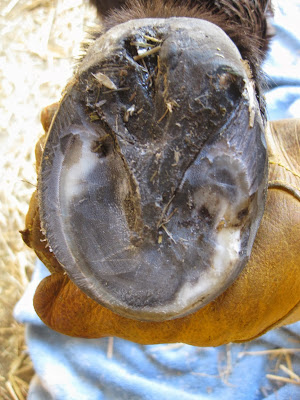 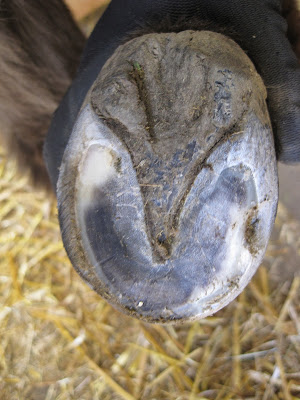 What I hope, is that I can help support the foot and the leg as they both continue to find where they need to be and gain strength now that the major mineral imbalances have been accounted for.  It is both a blessing and a curse that donkey feet seem to react to environmental pressures faster than horse feet do.  When things go wrong, they go very wrong very fast.  But, they also come right faster when given a chance.

As I am always posting pictures of bad feet I thought I'd add some of a GOOD foot.  Below is what a nice donkey foot should look like.  It does have a steeper angle than a horse foot and is a bit more upright, but it is still compact, tightly connected with a nice low heel.  The front of the foot is perfectly straight, with no deviations, indicating a well connected hoof wall.  If I ever had an x-ray taken of this foot, the front of the coffin bone would be parallel with the front of the hoof wall and there would be plenty of sole thickness. 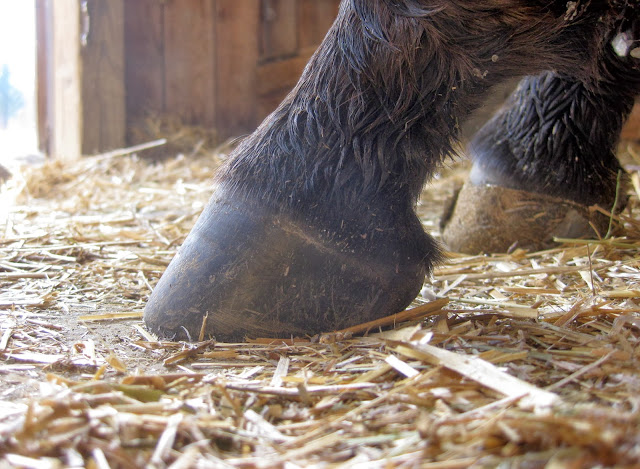 The entire back third of the foot is thick, well developed frog, extending well past the back of the heel buttresses, as it should.  This is one of the biggest differences between donkey feet and horse feet.  That massive frog combined with the greater elasticity of the hoof are what make donkeys so amazingly sure footed on rough, rocky terrain.  The small, narrowness of the foot is also why they do not do so well in mud, snow and ice. 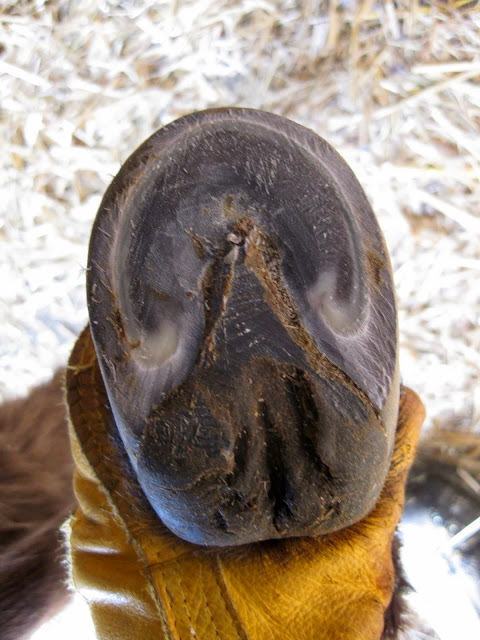 Living on soft ground like mine do, a donkey foot will never wear enough to keep up with growth and will not self trim.  The soles of donkeys on soft ground need to be trimmed back or the foot will just get taller and taller until it falls over.  This is why it is so much more common to see extreme hoof pathology on neglected donkeys then it is to see it in neglected horses.  X-rays of Ramsey's other foot showed that, even after trimming the sole back as much as I had thought was safe, he still had 15 mm of sole depth.

The foot is well balanced and I have no doubt that an x-ray would show the bottom of the coffin bone to be ground-parallel. 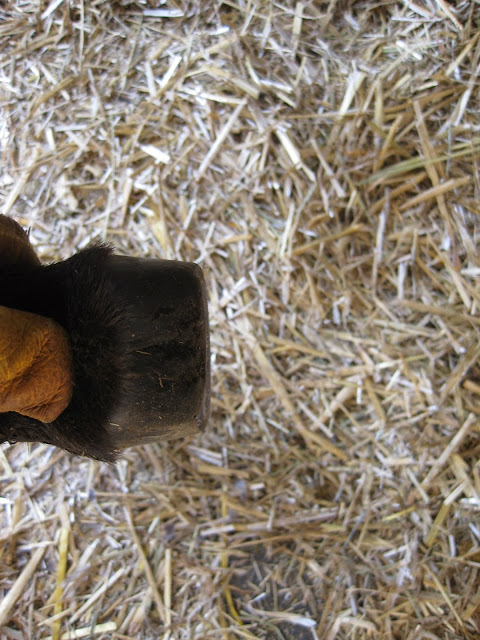 This foot toes out almost as much as his other foot, but remains balanced to his conformation and is a highly functional and sound foot.  If I were to try to "correct" his stance, I would cripple him.  Pretty-is-as-pretty-does and this is a very pretty foot. 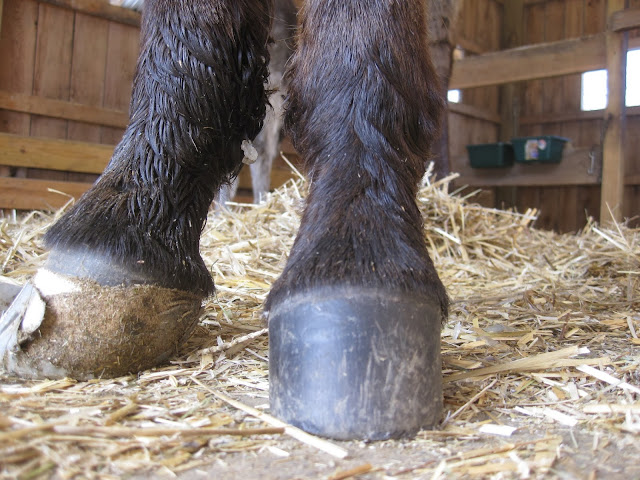