One of the jobs I've been meaning to do for weeks now was to make a trip over to a fish hatchery about an hour from here and get some fish for my pond (the one that got re-dug last summer).  I talked with all sorts of people trying to figure out what kind of fish I should have in my pond.  My goal is to have a healthy, self-sustaining pond that has nice water to swim in and interesting creatures to watch, all while not requiring any work on my part to keep it that way.  I absolutely don't want to have to feed the fish or worry about them, they are NOT getting names!  If any fishes get a hurt fin or whatever, he is not going to Cornell.  I'm just sayin'.

I got so many different answers from the "experts" to my question, "what kind of fish do I need to have a healthy pond?", I was feeling a bit overwhelmed.  Nearly everyone agreed on catfish to keep the water clean, but they also wanted me to have Bass and Perch so that I could fish them out again later and eat them.  The trouble is, I have absolutely no desire whatsoever to do that.  I hate fishing.  I also quite like all the little salamanders and frogs that have taken up residence, who are eating massive numbers of mosquitoes and which the Bass would eat. 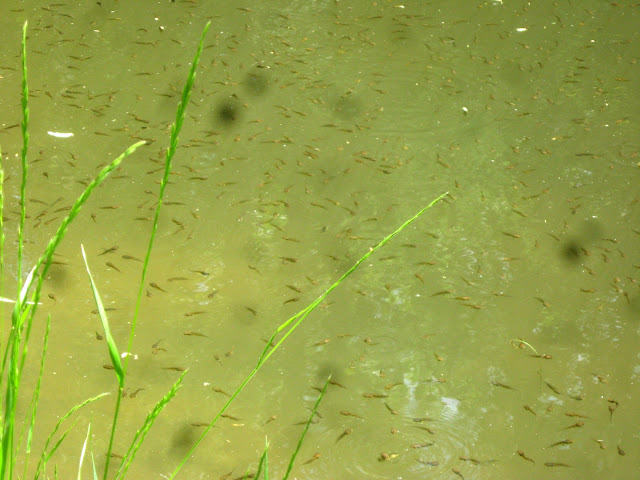 Worse, once all the little creatures that I like had been devoured, I would have to keep buying very expensive minnows so that the voracious Bass would have enough to eat, at least until they started reproducing enough that they would be able to survive by eating their own young.  Of course, then I would have to make sure to fish them out enough so that they didn't get overpopulated and starve without my intervention (by buying lots and lots more doomed minnows).  All of this was going to cost several hundred dollars and it still didn't address my question about whether or not this was a good thing for my pond.  Arrrghhhhh!!!

I know they tried and they meant well, but I don't think any of the friendly, intelligent, earnest folks at the conservation department or the DEC could grasp the idea that I wanted to have fish for sole purpose of having a nice pond and not for sport fishing.  I guess it is not a common enquiry so they really didn't know how to help me.  Enter the voice of reason... 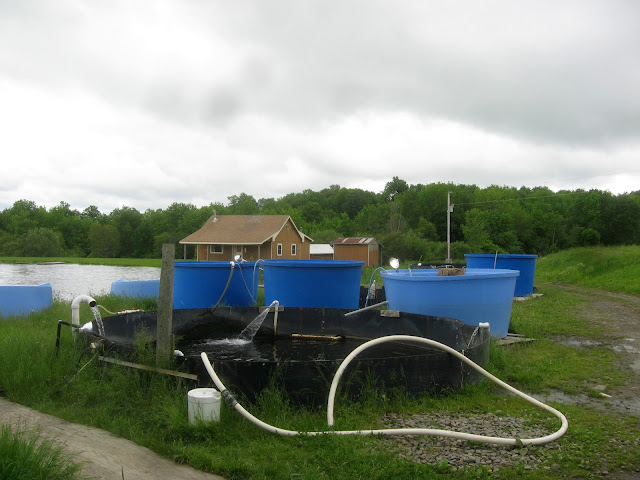 I finally managed to speak with the owner of Hickling's Fish Farm, who listened to what I had to say and the rest of our conversation went something like this:

"If you really don't want to do any fishing then you really don't want all that.  All you want are some nice, well behaved Channel Catfish.  They live 12-15 years, won't stir up the bottom and probably won't reproduce in your pond so you might have to buy some when they eventually die off."

"Do I have to feed them, do anything for them, worry about them?

"Nope, nope and nope.  They'll eat all the algae, a few other things, make sure you never have any leeches and keep the water clean."

"Nope, but they make darned good eating if you do!"

So, Farm Buddy and I made the trek over to the hatchery on Saturday and bought some catfish. 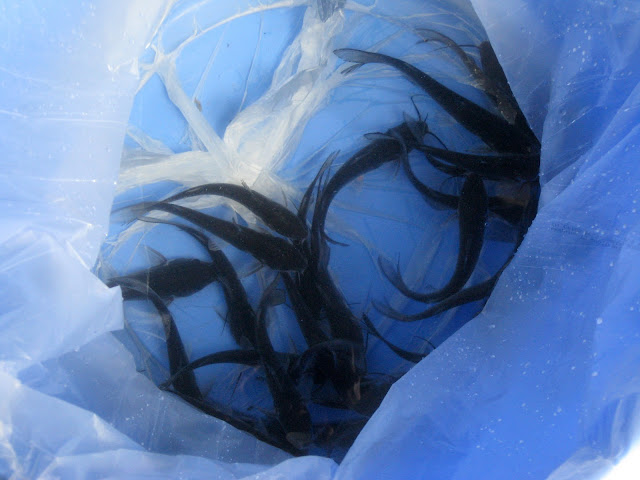 The hatchery was really very fascinating, I would have liked to have seen more of it, but there wasn't time enough.  For transport, the fish went into a plastic bag with about 6 inches of water then the bag was filled with pure oxygen and closed up tight for the ride home. 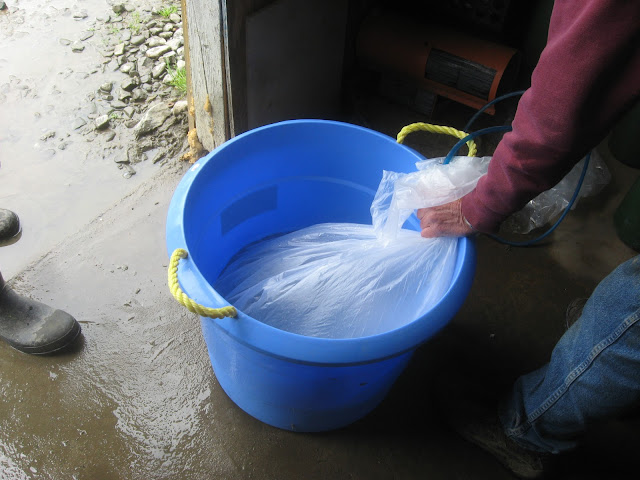 They're really quite beautiful aren't they? 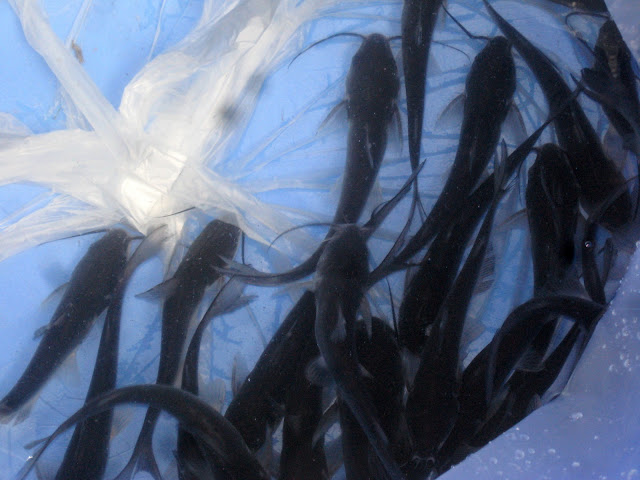 We only saw a tiny portion of the hatchery, but we did see several tanks filled with rainbow trout... 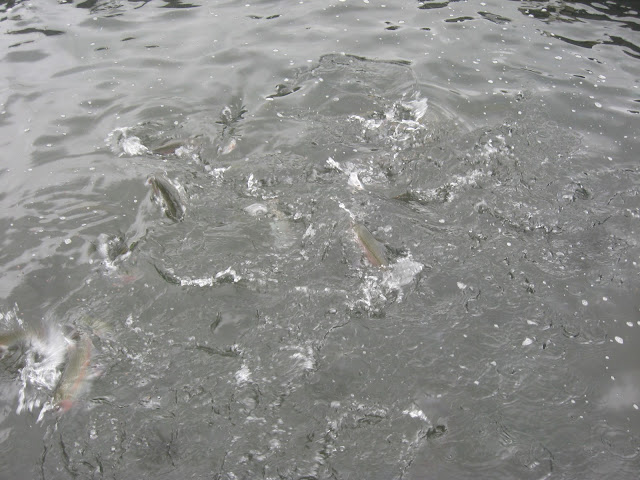 as well as Golden Trout, which I had never heard of before.  I wish the pictures had come out better, there are several hundred trout in there, the golden one is completely surrounded. 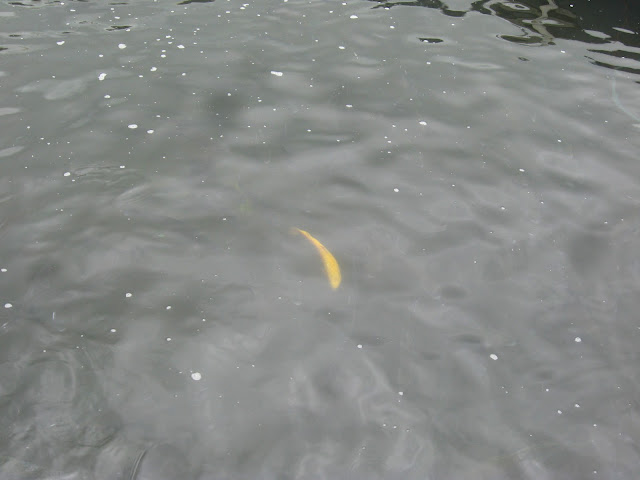 He tossed some fish food in the tank, those trout don't mess around...

I finally got my catfish home... 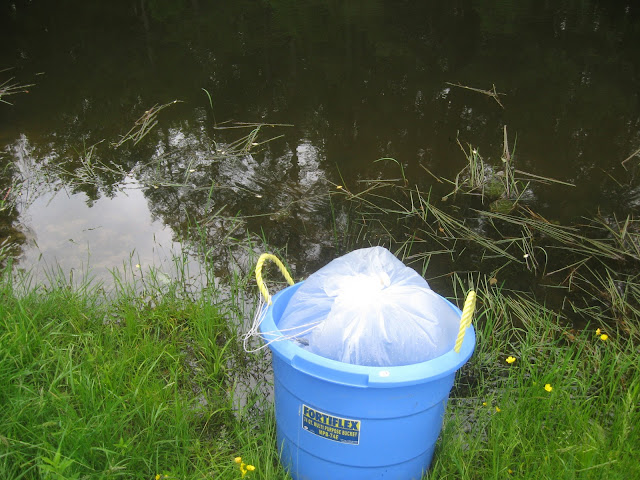 and introduced them to their new home.  They were a bit hesitant to venture forth, but eventually they all did, disappearing instantly into the depths. 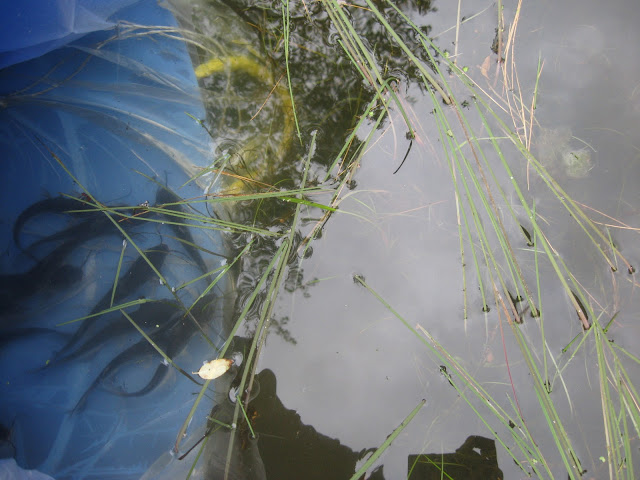 have fun and watch out for the snapping turtle!" 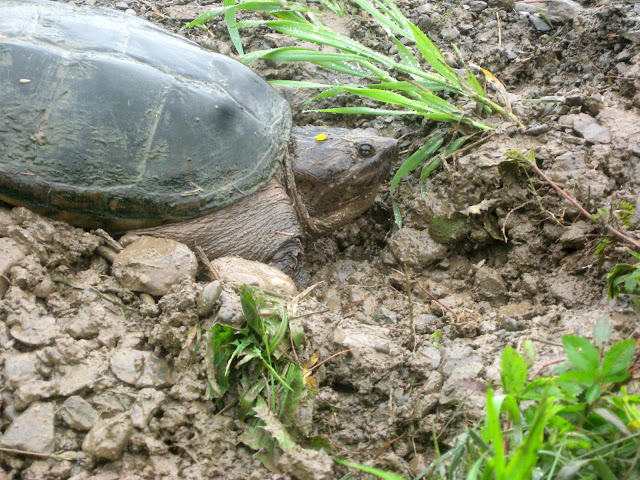 Posted by The Dancing Donkey at 1:18 AM