I have had several questions recently that I keep meaning to answer and then don't get to so I thought I'd just try to post them all here.


Rebecca2 wanted to know more about hay and  baleage....Baleage is hay that is round-baled shortly after it is cut while it is still very green and has a high moisture content (as opposed to dry hay which does indeed have to be dry or it will spoil).  The bale is then very tightly wrapped in very heavy, opaque white shrink wrap.  The wrapping has to be completely air tight or the bale will spoil.  The hay undergoes a fermentation process inside the wrap which preserves the hay as well as releasing more of the sugars inside the grass.  This is a very high quality feed suitable for dairy cattle and growing animals.  Horses can eat baleage and I have fed it to my own in the past, however, it is generally too high in sugar and protein and too low in roughage to be a good choice for anything other then heavily pregnant or lactating mares.  I would not feed this to donkeys other then to perhaps supplement a pure straw diet.  Even then, the sugar content is still way too high for donkeys.  The giant white 'marshmallows' in the background are balage. 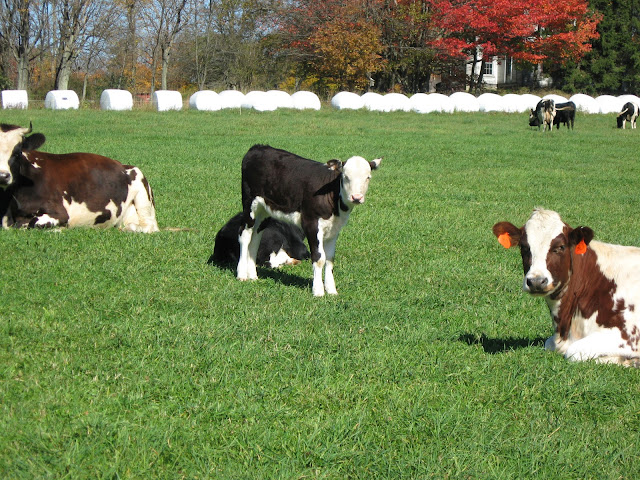 The truly great thing about making balage is that it is not so weather dependant.  There have been a couple of nasty times when our baleage was cut, baled and wrapped in pouring rain.  This is definitely not ideal, but desperate times call for desperate measures and when it comes to balage, it's better too wet then too dry.  They keep fine if the moisture content is high enough for proper fermentation, but if they are too dry, they will mold and be unusable.  The only problem we have had with too much moisture is that they freeze solid in extremely cold weather, which is just one of the reasons for making several types of hay. 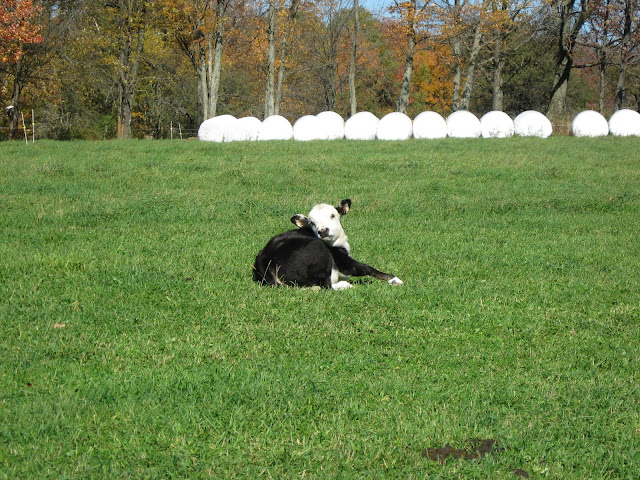 Several people wanted to know what kind of hay we make and how much land there is....The hay is all native mixed grass.  Primarily orchard, timothy and brome grass (this farm is separate from my place where I own 20 acres, it's about about 3 miles away).  There are sixty acres total; a 20 acre hay field, roughly 25 acres of pasture and about 10 acres that are in a wildlife reserve area.  We cut hay on this, but not until after July 1st so that the ground nesting birds can raise their babies.  I counted nearly 20 pairs of bobolinks up there last year and there are more every year.  This hay is coarser, generally lower in sugar content and higher in roughage because it is past its peak maturity.  This is what I feed my horses and donkeys.

None of these fields have been reseeded or chemically fertilized, but Farm Buddy does intensive rotational grazing and uses organic practices.  The cattle are grazed on all of the land after all of the hay is cut.  Forage samples from this farm have won first place every year they have been entered in the county fair.

MtWaggin wanted to know if I have more skeeters since I had my pond re-dug.  Actually, I have a lot less this year.  There has always been a pond there, but it was shallow and a bit stagnant.   Now that it is deeper and there are roughly 12 billion hungry tadpoles and salamanders in there, I have noticed a dramatic drop in the number of skeeters.

Irmgard wanted to know if the sheep always line up so neatly.....sometimes....fairly often.  They don't always manage to get themselves lined up quite so well, but they do frequently move and graze as a solid unit, very much like a school of fish.

There were also a couple of questions about the barley straw in the pond...When barley straw degrades in water it releases oxygen which helps prevent the growth of anaerobic bacteria and algae, thus helping to keep the water clean.  That's the way I understand it anyway.

It seems like I am forgetting some questions and I am too tired to go check.  If I missed any, please let me know.  Now I am off to bed.
Posted by The Dancing Donkey at 2:18 AM