For any of you who are interested in my adventures with hoof trimming....you may remember that I have mentioned (click here and here)working on riding Buddy's horses, Hawkeye, Lakota and Izolde.  Poor Hawkey has been having severe hoof problems for several years now, longer than I have known him in fact.  There is no one thing that I can point at and say "this is where things went wrong".  His troubles are the culmination of a lifetime of poor farrier work, most of it prior to Riding Buddy owning this horse.  When his feet really fell apart, they did so pretty spectacularly.

When my horses, who had always had good feet prior to my move to my current location, also started having similar trouble, I began studying, researching and studying some more.  I eventually took over doing all of my own farrier work.  It wasn't something I ever thought I would do (so little ever is!), it was self defense.  More out of desperation then anything else, I started working on Hawkeye as well.  After all, I couldn't possibly do a worse job then the professionals already had.  RB and I were having serious discussions about the possibility of euthanasia being in Hawkeye's near future and that folks, would have been a crying shame.  He is some nice horse and incredibly fun to ride.

I have been working on Hawkeye for about 9 months now and those months have been plagued by self-doubt and uncertainty.  We have seen a lot of improvement in the past few months, but I was starting to wonder if I had really made that much difference.  And here is where I am very glad of the few photos I have taken of his feet.  I was rather lackadaisical and careless about it, but I know I will do better in future.  Because, when I finally went back through those photos this weekend, I can see that we have made more progress than I thought.

This photo was taken a few months after I started working on Hawkeye.  Believe it not, this foot is actually better then what is was the year before. 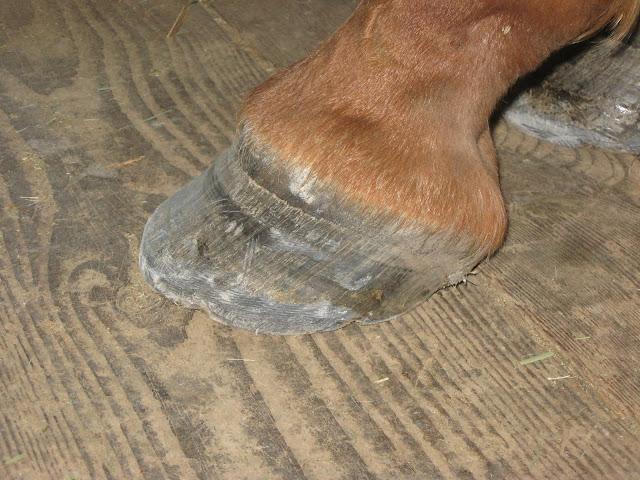 This photo of the bottom of his foot shows a bit better what some of the problems were.  Take note of the crevices on the left and right side of the hoof.  Those crevices were more than an inch deep.  Hawkeye had already had a radical hoof-wall resection done, it had grown out and the white-line disease was worse than ever.  It is hard to see because of the camera angle, but the bottom of his foot is actually convex.  There should be about a half inch of concavity in the middle of his foot.  Poor Hawkeye was walking purely on the sole of his foot and the hoof walls, which should be supporting him, did not touch the ground.  He had badly contracted heels and a deep seated infection in the sulcus of the heel (that's the deep crevice in the back of his foot). 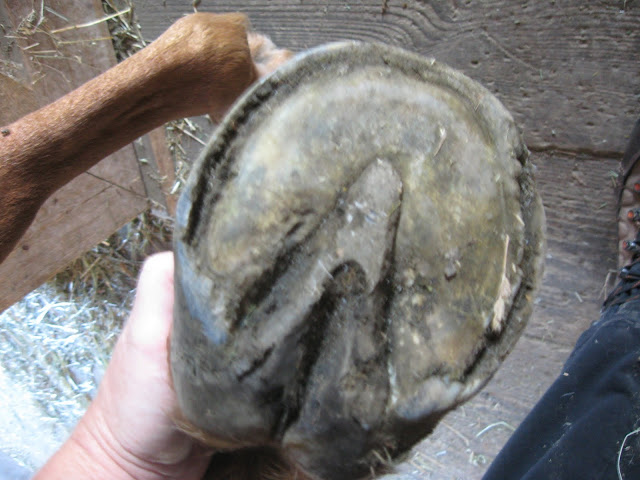 Here is some of what the problem is: (please bear with my feeble attempts at computer drawing)

The blue lines show the way the hoof tubules were growing, notice how they all curve forward and the line at the back of the foot is almost as long as the one at the toe and it is crushed forward.  The white lines are a vague approximation of what the foot should look like. 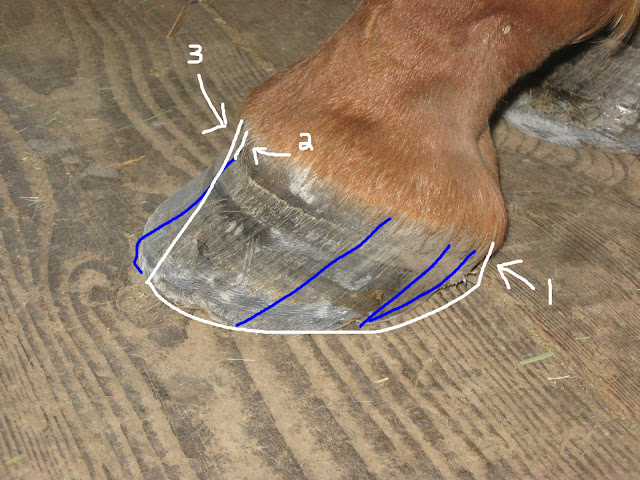 The white line labeled "2" shows the angle that the foot is trying to grow.  The line at "1" shows how long, wide and straight the heel should be.  The white line at "3" shows approximately where the toe would be if the foot were growing properly.

This next photo is what the foot looks like as of April 13th.... 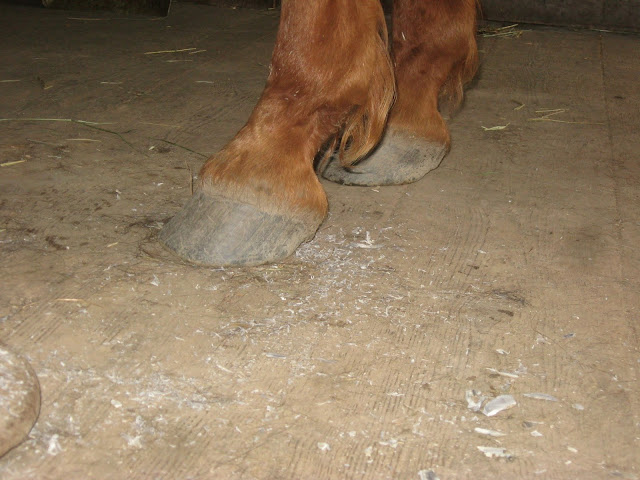 Here is the same photo with more of my white and blue lines.  The blue lines are where the hoof is right now and the white is where it will hopefully be in a couple more months.  Notice especially how much shorter and more upright the blue lines at the heel are and how much less of a gap there is between the blue and white line at the toe.  We have come a long, long way. 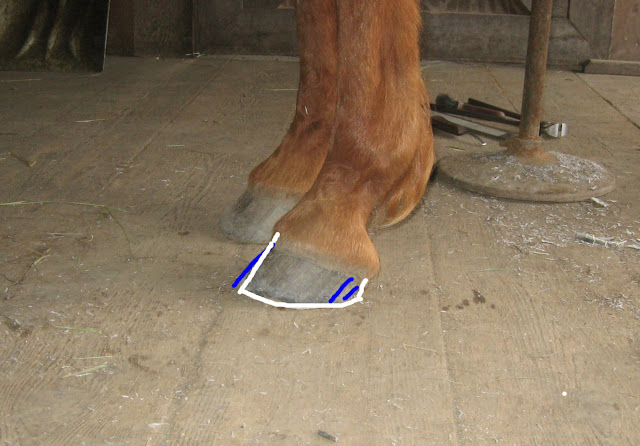 From the bottom...all of the crevices are gone.  Gone completely! No amount of treating these feet with resection or soaking in White Lightening, CleanTrax, sugar-dine, you-name-it, helped.  Once we started trimming for healthy growth, the white-line disease went away on its own.  Also, his heels, which were so severely contracted have spread nearly an inch farther apart..... 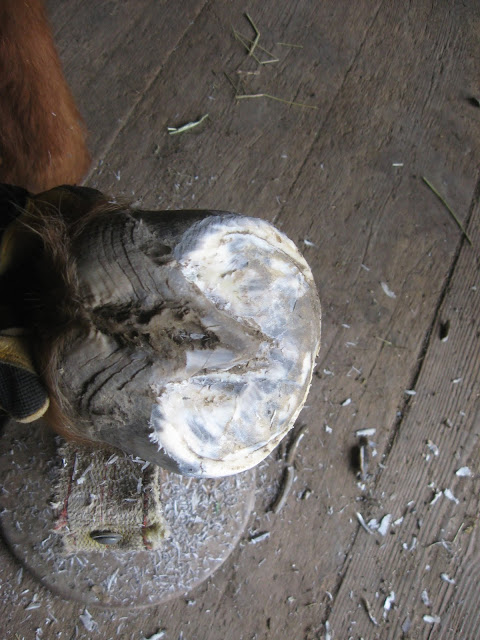 and, he now has a 1/4 inch of concavity with solid hoof wall holding him up. 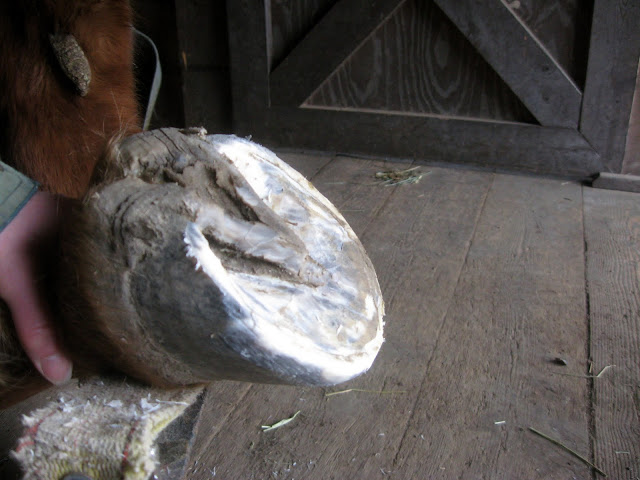 The thing that gets to me the most though, can't be photographed.  When I first met Hawkeye, I thought he was a rather aloof, stand-offish sort.  He did not engage and always seemed rather withdrawn and uninterested.  He was hard to catch and for several months after I started working on his feet, he would actively avoid me.  Now, he is a different horse.  He is friendly, charming and enjoys interaction.  It made me realize that he has never been aloof or stand-offish, he has been in pain and now he isn't.

I will be taking more photographs of feet from now on because I really needed to see these and I needed to write it all out.  It helps give me the courage to keep at this.

If you folks out there are not bored to death yet and are interested in more hoof studies, I will share what I am doing with Lakota.  He is, believe it or not, an even tougher case than Hawkeye.  Let me know.:)
Posted by The Dancing Donkey at 9:24 PM