I mentioned that I bought more firewood over the weekend, the pile seemed to be disappearing at an alarming rate so I decided to take advantage of the frozen solid ground and get some more.  The only way to get a truck near my woodshed is for the truck to drive across the pasture, which can only happen when the ground is dry or frozen.  In order for the truck to get into the pasture, it has to get through the fence.  I usually just push the wire down to the ground and drive over it.  Simple, easy.

The firewood guy brought two loads and the second load arrived early Sunday morning while I was still asleep.  No problem, the guy just pushed the fence down, did his thing and left.  Later, when I went out, I checked to make sure the fence was up, it looked OK.  However, I failed to notice that a little farther down the fence-line, the wire had been cut.  I have no idea why.  Perhaps firewood guy was afraid he would get zapped.

I did not notice that the fence was down, but several hours later, when I had gone into the house for a breif break, the donkeys did.  Normally, it would be no problem, they were just out in the pasture after all.  Out in the pasture with Gabe though, that was the problem.  I glanced out the window to see Gabe chasing Ramsey, Emma franctically and futilely trying to intervene and Tessa just plain confussed.

I ran out to rescue Ramsey and, eventually, I did just that.  He is unhurt and is OK.  However, I didn't make it there before Gabe had knocked Ramsey right off his feet and was pawing at him.  It was Tessa who saved the day by getting between them long enough for Ramsey to get up.  When Gabe tried to chase him again, Ramsey ran through the fence to escape.  (Here is one of the benefits of poly fencing, the fence got knocked down, but Ramsey was unscathed by running through it.)

I rescued Ramsey and Emma, captured Gabe, fixed the fence, the chaos stopped and everyone is OK.  But what the hell do I do about this?  This is the second time something like this has happened and I think it is a miracle that Ramsey is unhurt.  I am very careful to keep Gabe separated from the donkeys, but obviously, not careful enough.  The reality is that, no matter how careful I am, stuff happens.  Fences break, gates get left open, animals panic.  Stuff happens.

I have to say that Gabe did not do any of this out of meanness or with the intent to harm.  He sees donkey chasing as a fun and wonderful game.  He grew up with several other rough and rowdy geldings who used to play hard and often.  He signals Ramsey out because he is the only other boy to play with.  Yes, some of it is a dominance issue, Gabe could be a bully if allowed.  Mostly it is fun, fun, fun.

Most horses and donkeys do play well together, Emma and Tessa are a perfect example of this.  Gabe just can't understand that body-slamming someone who weighs 1000 pounds less than he does is not acceptable.  I have no idea how to change this behavior, especially as it is normal horse behavior for a young gelding.

Gabe is a good horse.  He is a solid and reliable trail horse who will go anywhere and through anything.  He is 100% traffic safe, even around motorcycles and atvs.  He is steady in parades, he'll happily jump on any trailer you point him at.  He is athletic, sound and has a charming and sweet personality.  He loves everybody.  He is that rare horse that everyone seems to be looking for and can't find.....and if he hurts one of my donkeys, I will never forgive him or myself. 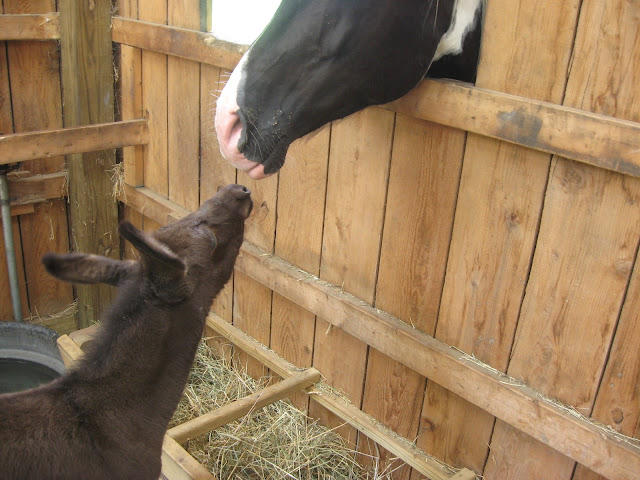 Posted by The Dancing Donkey at 9:07 PM