For once things went almost as planned.  We made it to Cornell at 7:58 this morning with dry roads and no trouble.  Can't beat that!  As soon as we arrived, word went out that Ramsey was back and all of his fans started appearing like magic.  It really is amazing what this one little donkey seems to do to people and I can really see how donkeys can make wonderful therapy animals.  Even worried and distraught horse owners in the midst of their own crises, couldn't help but break out in smiles when they saw Ramsey headed their way, especially wearing his high-top.   One student did an actual, honest-to-God happy dance when she heard Ramsey was there.  He is simply irresistible.

The good news for Ramsey is that the vet and farrier both thought that Ramsey's foot looks great!  They even decided that they did not need new x-rays since it is healing so well and he is walking so soundly on it.  The farrier trimmed the foot and took off all the dead hoof that I was afraid to cut.  Between what I did last week and what he did today, his foot is at least an inch shorter.  He still has a huge hole in his foot, in fact, it may actually be larger now, but the wound is clean, dry and healing beautifully.

The hole in the side wall has grown out so much that, from the side it looks to be half gone.  However, that large section of sole and frog that was dead, has now been cut out so the hole in the bottom of his foot is rather frightfully large.

After the trimming I did last week, I thought this would happen so I wasn't really surprised.  The hoof that is left is healthy and growing fast, so we all think it will be OK as long as I can continue to keep it completely clean and dry.  The only drawback is that there was no way they could use an acrylic patch on the foot.  The stuff gets very hard and, while it works well on the sidewall of the hoof, it can't be used on the sole.  It would be like making him walk on a large rock all the time.  It means I have another 5-6 weeks of having to keep the foot bandaged.

Again, I am not surprised by this and I'm not really unhappy about it either.  The patch would have made my life much, much easier, but it also prevents any further treatment or observation of the hoof.  If something were to go wrong under that patch, I would never know until he came up lame again.  It means six more weeks of rather all-consuming care, but, we have made it this far, we'll make it another six weeks.  I do get to stretch the bandage changes out from every other day to every 3-4 four days, so there is at least a tiny reprieve.  I hope to have some pictures for you in a few days.

The other very good news is that Ramsey's gelding surgery went very well.  Donkeys are much harder and riskier to castrate then most other animals and I have been worried about this.  I am glad I had the surgery done at Cornell in a very controlled environment rather then on the farm.  I am also just extremely relieved to have it done.  I have heard of donkeys actually breeding as early as seven months and Ramsey is just about 6 1/2 months old.  If we had had to put this of for too much longer, I would probably have had to find somewhere else for Emma to stay.  None of us would have been happy about that!

All in all, it was a very god day and I can't tell you how happy and relieved I am to have this one done and behind us.  We still have a long way to go, but I feel good about where we are.  I had felt like we were making progress, but it is so good to have it  confirmed by the people who really know.  Both the vet and the farrier told me to just keep doing whatever I have been because the results are outstanding.  Very good to hear. 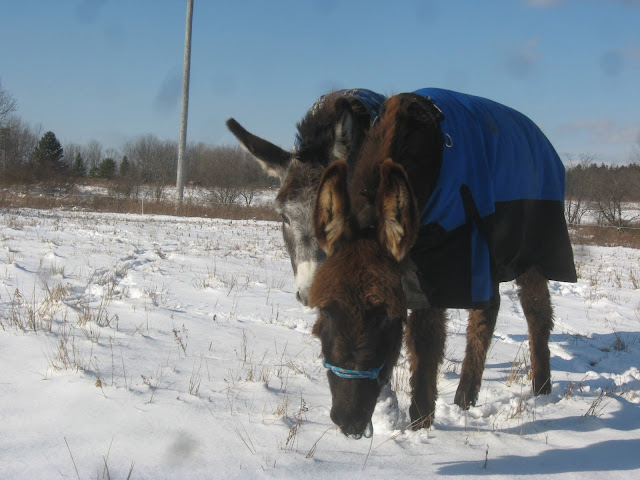 Posted by The Dancing Donkey at 10:17 PM