Yesterday, I mustered some troops and we refilled my hay shed.  We moved 114 bales.  We probably could have crammed in another 30 bales, but it wasn't wort another trip.  I'll probably need one more truck load to make it to Spring.  I am thinking about ways to change things around so I can store more hay.  I HATE having to haul hay in the winter.  It is so difficult keeping a path cleared to the barn, the truck always gets stuck, the weather doesn't cooperate....Yup, gotta store more hay or have fewer mouths to feed.

The donkeys at least thought it was nice of us to provide some entertainment and they very kindly offered to help out with cleanup. 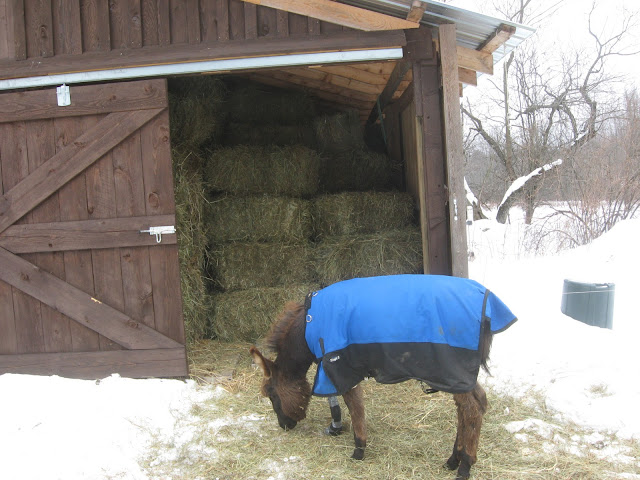 After taking Tanner for his walk and finishing all the normal chores, I went down to Riding Buddy's place to trim feet.  Remember Hawkeye and his sky-blue feet? 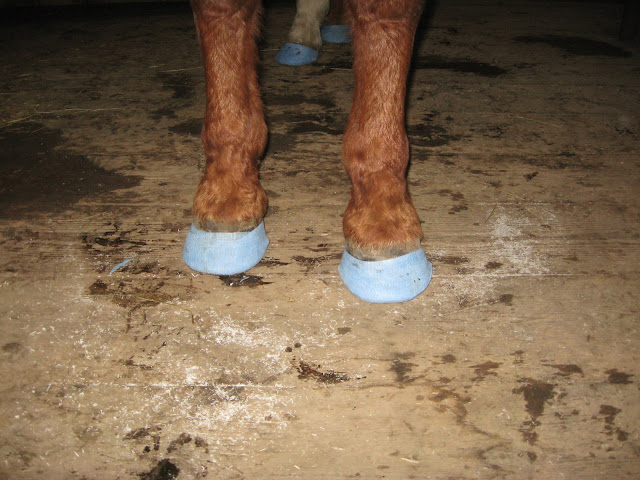 We saw immediate, good results with the Equisock casts, unfortunately, they only lasted 2 weeks instead of four.  They didn't fall off, he wore through them.  However, even in just two weeks there was a lot of improvement.  We have another version made by a different company and I would like to know how they would compare, but as the snow is quite deep, we have decided to hold off reapplying them for a bit and see if the improvements will continue with the help of the snow.

Meanwhile, I started work on this pair of feet... 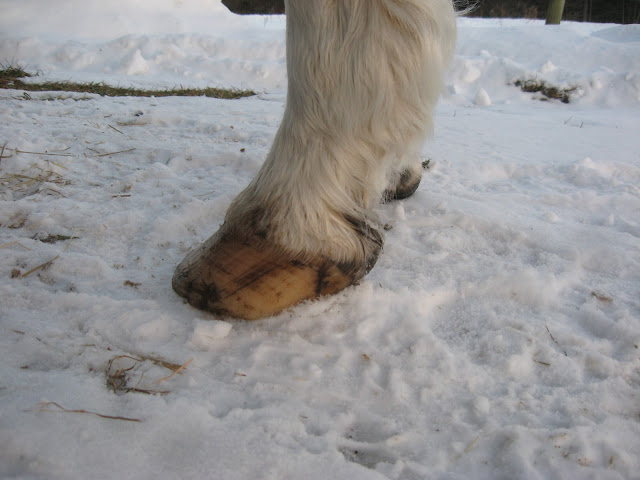 These belong to a 14 year old paint horse named Lakota who is related to Gabe.  Lakota's mother was Gabe's grandmother - I think.  I have no idea what such a relationship is called, my knowledge of genealogical terms doesn't stretch that far.  Regardless, these feet are going to be another real challenge.  They suffer from severely under-run heels, thin soles and hoof wall separation.  While all of these things seem like separate problems they aren't really.   The under-run heels push the foot forward causing the sole to thin and the walls to stretch.  The more the walls stretch, the more the heels grow under.  The problems all end up feeding into one another and the whole thing turns into a vicious feedback loop.

I have no idea if I will be able to help him or not, but I'm gonna try.  A barefoot trimmer worked on him last year and I think she was on the right track and may have ultimately helped.  However, she did too much too fast and made him so lame he could barely walk.  He wound up wearing shoes all summer just to keep him comfortable.   The shoes made him comfortable, but did nothing to help the underlying problem.  There are farriers in the world who can help solve this problem with shoeing, but that is a hard beast to find in this area.

I trimmed Lakota's feet for the first time yesterday and, rather then try to address all the problems at once, I worked just on the heels and did just enough to the toes to stabilize them.  The goal is to get the heels going in the right direction, if that happens, the toe will follow naturally in future trims.  If the toe follows, the stretching will disappear from the wall and the sole will gain some concavity and thicken.  I used this method on Hawkeye and we have seen dramatic improvement in the past few months without any lameness.  I hope it works here.

Returning home, cold, tired and hungry, I decided to indulge myself.  After a scrumptious dinner of tuna fish (OK, maybe scrumptious isn't quite the right word, but it was quick and easy, which is often the same thing in my book:) I took a long, hot bath; made a pot of tea and read an old book having absolutely nothing to do with horses, donkeys, hooves or hay.  Do I know how to live it up on a Friday night or what?
Posted by The Dancing Donkey at 2:06 AM