Ramsey's foot abscess has invaded his whole body and he is very sick.  His temperature is all over the place and he is very miserable now.   I spoke with the vet yesterday morning and she agreed that if he wasn't better by the end of the day, she would come out.

Right up until I left for work yesterday afternoon, he was still bright-eyed, cheerful and eating well.  I was concerned though, because his temp was still high and I wound up coming home early as I was worried about him.  By the time I got home, his temp had dropped to 97.8 (which is almost too low) and he was depressed and not eating or nursing.

The weather is not helping as it is truly miserable with temps in the low forties and constant rain.  Snow or sleet is expected overnight.  Thank goodness I bought Ramsey a blanket, he really needs it right now. 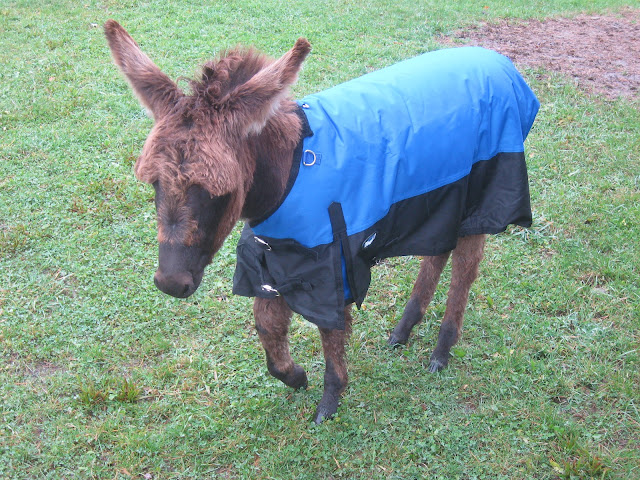 Since he quit eating and drinking, I am very worried about dehydration and weakness.  The vet finally made it out this afternoon and we gave him IV fluids, which I will continue for the next three days.  He has a an IV catheter under the green vetwrap. 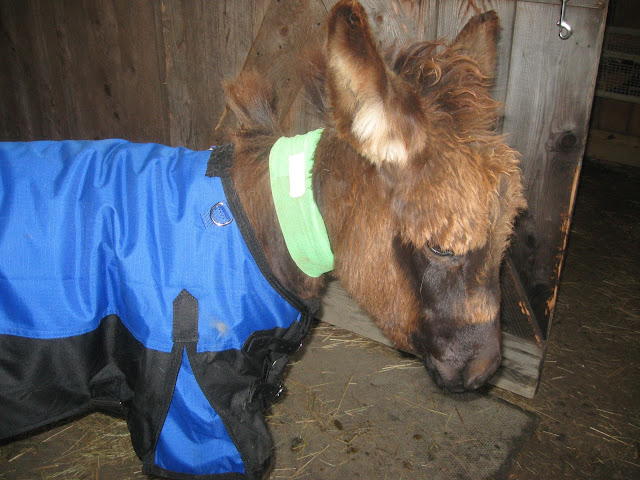 He seems to be having some trouble laying down on his own and this afternoon, when the vet was here, he lost his balance when she was looking at his foot.  He clearly wanted to lay down so I just eased him down rather then prop him up.  I sat with him and held his head in my lap and he wound up sleeping through the entire catheterization process.  It made him a perfect patient, but it scared me to death.

He is on antibiotics, a higher dose of Banamine and IV fluids.  The abscess did rupture out of the top of his foot this afternoon in three places.

This is the worst abscess I have ever seen.  I have only ever seen one abscess that went systemic before and it was never this bad, it responded to antibiotics almost immediately.  On the other hand, that was in a very robust, four year old draft cross who weighed 1300 pounds.  Ramsey is too young for this nonsense, I'll be sure to give him a stern lecture about it just as soon as he gets better.

I sure hope this is not typical of donkeys.  If Ramsey does not show some real improvement by tomorrow afternoon, I may have to try to get him to Cornell.
Posted by The Dancing Donkey at 10:56 PM