A Time For All Things

I try not to swear too much.  I could climb up on my soapbox and jabber on about the sanctity of language, polite behavior and a sincere wish to not offend.  All of that may be true to a point, but for me at least, there is one other very good reason to keep a civil tongue most of the time....If you swear too much then those swear words lose all their power and are of no use when you really need them.  Take for example, an incident that occurred a couple of weeks ago....

Picture a tall woman, bent nearly in half, craned sideways and practically standing on her head trying to get a clear view, past the furry belly of her very short, very pregnant, donkey's udder.  Picture also a neurotic, arguably brain-damaged cat slinking up behind the woman and donkey unbeknownst to either of them.  Remember that said neurotic cat made an attempt to use the donkey's leg as a scratching post just a few days previously.  Picture if you will, what might happen when said cat sneaks up on said donkey and grabs her leg....the donkey's hock jerks backwards and connects very solidly, with the bridge of the woman's nose.

Here then is a moment when one NEEDS swear words.  Lots of swear words.  There needs to be some channel in which to funnel the shear primordial rage that boils up instantly from the dark recesses of the hind-brain when one is violently hit in the nose.  After all, one certainly does not want to beat one's beloved donkey who certainly did not mean to break one's nose.  Nor does one want to scream in rage at the mildly befuddled horse standing nearby.  An action which would also have the very undesired effect of inciting the Border Collie to come to one's aid like an avenging angel and instead making all hell break loose.  And, of course, in a rare moment of common sense, the cat, who could definitely be considered the proper target of such rage, has disappeared.  Far better at this moment, to pull out all stops on the language barrier while stomping one's way to the house in search of paper towels, ice packs and anti-inflammatorys.

So, the next time the FCC announces some outlandish fine for some misplaced cuss word and you are tempted to roll your eyes and say "who cares", remember this and know that we need our swear words and we wouldn't want them to be diminished by over-use. 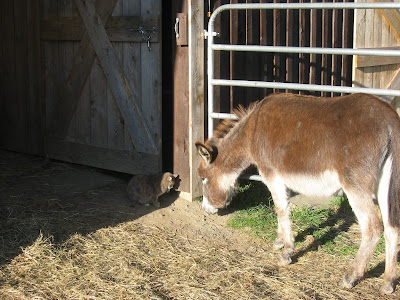 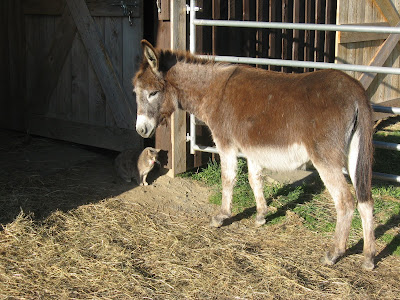 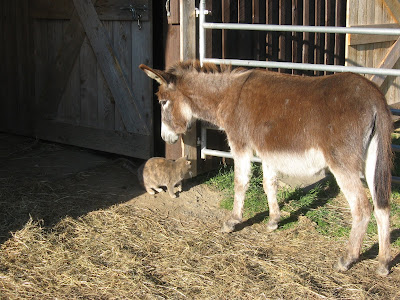 Note:  My nose is much better now.  It was somewhat fractured, but not badly broken.  My quick application of ice and anti-inflammatorys kept the swelling under control.  I straightened it out right away (swearing all the while) and it has healed up quite well.  I doubt anyone will ever notice once the pretty colors are completely gone.
Posted by The Dancing Donkey at 11:09 PM