Emma's isn't the only baby we have been waiting on around here.  It's Spring on the farm and all the cows and sheep are due as well.  Over on my friend's farm, she has been expecting another beef calf all week.  Some other friends, on a different farm, have been waiting for their Jersey cow to calve.  All week, every time the phone rings, the conversation is the same:

"Not yet, what about you"

We then spend several minutes discussing the vagaries of on-farm gynecology and make predictions based on how each animal in question can maximize the unsuitability or inconvenience of their chosen time.  It's been a bit of a race to see who was gonna go first, the cows or the donkey.

Today, the weather was really miserable.  It was in the 30's, spitting snow and ice with high winds.  The phone rings:

"We have calves, where's your donkey baby?"

"What, BOTH calves were born?"

"Yep, Violet just had a HUGE bull calf and Pilgrim had a heifer calf."

The sheep are due to start lambing in a week.  I hope we can beat them at least.


Pilgrim with her new baby... 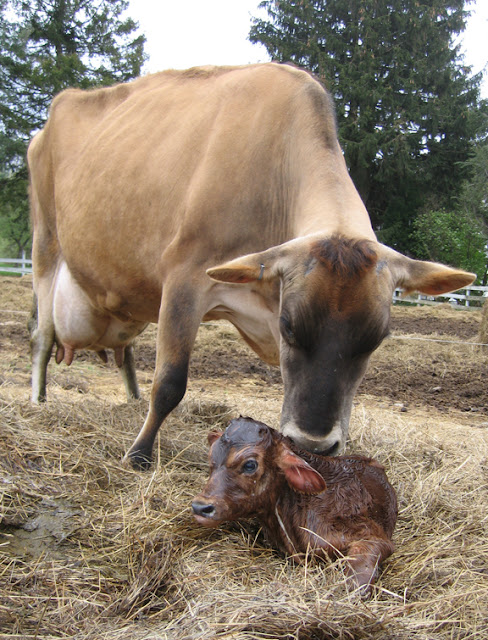 Posted by The Dancing Donkey at 11:08 PM