The vet was out this morning to give Spring shots and checkups to Emma and Tessa.  They both took their little stabbings graciously.  Nothing has really changed for Tessa, he thinks I should try and get on her again.  I probably will sometime soon, but I am not getting my hopes up this time.  Because it is impossible to x-ray a horse's hips, we can't know for sure what her problem is, but there is still a lot of heat and some swelling in the large muscle between the point of her hip and her croup.   It's been 10 months since she was hurt and I think she is most likely as good as she is going to get.  As long as no one tries to ride her, she is not in any pain and she is very happy and content.  Her biggest risk at this point is that she is getting quite chubby in spite of a diet consisting of nothing but late cut grass hay.  When Gabe comes home, I am hoping to be able to pony her off of him to give her more exercise.  She needs it.

I asked the vet for his best guess on a foaling date for Emma.  Unfortunately, his answer was exactly the same as mine...it could be tonight, it could be a month from now.  He picked April 25th, but only because it is his birthday.  Birthdays seem to be the top choice in my baby pool.  The ligaments around her tail head are very soft, but they have been for a few weeks now.  Her udder continues to develop, but just a little at a time.  She has wax on the end of her teats, but she has had them for three months now. Young animals often show very early signs of birthing, making them even harder to predict.  I am trying to be patient.  The longer Emma goes, the older she will be which is better for her.  I am trying to be patient.  Forgive me if I start repeating myself.  I am trying to be patient. 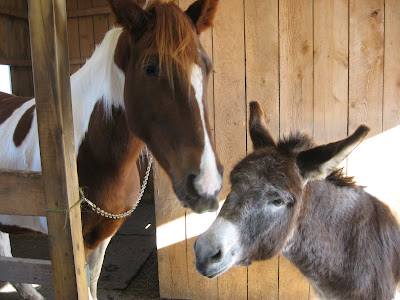 Posted by The Dancing Donkey at 11:10 PM