One last set of twin lambs born tonight and lambing is done for the year.  It was a record year as all the ewes lambed this year.  The youngest ewe had a single lamb, but all the older ewes had twins, triplets and the one set of quads.  Sixteen lambs from seven ewes and all healthy - you can't ask for more than that. 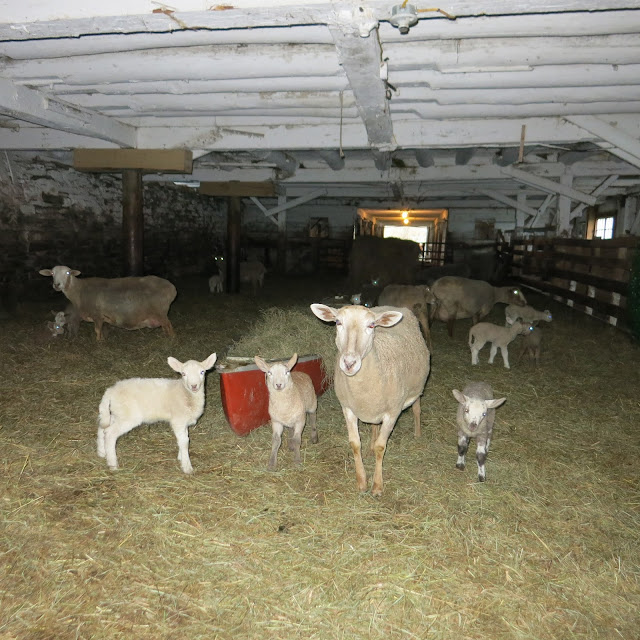 The calf is doing great.  He is a big, vigorous calf who drinks down every drop of milk that comes his way. 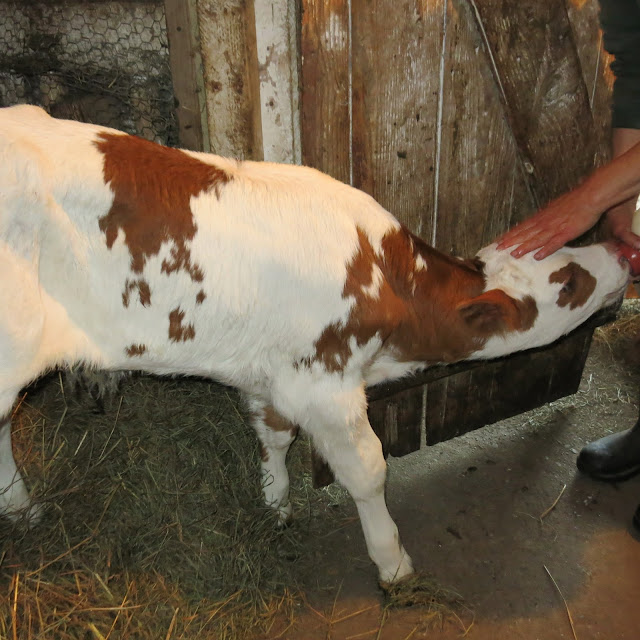 Nearly all dairy calves are taken away from their mothers at birth. As long as they get enough colostrum and regular feedings, they generally do very well.  Calves are much easier to raise than an orphaned equine would be.

Dairy farms are in the business to make milk and the calves are a necessary by-product.  The heifer calves grow up to replace their mothers and the bull calves usually end up dead or as veal.  Veal calves live short, miserable lives and we want no part of that industry.  Actually, we want no part of any modern agri-business practices. 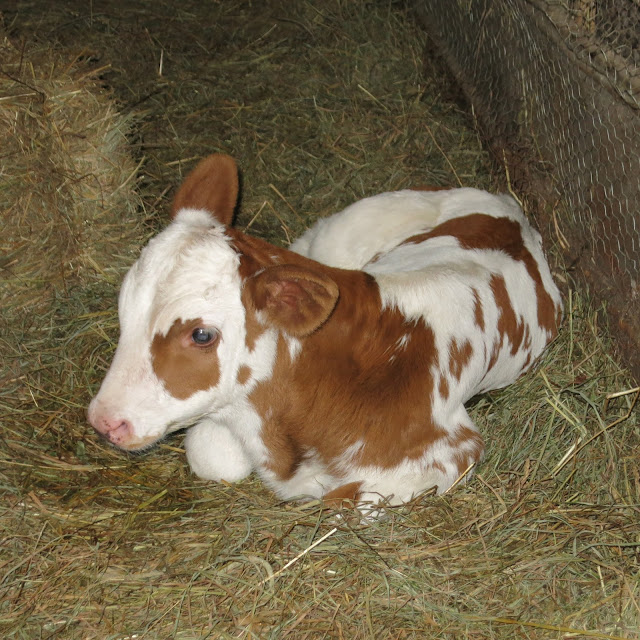 This calf will stay on the farm and be raised here.  When Shannon, the other Ayrshire milk cow, has her calf next month, we will try to get her to adopt this fellow as well so that he will have a mom and friends to play with.  As a purebred dairy cow, Shannon will produce far more milk than one calf can possibly consume.  If she does not have at least one more baby to feed, she will have to be milked out by hand or risk life-threatening mastitis.

This calf will be raised for beef, but he will never leave the farm, never be trucked to a feedlot and never be separated from his herd.  He will be raised on grass pasture and live as cows are meant to live.  His presence will be good for the soil he runs on, the plants he grazes and the farm he supports.  His manure will replenish the soil and never run into nearby streams.  He will live like a king for two years and then meet a quick, painless end without ever leaving his home or knowing a day of strife.

I know there will be people who are appalled at the idea of eating this beef, but we feel very strongly that it does not matter what you eat, it matters how that food was raised.  This applies to soy beans and tomatoes as much as to beef or lamb.

Jane is hanging out in the sheep pen for the moment. 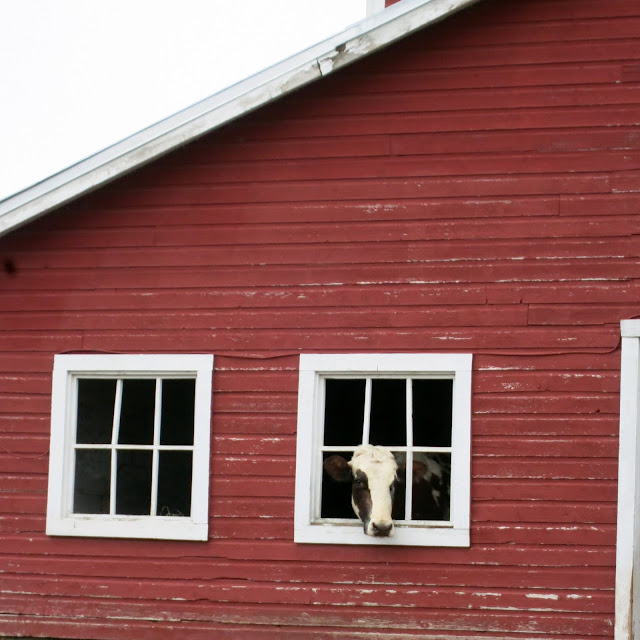 Jane is very odd in that she won't have anything to do with her own calves and instead, gets fixated on Farm Buddy and acts as if FB is her calf.  Jane has been known to gallop through fences in an effort to get to her "calf" when she sees FB, so she is staying in until she settles down.

This is Jane's fixated, crack-head stare.  She is watching FB and mooing at her to come back.  Fortunately, there is a manger in front of her keeping her from trying to jump through he window.   She is thinking about it though. 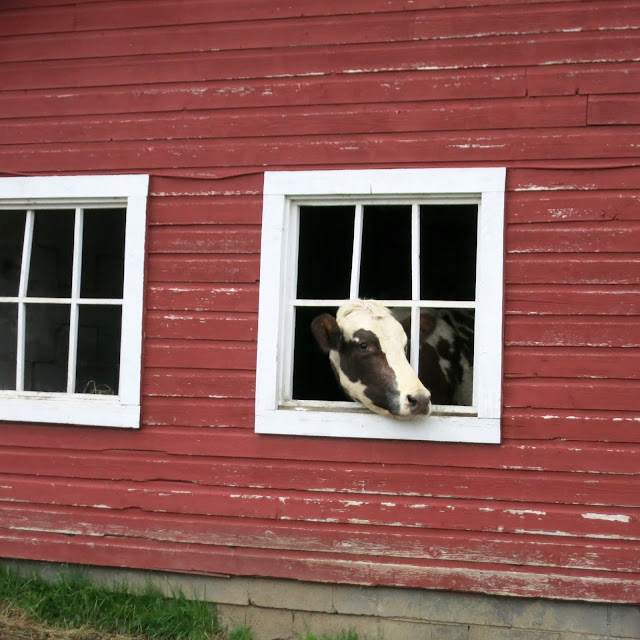 Jane does settle down and she does becomes an excellent (if neurotic) milk cow, which is why FB keeps her.  Crack-head Jane is addicted to her oxytocin high and FB is addicted to dairy.  It is one of those awkward, co-dependent sort of relationship.  Truly, a modern day romance:) 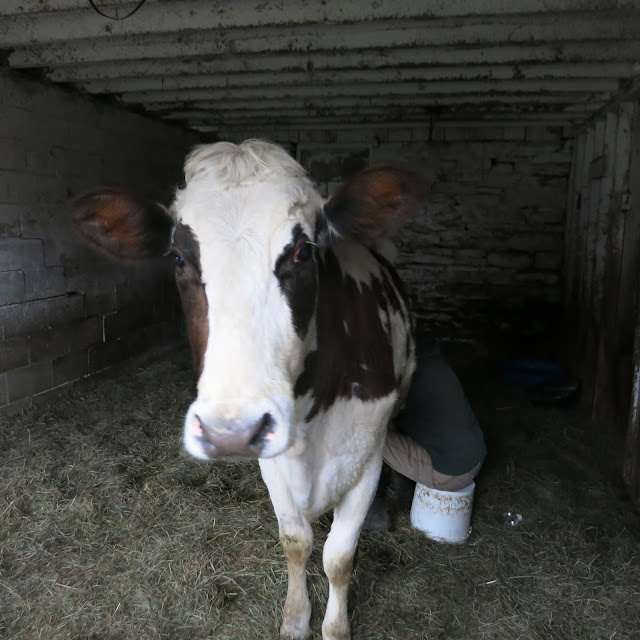 Posted by The Dancing Donkey at 1:08 AM