In between some of my other Easter projects, such as taking the snow fence down, I worked on washing one of the fleeces.

(The snow fence worked great by the way.  We got almost no snow this winter, so I figure it did its job of fencing out snow super well:) 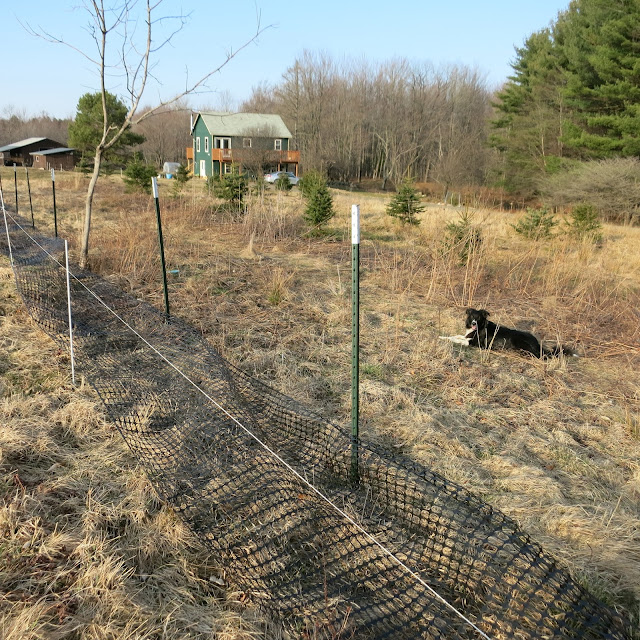 Anyway, in between fencing, I gave some thought to the wool conundrum.  FB's water heater won't adjust upward, but she has the top-loading washing machine.  My water heater is adjustable up to scalding levels, but my washing machine won't work for wool.

Since I had the most important part of the equation, I decided to give it a try.  My methods might be a bit primitive, but people have been washing wool for centuries.  I went ahead on the assumption that it worked before the invention of washing machines so it must still work today.

I cranked up the water heater as high as it would go and started lugging buckets of it out to this old barrel trough. 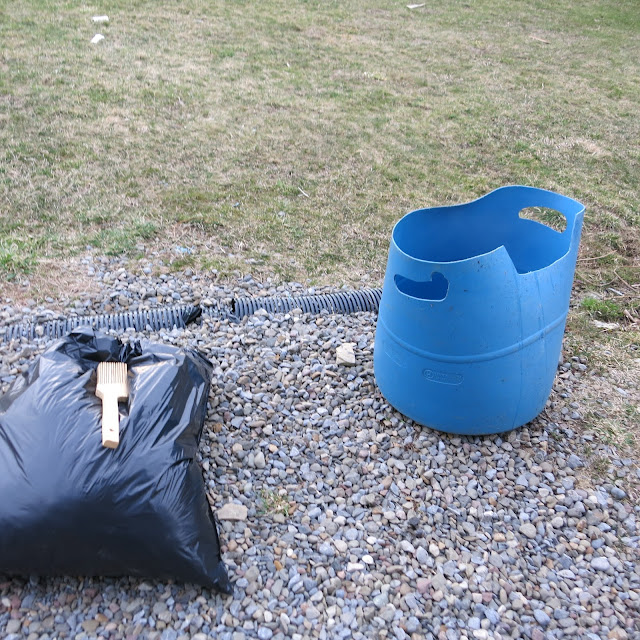 I started with the fleece that I think is the worst.   We have several sheep who have very nice fleeces (according to the shearer) and several more who don't.  This was one of the latter.  In fact, I decided pretty quick that this probably should have been relegated to garden mulch.

I believe this fleece is from Mable, who is the flock matriarch.  I know that only because it has a lot of hair mixed in and Mable is half Katahdin, which is a hair sheep rather than a wool sheep (even I can tell the difference between hair and wool, although, now I think about it, what is the difference?).  Mable grows both hair and wool and her fleece is no good because of it.  I figured it would still make good stuffing for a dog bed and used it as my experimental subject before tackling the better fleeces. 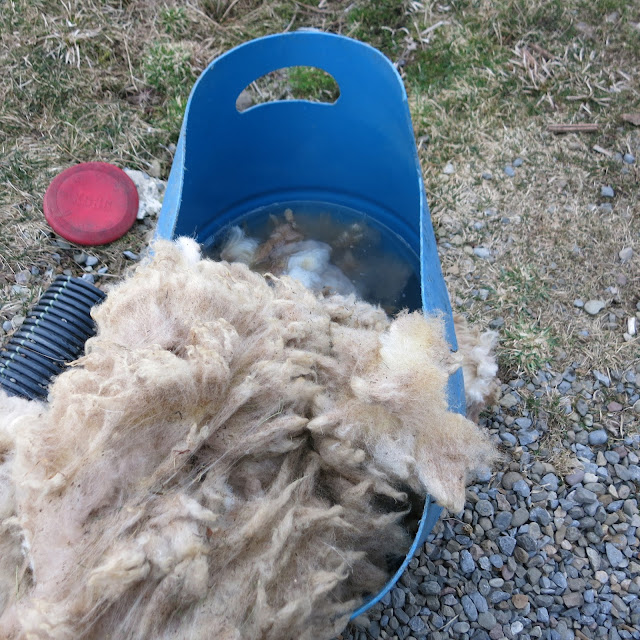 The hardest part was figuring out how to drain it. The only real reason to use a washing machine is to spin dry the wool.  According to all the experts, you never want to agitate the wool as that will make it felt.  While I was pondering what sorts of complicated screens or racks I could try to cobble together, my eye fell on the pile of bee keeping equipment that is still waiting for more attention.  In particular, the metal queen excluders and voila, drying rack for wet fleece.... 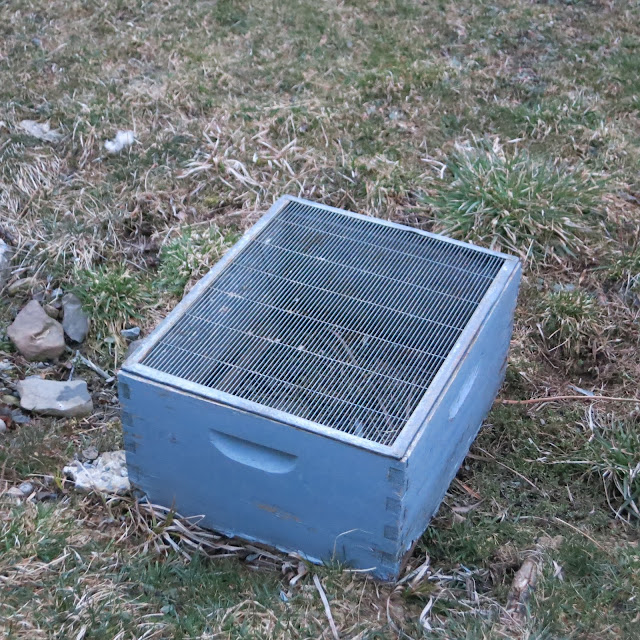 As for why the wool needs to be washed....this is the water from the first soak. 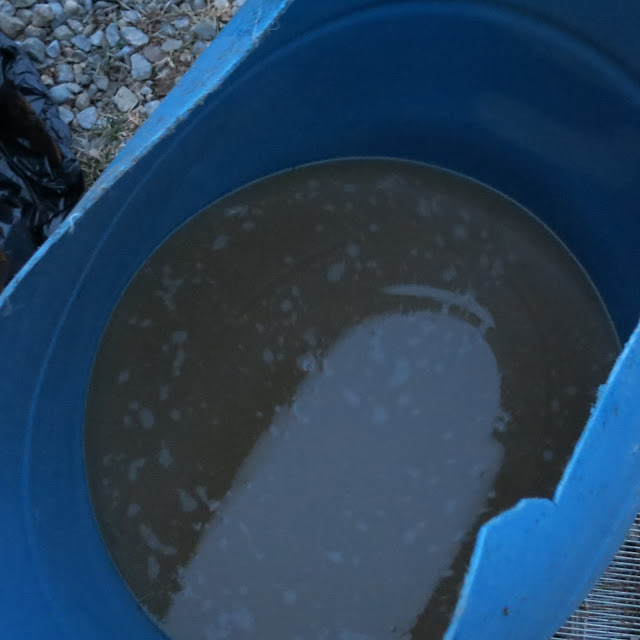 Raw wool is kind of nasty. It is very oily and greasy from all the lanolin, sweat, manure and grime that accumulates from being the outer wear of a living sheep for 12 months.  The smell and grease of raw wool is a bit much.  The dogs wouldn't mind, but I do.  We would also like to use some of the better wool for making bed pillows and I definitely don't want to sleep on raw wool.

This was after the first wash...most of that brown is because Mable has brown splotches, it is not all dirt.. 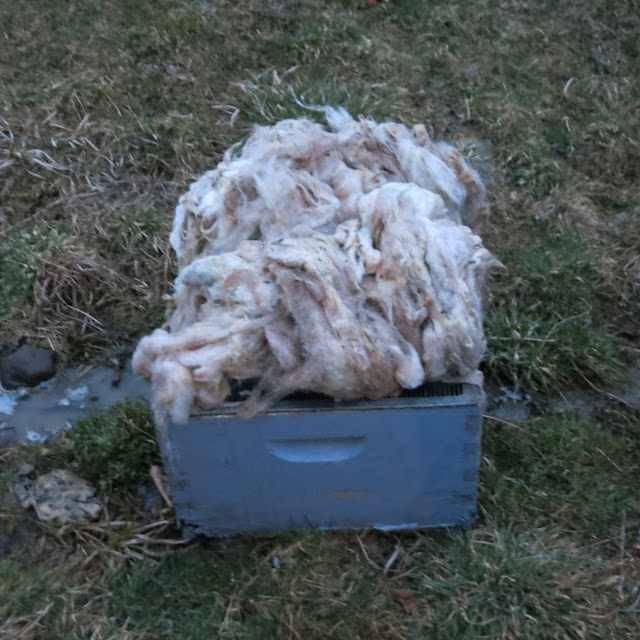 I ended up doing two soaks with hot water and dawn dish soap and two more rinse soaks.  This fleece was really grimy and it could have used another wash, but by midnight, my enthusiasm for cleaning a crappy fleece was wearing very thin.  It no longer smells and I have left it on the racks to dry.  I'll see what it looks like in the light of day.  I doubt I'll ever want to lay my head on this fleece, but I don't think Connor will complain.  If he does, we can always give it to the cats:) 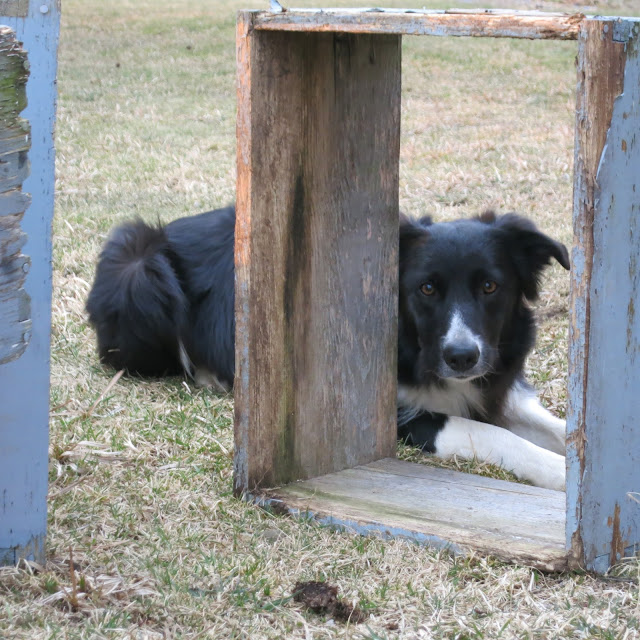 Posted by The Dancing Donkey at 11:40 PM