I am finally making progress on the Donkey Nursery.  I am not sure why this project has taken me so long, but it is starting to come together.  It has probably been a combination of having changed my mind about a 150 times as to how I wanted to do this and lousy weather.  I know we have been having a mild winter, but that is a very relative term.  Doing carpentry in 20 degree weather is a true misery and power tools do not mix well with snow, rain and ice.

I want this area to be weather proof enough to be cozy for Emma and her baby, but open enough at the same time so that the windows in the main barn are not blocked.  This is what I finally came up with. These windows are on hinges so they will fold upward against the shed roof in the summer, allowing for maximum airflow and still close everything off in the winter.  I still have to add some exterior trim pieces that will hold everything in place and make it all weather tight.  And of course, the plexiglass. 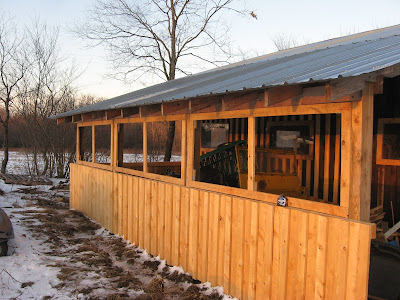 I debated for a long time whether to use plexiglass or heavy-duty plastic.  I am a little worried that the plexiglass could get broken and be a hazard, but I think it will be OK.  I experimented with a small piece that I had and even when it breaks, it does not shatter like glass does and does not become too sharp.  I just don't think the plastic sheeting can stand up to the wind I get here, so plexiglass is what I am going to use.  If I have to, I can add some wire mesh to the inside of the windows to reinforce the plexiglass.

I am feeling that I really need to get this done and move Emma into it.  While she gets along well with both of the horses and is especially attached to Tessa, Gabe does push her around some. He is never mean to her, but he does like to play and he thinks it is fun to chase her on occasion.  He had several other young, rowdy geldings to play with at his former home and he tries to play with Emma and Tessa that way.  It is often too much for them.  He is starting to get the idea that no one wants to play that hard and he is being better about it.  However, as Emma's belly gets ever larger, she gets ever slower.  I don't want her to feel that she has to run away from him.  I also don't want Gabe anywhere near her when she does have the baby.  He is very protective of his territory and does not allow strange animals into his field.  While this is a good thing where strange dogs and coyotes are concerned, I am worried about how he will treat a newborn donkey.  All in all, I am hoping to have the nursery finished within the next two weeks.  Hopefully, Emma will like it and not feel too isolated.
Posted by The Dancing Donkey at 10:41 PM