Sometime things just work out.  I had been reading and greatly enjoying Fenway Barthalomule's blog over at www.braysofourlives.com and I sort of had longears on my mind when I decided to find a small companion for Tessa.  I turned to craigslist and right at the top of the page was an ad that read "Friendly female donkey $200" and only a half hour away.  Hmmm, that could work.  I couldn't get over to see her till the following week and thought for sure she would be sold by then but when I called the guy back he still had her.  I called a couple of friends who both wanted to go see her and off we went.  This is where things get a little strange, of course.

I really must have had donkeys on the brain because the night before I had dreamed of going to see some of them, four of them to be exact.  In my dream, there was a brown, a grey donkey and a little donkey named Emma.  They all had terribly overgrown feet and they all wanted to come home with me.

Well, my friends, our dogs and I all trouped over to see the donkey for sale and I knew I was sunk before I even got out of the car.  Standing in a small field were four donkeys; a brown jack, a grey jenny, her baby from last year, this years baby and, you guessed it, their feet were horribly overgrown.  Weird huh? 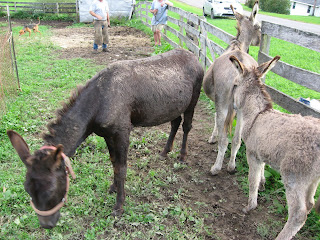 I knew right away that I was going to bring the little yearling home with me but I also knew I had to do something about the feet on the older jack and jenny.  After talking with the owner for a while I realized that he genuinely had no idea about hoof care for donkeys.  It took some cautious maneuvering but I finally got him to agree that I would buy the yearling (Emma) for $100 and I would bring my farrier over to work on the other donkeys feet.  I would have paid him his full price and then some to get those feet worked on but I thought it was important to get him to take some ownership.  This photo was taken on the day that my farrier and I went over and got them trimmed.   We have also set up appointments for the farrier to go back.  I feel the owner will keep up with it now he knows what needs to be done.  I think I have a buyer for the baby when he is old enough to be weaned.  Sometimes, dreams really do come true.
Posted by The Dancing Donkey at 12:05 AM