If you actually made it past the title of this post without getting scared off, be warned, there is more to come.  You may consider this to be TMI, but a lot of mares have problems like the one below and this is generally a very successful option that not many people seem to be aware of...

After giving birth to a big lug like Ramsey when she was only 23 months old, Emma had a lot of stretching of her vulva.  She managed to give birth unaided despite my valiant attempts to be awake when the time came, but she did have a great deal of vaginal bruising after the birth.  The bruising went away within a few days, but the stretching never has.

I had hoped that this problem would repair itself as Emma finished growing up, but instead, it has gotten steadily worse with time.  It is not an issue when she is standing, but the edges of her vulva tend to gape open when she is lying down and bits of straw or shavings tend to get stuck in this most sensitive of places.

This is not only terribly irritating and uncomfortable for her, it is a real health hazard as it can cause all sorts of urinary, cervical or uterine infections.  Constant irritation and an influx of air and/or debris into the vaginal canal not only leads to infection, it also causes increased pain during heat cycles. In broodmares, it is also a cause of placental infection and abortion.

So, what is a poor young donkey lady to do?

Make the long dreaded, but necessary appointment with the gynecologist vet and schedule a caslick's procedure.  This is usually done on mares with poor vulva conformation, but is also a good option for cases like this.  It is also particularly helpful for broodmares (especially those with a tipped vulva or a history of miscarriage), athletes in heavy work or for any mare who has suffered some kind of vaginal injury.  It is quite common to see caslick's procedures on racehorses and eventers.

Basically, the top half of the vulva is surgically closed to prevent any air or debris from getting into places they have no business being.  A very narrow strip of mucosal tissue is cut off from either side of the vulva and then the sides are sutured together so that they will grow back with a clean, tight seal. The sutures generally extend downwards until they are level with the pelvic floor.  This provides good protection without interfering with urination.

Emma has very good conformation in this area and her problems are not very noticable when she is standing, only when she lies down.  On the left is before and the right is shortly after the procedure.  There is some swelling caused by the local anesthetic - that was gone within a few hours. 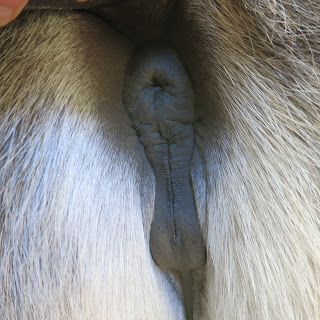 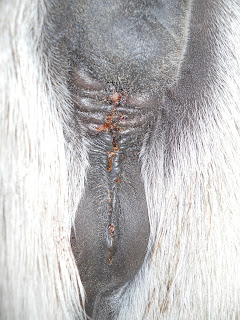 If I ever decided to breed Emma, this would have to be undone or giving birth would cause very severe tearing.  However, much as I would love to have more baby donkeys to play with, Emma will not be producing them.  Breeding Emma would not be a safe or responsible thing to do.  She should not have been allowed to become pregnant at such a young age in the first place, but things like that happen in neglect cases.

The Caslick's procedure should significantly decrease Emma's risk of infection and improve her quality of life since she will no longer have to deal with the constant irritation of having hay chaff in the worst of all possible of places.

That is what I keep trying to tell her anyways.  I am not sure she is convinced yet.

She had the procedure done the Wed. before Thanksgiving and she is only just now starting to talk to me again.  I can't say as I blame her having been through more than my fair share of tortuous encounters with the gynecologist, but it really is for her own good.  I am sure she will forgive me eventually.

Posted by The Dancing Donkey at 12:38 AM