"Hello blog world, Ben here.  I've heard about this blog thing for a while now, I'm a bit dubious, but I feel that it is important to tell this story so that others will be aware of a grave danger that they may encounter.

Last year, about this time, my human, who I am generally quite fond of, was possessed by a dark, evil demon who led her to do a terrible, awful thing.

I must preface this terrible story with some facts that you may not be aware of so that you can fully comprehend the evilness of this foul deed.  Watering holes are very dangerous places for a donkey, they attract predators and one can never know just what sort of monster is lurking in those shimmery depths, just waiting for a tender, delicate muzzle to be lowered into reach of claws and teeth.  Water must always be approached with wary, careful, alertness.

Now that you know this, imagine my horror when the water trough, our only source of life sustaining hydration, was invaded by a monstrous demon of such hideous ferocity that just the mere thought would make your ears curl.  It had a huge, gaping, black maw surrounded by terrible, fierce fangs dripping with saliva at the thought of sinking themselves into a velvety soft nose.  It was covered in flat, grey scales, the color of ugly, slow death.  Behind it was a long, slithery, snake like tail coiled all around with venomous tendrils.

As if this were not bad enough, my human, the one Emma and the Little Brown Devil call Ma, the one, as I mentioned, I am fond of - she was taken over by this dark, fearsome spirit.  Under this foul influence, she did her best to convince me that the monster was harmless!

She succeeded in this awful plan with the others of my herd.  They fell, one-by-one, under her tainted spell.  I was not surprised when the horse gave in, she has impaired auditory senses after all.  She is only a horse and can't be blamed for her failings, but the other donkeys....Oh, the terror of it all.

It was a dark, dark time indeed.

Fortunately, I was able to holdfast to my true donkey nature and eventually, it broke through the noxious spell that had been laid upon my human.  She finally shrugged off the evil taint and, with her help, we were able to banish the monster back down into the lowest regions of Hell from whence it had spawned!

I tell you this story as a warning so that you will be aware of this danger and can recognize it when you see it.  My fellow equines, do not let your guard down! These monsters can creep into your world and you must remain ever vigilant.  Keep a sharp eye on your humans, lest they be taken over by the demons and start placing these items in your water.  BE CAREFUL!!!

So that you can more easily recognize the demon, I have convinced to human to include a photo of it.  This may be hard to look at, but for your own sake, I beg you, do not turn away!" 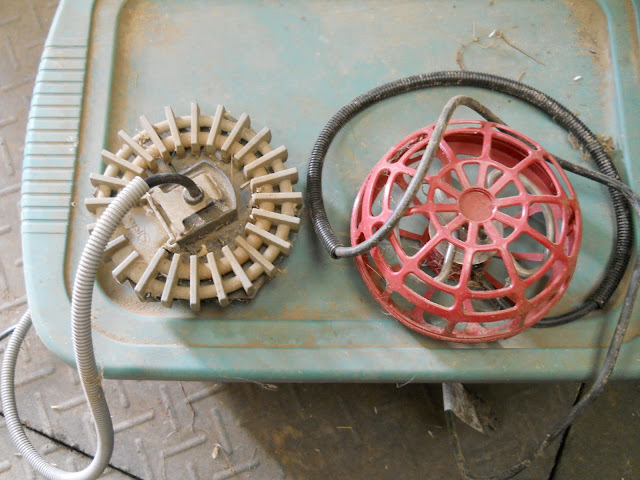 Blogger's note: For anyone who may not recognize these, they are stock tank heaters that keep the herd's water from freezing in the winter.  They are both new.  I gave up on the grey demon on the left after two weeks and bought the red one.  I was finally able to convince Ben that the red heater would not eat him.


Posted by The Dancing Donkey at 5:01 PM