Over the past twenty odd years, I've had reason to wrap a lot of hooves.  I've tried just about every wrap horse people have dreamed up, including diapers, inner tubes, casts, duct tape, vet wrap and assorted layers and variations of all of the above.  I've had a lot of practice wrapping hooves.

I'm not going to go into exhaustive detail about all of those wraps.  There are as many variations on hoof wraps as there are reasons for needing them in the first place.  Everyone has their favorite and certain situations may require something specific.  However, I have come up with a go-to default hoof wrap that I use as my first line of defense for hoof ailments.

My favorite wrapping material these days is a 2 inch wide Elastikon bandage. 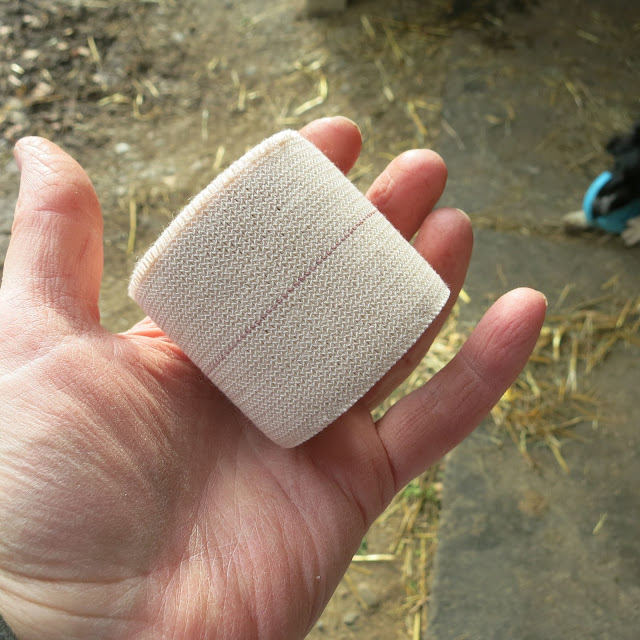 These sell for around $4-5 a roll, which may seem a bit pricey if you have to buy a lot of it.  However, I generally get between one to four weeks out of each wrap I put on, depending on the size of the hoof and the environmental conditions.  Really wet, muddy ground will chew these up pretty quick.  I have had them last as long as five weeks in really dry conditions.

For treating abscesses, bruises, minor puncture wounds or for simply conditioning weak hooves, I like to use Magic Cushion under the wrap.  The stuff kills germs, relieves pain and forms an air-tight, water-proof, antiseptic seal over the bottom of the hoof.

I apply a generous layer over the sole and frog, but I am careful not to get it on the outside of the hoof wall or the heel bulbs. 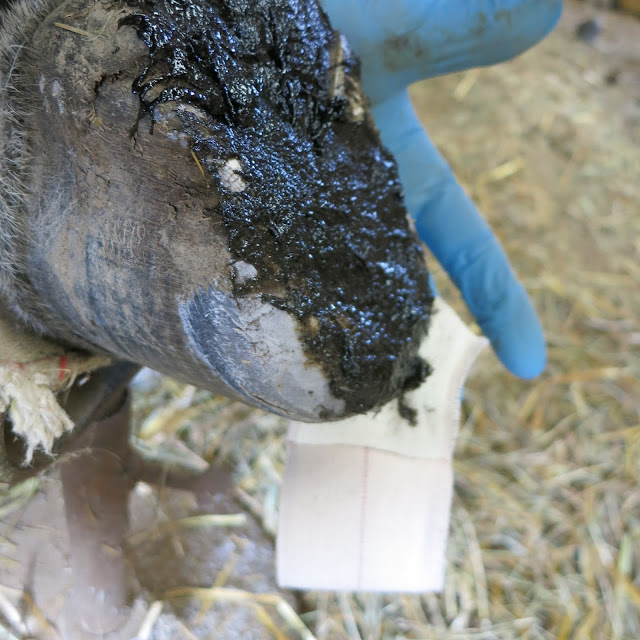 Wear gloves for this as Magic Cushion is a sticky, tar-like substance that will stick to everything.  At the same time, it will prevent the Elastikon from sticking to the hoof wall.  I want the bandage to stick to the outer hoof wall.

While holding the hoof up, I start the bandage at about the 10 o'clock point on the medial side (toward the middle of the horse) of the outer hoof wall and make a full circuit around the hoof.... 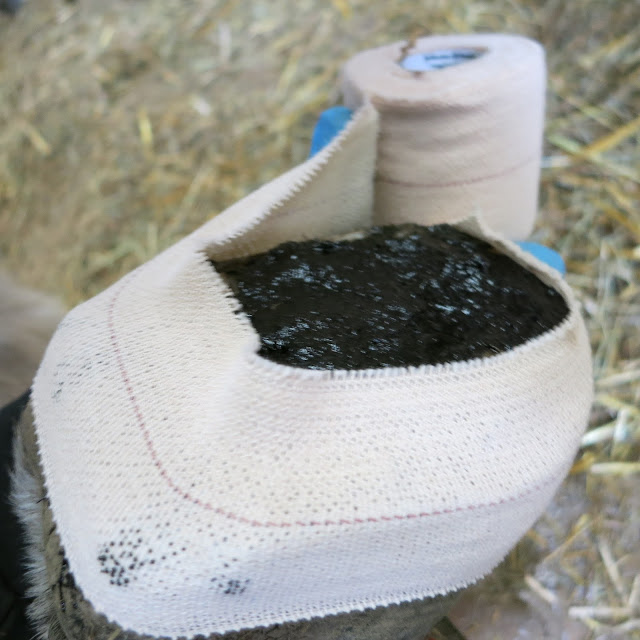 When the bandage gets back to the 11:00 point, in front of my thumb, I pull it snug against the front of the toe.  As the wrap comes over the sole or behind the heel, I loosen the tension just a bit so that I do not over-tighten the wrap.  Let the bandage flow smoothly around the hoof without pulling it tight. 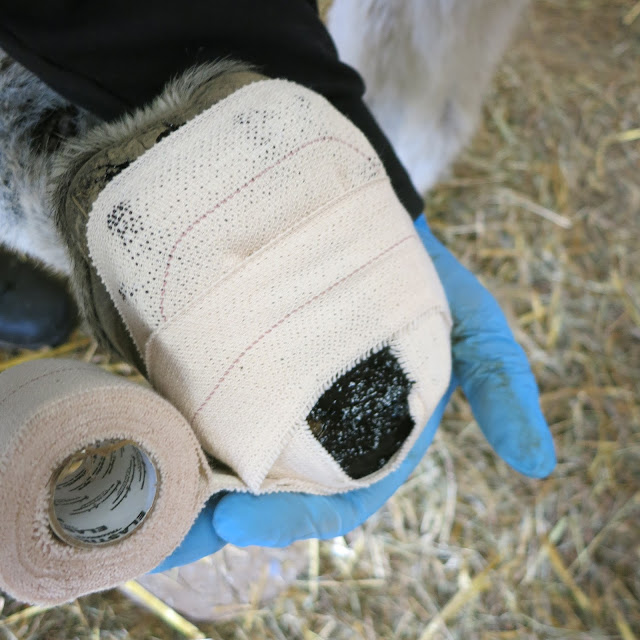 I make several, overlapping passes across the sole to seal in the Magic Cushion (which is going to ooze out the back no matter what you do), and form a pad on the bottom of the foot... 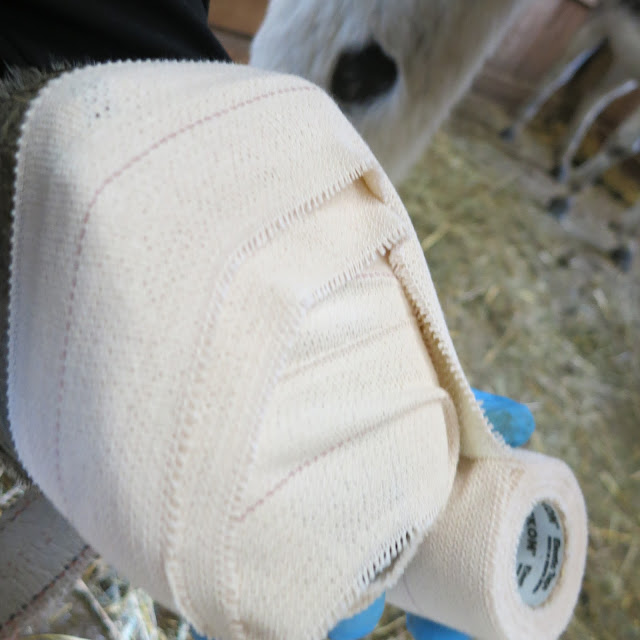 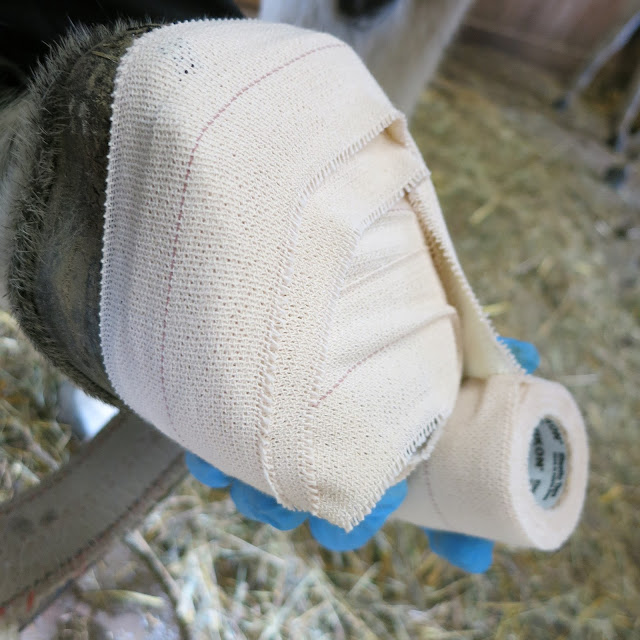 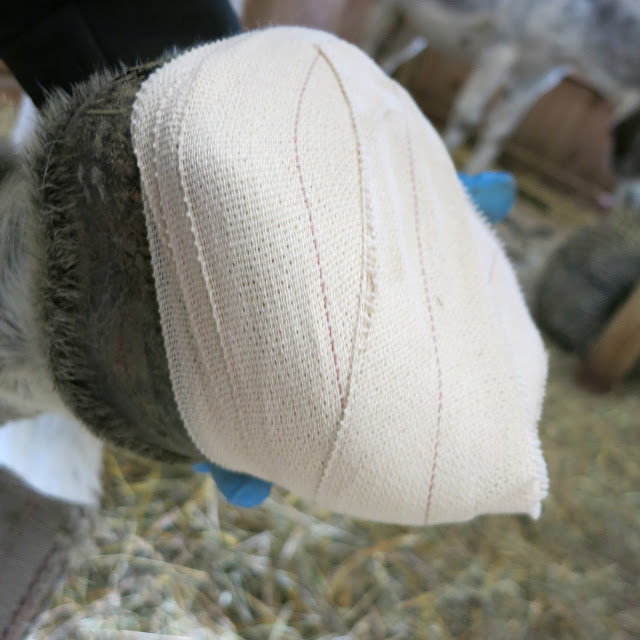 For added durability, this can be covered by a further wrap of duct tape.  The duct tape wears out after a few days, and can be peeled off or reapplied depending on how long the wrap is needed.  Duct tape can add a week or two to the life of the wrap when it is used as a sacrifice layer. 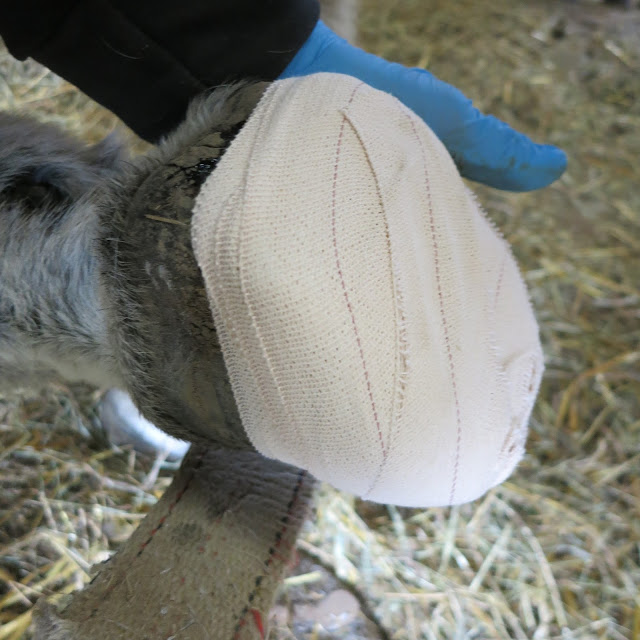 If the foot needs to be medicated daily, then longevity is not an issue and a lighter wrap may be appropriate.  However, if you need a bandage to stay on, this is the best choice.  Wraps fall off because the hoof expands and contracts with every step and every wrap will eventually loosen as a result.  This will stay on because the Elastikon adheres to the hoof wall and flexes with the foot.

If you are treating an abscess, the longer the wrap stays on the better in most cases.  If there is a hole in the foot, this wrap will prevent further injury or reinfection.

From the outside, the wrap should cover most of the outer hoof wall so that the Elastikon has plenty of surface area to adhere to.  However, it is never a good idea to cover the coronet band.  Doing so will restrict blood flow to the hoof and can seriously impair hoof growth.

The wrap should stay at least half an inch below the hair line and if the wrap accidentally extends up too far, cut it back so it is below the hairline.  If the wrap is only going to be on for a short time, it is OK.  However, for a wrap that will be on for any length of time, keep it off the coronary band. 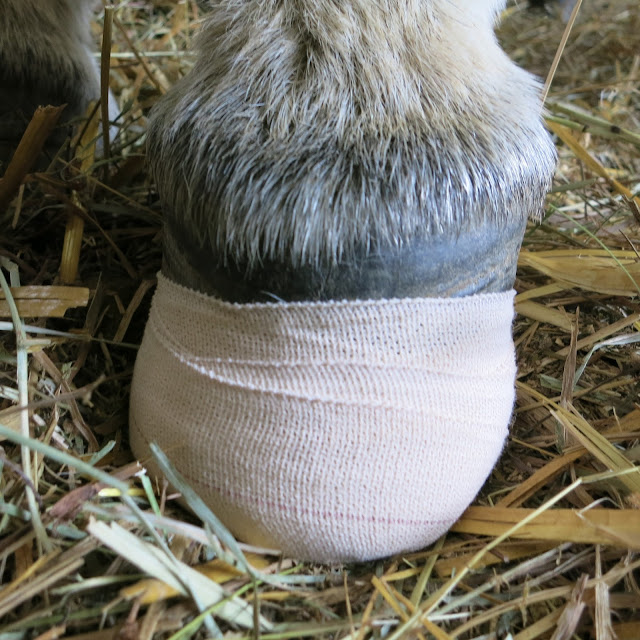 Once the animal puts weight on the hoof, some of the magic Cushion will ooze out the back... 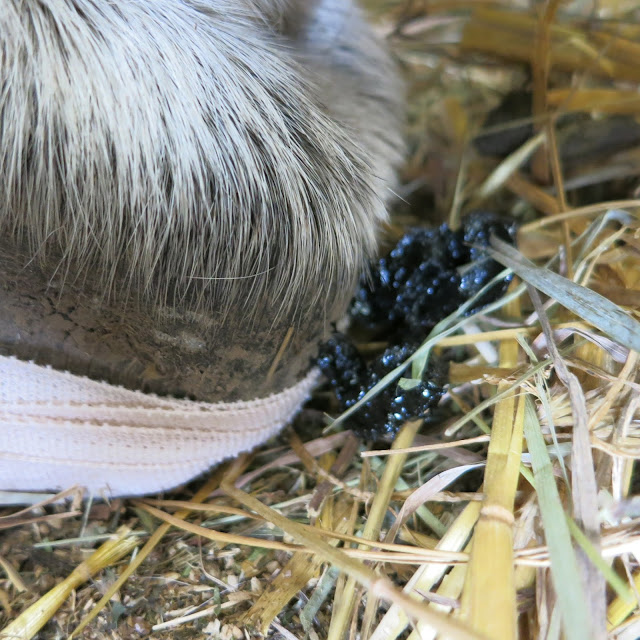 Magic Cushion is great for hooves, but not so good for bare skin, so try to wipe the excess off.  A bit of ooze is inevitable, but won't make too big a mess if the extra is removed after the first few steps. 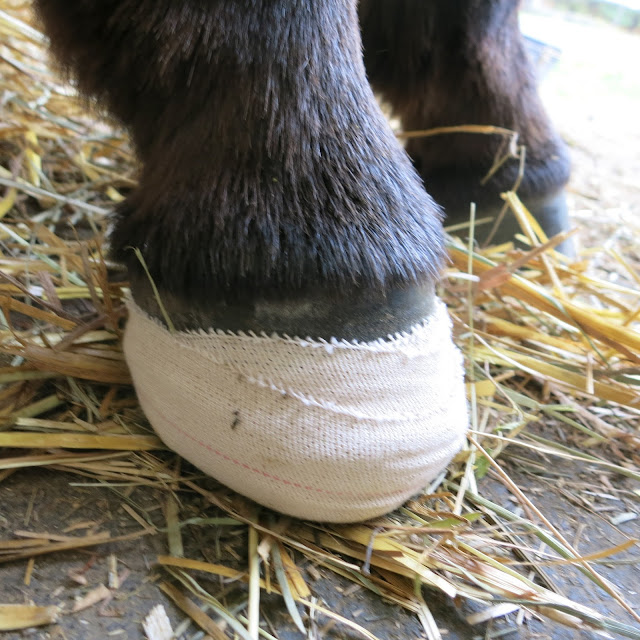 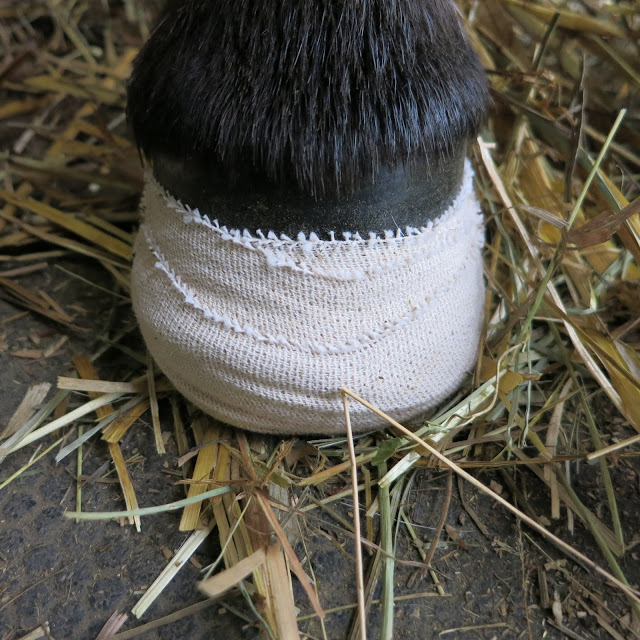 ....as well as larger hooves.  For a draft horse, I would opt for the 4 inch version. 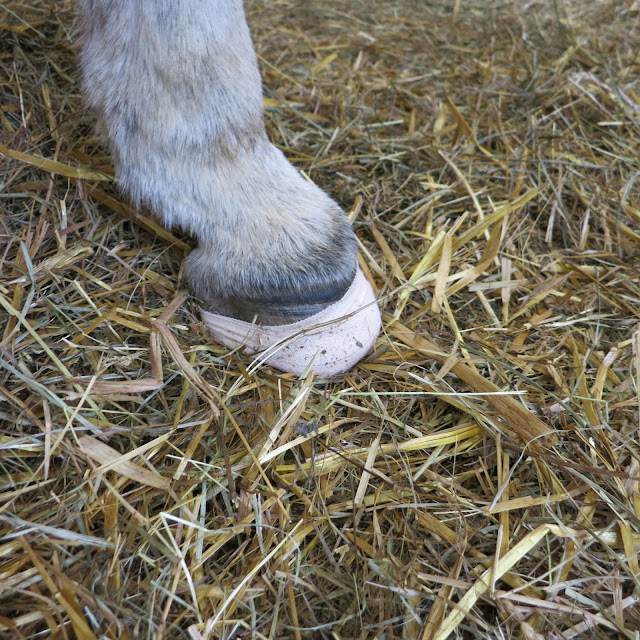 The big advantage of this wrap, is that it won't fall off.  In fact, it can be tough to remove.  I recommend wire cutters to cut through it. 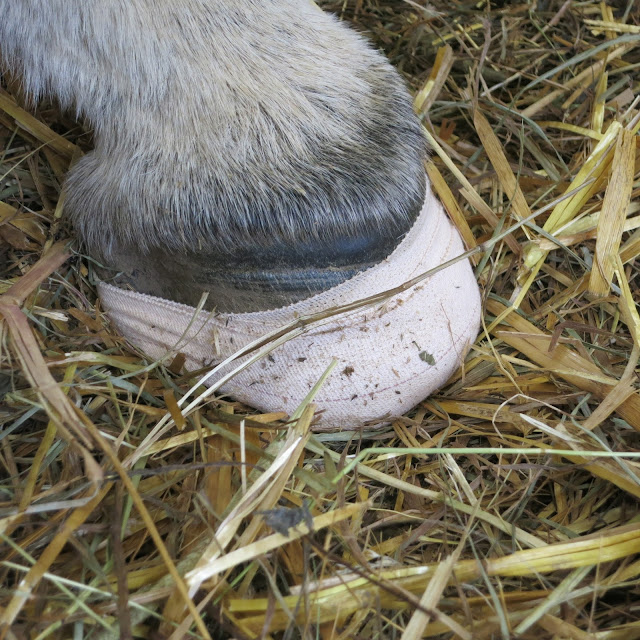 The wrap will wear away at the toe within a few days.  Unless the toe is where the injury is, don't worry about it.  The rest of the wrap will generally adhere to the sole and the frog, which is where it is most often needed.  It will get ratty and nasty looking, especially in the mud, but you will find clean hoof under it when you peel it off. 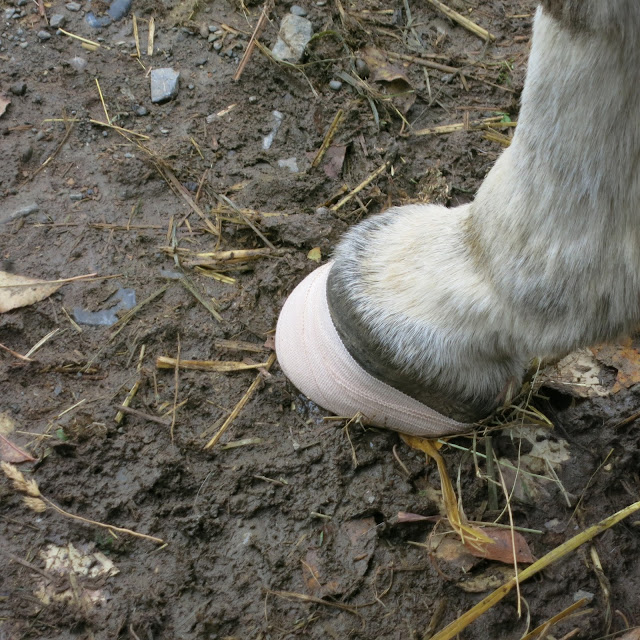 The wrap pictured above was on for ten days in a wet environment.  It looked like hell, but was still protecting the frog when I pulled it off.

Posted by The Dancing Donkey at 12:58 AM