After nearly fifteen years of relatively peaceful co-existence, the local coyotes have called off the truce.  There is a group of at least three young toughs who have gone rogue and become sheep killers.  They are likely litter mates that were born early this year and they seem to be lacking in older adults who might teach them some caution.  They attacked the sheep last week, right in the middle of the afternoon, and killed two lambs.  That might not seem like a huge lose to some of the big farms, but to a small farm like this, it is devastating, both emotionally and financially.

I find it hard to blame the coyotes as they have been under intense hunting pressure in the past few years and this is how they respond.  They breed faster, spread out, expand their territory and become more aggressive.  It is why coyotes are the only predator who's numbers and range have grown rather than declined in the past thirty years.  The harder we try to eliminate them, the more of them there are.

In addition, there is something really pressuring the coyotes right now.  We aren't sure what it is, but they are acting very out of character.  While we all hear coyotes almost every night, they are generally shy and it is very rare to actually see them.  These coyotes are coming out in the middle of the day and they are very brazen, fearless and difficult to deter.  It took both of us AND Connor and Bess to chase them out of the field one day last week.  That is not at all normal.

I respect and admire coyotes.  I also understand why ranchers and farmers hate them.

The question is: What to do?

Bess is doing her job and trying her best, but she is only one dog and can't protect an entire farm twenty-four hours a day.  She is grossly outnumbered and she has to sleep sometime.  Late Sunday night she had a big showdown with a large pack, at least 10-15 coyotes.  Her hysterical barking and the coyote's frenzied response had Farm Buddy heading out in the middle of the night, armed with a single-shot .22, to help Bess out.  She was afraid they might kill her.  One guard dog, no matter how fierce, is no match for an entire pack of desperate predators.

The sheep are going out only with supervision for the time being and we are trying to figure out what to do.  We have talked about different fencing options, adding more/different guard animals, finding hunters to go after them....I suspect though, that the problem won't go away unless and until the coyote population stabilizes once again.  We can only hope that everyone survives that long and then hope that the truce will be resumed. 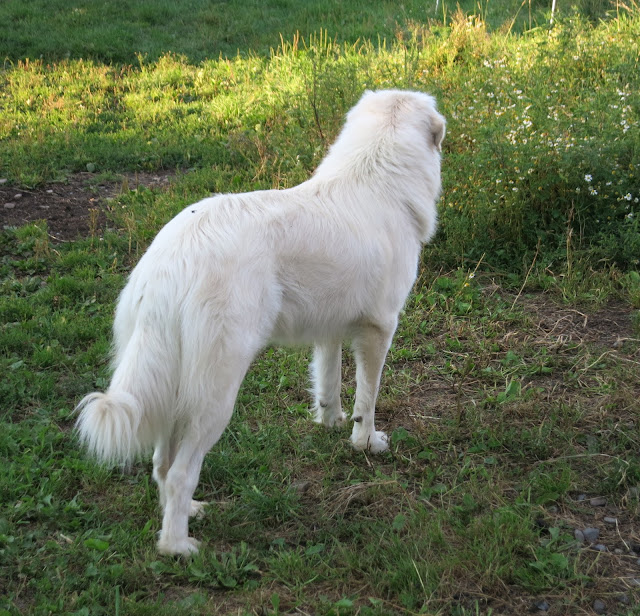 Posted by The Dancing Donkey at 12:51 AM