In between all the hay drama and the heat wave, it also ended up being the weekend for the new honeybees to arrive.  They were supposed to be ready by the first of June, but the late cold spells we had delayed everything.  It is late to be installing nucs, but that is beekeeping for ya.

There are a couple of ways to start a new hive.  You can order "package" bees in the spring from a large apiary in the south.  They put a newly hatched queen in a cage and add either 3 or 5 pounds of bees (yes, they weigh them), depending on what you pay for.  The whole package is then shipped to you in the mail.

The other way is to pull several frames of bees, including eggs, larva, honey and mature nurse bees, out of an existing hive and give them a new queen.  This is referred to as nucleus hive or"nuc".  This is by far a better method than starting with a package, but they are harder to find and must be purchased from a fairly local source.  If none is available than packages are the only way to go.

I have not had much success with package bees in the past.  They tend to do very well at first, but none of them ever survived a winter here.  A few months ago, when I was thinking about getting bees again, I got in touch with a young beekeeper who has just started an apiary a few miles from here.  He was offering nucs and was very local so I ordered two of them.  I picked them up yesterday.

I went through my old equipment and pieced together the makings of two hives. 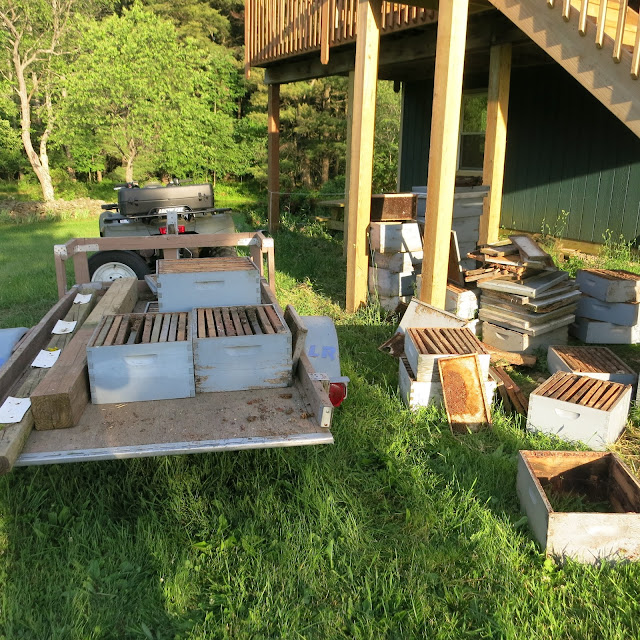 Just barely made it past the inspectors.... 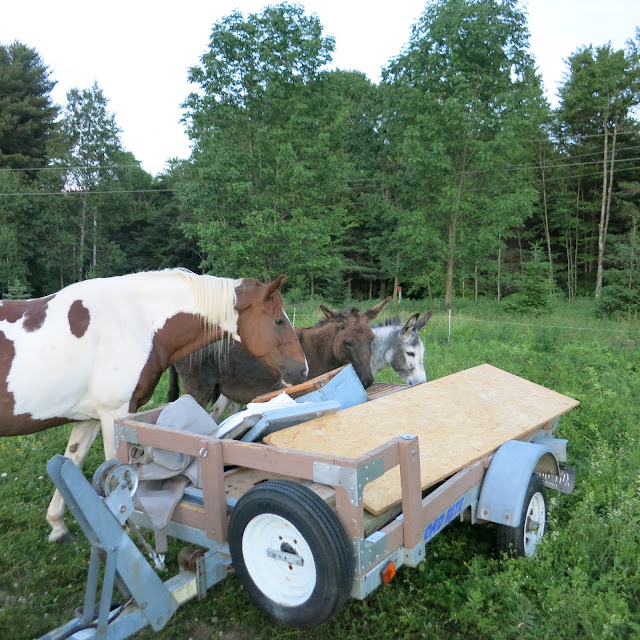 ...and then picked up the nucs last evening.  The nucs are the small, white boxes, which are temporary housing.  The entrance holes are covered with tape to keep the bees inside during transit.  You really don't want a whole bunch of pissed of bees flying around inside the car with you after you pick them up. 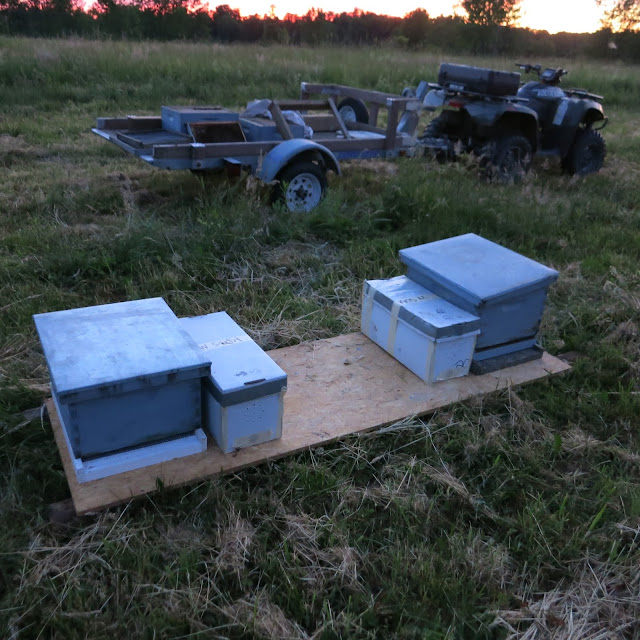 It is not good weather for working bees as it is in the 90's and the sun is intense.  However, I really needed to get these bees transferred into a real hive today as I won't have time to do it this week.  I waited until evening, which is usually a bad idea, but it all went fine.

Each box of a hive holds 10 frames, although I generally use 9 in my hives. 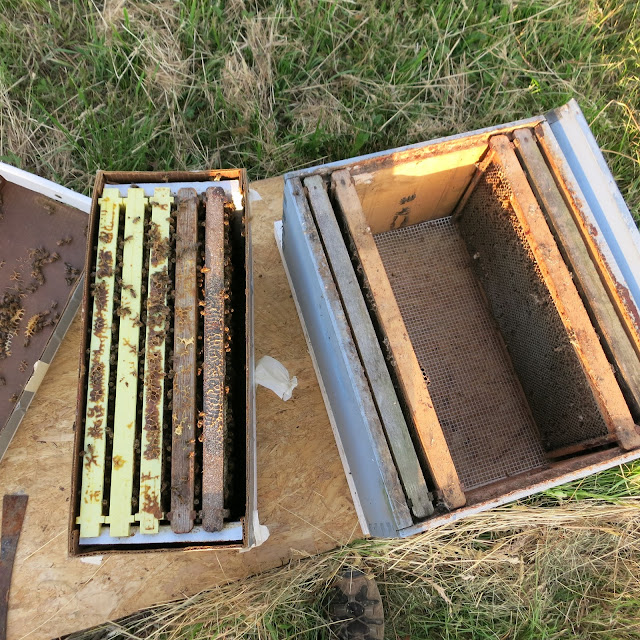 This is a lovely frame of bees.  All of the solid tan portions are capped cells, each holding a baby bee.  These will be hatching withing the next few days, giving this hive a large boost in population. 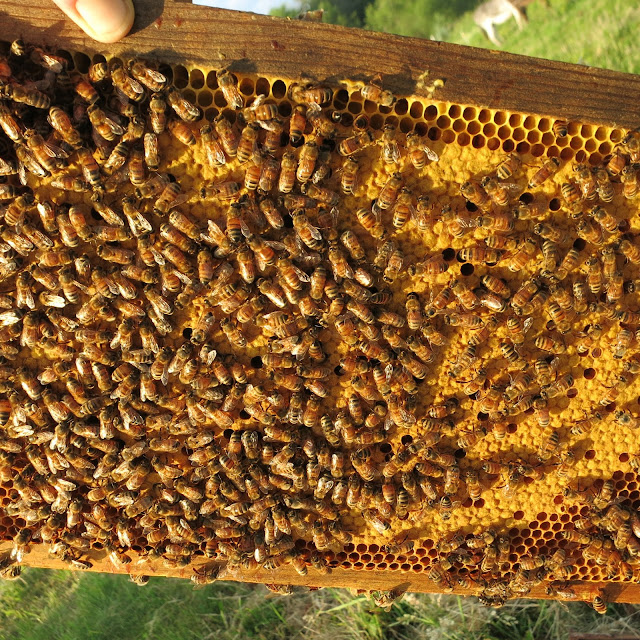 One of the things I like about keeping bees is the way the world calms and focuses when I am working in the hive.  It is a sort of meditation.  You cannot approach a beehive with any type of negative emotion.  Honeybees respond nearly instantly to emotion and sudden changes in emotion will elicit sudden changes in the bees as well, generally not for the good.  If you come to them with calm and appreciation, they stay calm.  Lose your temper or get in a hurry and you better close up that hive and get out of there fast or you will pay for it.  Honeybees know our souls better than we do.

I found the queen in both hives and they were both very busy laying eggs.  Can you find her?  She is the very large bee, center left. 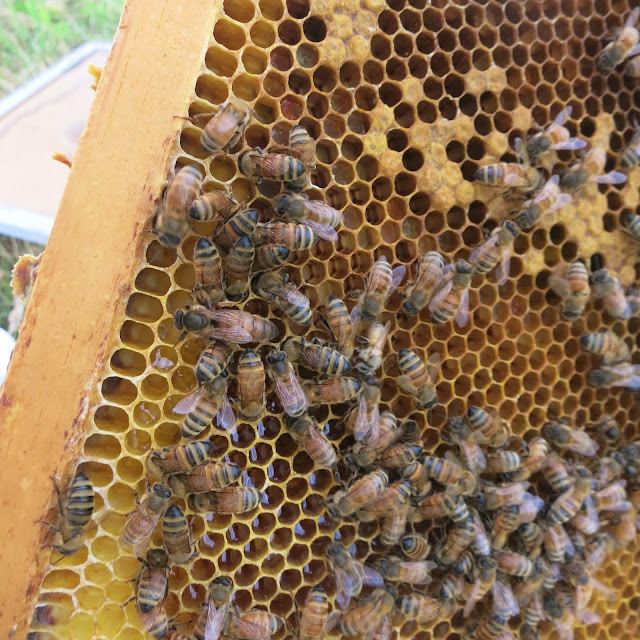 Just left of center again...notice that there is always at least one bee touching the queen with her antennae, the bees gather the queen's scent this way and pass it among the rest of the hive. 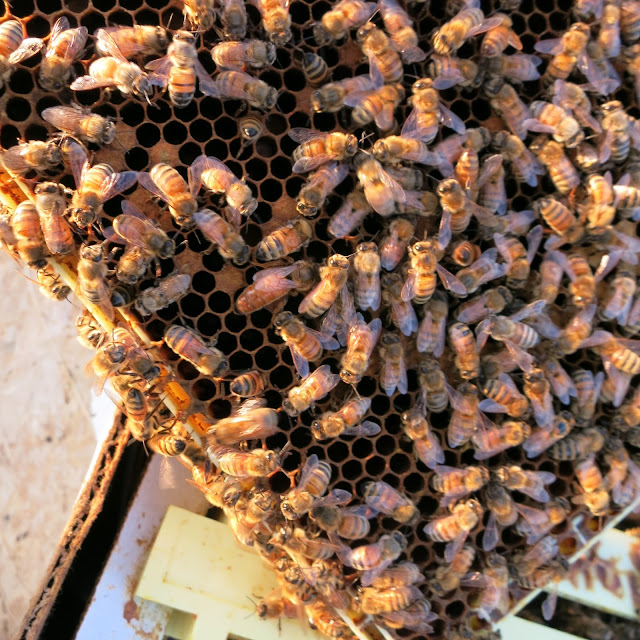 This is blurry, but she is easy to see here, just backing down into a cell to lay an egg with her ring of attendants all around her.  The queen always has attendants. 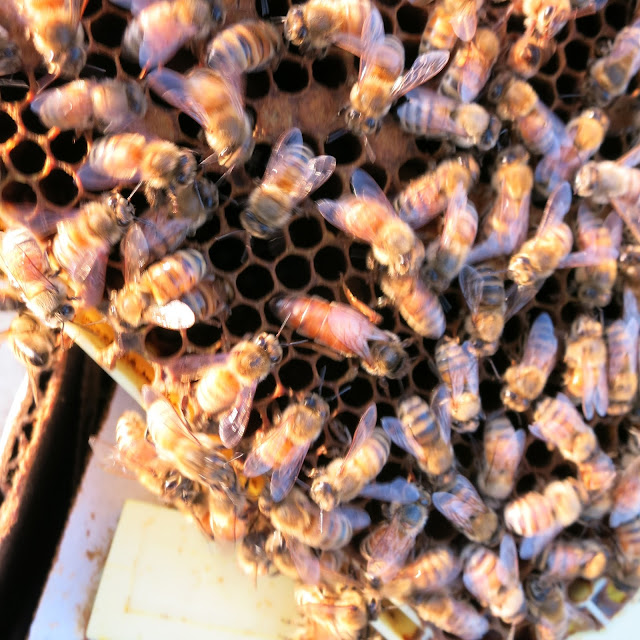 At the end of the day, both nucs are tucked into their hives with an extra box to provide room for all those new bees about to hatch.  It is late in the year for nucs - they have a lot of work ahead of them. 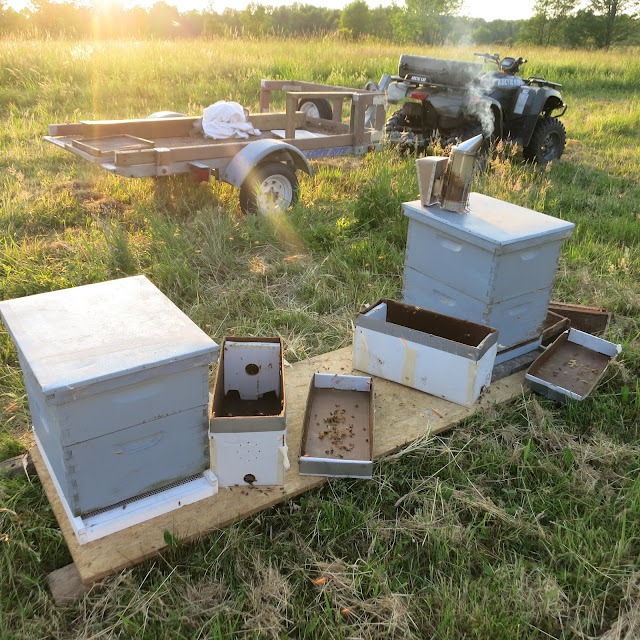 I have my doubts about how the bees will do up here on Hellwind Hill, but I can't help but hope.

Hope, but Don't. Get. Attached.


Posted by The Dancing Donkey at 2:14 AM