Driving home from work at 2:00 am often gives me a rather unique perspective on the world.  If you are routinely up and about at this hour, there are things you will see that just don't happen in the light of day.  It's a mixed blessing that I have about had enough of after 12 years, but no new jobs have presented themselves so here I still am, driving around dark country roads at unmentionable hours.

Last night (technically, this morning), proved to be much more interesting than normal.

I always take Connor over to FB's when I go to work and pick him up when I come home because I hate the idea of leaving him home all alone.  He has great fun over there playing with Bess and I am comforted knowing that he is safe and happy.  Dogs are not meant to be alone.  It is a burden though as it means driving five miles in the wrong way then retracing those same miles to get to work.  Repeat on the way home.  It adds twenty miles a day to my already long commute.

As I head into our little village, I round a corner of a hill and the valley opens up in front of me with the town, such as it is, nestled in the bottom of the hollow.  Last night I rounded that hill and, right off, could see a HUGE fire raging on the other side of the valley.  The flames were leaping so high, it looked like the whole village was alight.  There is a horse farm tucked right into the bottom of the valley, and my first horrified thought was that it might be that barn burning.

With no other options, I just kept going, expecting to see fire crews out working, but I met no one.  The whole village was fast asleep, including the firehouse.  I drove past the dark, sleepy firehouse and could still see a glow.  As I continued on, that glow grew until I came abreast of a house, fifty feet from the road and so engulfed in flames it was already a complete loss.  I stopped and starred in stunned awe for a moment while my exhausted mind raced to remember what I should do.

I laid on the horn trying to wake the neighbors in the house next door and then sped past up the hill to FB's and her phone.  I do not have a cell phone because they do not work here.  I keep one in the car because I was told that you can call 911 on it even though I have no account, but it would not work.  FB's was another mile up the road, but the one place I knew for certain I could get to a phone.

I think I woke the 911 dispatcher as well.  He didn't seem to be taking me all that seriously until he asked if there were people in the house.  I told him that people do live there, but that there was no way that there could be any living thing inside that inferno.  That woke him up a bit and he got the trucks rolling.

With nothing else to do, I collected Connor and headed towards home.  Back towards the fire.  All my honking must have had some effect, because the neighbor was out on the road along with the first set of gawkers.  I stopped to tell him that I had called for help and ask if the house was occupied.  I was extremely relieved to hear that the people living there had moved out just days before and the house was empty.  Exhausted and having no desire to watch what I could already see was inevitable, I left them to it.  I came home, gave the herd a brief hug and crawled into bed with another hug for my dog and a prayer of thanks.

Today, this is all that is left... 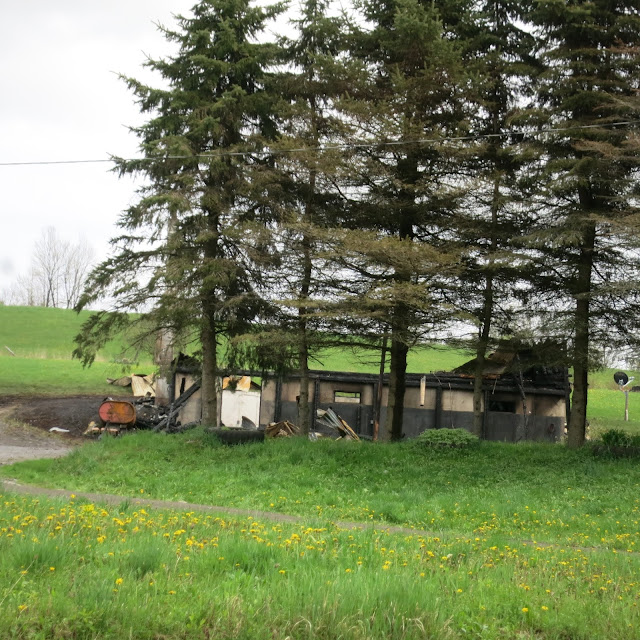 This used to be a two-story, log home, probably 2500 square feet.  The foundation is all that is left and looks almost as if it has been scoured clean.  There isn't even garbage left.

I have always had a fondness for log cabins and would have built one if I could have afforded it. After watching how those logs went up like matchsticks in the unbelievably hungry ferocity of this fire, I don't think I could ever live in one again.  The flames were at least 50 feet higher than the tops of those trees.

It was a very odd and surreal moment, sitting in front of this house last night, watching the insane flames devour every log.  I could feel the intense heat, hear the cackling roar and yet, at the same time, it was a beautiful, quiet May night.  Over the roar of the fire, I could still hear the peeper frogs while the entire town slumbered in quiet peace.  It was like being transported into some alternate universe.

I thought about this a lot today, trying to figure out just why it felt so odd.  It is not the first house fire I have driven past in the night, they are all too common in these old, dry houses whose occupants can't afford updates, but it is the first fire I have come across all alone.  I think it is because the rest of the world remained so detached.  We are all used to seeing pictures of terrible fires and other disasters, but there are always fire trucks, police, officials,....no matter the disaster, someone is always trying to contain it.  Or cause it.

This was a random inferno in the midst of quiet.  If an inferno happens in the middle of a quiet field and no one is around to see it, does it really exist?

Yes, yes it does.

Which is why I will continue to drive my dog 20 miles out of the way each day to make sure that he is never left home alone to deal with an inferno.  I can't live with even the idea of it.

Posted by The Dancing Donkey at 12:39 AM