In the Dentist Chair

I've noticed recently that Ramsey has been having trouble chewing and he has not been his normal cheerful self.  At first, I put it down to teething as he is right in the midst of getting his adult molars.  However, the last few weeks he has been getting progressively worse and more grumpy and, in my experience, a grumpy donkey is a painful donkey.  With that, and vivid memories of the choke episode Emma had at exactly the same age, it was time to call in the reinforcements to do some dental work. 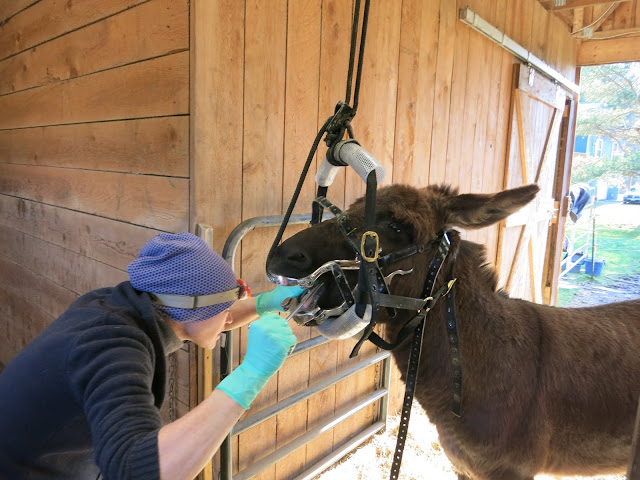 It's a good thing I did, even though my checkbook is groaning under the strain.  What we found were some small, but viciously sharp points. One of them had cut into the side of Ramsey's cheek so deeply that it was nearly through to the outside and the nasty ulcer is nearly two inches long.  You can see the offending points and the awful gash right at the end of the instrument. 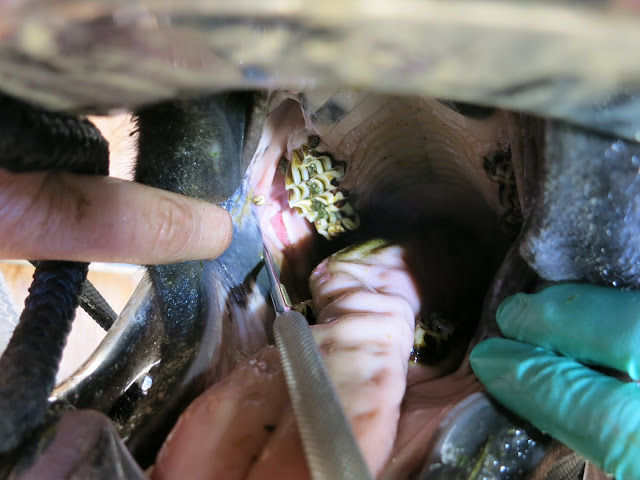 Out came the power tools to file down those awful points and, you can see in this next photo, that those sharp points along the outer edges of the teeth are now smooth. 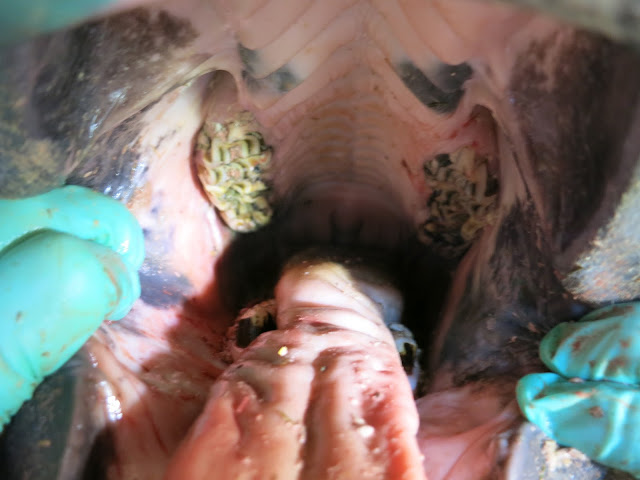 I've heard a lot of people say that young animals don't need dental work and I have even had a couple of vets tell me that dental problems are not common in donkeys.  However, Ramsey is a perfect example of the necessity for good dental care at an early age.  It is especially true for donkeys, as dental issues are their second most common health problem, just behind hoof issues.  Ramsey does have good teeth, those sharp points are common in adolescent equines.

You do need to have a good dentist to work on youngsters.  At just under 3 1/2, Ramsey is right in the midst of some heavy duty teething and any changes should be minimal.  All we did was take down those awful points that were causing so much trouble and left everything else to sort itself out.

Ramsey's front teeth are looking good.  Those four big teeth in the front (two on top, two on bottom) are permanent, adult teeth. Those first four come in at about 2 1/2, the next set on either side come in at 3 1/2 and the last one's on the corners, at 4 1/2.  The brown streaks are just stains from eating grass.  It is totally harmless and no, they don't need to be brushed:) 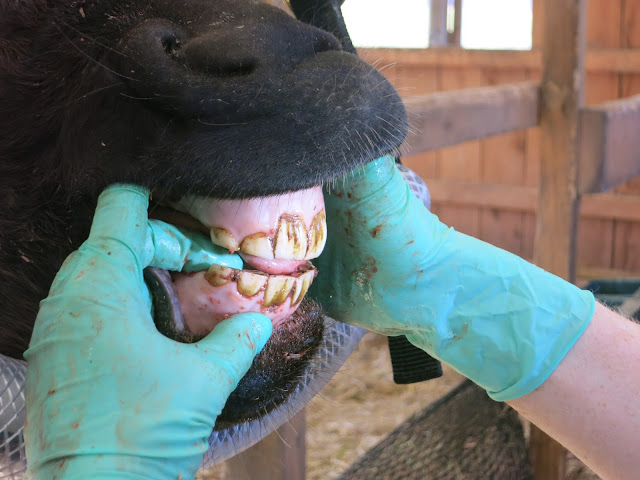 Emma did not escape the dentist chair either.  Shea was not as bad as Ramsey, but needed some attention as well. 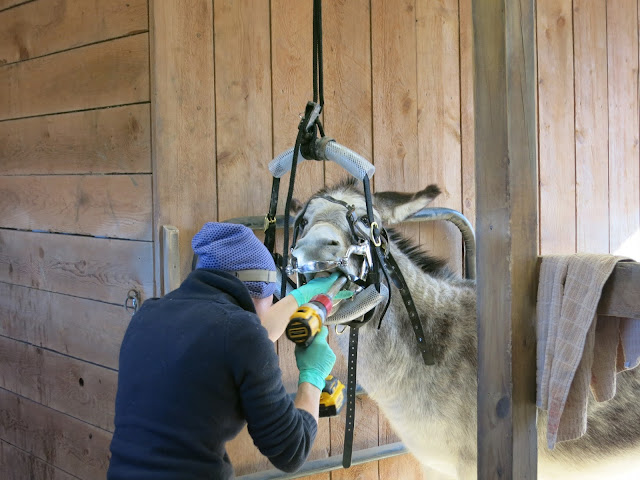 At just over five years old, she has all of her adult teeth now and you can see that they look more level than Ramsey's did.  Equine teeth continue to grow throughout the animal's entire life, which is why they need regular checkups. 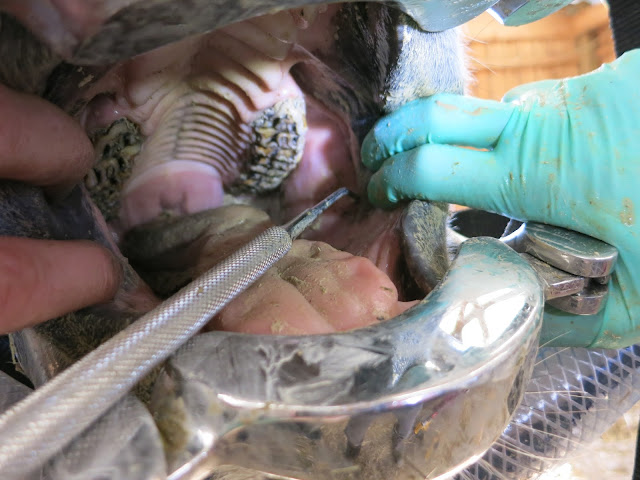 Two drunk donkeys sleeping it off.  I wish I had been able to film drunk Ramsey, wandering about, trying to get into all his normal mischief only slow, staggery and slurring his words. 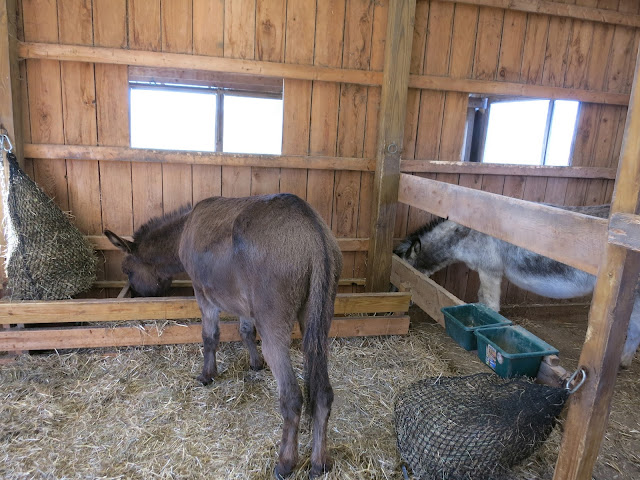 Genetics are an amazing thing.  If you look at the above picture, not only do they both have their heads stuck in a corner, they are snoring in unison and, if you look close, you can see that their legs are in the exact same position, with the right front slightly cocked.

Eventually though, it was time to move out into the sun to finish waking up. 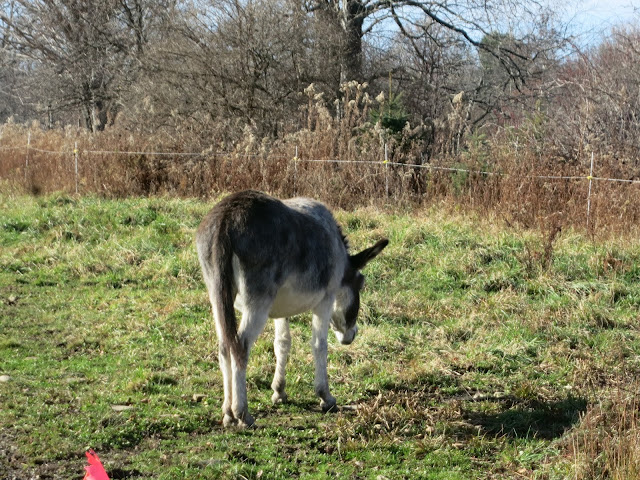 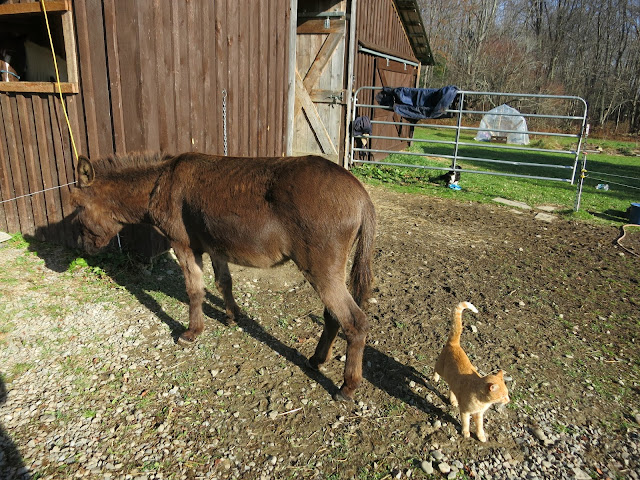 And finally, back to normal and chewing happily once again. 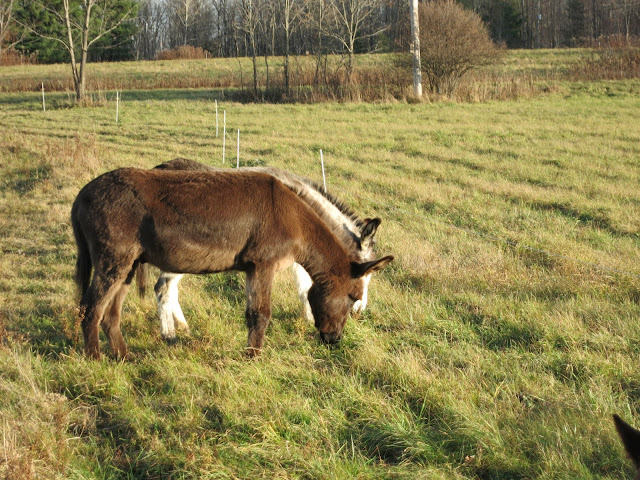 Posted by The Dancing Donkey at 9:34 PM