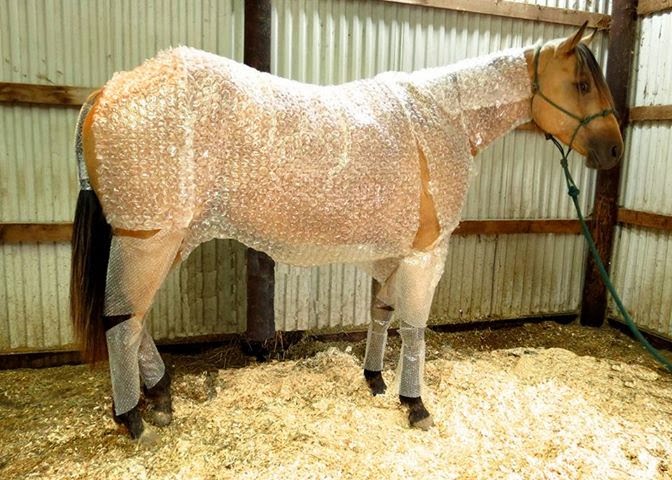 Yesterday afternoon, after snow-blowing again(!), I took Tessa and Co. for a walk.  Much fun was had by all in spite of the ever deepening snow.  When we returned into my back meadow, Tessa and Ramsey had a rousing gallop in two feet of snow.  There was much bucking, kicking and general hilarity (although poor Emma had to stay with me and help keep order).  I finally managed to coax my reluctant herd back to the barn and all was well - except....why the HELL is there a spot of blood on the snow?

My first panicked thought was that Ramsey's foot had fallen apart again, but no, he is well as is Emma.  I picked up Tessa's foot though and found this.... 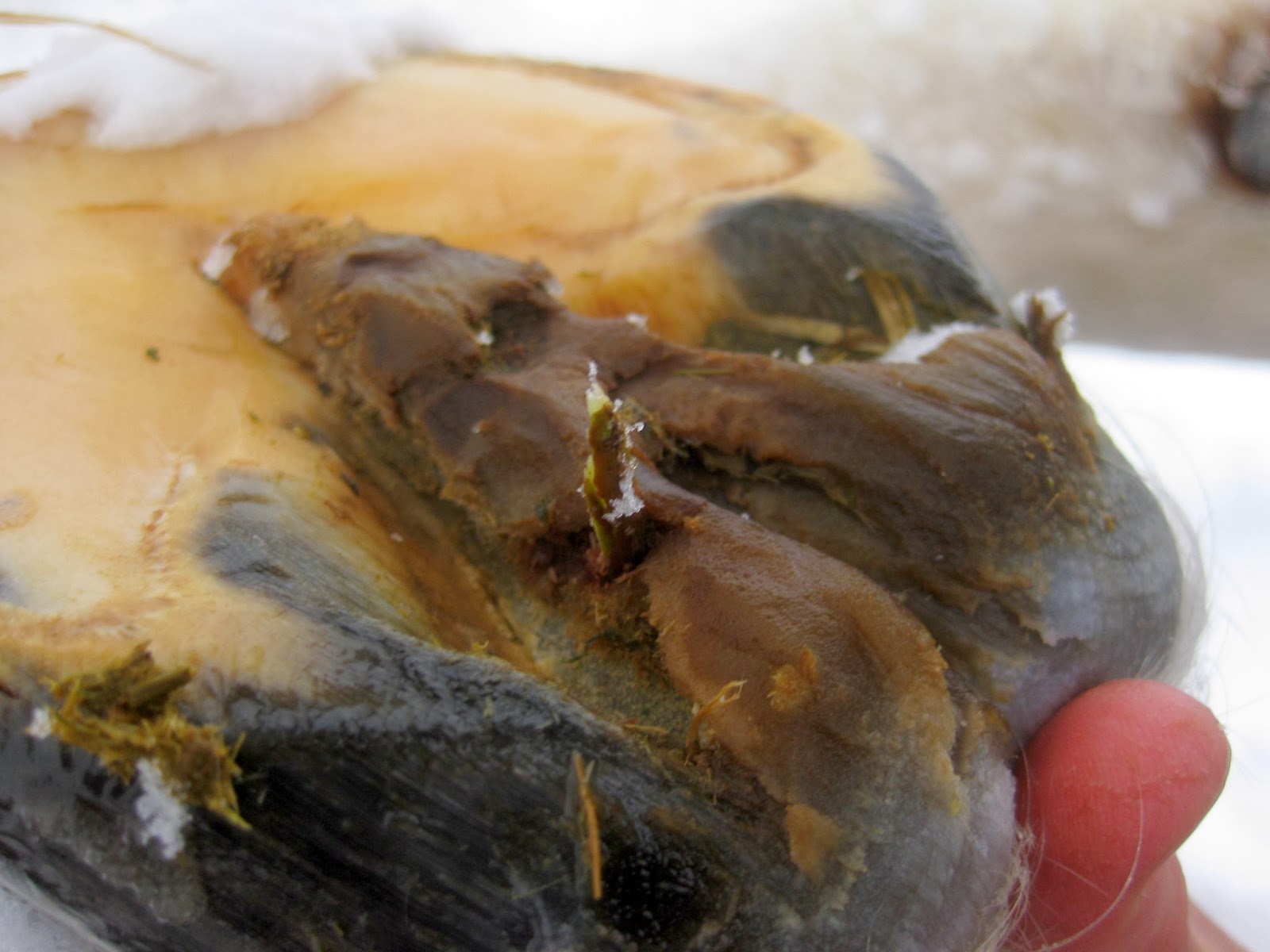 Sorry about all the swearing, but sometimes, it really is the only thing to say. 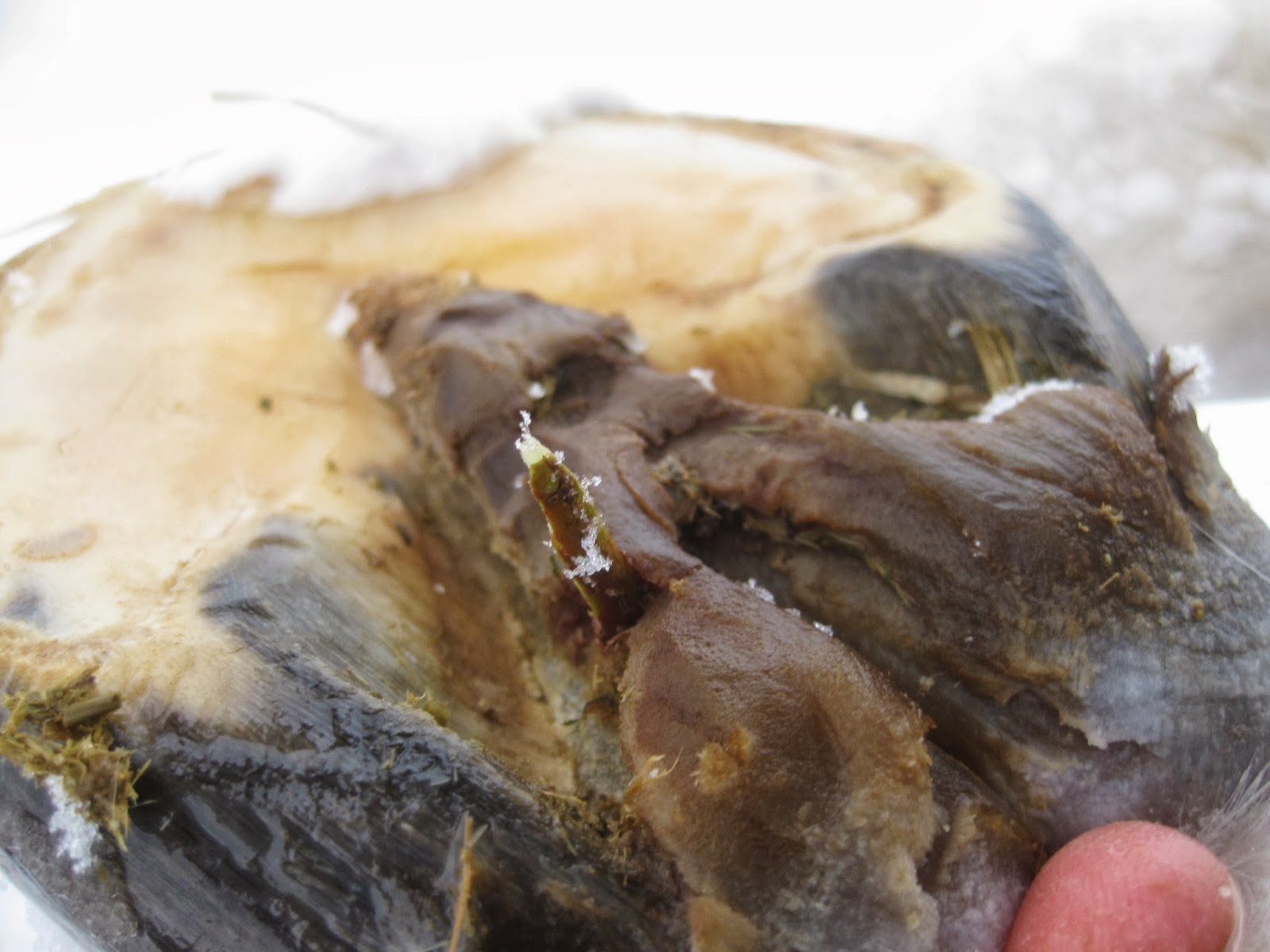 In dealing with puncture wounds in the hoof, it is usually a good idea to get x-rays before removing the offending object.  However, it was late Saturday afternoon, the road conditions were terrible and the nearest vet with a portable x-ray is at least two hours away in good weather (which i can't even remember at this point).  All that also assumes that a flower stem would show up on x-ray, which I don't think it would (although I may be wrong there, I am no expert on X-ray technology).

Added to all that, every moment the stem was being driven deeper into the hoof and shattering into splinters.  The only hope of getting it out intact was to do so immediately.  As it was, the part you can see in the above pictures broke off as soon as I touched it.  I had to use my hoof knife to pare away enough frog to be able to get a forceps onto the stem.  This is what I pulled out, it was buried 3/4 of an inch and the splintered end was inside the foot... 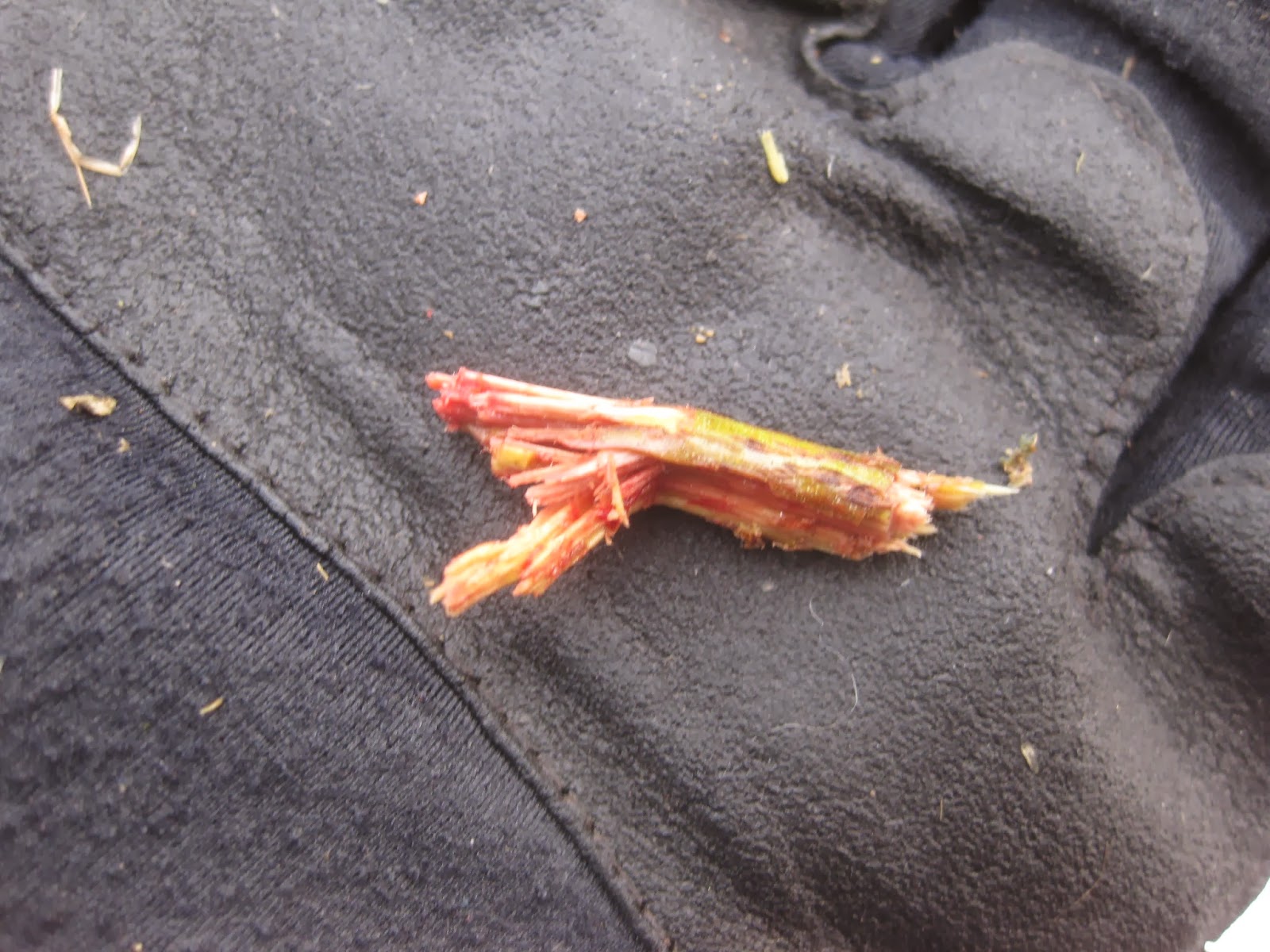 The wound bled profusely when this was removed, which is a good thing.  The only other good things are that I had kept Tessa out of the barn and in the clean snow, her foot was as clean as a hoof ever gets and the stem could not have been in her foot more than a few minutes.  I left her in clean snow until the bleeding stopped (there has to be something good about snow) then applied a thick layer of Magic Cushion and wrapped the foot.

I have mixed feeling about soaking a fresh puncture wound.  Some vets recommed that , some don't.  In my experience, soaking can help draw out infection, but in a wound this fresh, soaking was likely to just introduce bacteria and create a problem where one might not have developed.  I've done the best I can, all I can do now is to keep treating her and hope that all the pieces of stem came out intact and did not leave anything behind.  Looking at the above picture, that seems a slim hope.

Tessa was sound on it this morning, but slightly lame this afternoon, which I would expect one way or another.  Time will tell at this point.

I've always known that horses are prone to inadvertent suicide, but a flippn' Golden Rod stem?!!!  Seriously, a FLOWER STEM???  That is just too dammed much.

Posted by The Dancing Donkey at 11:28 PM