Qilin's tail is two colors...will it stay that way?  What will it look like later?

If you look closely, you can see that Tessa's tail is also two colored (that isn't dirt, it really is two colors:), but she has less brown and the white hair is super thick. 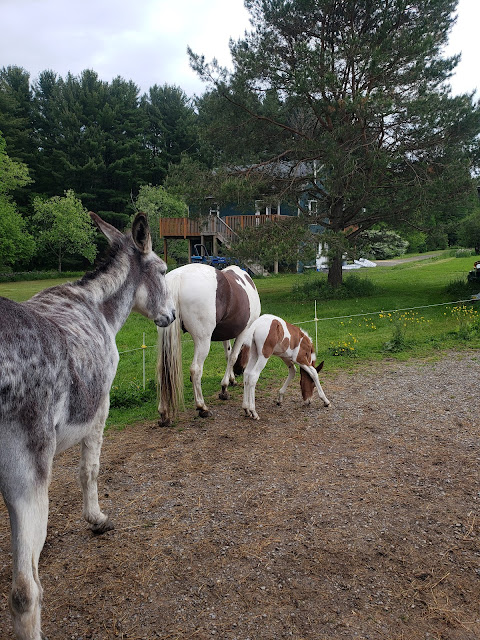 Qilin's tail will stay bicolor and I think the brown will be a bit more noticeable as it goes higher up the tailbone.  He will probably have a bit less tail hair than Tess so the brown will likely show up more. We'll have to wait and see for sure though:)

I will be interested to see if he actually grows a mane.  Most mules don't, but Tess has an overabundance of long, thick locks, so he might.  Time will tell.

Are they all together now?

I would like to say yes, but there are some issues there.  Can you tell one of the BIG problems?.... 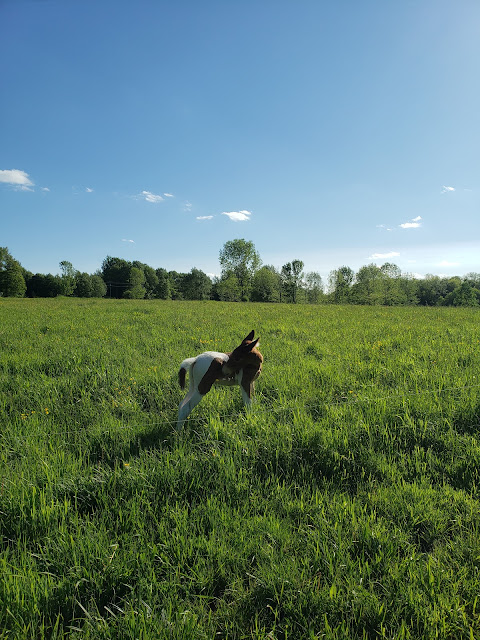 All. That. GRASS.  If I turn the donkeys out on that grass, even with grazing muzzles, I won't be able to roll them back to the barn after they explode into blimps.  That grass is the perfect food for a lactating mare and a growing baby, but a death sentence to bunch of already fat donkeys.

Second issue is that Albert would like to chase the baby and Ramsey would like play with him, which also means chashing, which gets Tess all worried.  Ben is gentle, but intensely curious.  Emma really, REALLY wants to see the baby and would be the best companion at this point, but she especially does not need more grass.  She is also the epicenter of the donkey herd.  She and Ramsey have never been apart and Albert is deeply in love with Emma and pitches a fit if I take her away.

Tessa does NOT want anyone messing with her kid.  She is very happy to have the donkeys around and like to stay close to them, but she gets worried when Qilin runs around too fast and too far away from her.  As for Qilin, he runs around like...hmmm...well, like a 2 week old mule baby stuffed full of milk, exuberance and ATTITUDE.  You'd never guess right? 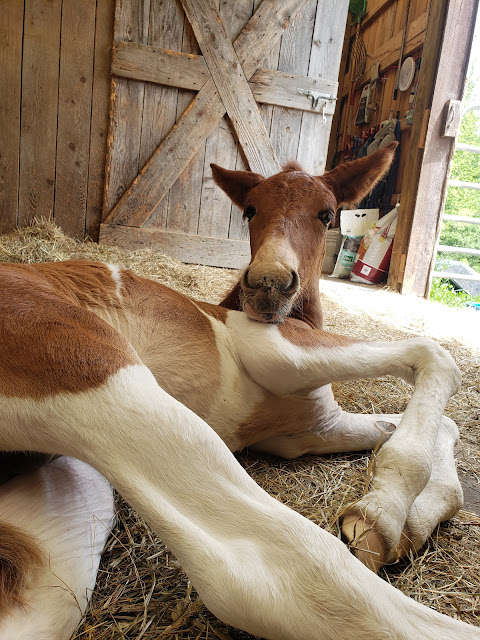 So, for now, in the interest of keeping the peace and the remnant of my sanity, I am letting one donkey at a time come in to get acquainted under supervised conditions. 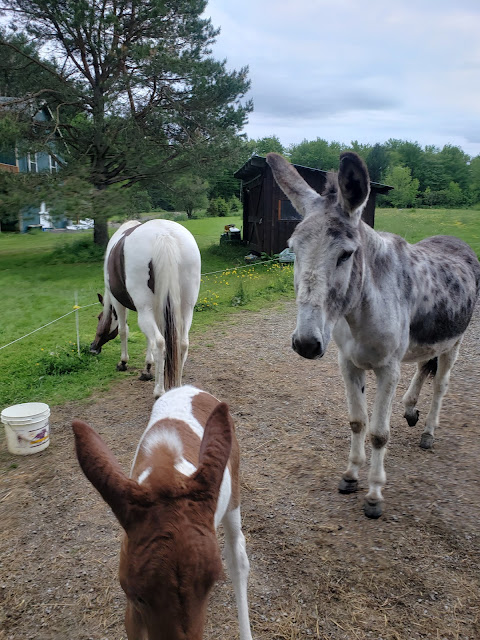 I am making some additional barn alterations so they can all spend more time together while still remaining on their respective sides of the grass-divide.  As Qilin gets a bit bigger and Tess gets more relaxed, I will increase together time.  For now, I am erring on the side of safe and happy. 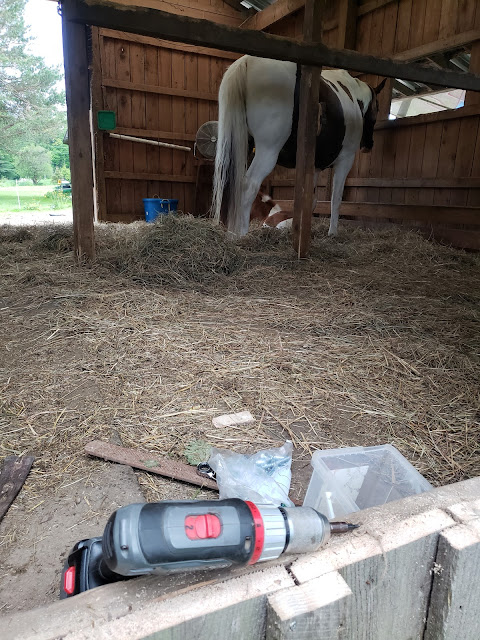 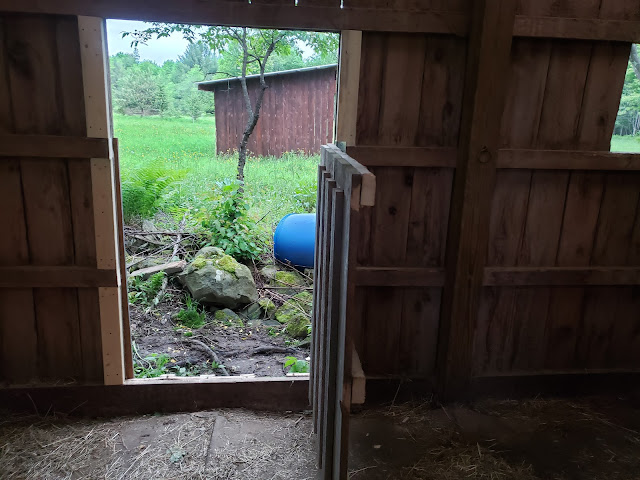 The barn alterations have had the added benefit of desensitizing Qilin to extremely loud construction noise and chaos.  Every time he encounters something possibly scary, he runs to mom and asks her what to do.  Her general response and one of the reasons she is such an exceptional mare.... 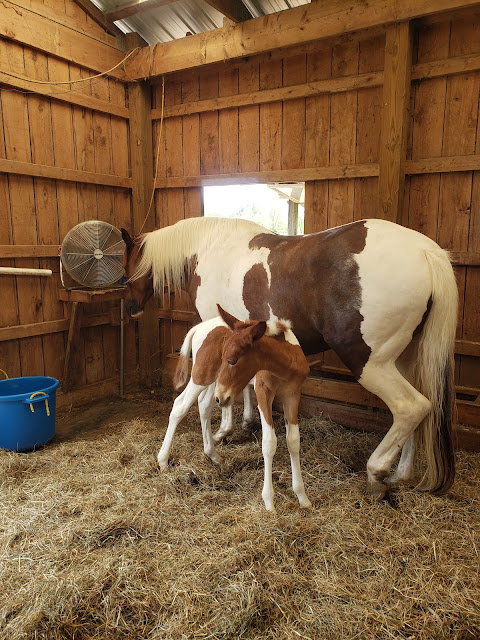 This is what they did while I took a sawzall to two of the walls right behind them. 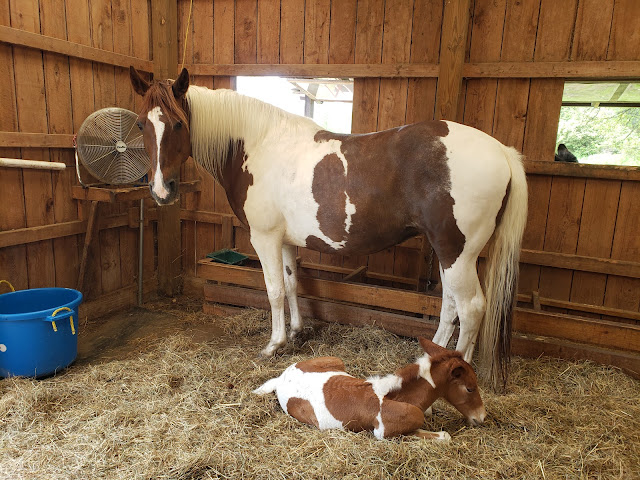 This is also Tessa's response to ATV's, gunshots, weedeaters, lawn mowers, tractor trailers, bicycles, motorcycles, falling trees, balloons, baby turkeys exploding out of the brush and hitting her in the face....etc, etc, etc.  Even annoying paparazzi... 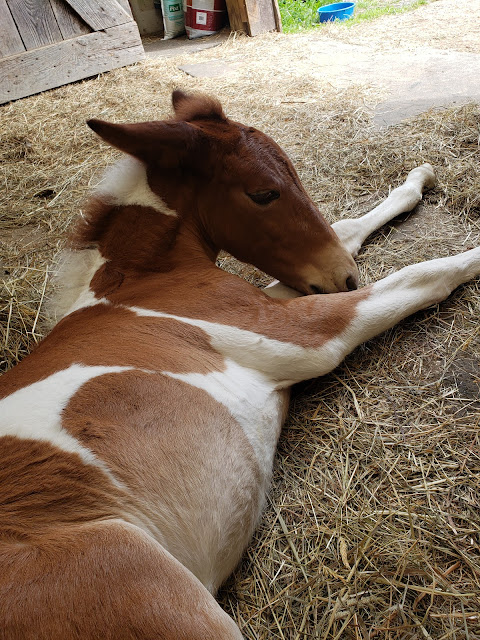 How is Tessa doing?

She is doing great.  She is a fantastic mom and my only concern is the possibility of mastitis because she seems to think she is related to a holstein cow.  She has more milk and a bigger udder than I have ever seen on a mare.  She could easily feed two foals at this point and she often streams extra milk when Qilin has had his fill and she still has more.

The vet suggested that I cut her "grain ration" until her milk production adjusts itself.  That just made me laugh because Tess doesn't (and never has) get any grain.  She gets a custom vitamin mixed with a bit of soaked alfalfa cubes to balance the hay/grass I have and that is it.  I am just keeping an eye on her and, so far, all is well.  If she loses a little weight while lactating, that is all for the good. 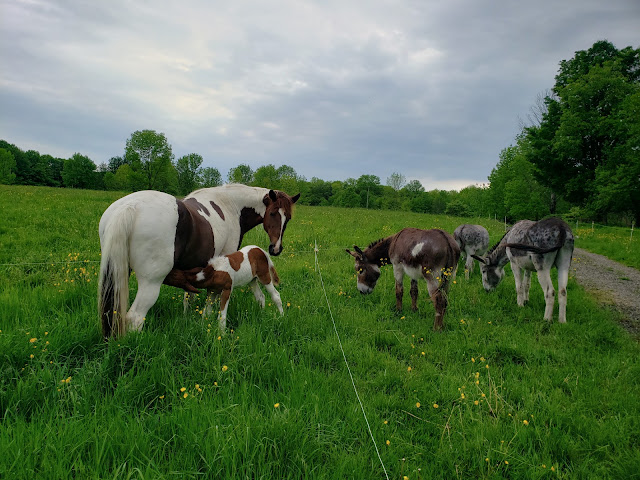 What about the dogs?

Riding Buddy has been visiting several times with her Maremma, Rinatta.  Tess knows Rinatta well and was unfazed.  Qilin was curios, but also unfazed.  The entire Border Collie Brigade spent the day with me a few days ago, which is a whole different type of energy.  They may be a nuclear level of intensity, but they are all very good around livestock of any kind.  They were respectful and well behaved, but spent the whole day hanging out near the barn with me, busily doing what Border Collies do.  Qilin is now dog proofed as well construction savvy. 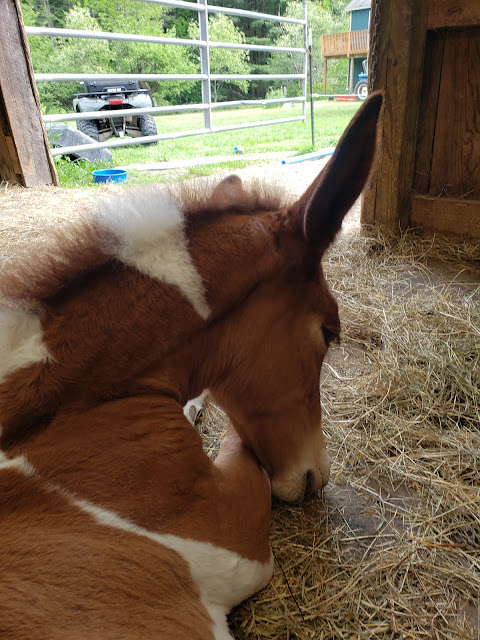 I was expecting a nice baby out of this pairing, but I have to say, Qilin is even more than I was hoping for.  I do love raising babies - of the equine or canine persuasion anyway.  Those human spuds....no clue and happy to remain so:)

Sane, sound, beautiful mule/donkey/horse/dog babies who grow up happy in themselves and a joy to those around them....those are the best.  Qilin and I are off to a good start. 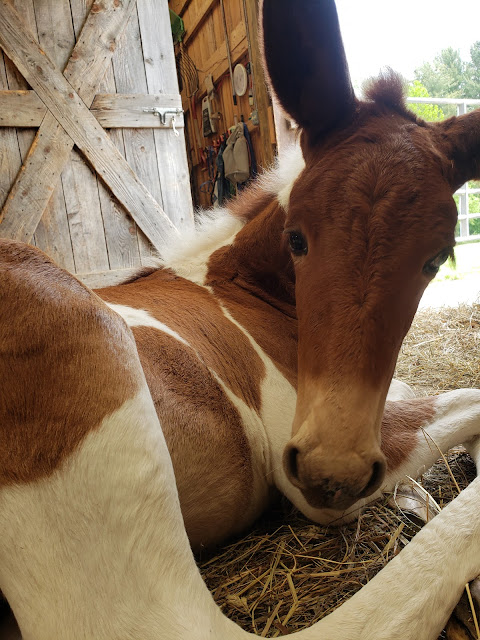 Posted by The Dancing Donkey at 2:07 AM