Tessa is doing very well down at Riding Buddy's place.  She is in loooove with Hawkeye and is enjoying being a horse for a while.  It did go to her head for a bit (doesn't it always?) and she started to behave like a foolish, lovesick twit (or like a herd-bound horse instead of a sensible donkey).  I went down and had a talk with her and showed RB some ground-work exercises to do with her and it did not take long for Tess to remember that she is far to mature and sensible for such nonsense.  She is now having fun going for walks with RB and she is basking in all the extra attention she has been getting.

Not having her around has certainly been an adjustment for me.  Oddly enough, I don't miss her around the barn too much since the donkeys take up such a vast space in the universe, but it is a jolt when I drive by RB's on my way to work and see Tessa out in her field.  Even when I am expecting it, seeing my horse out in the wrong field never ceases to give me a twinge of panic and make me feel like I need to rush home and check my fences.  I guess there are some things that are just hardwired into the deepest, darkest crevices of a horsewoman's heart.

The donkeys were more curious about Tessa's departure than upset by it.  They were also a bit jealous of her adventure.  Emma and Ramsey remain inseparable and there was no real change in their behavior.  Ben, on the other hand, spent a few days cautiously watching for her return and then seemed to take a deep breath and relax.  He was quite nervous around Tessa when he first got here and it took him several months to feel comfortable living with her.  He did finally get relaxed with her, but he is noticeably happier to be biggest equine around.  He has taken to hanging out in all of Tessa's favorite spots

Since her departure, I have even caught Ben playing with a toy several times, which he never did before.  He hangs out with Emma and Ramsey and the three of them are becoming a very tight little group.  Ben used to be a little bit shy and aloof - not anymore.  He has become almost as much a velcro donkey as Ramsey.  If I walk in the pasture now, I have Ben on my right, Ramsey on my left and Emma just behind, nudging my elbow.

Oddly enough, I think the donkeys spend more time outside the barn and are getting a bit more exercise.  They used to spend a lot of time in the barn and Tessa would would stand about 30 feet outside of it.  I always thought that Tessa wanted to be out more, but would not go out without her friends.  Now I wonder if Tessa wanted them to stay in.  She has always been very maternal toward and protective of the donkeys, especially toward Emma. I wonder now if she wanted them in the barn where she could watch over them.

Mind you, the donkeys are still total barn babies and it is a very, very rare raindrop that ever falls on one of them, but they are out and about more.

I always find it fascinating to see the way herd dynamics change and adapt to every new situation.  I have been observing and studying animals all my life, and yet they never cease to stop surprising me.

All-in-all, this massive shift has been a big adjustment for everyone, but it is working out.  The increased riding time has not happened yet, but it is always hard this time of year anyway with the short days and bad weather.  Now that hunting season is in full swing, we can't be out in the woods regardless, so, for now, it is a moot point anyway.  Tessa is happy pretending to be a horse and the donkeys are happy being donkeys so all is right in their worlds. 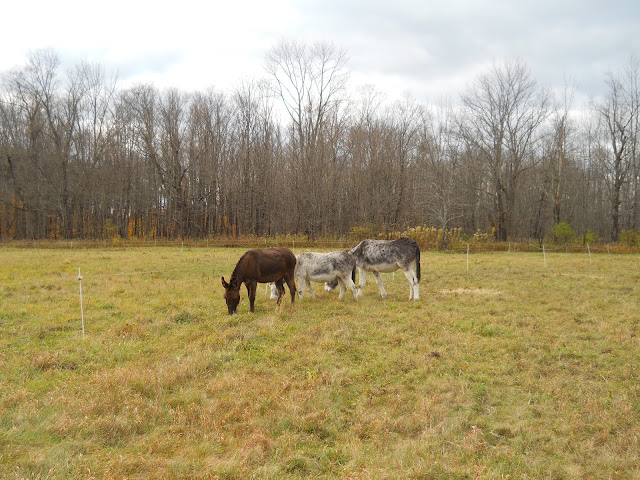 Posted by The Dancing Donkey at 11:43 PM