When last you saw the monster door, I had managed to wrestle it into this rather precarious position. 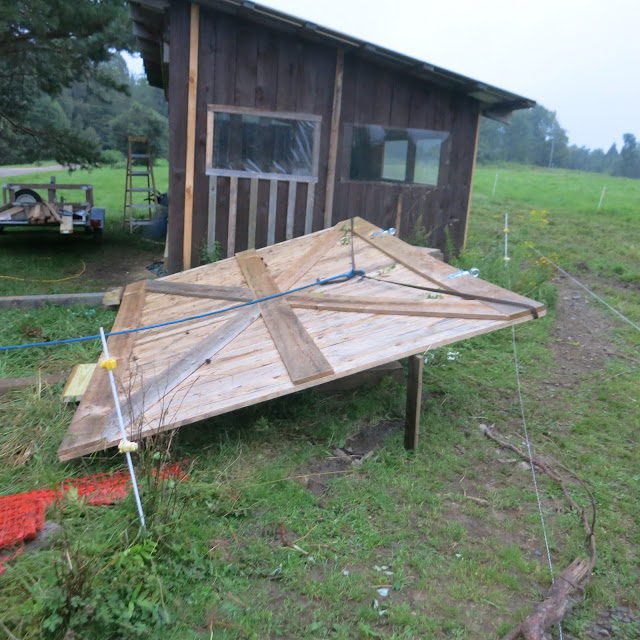 This afternoon, Farm Buddy came over to help with further wrestling.  We estimate that this door weighs approximately 4 billion pounds, but the two of us managed to get it into an upright position. 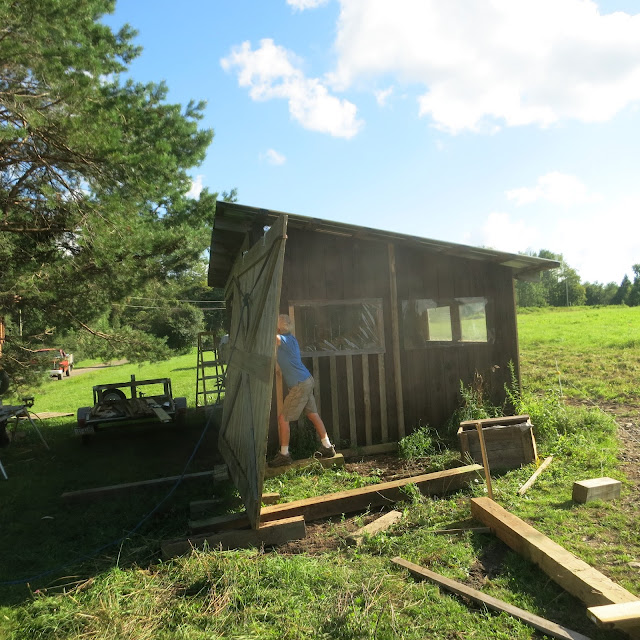 From here, the plan was to slide the door over into place.  However, no amount of grunting, heaving or swearing proved up to the job and the door, which had somehow gained several million more pounds, was not going to budge.

Farm Buddy started making noises about needing more help, LOTS more help, and I could tell she was dubious.  Mind you, this is the woman who has gotten me into more crazy schemes over the past 20+ years than you can possibly imagine.  I can't tell you how many times I have accused her of having a severely deficient sense of self preservation and an over abundance of chipper optimism.  For once, I was the one thinking we'd gotten the hardest part over with and she was the one giving me the hairy eyeball.

But, I agreed that we did need more help so I turned to the Little Green Man for some assistance... 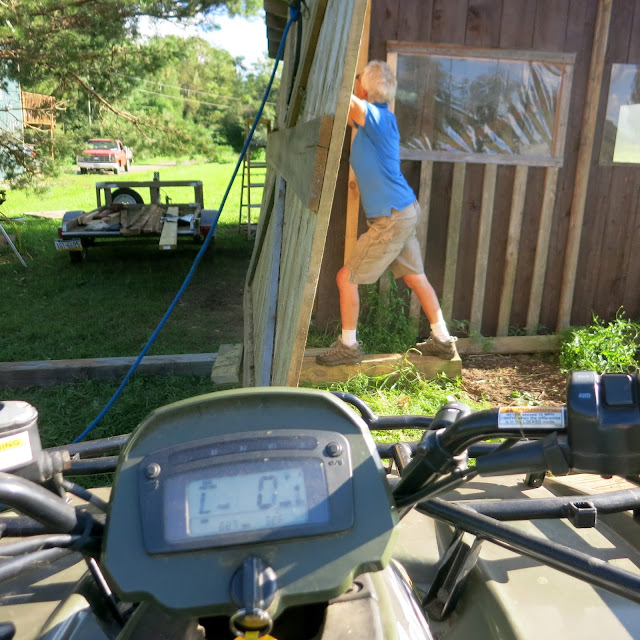 I used the LGM to shove the door closer to its goal.  For me, the worst moment of this crazy endeavor was when FB decided that we needed to get the ropes out of the way and she climbed up on the hood of the ATV to reach them.  Just below her at that moment, the entire weight of the door was resting very precariously on thin wedge of lumber, which she tried to use as a stepping stone to climb on.  That sure brought on visions of squished doom dancing in my head.

See what I mean about a self preservation deficiency? 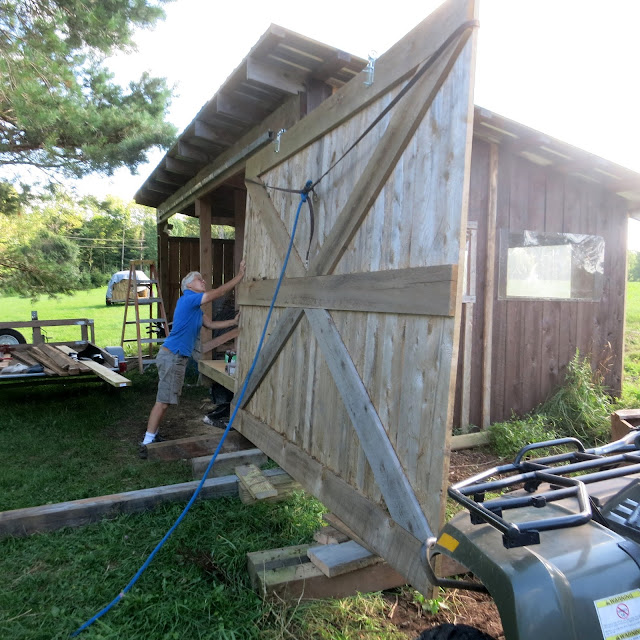 The Handy Man Jack that is, which is that blurry red thing at the bottom of the door... 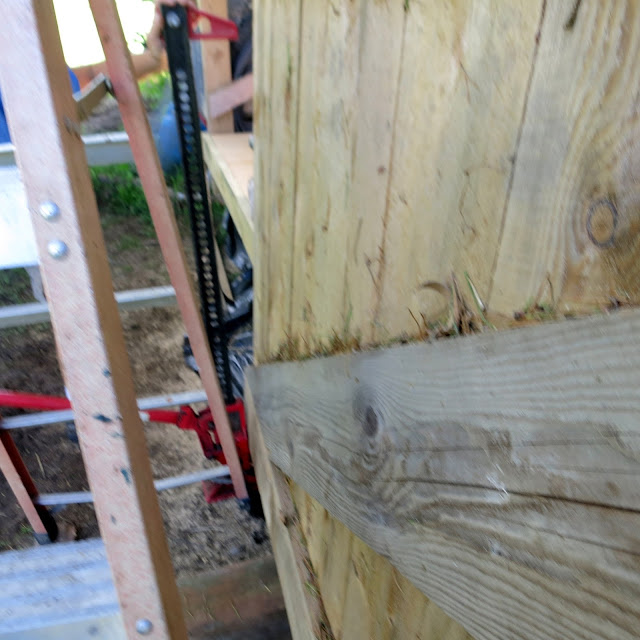 We jacked up the bottom corner of the door, got the first roller lined up, the LGM gave it another small shove and the first set of roller wheels slid into the track.  From there, it was all smooth, easy sailing and the monster door is finally in place. 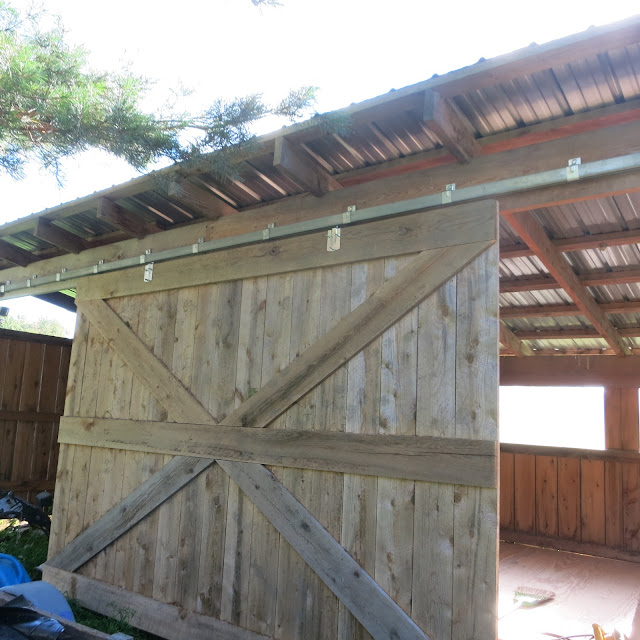 The very first thing I did was bolt a solid block at either end of the track so that the door can never be pushed off its track by accident.  Of course, I remembered about 2 seconds after the last screw was in that the end of the door had to go past this point and I had to take the block back off and turn it sideways.  Thank God for cordless drills and star-drive screws. 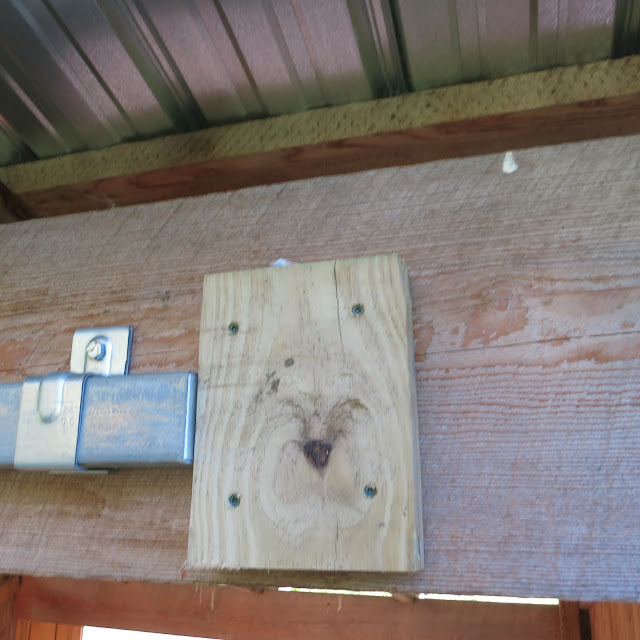 That block was a priority though, because I never want to have to wrestle this beast again.  I estimate that the real weight of this thing is around 400 pounds.  It will get a bit lighter as the lumber dries out, but it is an 8x12 foot door/sliding wall and it will always be a monster.

But that's one more monster Farm Buddy and I have successfully slayed.  All we needed was a little help from a few good men:) 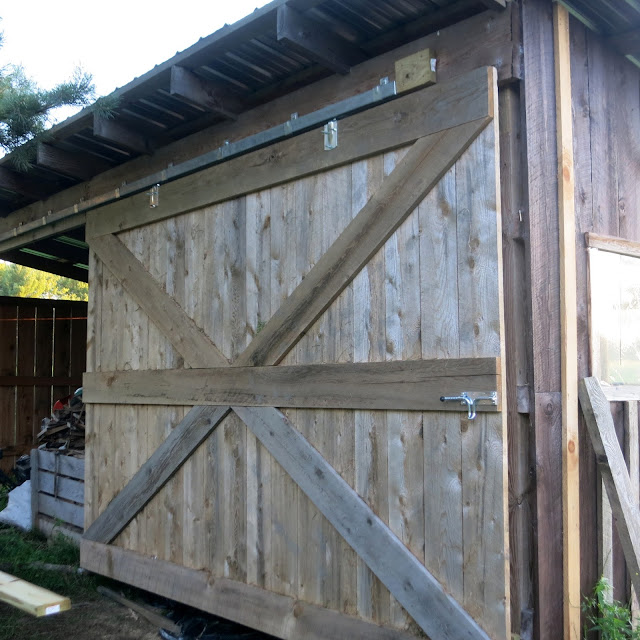 Posted by The Dancing Donkey at 12:49 AM