Rumors of Their Demise....

Have been greatly exaggerated.

There is a rumor circulating around town that all of FB's sheep have perished from some sort of awful disease.  Several times this week, someone has offered FB condolences on this tragedy, which is rather baffling and awkward since the sheep are all perfectly healthy and happy.

We are not sure where this odd rumor originated, but it is part of living in a very small town.  Gossip and rumors abound.  The creativity of some of them is really quite amazing.

Before I built my farm, I owned a house right in the village.  It was a very old house that had been in the same family since it had been built in the mid 1800's.  They had always been a fixture in the community and an endless source of rumor and speculation as they were thought to be quite wealthy and a bit reclusive.  I came along, all unknowing, and bought the house when the very last of the family passed away.  From what I could tell, she had been a very elderly, never married spinster who had been the subject of intense spculation all her life.  Any unmarried female, living alone around here is the subject of intense speculation.

When I decided to sell the place a few years later in order to build this house, I was rather astounded at the number of "buyers" who showed up just to get a peak at the place.  Most of them went away feeling a bit disappointed that:
There were bats though.  Ho boy, were there bats!

And for the record, I still don't know anything about a murder that may or may not have taken place in the house or possibly the barn or maybe the house next door or was it the moon?

Selling that house was an interesting experience.  I Hesitate to even think about the crazy stories that must be circulating about my time there.

Just so everyone knows, I haven't got any money hidden under the floors either.

But back to the sheep, because we aren't quite done there....

Farm Buddy's sheep are not only alive and well, they are home bodies as well.  They are NOT roaming the countryside or getting in the road.  This is somewhat less baffling as there is indeed a rather large flock of sheep wandering around and getting into trouble just down the road.  They belong to a neighboring farm.  FB's sheep are all present, accounted for and are happily hanging out in the barn, munching on second-cutting hay.  Wandering the countryside or dying of mysterious ailments would be waaaay too much work for a this bunch of fat, spoiled critters. 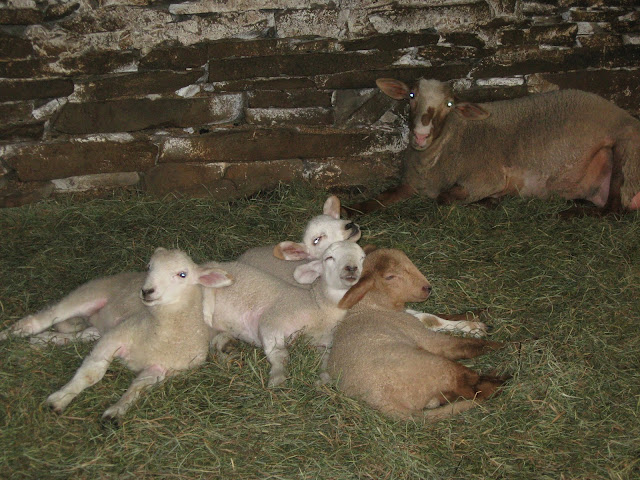 Posted by The Dancing Donkey at 10:54 PM