Irmgard asked if I'm not just the littlest bit tempted to keep one of the maremma puppies...


Of course I am.  These are very nice, sweet, fluffy, cuddly marshmallow puppies that are nearly irresistible.  I don't know how anyone could possibly keep their hands off them.  There was one puppy in particular who tried very hard to pick me as his human.  He was the one who always ran up to me first, who liked me best and wanted to follow me home.  He was also the biggest, toughest, most dominant guard dog in the whole big pack of guard dogs.  At four weeks old, he liked to climb up onto the hay bales and bark and growl down at all his smaller siblings.  He is going to be one BIG bruiser of a dog.  He is also very sweet, smart, charming and oh-so-huggable.  A big, squishy, fluffy, highly opinionated teddy bear - with attitude.  He is also going to weigh around 180 pounds when he grows up.

As a joke, I started calling him Brutus the Bruiser.  We laughed at him and teased him with it and all agreed that we couldn't saddle the poor fellow with that for his whole life.  And then it started to stick anyway. 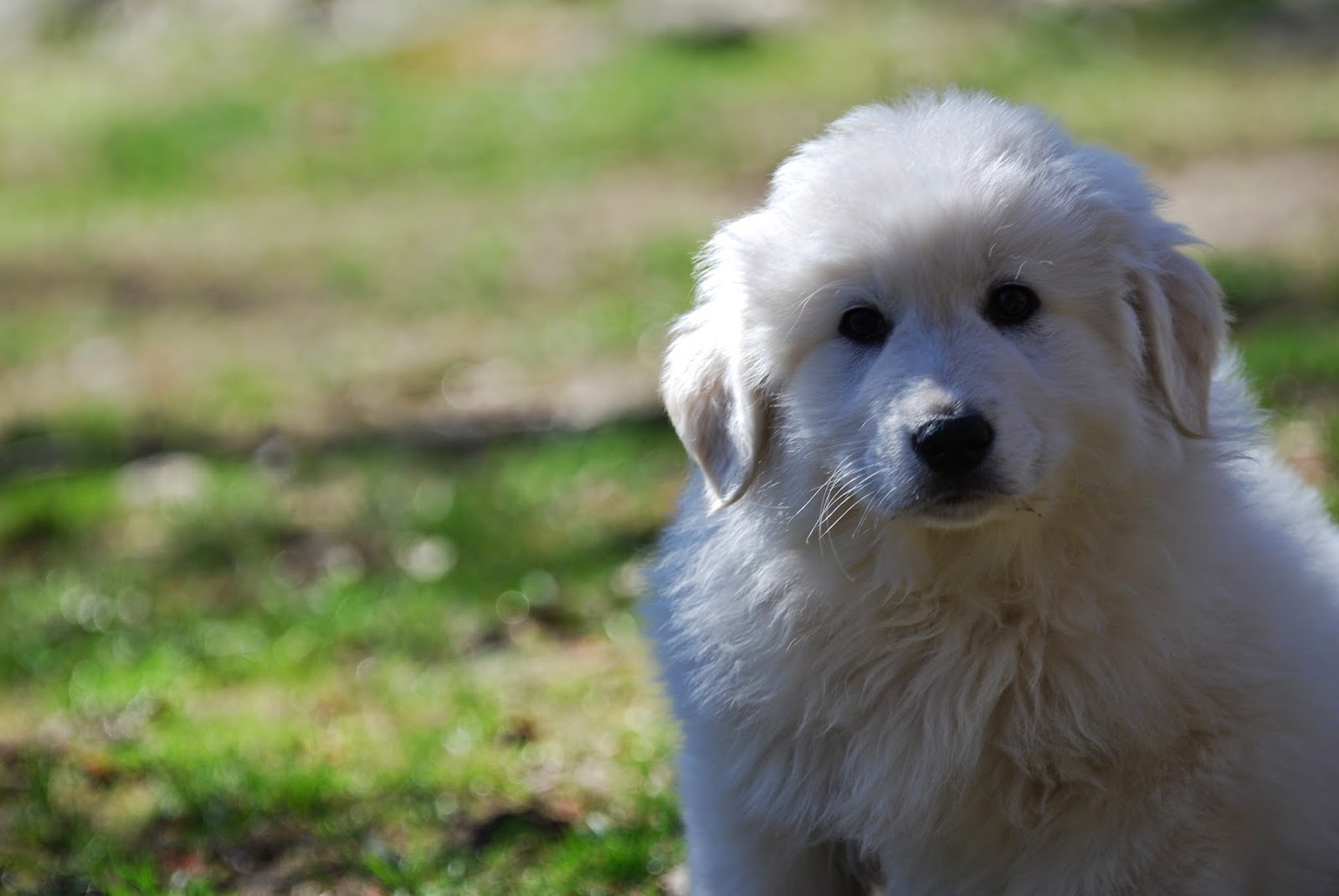 Did I think about it?  Oh yeah, most definitely.  I thought about it quite a lot actually and that is why I am not going to be bringing Brutus or any of the other puppies home.  If I could, by some miracle, find a work-from-home job, I'd do it.  But, I don't see that happening any time soon and a huge, fluffy, aggressive guard dog is not going to fit into my world right now.

The remaining puppies (there are five left yet) have gone back to their owner, many of them have gone on to new homes.  Brutus was one of the first to go.  He went to a really great home with a very nice family who have experience with Maremmas.  They also have 100 acres, a job for him to do and a great deal of love.  He will do well there.

The other, bigger reason not to bring a Maremma pup home is Connor.

Connor has not been the easiest puppy to raise, but he is becoming an excellent dog.  He is ultra high energy, easily distracted and fiercely intelligent.  He is one of the most complex dogs I have ever known, but that is very easy to miss in his boundless energy and enthusiasm.  It took me a long time to figure out what motivates him and how to use it once I had.  He likes food, but would leave a steak dinner to play with a dish towel.  He figured out clicker training within minutes and was bored with it nearly as fast - he will walk off and find a way to amuse himself rather than play clicker games.

Connor's real motivation is engagement and play.  He desperately wants to be part of everything and he will work very hard to find a way to insert himself into any task.  I am just now figuring out how to work with that.  I also have to watch out for him and make sure he takes occasional breaks because there is just no quit in this dog. He responds best to subtle, nonverbal cues that allow him to work through a problem on his own and find a solution.  If he gets it right, I praise him lavishly and spend several minutes playing with him.  Anything he learns this way, he gets 100% without fail and he willingly builds off of these skills.  Anything I try to make him learn with more traditional methods or clicker training, is a battle I never reliably win.  He is always trying to find the loopholes just for the sake of figuring them out.

When he is home with me, Connor has become just about the best farm dog you could ever hope for.  He is quiet and respectful around the donkeys, he responds to commands instantly and is unfailingly cheerful and eager to go.  He is always with me, but not in the way.  He never wanders and he has a clear understanding of boundaries.  He sees everything, takes it in and learns from it.  It sometimes takes me a while to figure out exactly what he is learning, but eventually, he ends up teaching me about it.  It's almost always a surprise when I figure it out.

When Connor is around other dogs, all of that disappears in a wild flurry of play and pack dynamics.  Right now, I think Connor has the best of both worlds.  He has time and space to grow, study, learn and develop when he is home with me.  When he goes to Farm Buddy's (nearly every day) he gets to be one of the pack.  I think the combination is very good for him and he would not have that if I brought in another puppy.

Connor has grown so fast and looks so grown up that it is easy to forget that he is still just a puppy himself.   He will be 8 months old at the end of this week, which is a hard age for a dog.  It's puberty, adolescence and early adulthood all in one.  I may get another dog at some point in the future when Connor has matured more.  Right now though, I think my complicated little land shark still needs all the attention I can give him and I am enjoying watching his mind work.  I feel like I am just beginning to figure out what makes him tick and how his very busy brain works.  I don't want to lose that.

Besides, Connor has got enough to deal with playing big brother to both Maggie and Bess.  It's a very tough job.... 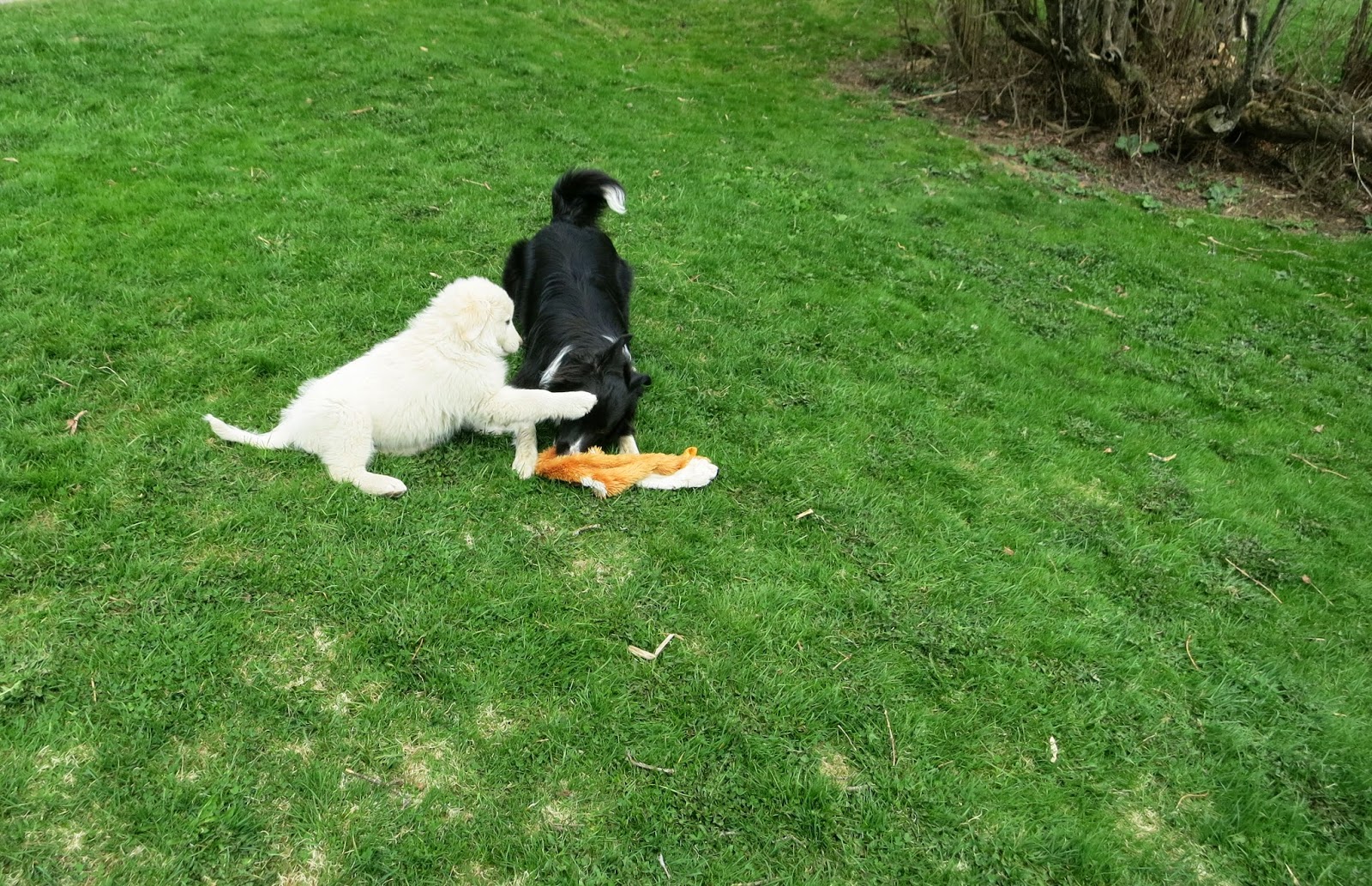 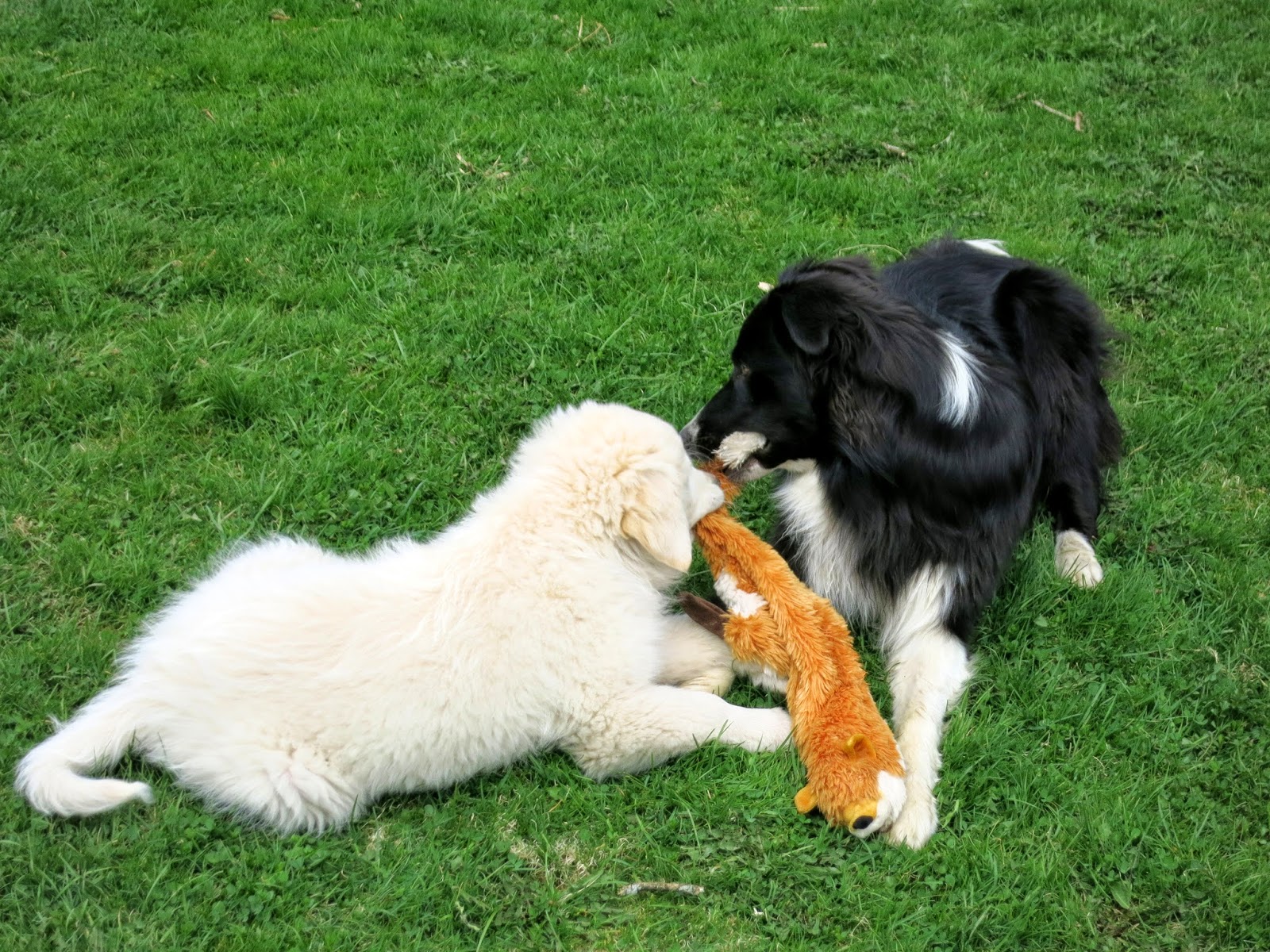 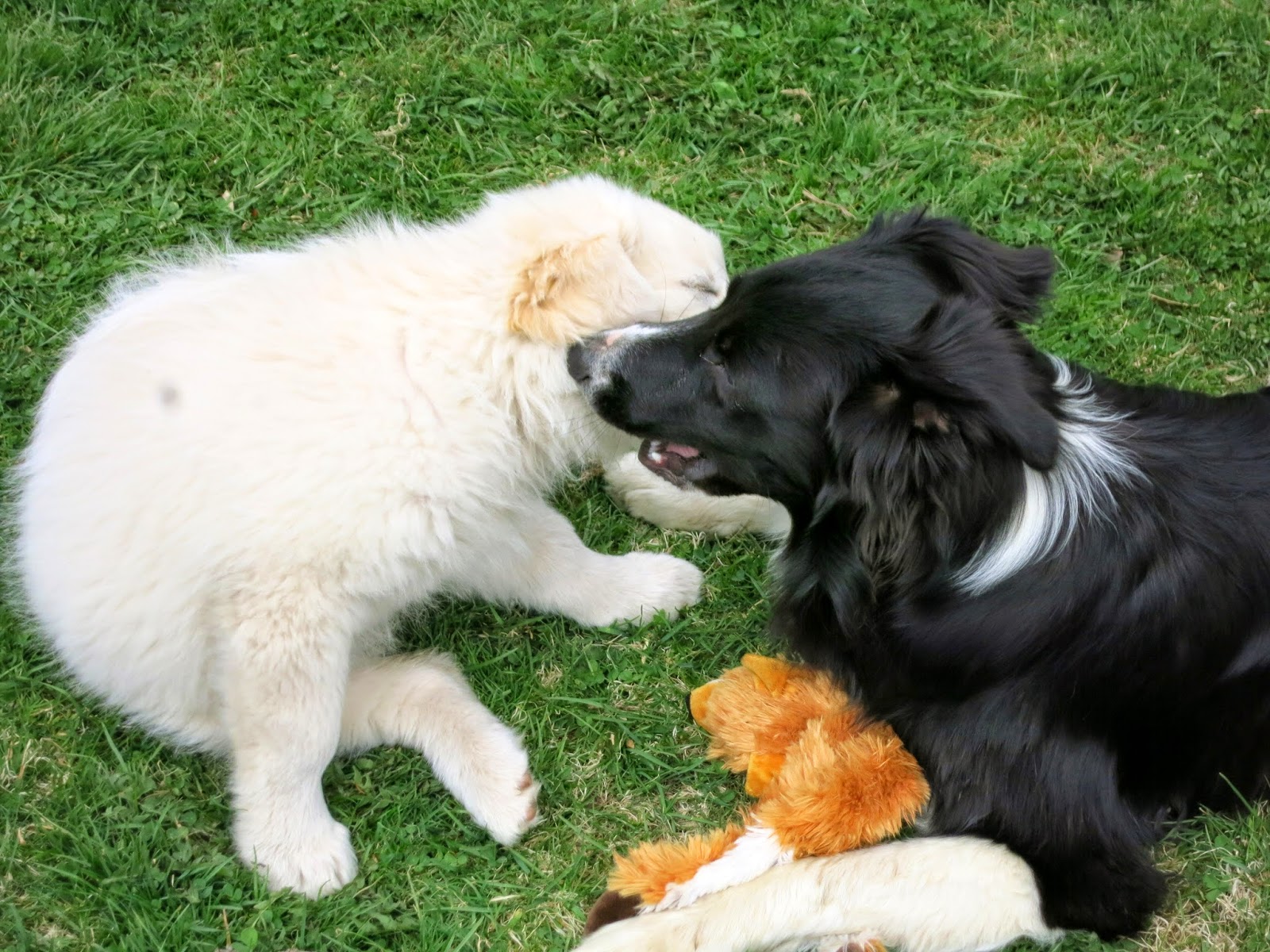 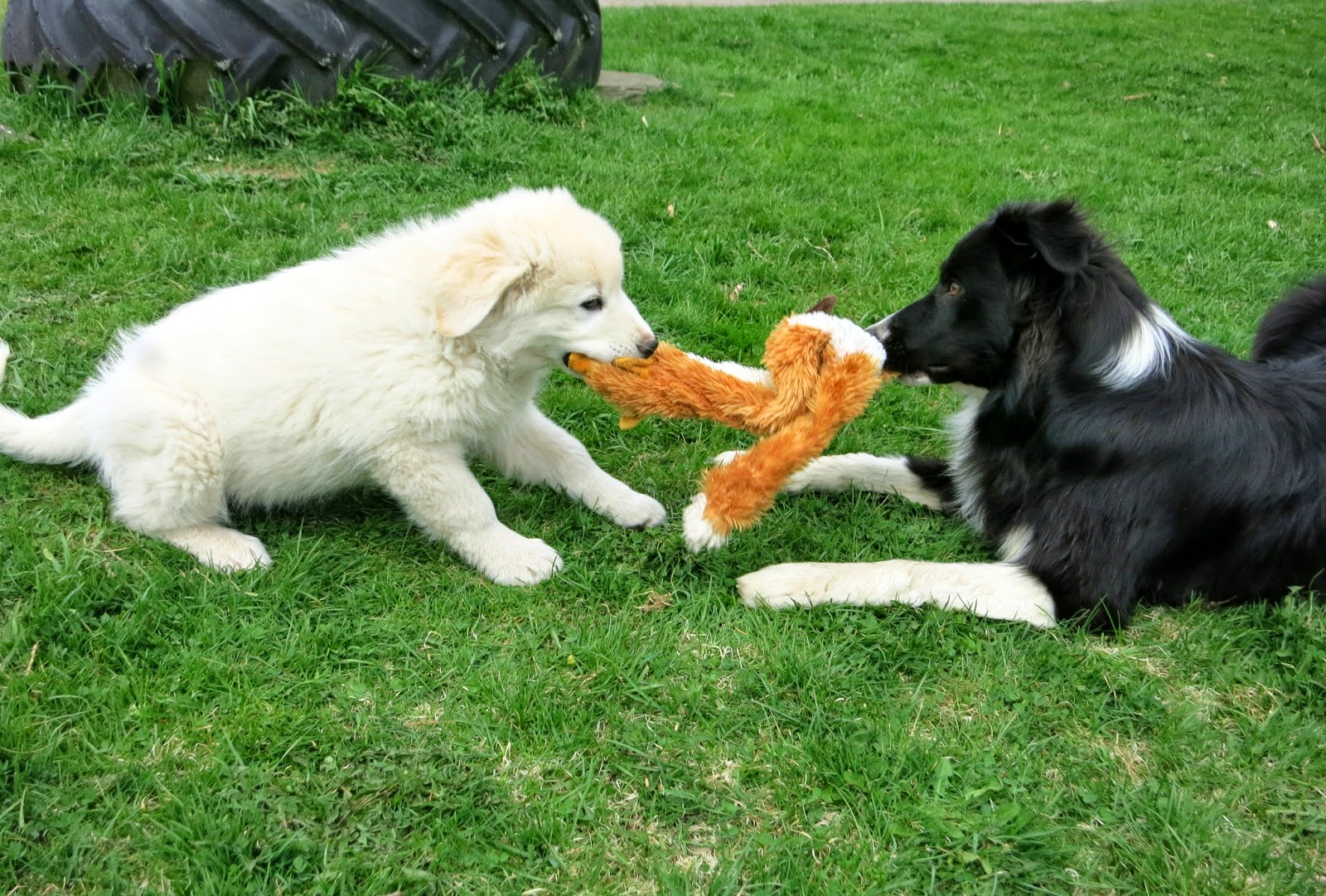 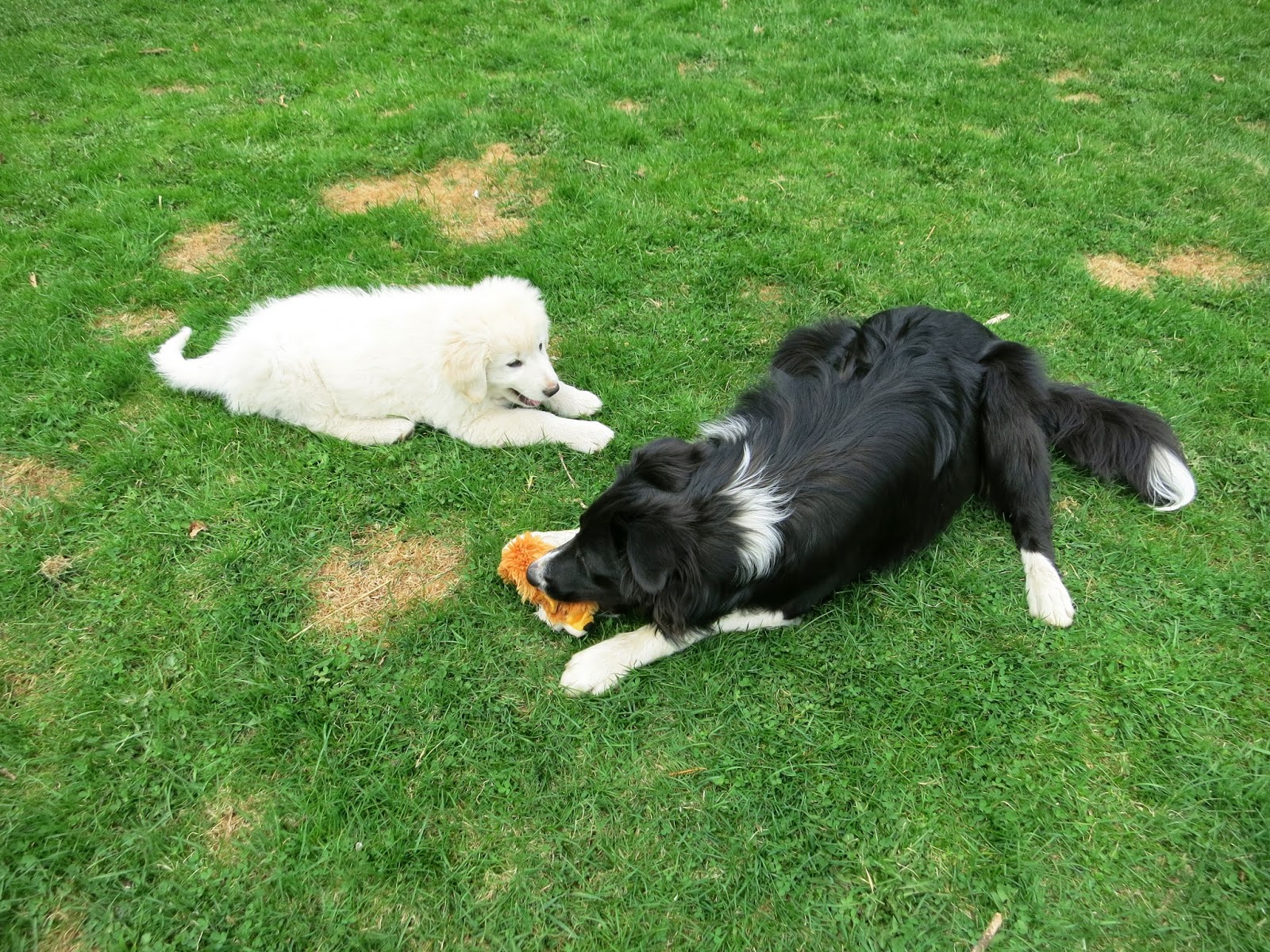 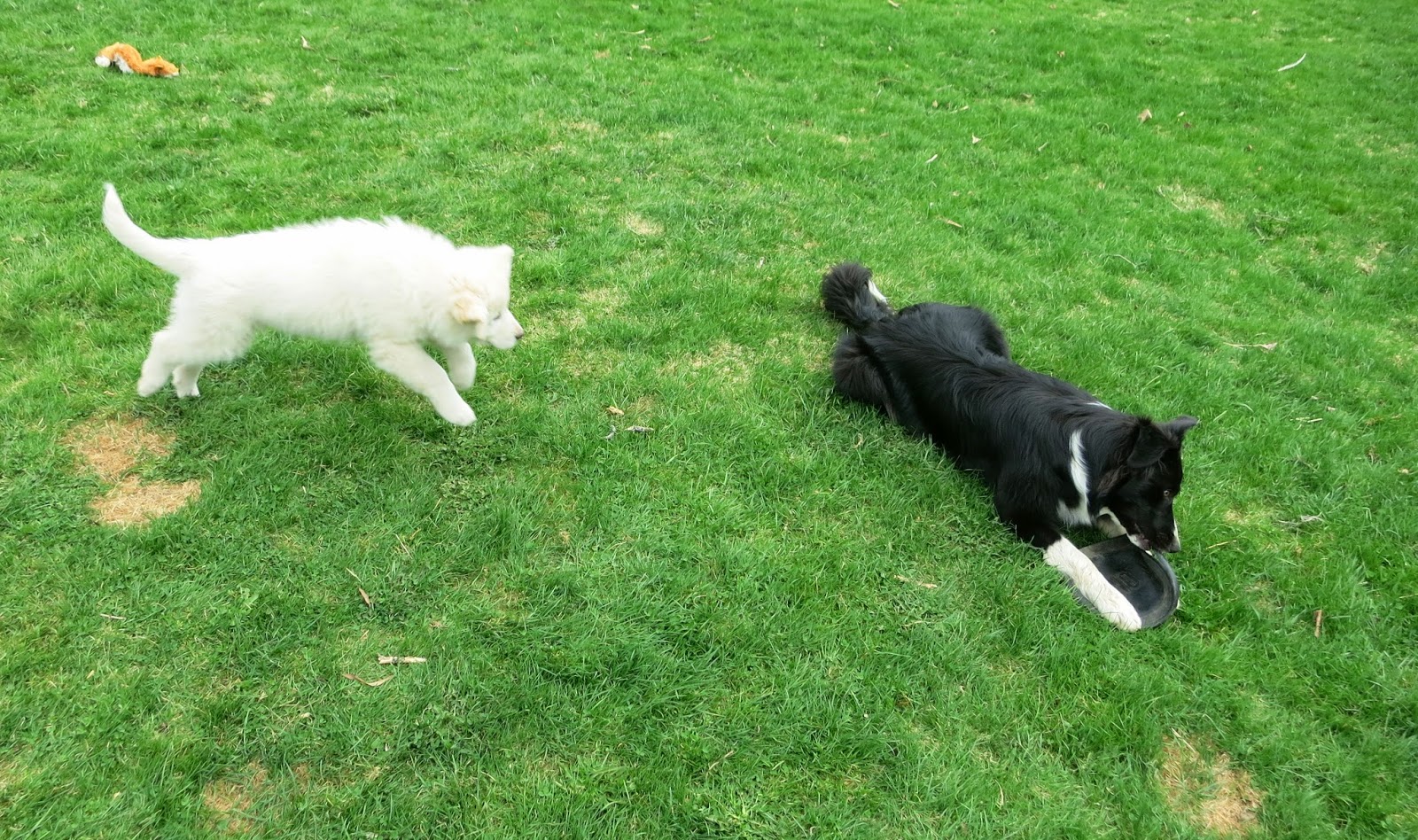 Posted by The Dancing Donkey at 12:24 AM