My vet and I have come up with a treatment plan for my little herd (with a bit of input from the great people at the Donkey Sanctuary - thank you).  The treatment for Lyme is generally 30 days of antibiotics, with doxycycline being the first choice.  There are several issues though, the main one being that doxycycline is in short supply and the price has become astronomical (I actually doubt that the supply is really limited anymore as the problem that caused the shortage happened in 2012 and has been long since resolved.  However, there is a lot of demand for it now due to the massive rise in Lyme disease and the drug companies are milking it for all its worth).  The cost of treating just Tessa would be $1500 for the doxy alone.  The two donkeys add up to about the same so add another $1500 plus vet visits.

Fortunately there are some other options.  My vet has treated a LOT of horses in the area and has had good results using minocycline instead instead of doxy.  It's not the first choice, but it seems to work.  In fact Riding Buddy had to treat Hawkeye last fall, which I have been meaning to write about, there is some really interesting hoof stuff there.....

At any rate, I can treat all three with minocycline for about $500 vs. the $3000 doxy would cost.  We weren't sure this was safe for donkeys as my vet has never used it in them before and I am not familiar with this drug.  However, the Donkey Sanctuary says it should be OK and I definitely trust them so we're going to try it.  If the price difference weren't so huge, I'd opt for the doxy, but a $2500 price difference.....yeesh!

The minocycline arrived this afternoon and everyone got their first dose.  I managed to get all of them to eat it with just a little help from the molasses bottle.  I'm very much hoping that that will continue, the last thing any of them need is sweet feed.

The really big worry is what to do after treatment.  Lyme is a bacterial infection so they can get reinfected as soon as treatment ends.  During the warmer months, I find at least 15-20 ticks per day, especially Spring and Fall.  I spend nearly an hour a day searching for and destroying deer ticks.  It obviously isn't enough and nothing seems to work to keep them off.

Most worrisome is that it is the nymph stage of the tick's life cycle that transmits 90% of the disease and I almost never manage to find those.  The biggest adults are about the size of a sesame seed and the nymphs are the size of a pin head.  The nymph is the second in on the left.... 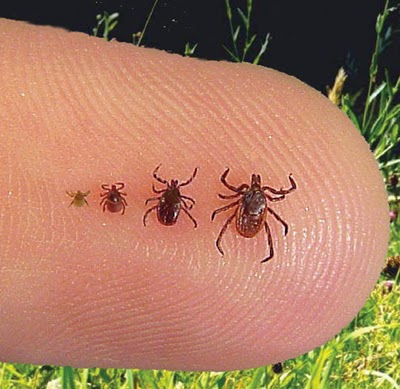 The vet has suggested I try Ultra Boss, which is a highly concentrated Permethrin Insecticide.  She says it does seem to help, but I hate to use so much of that stuff.  I'll probably do it anyway because what else is there?  I am besieged.

Things are a little easier for the dog as there are some products that do work to kill ticks on dogs although, the ticks are rapidly becoming immune to them.  I used to use Frontline Plus on Tanner, but found that the ticks in this area are immune to it now.  I am currently using Vectra on Connor, we'll see how long that works.  He is also vaccinated for Lyme, which is somewhat controversial as there is some question of its effectiveness.  However, Connor's vet saw over 300 cases of lyme last year, with many of them resulting in catastrophic kidney failure (the first thing we did when Tanner got sick was test for Lyme - he was negative).  The dogs who have been vaccinated have not become ill so Connor got the shots.  I'll also continue with the Vectra because there were also over hundred cases of anaplasmosis just at that one clinic.  This is a very small town and only a very small percentage of animals ever get tested so those are very high numbers.

For whatever reason, cats almost never get Lyme disease.  It's possible, but rare as they have a natural resistance.  I'd really like to see some research into what gives them immunity.  Maybe a better vaccine could be made from that?  Hopefully, someone is working on that.

There is no vaccine for horses.  However, many people in this area (and especially in areas like mine where the exposure rate is extremely high) are using the dog vaccine to vaccinate their horses.  I first heard of this several years ago and the risk seemed too high at that time.  Now....I might do it.  It's a questionable thing to do, but a lot of horses have now gotten the shots for several years with no adverse reactions and, so far, none of those horses have gotten Lyme or been reinfected.  I am not aware of any donkeys who have gotten the shots though so that is rather (a lot) scary.  Which is worse, a possible vaccine reaction or almost certain Lyme disease?

Testing for Lyme is very simple now.  There are two options.  The first, easiest, cheapest test is called a SNAP test.  It only requires a few drops of blood or serum and actually tests for Lyme, anaplasmosis, ehrlichiosis and heartworm all in one.  The same test works for both horses and dogs and it only costs about $30.  The other Lyme test was developed at Cornell and is fairly new.  It is more expensive (around $70-80 here) and only tests for Lyme, but it gives a lot more info.  It can tell the difference between an acute or chronic infection and can differentiate between a bacterial infection vs. a vaccination response.  If an animal has been vaccinated for Lyme, you'd have to use the Cornell test.  The treatment is the same regardless of which test you use.

As for me, I have been tested several times over the past few years and, so far, am negative.  I've been bitten several times that I am aware of, however, a tick has to be attached for at least 24 hours and hot water will kill them.  Since life can not go on without a hot shower every morning, I've avoided the plague so far.