A couple of people have asked how Ramsey's foot is doing.  I'm sorry its been so long since the last update.  The never ending battles with snow and cold has sapped all my will to keep up with foot photos.  I took these photos a couple of weeks ago when we had a brief reprieve in the weather.

Ramsey's foot is doing well.  I had a vet out here last Thursday to do dental checks and vaccines.  She had not been involved in any of Ramsey's previous foot care and was interested in his story.  Her opinion was that she was, "amazed at how normal his foot looks".

This first photo was taken mid trim and you can see that the wall connection is about as good as it ever gets.  That crescent shaped cut on the left side of the foot is where that nasty abscess was that he had last Fall.  That is all dead hoof and I cut most of it out.... 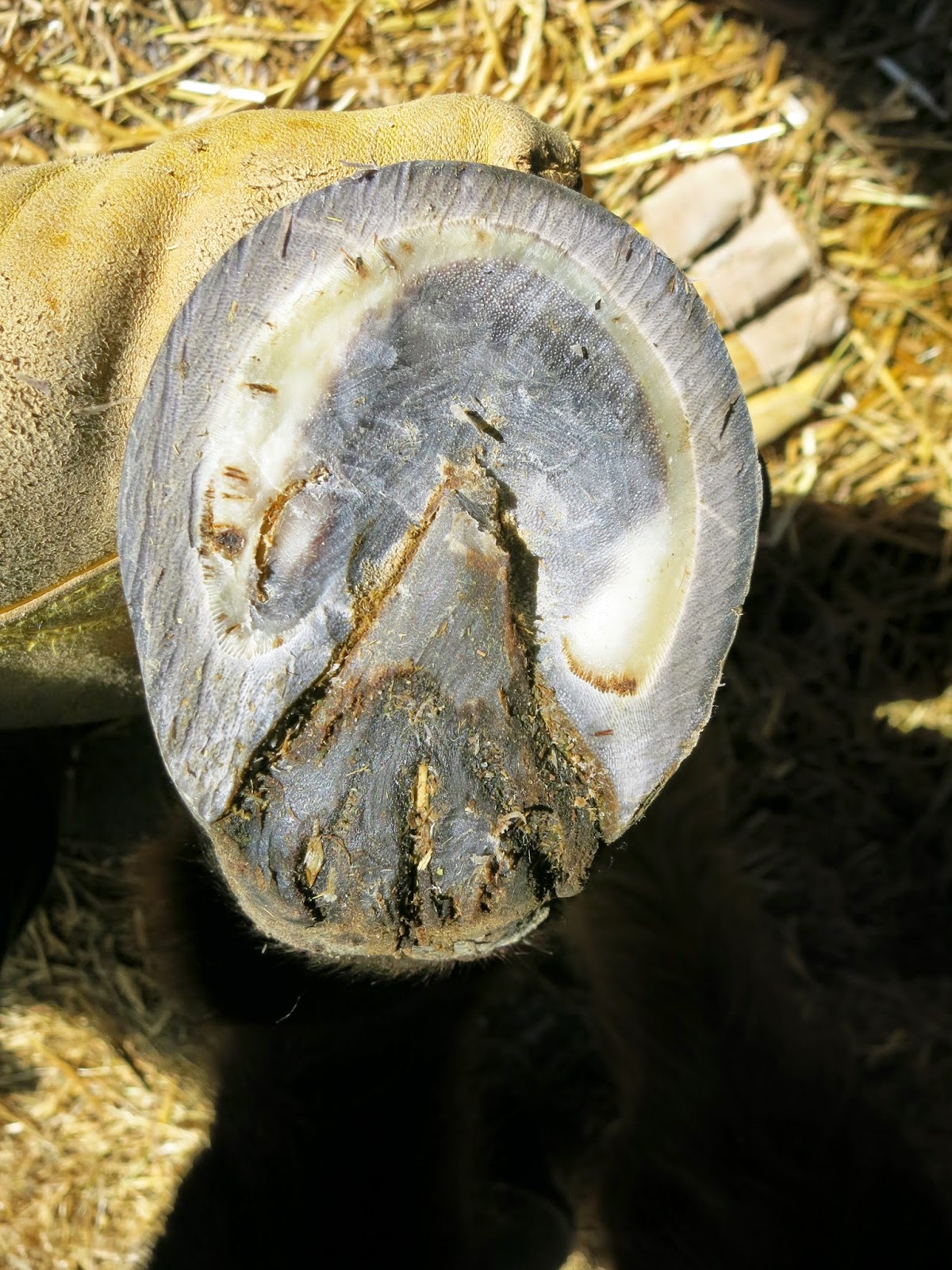 You can see it a little more clearly here after I trimmed further.  From this view, it is all that lumpy, rough area on the right. 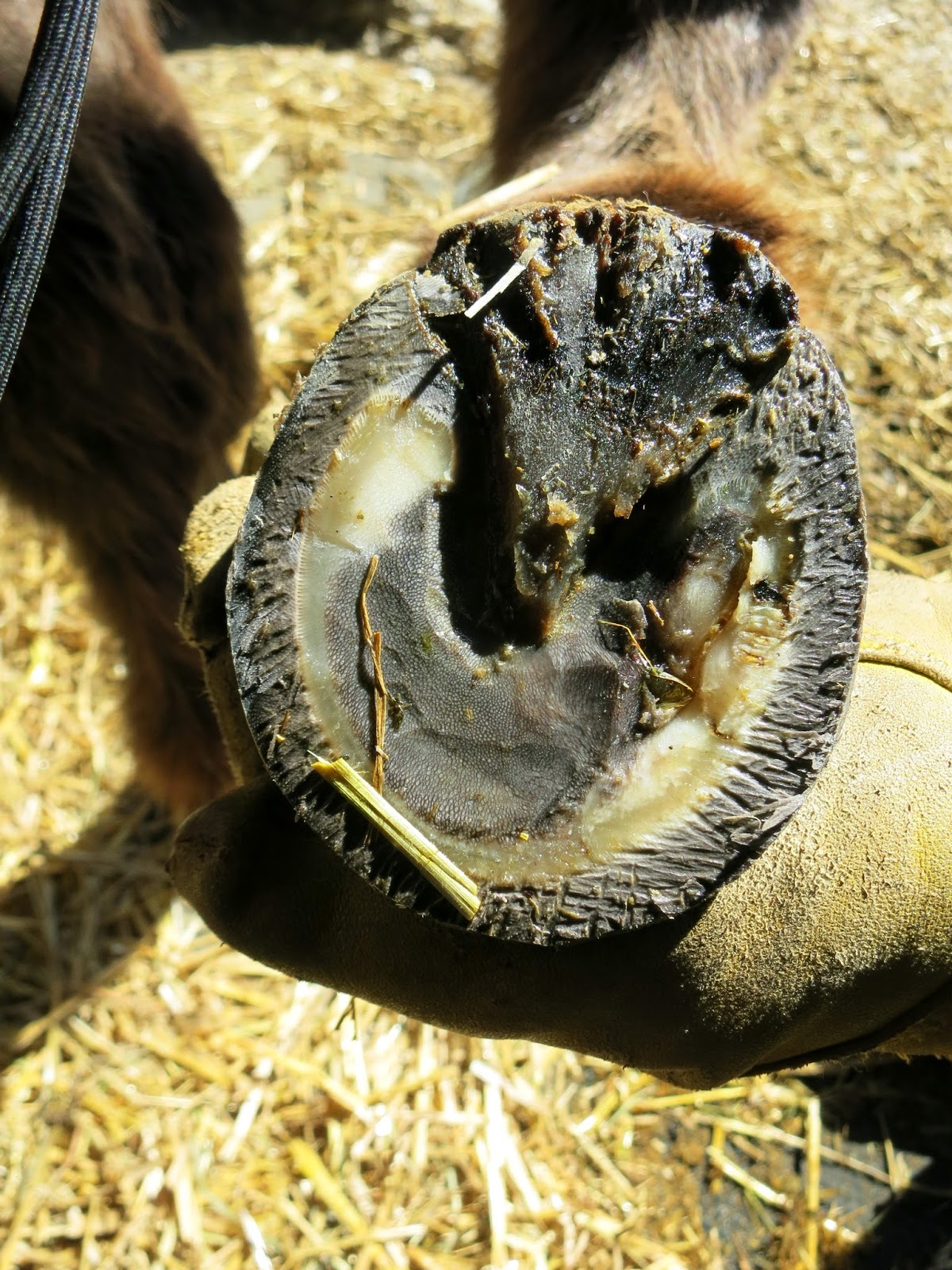 I have finally gotten the knack of keeping the foot well balanced despite all its opposing angles, twist and missing bits.  The large horizontal crack you can see in this next photo is where that abscess broke out at the coronary band. 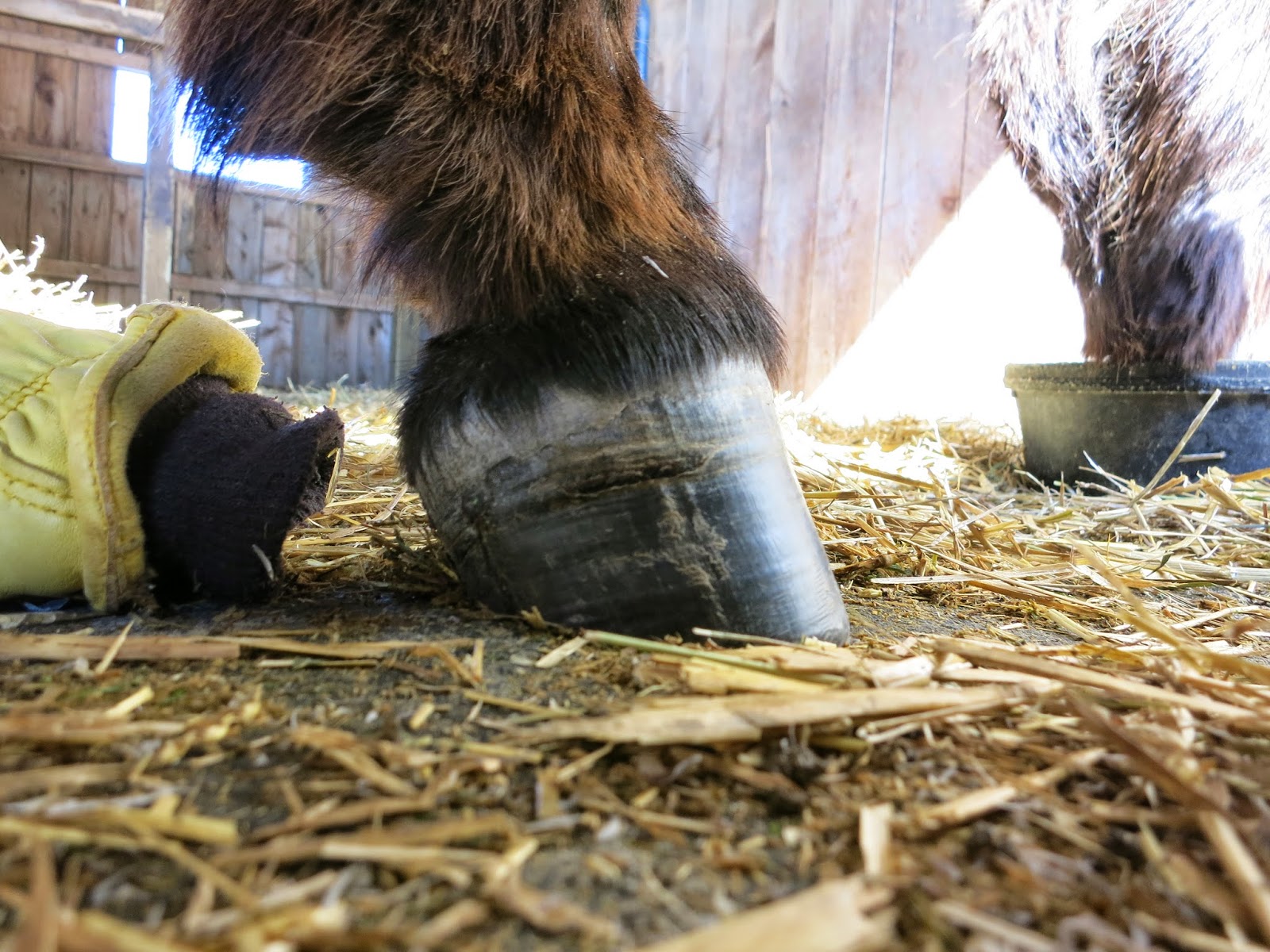 That crack will continue to keep migrating downwards as new growth comes in from above.  In a healthy hoof, this would ordinarily just grow out and break off with no trouble.  Since this is where Ramsey is already missing a large piece of coffin bone and the hoof wall does not grow well on a good day, I will have to keep a very close watch on this when it gets closer to the ground.    I will keep the foot wrapped and may put a cast on the foot to protect and support it when he loses this chunk of hoof wall.  If the snow ever goes away and it gets muddy, I will wrap the foot as a precaution against bacteria invading the compromised area of his hoof.

The one aspect of Ramsey's foot that I am not happy with right now is that I have let it get much too tall.  The balance is great and it is nice and straight, but it's way too tall. 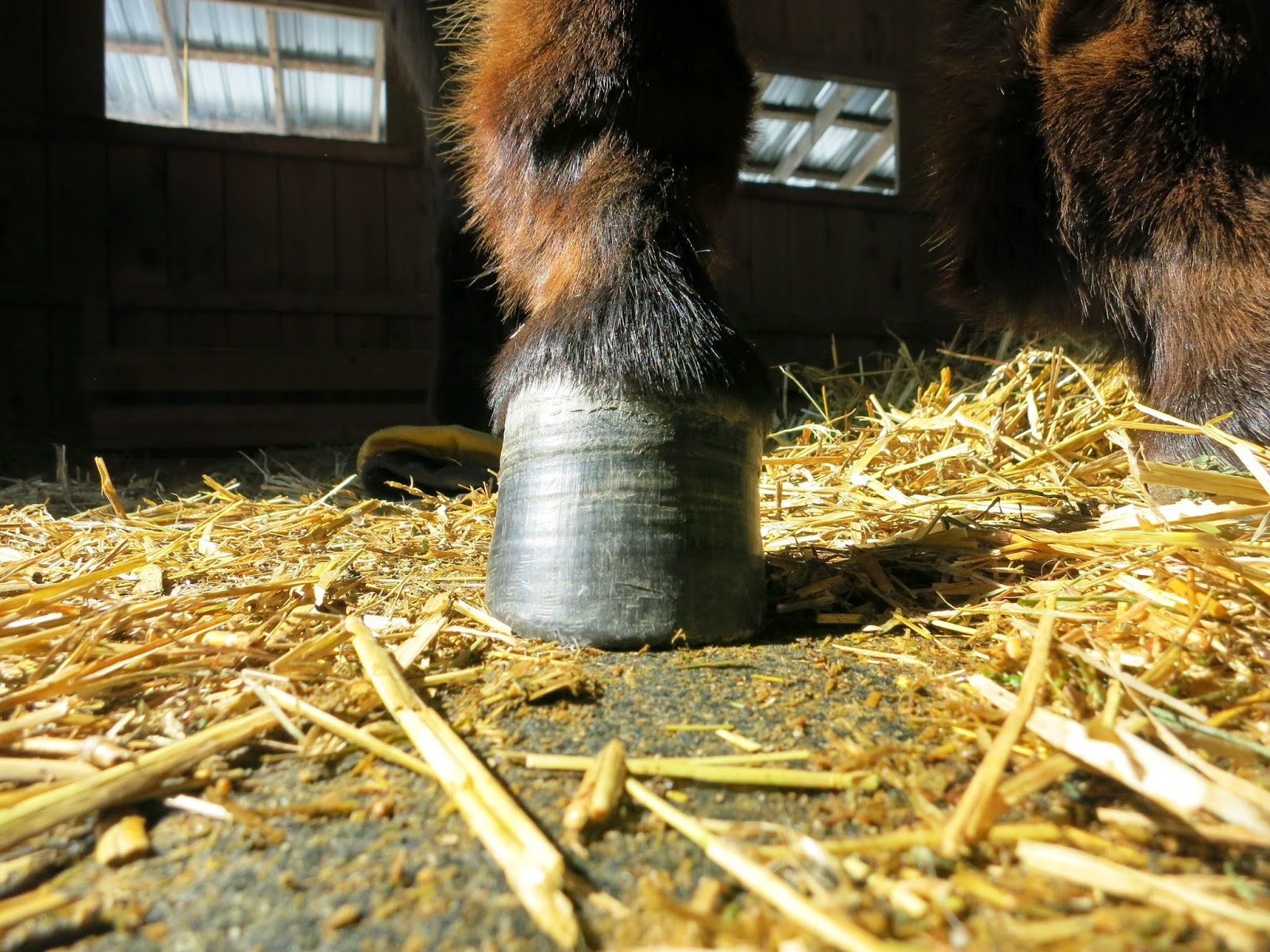 This is an object lesson in hoof care - you have to focus on the WHOLE hoof and in order to see the whole hoof, you have to look at the WHOLE donkey (or horse).  You can see in this photo that this foot is significantly taller than his other foot making him lop-sided. This can cause serious lameness issues. 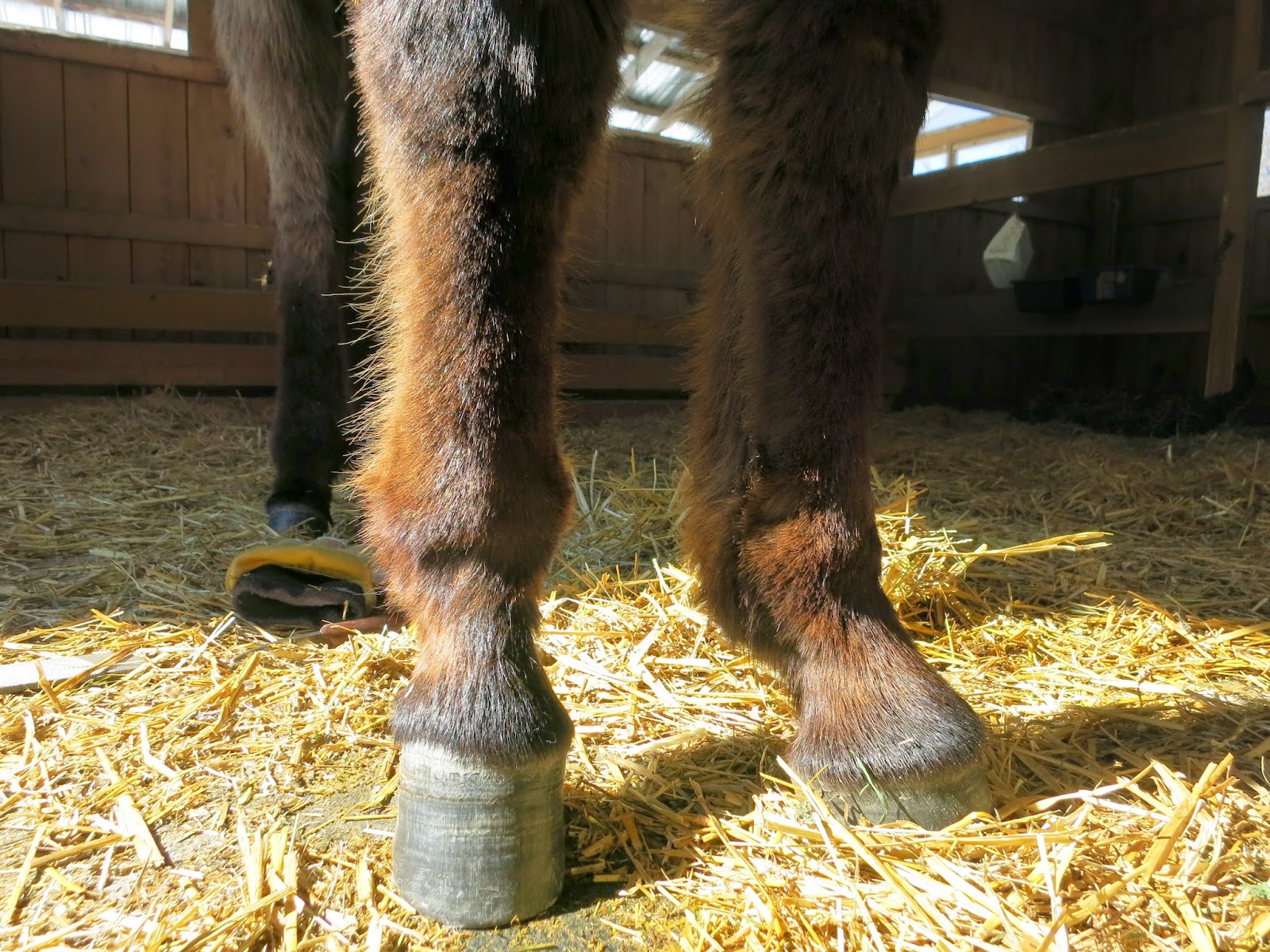 One of the reasons this foot got so tall is that it grows a lot more sole than his other feet (I believe that extra sole is his body's way of protecting the foot) and trimming sole is one of the things I find the most difficult. It is especially difficult on Ramsey as he also grows a super tough frog that fills in the collateral grooves. Normally you can get an idea of true sole depth by measuring the depth of the collateral grooves (those are the deep grooves on either side of the frog), but that is extremely difficult on this foot.

Donkeys grow a great deal of very tough sole that will not wear down on its own if they live on soft ground like mine do.  It just gets denser and thicker and it has to be trimmed or else the foot gets taller and taller until it fall over.  It is why you see so many neglected donkeys who have terribly deformed feet. When trimming horses, you almost never want to touch that sole.  When trimming donkeys, you have to.  This is the aspect of trimming donkey hooves that I find most difficult.

If you scroll back up to that first picture, you can see that it looks like I am already trimming into live sole, something you would never want to do to a horse.  I took a deep breath, screwed up my courage and took off nearly a half inch more after that photo was taken and ended up with this..... 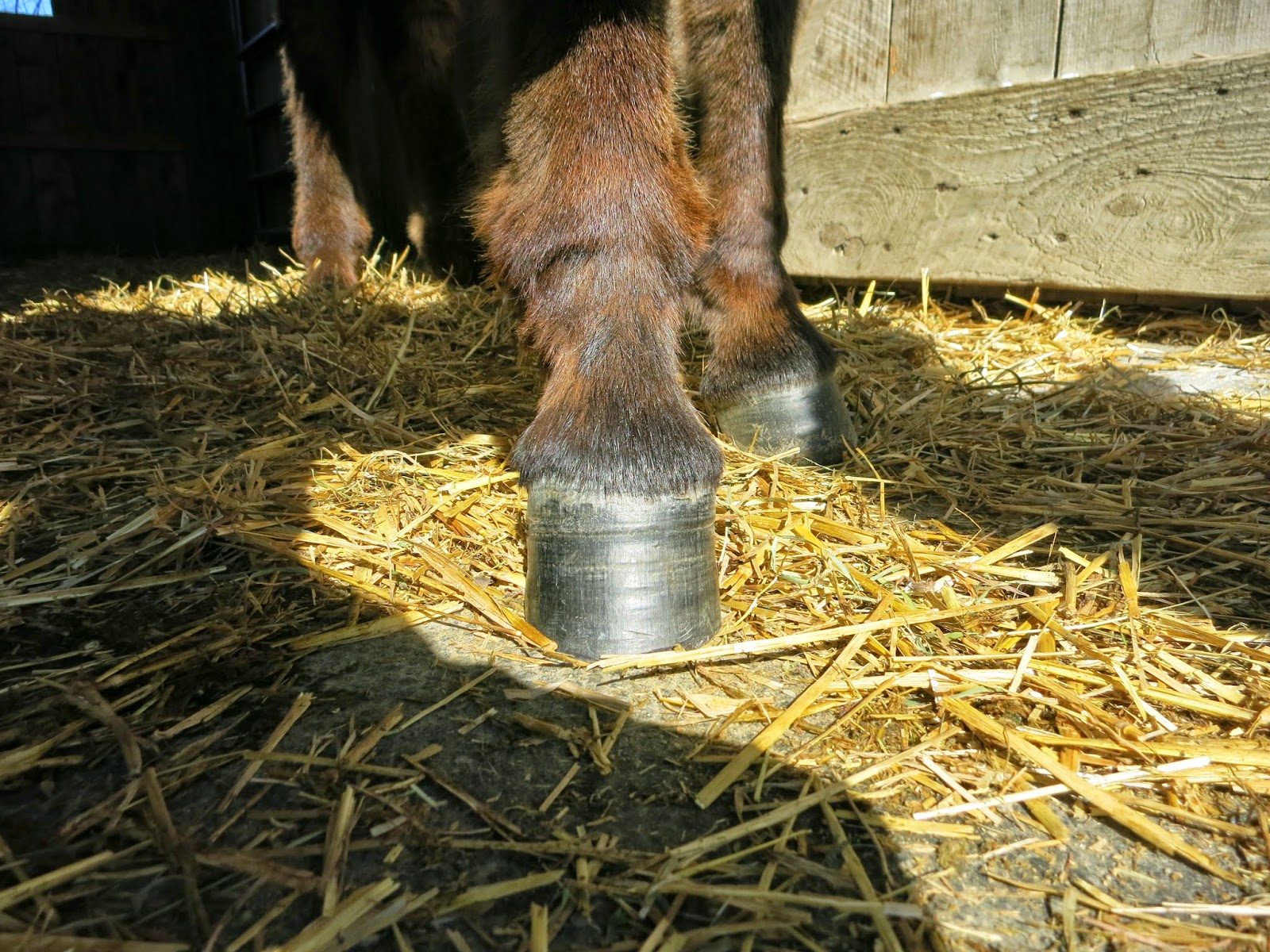 Ramsey was a lot happier after I trimmed this down and the sole looks better than it did in the first photo.  The foot is still a bit taller than the other and I will take a little more off each week until it is where it should be.  One of the only advantages of the snow is that it does help soften that dead sole that needs to come off.  If I take it down as much as I dare each week, the snow will soften the surface and make it easier to see what can still come off.

A perpetual work in progress, but not a bad looking foot all things considered. 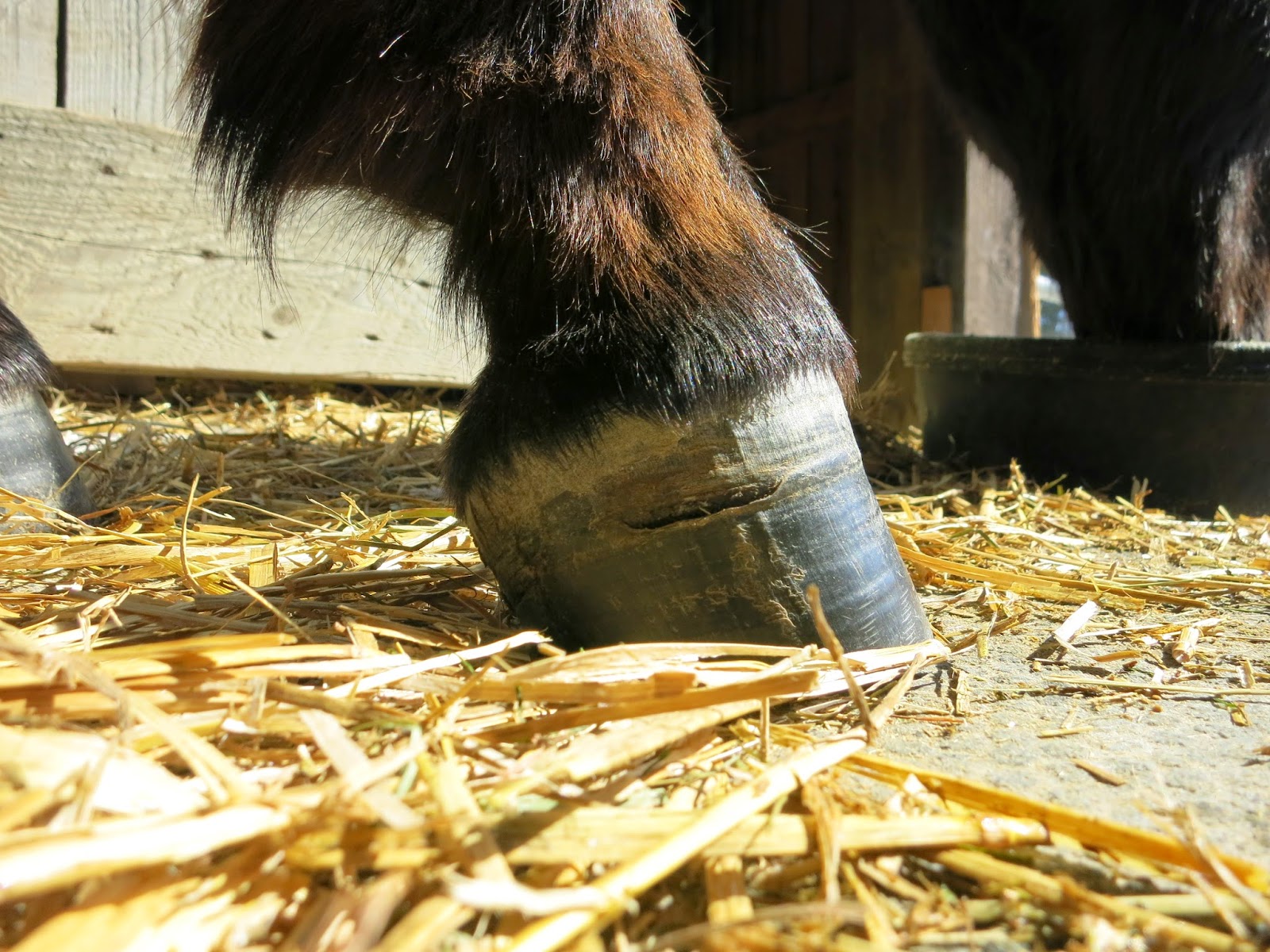