I know many of you are wondering how Connor and the equines are getting along.  So far, pretty well, but with room for improvement.

I introduced Connor to everyone shortly after bringing him home.  In typical fashion for an 8 week old puppy, he was at first intimidated, but very quickly lost all fear, which was not entirely a good thing.  I don't want him to be afraid of the donkeys or horses, but I do want him to be cautious, respectful and alert around them and to keep his distance.  Zipping around under their feet is not a good thing.

My first rule of puppy training is to reward the behaviors I want so every time I found Connor sitting quietly outside the barn on his side of the fence, he got a reward. 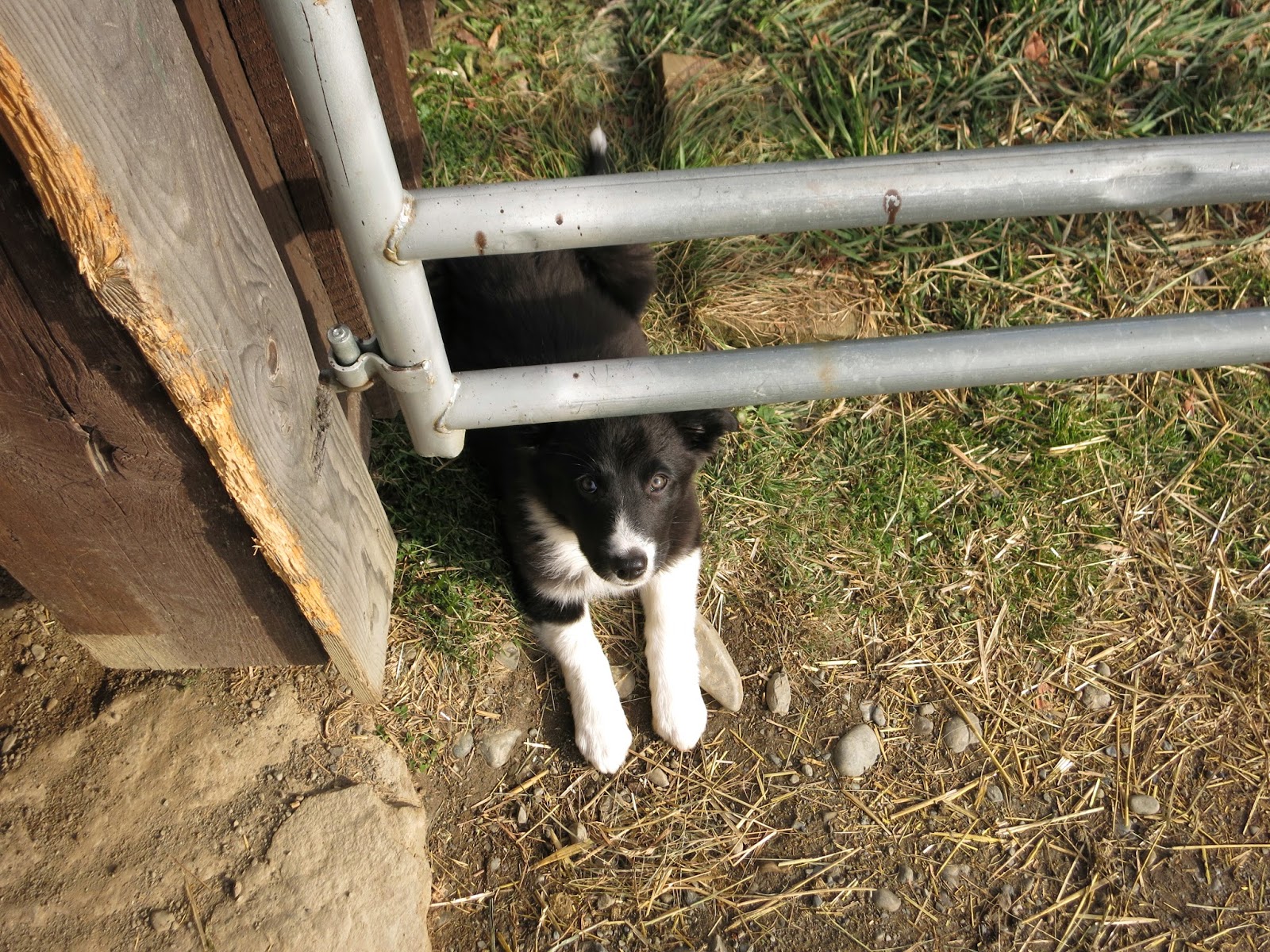 Connor caught onto this quite quickly, but was still too careless around the hooves.  Emma and Ramsey will tolerate this while they are distracted by their breakfast, but they are not going to put up with a crazy puppy dashing around in their space and they will chase him off. 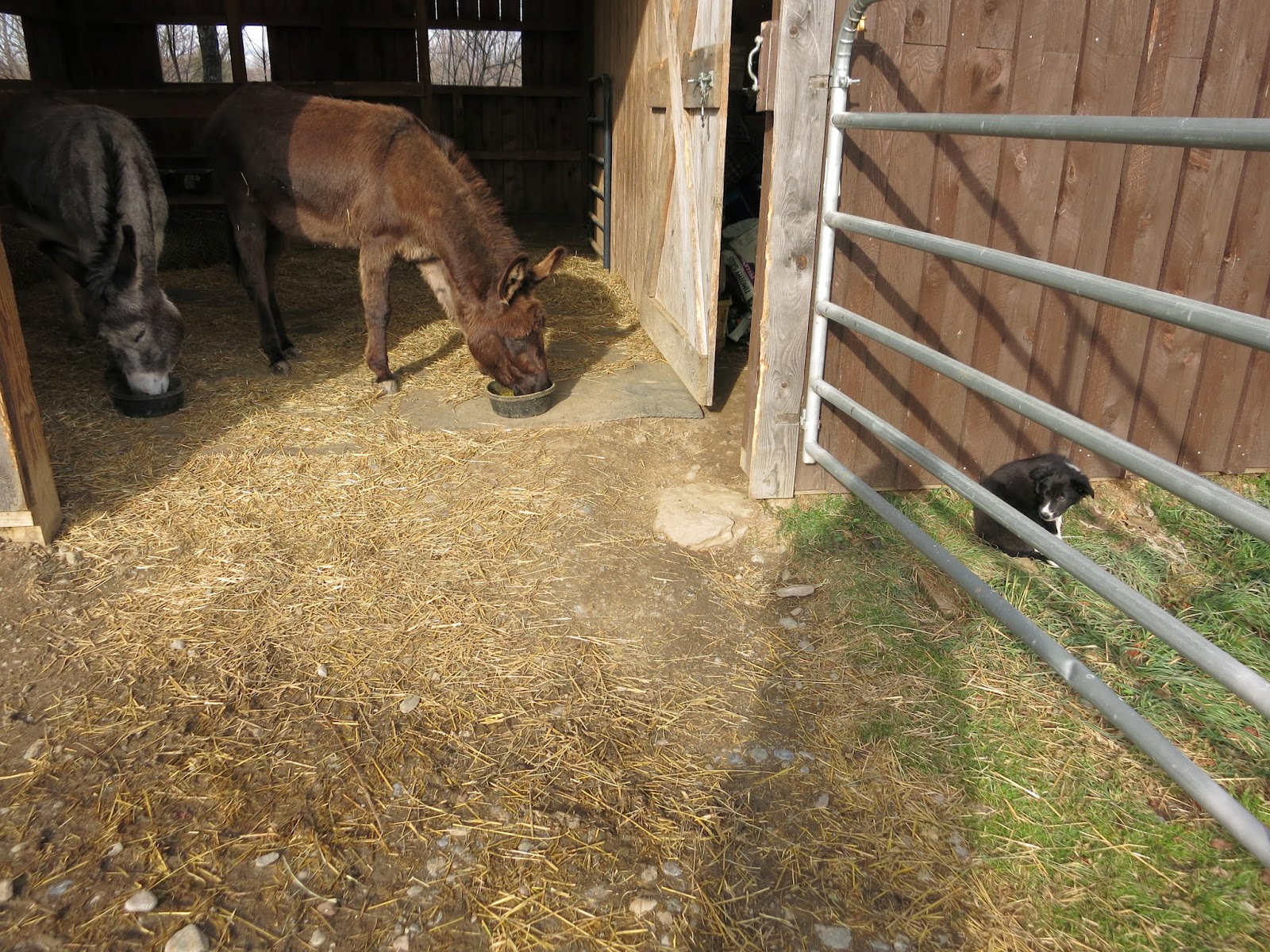 Ramsey in particular, was not happy to have his space invaded by this interloper.  He is quite jealous of Connor to begin with and doesn't want him in the barn.  I was working on teaching Connor to stay out of the barn when Ramsey took over.  In a display of just how much better animals are at communicating with each other than we humans are, he taught Connor where the boundary is in 0.8 seconds.  He gave Connor the evil-eyed, snake-ears, I'm-gonna-stomp-you look and, just like that, Connor learned to be wary of hoofed animals and respect their space.  Since that one dirty look from Ramsey, Connor no longer tries to enter the barn if any equines are present.  He stays on his side of the fence and observes. 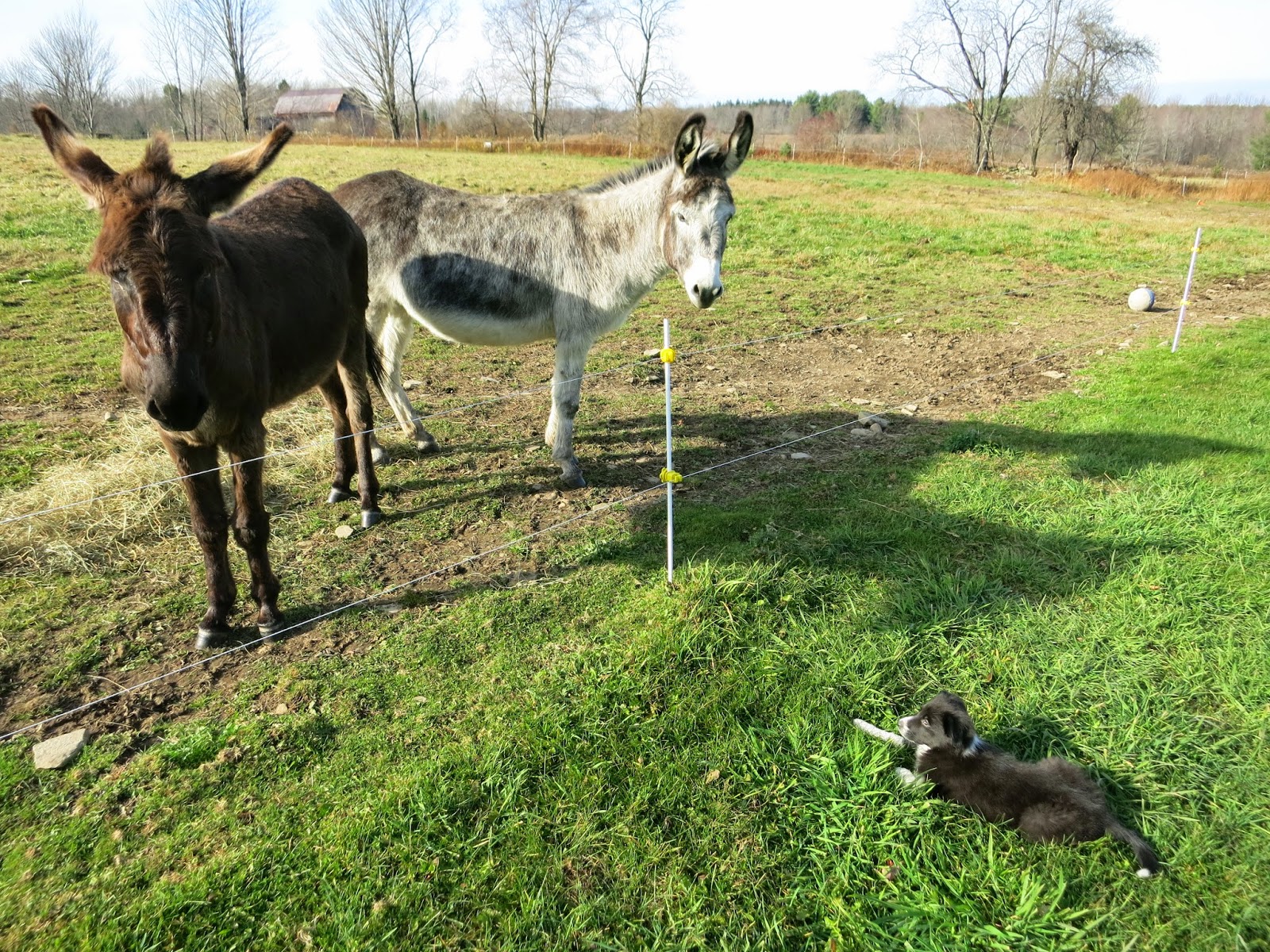 I know many people would rather see Connor safe inside a fenced yard with no access to the donkeys.  However, no fence is ever fool-proof and I strongly believe that it is better to teach him boundaries that he knows he is responsible for maintaining rather than relying on a fence that I know will invaribaly fail at some point.  He is much safer and we are all happier if he knows how to integrate into all aspects of his world.

Connor has already developed a very strong sense of boundaries, which I am very pleased with.  Outside on his own, he never leaves the perimeter of the house.  He understands that the fence line is a boundary between him and the other animals.  I think that accompanying me every day when I move the fence has helped teach him this.  At first, I carried him and only set him down once we had reached the fence line and I could put him in a safe place.  It did not take him long to grasp that "safe" is on the opposite side of the electric wire, even if it moves each day.

Out in the field, Tessa is the one I have to really watch around Connor.  She doesn't care about him being near the barn, but she is very defensive about dogs in her territory, which I am really very grateful for given the trouble I have with the neighbor's dogs.  Tessa has taught those dogs to give her pasture a very wide berth and they no longer venture into it.  She can be pretty aggressive towards stray dogs and does not hesitate to chase them down.  However, Tessa is perfectly capable of learning to differentiate between those dogs and my dog.  She knew not to bother Tanner and she is getting close to being trustworthy around Connor.

For his part, he has learned this invisible boundary as well.  He now accompanies us out into the field at a respectful distance.... 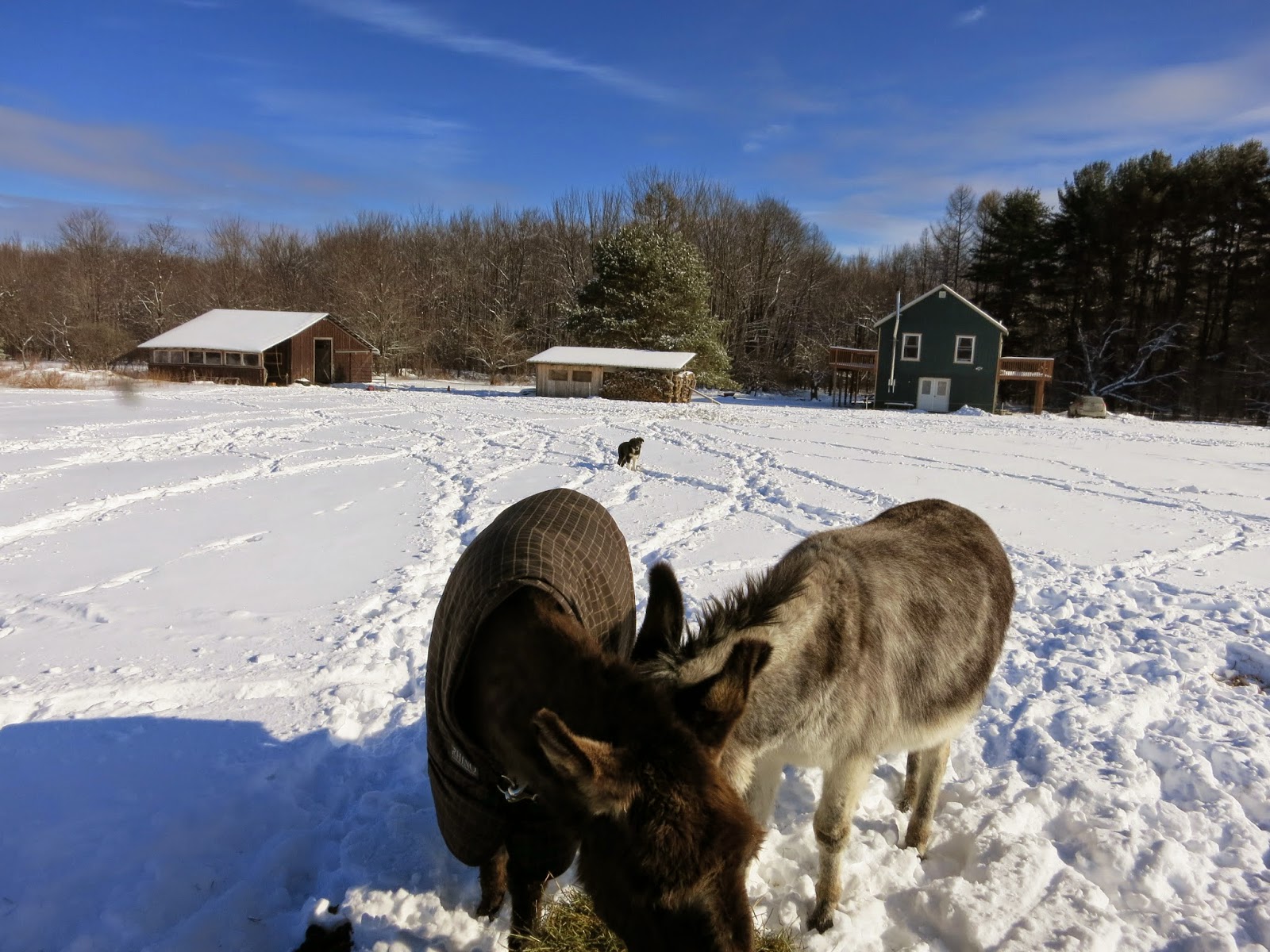 ....and he recognizes when to ease off and go around. 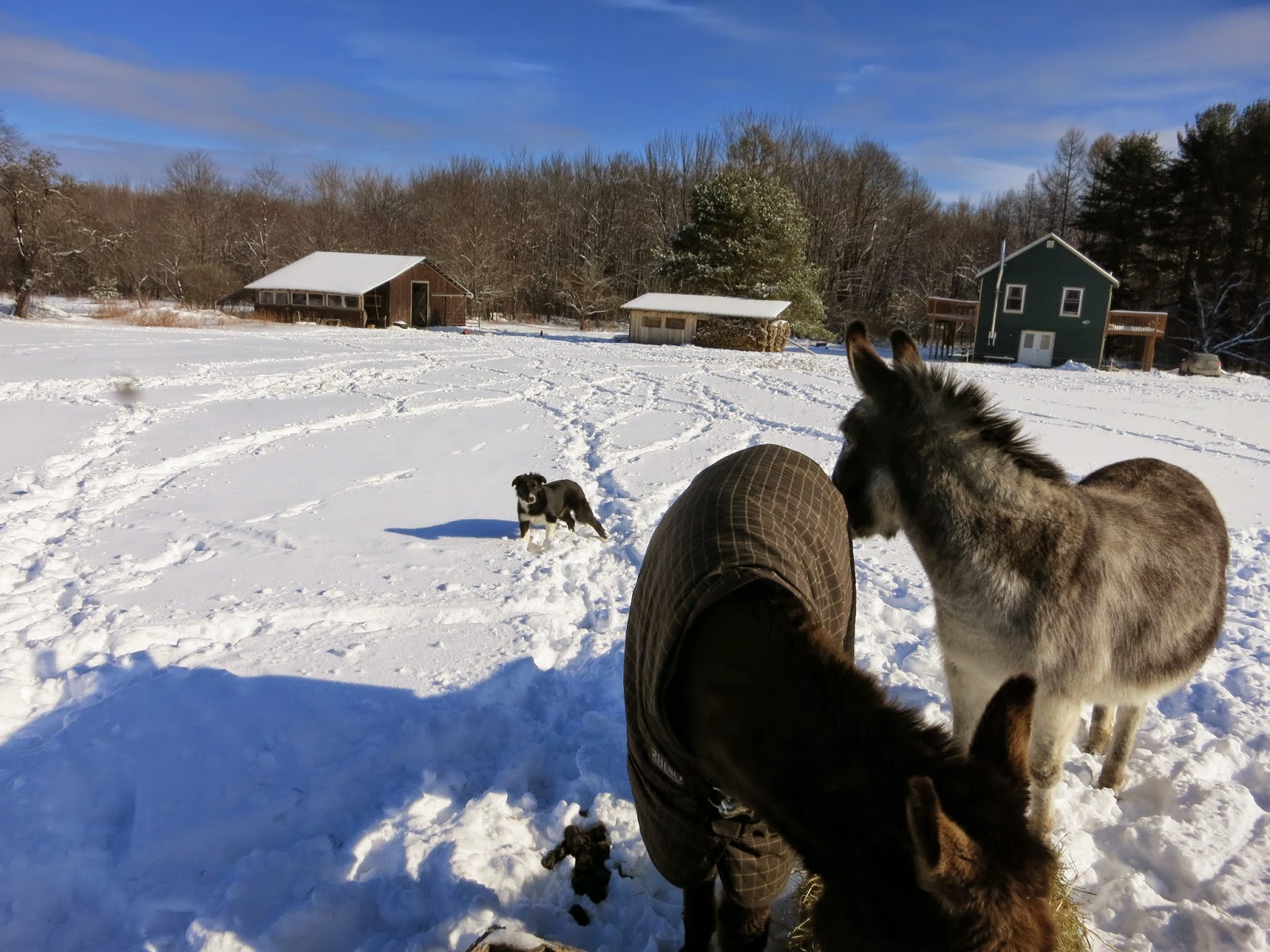 I see the signs of him developing a very natural and quiet out-run.  I don't know much about training for herding skills and I don't need it, but I have been giving him a voice and hand signal when he offers this.  I know he will learn to do it on command from there and with that, I can shape it to fit our needs. 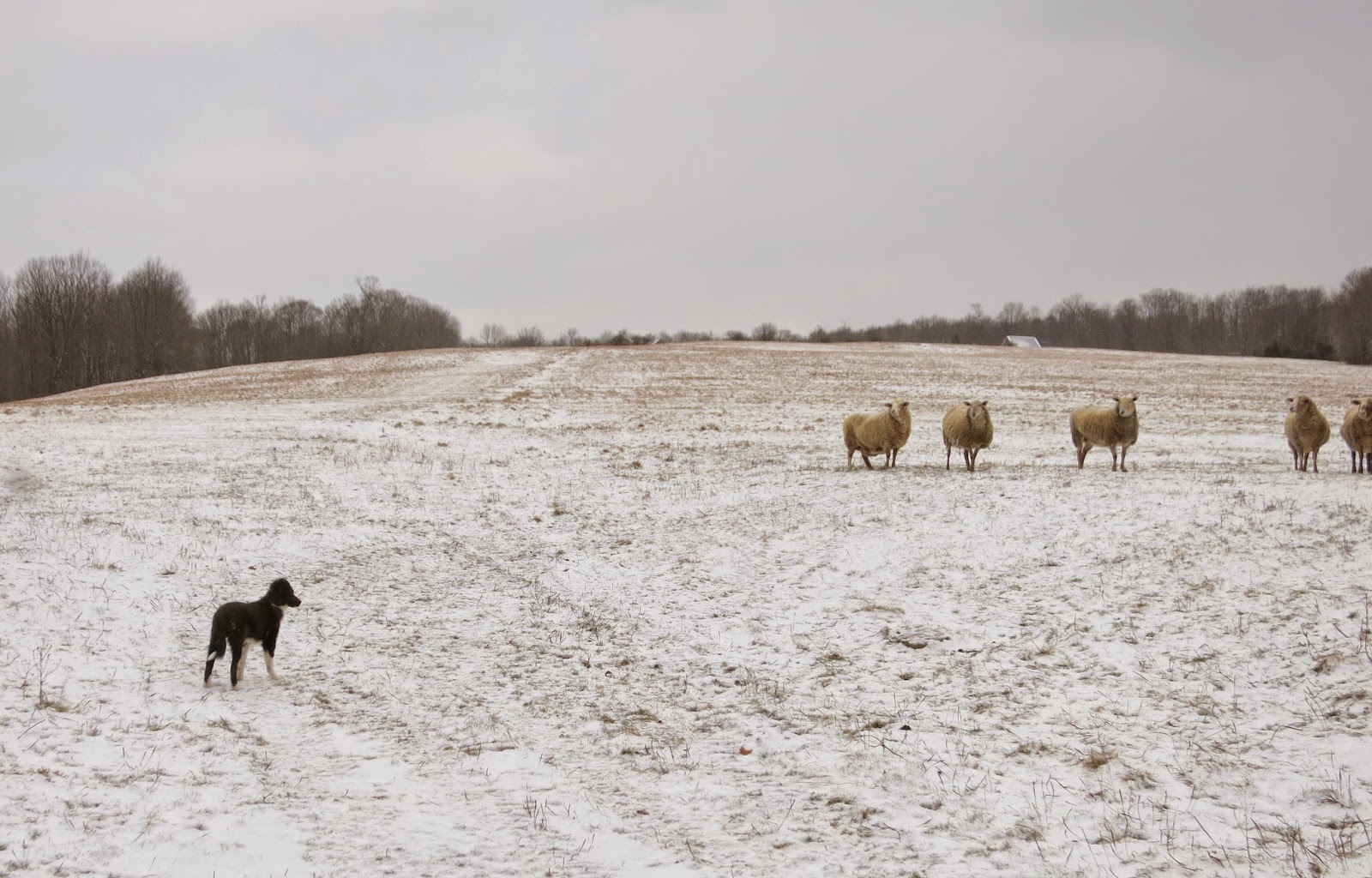 His donkey training paid off.  The cows were wound up and rowdy, but on the other side of a fence so he ignored them altogether.  He was interested in the sheep, but respectful and quiet.  He looked at them, they looked at him, I asked him to go around and off he went... 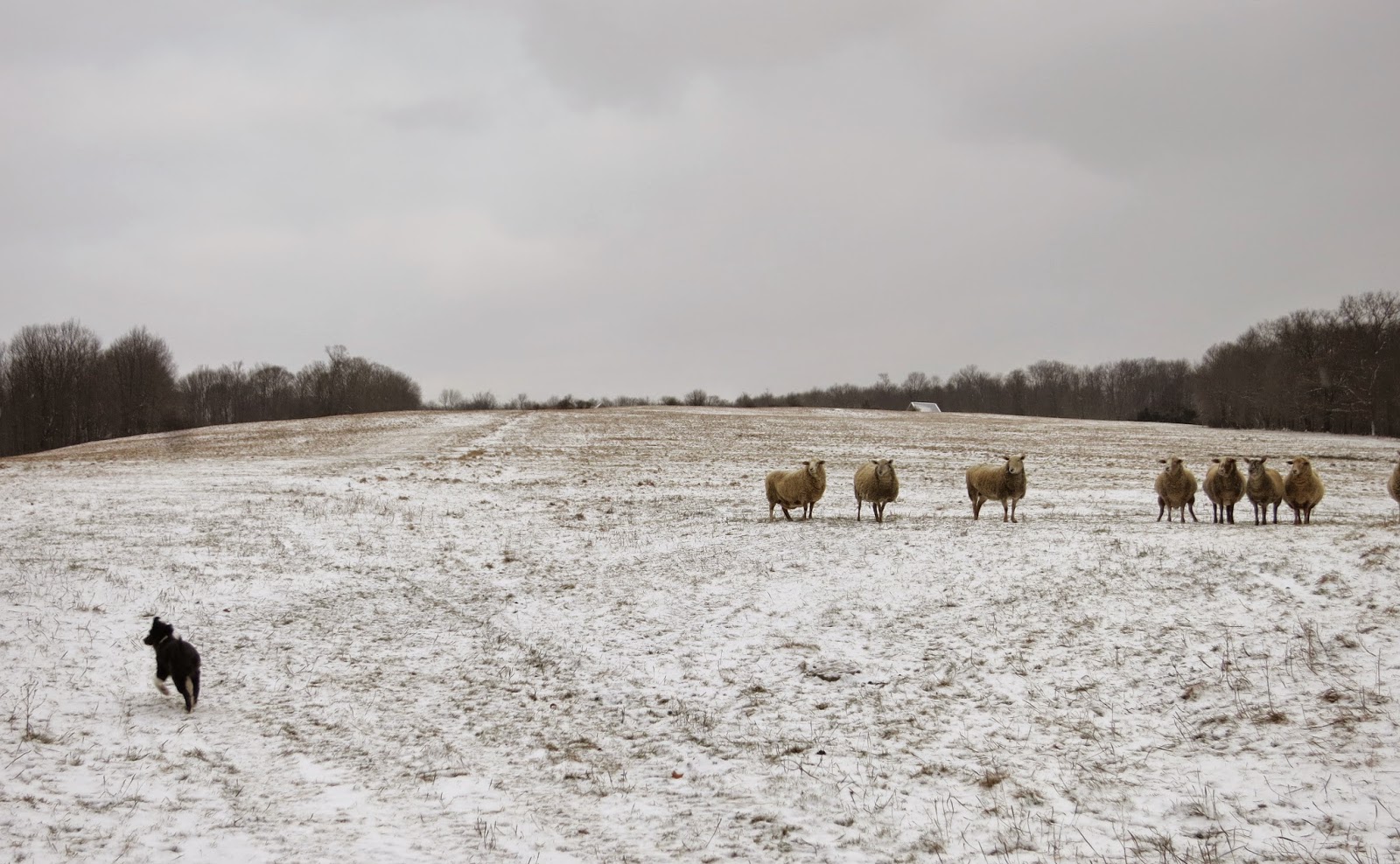 leaving the sheep to their own contemplations. 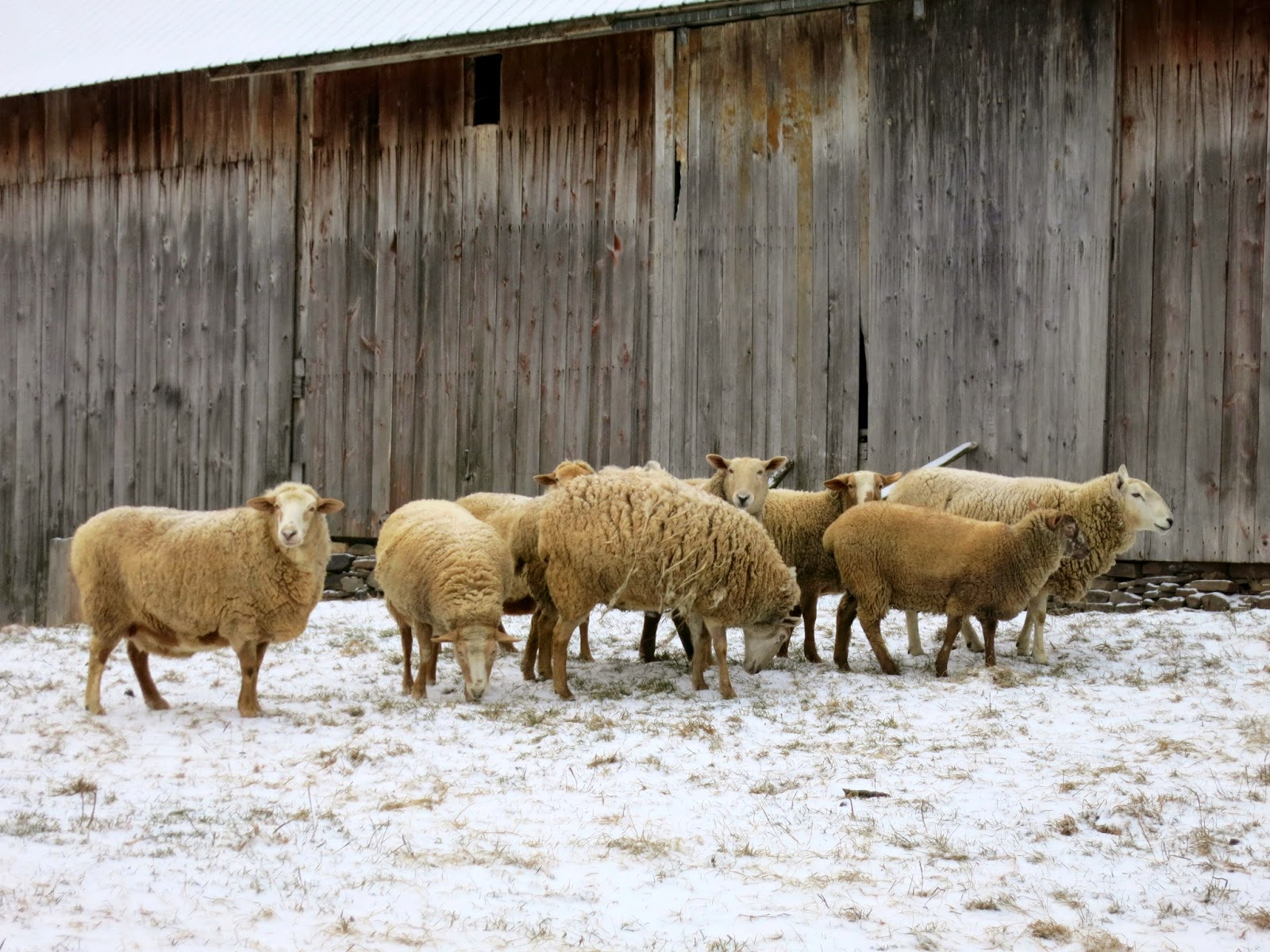 All in all, I am very happy with how Connor is around all of the stock.  I can see that there is a lot of potential there if I wanted to teach him to be a working dog, but I think we would both also be perfectly happy going no farther with it than he has already.  He is proving to be an exceptional hiking dog and that will likely be good enough for us.  He has certainly achieved the "cautious, respectful and alert" that I look for.  Where, if anywhere, we go from here is up for debate.

Posted by The Dancing Donkey at 2:14 AM