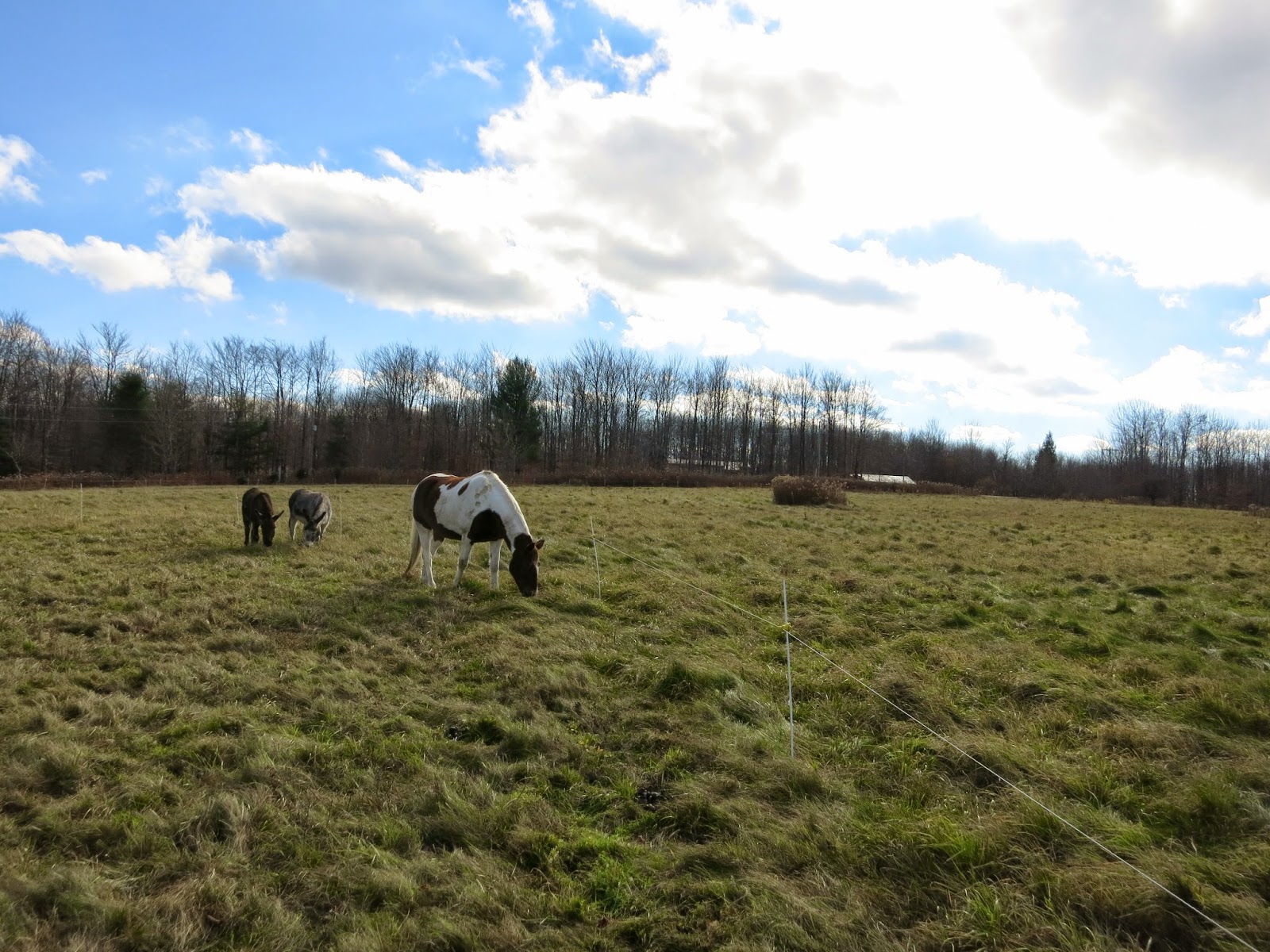 For  the past couple of years I've been using a track system to limit the amount of grass my little herd has access to while also maximizing movement.  There is a track that goes all the way around the perimeter of the field and that is what they graze on during the summer.  A byproduct of the system is that the vast majority of my pasture goes ungrazed all summer.  I did mow most of it mid summer and then left it alone again.

This Fall, I began giving the beasties a bit of this grass each day using strip grazing.  This is very easy with the portable fence I use.  Every day, I go out and move a small section of the fence inwards a few feet, giving them access to that untouched grass.  I usually move the fence in a different spot each day and sometimes I make smaller strips in several places around the track.  It's sort of a hide-n-seek game and they have to go out tromping round the track to find the good stuff.  They love it.  They are even willing to go out in the snow and dig for their supper. 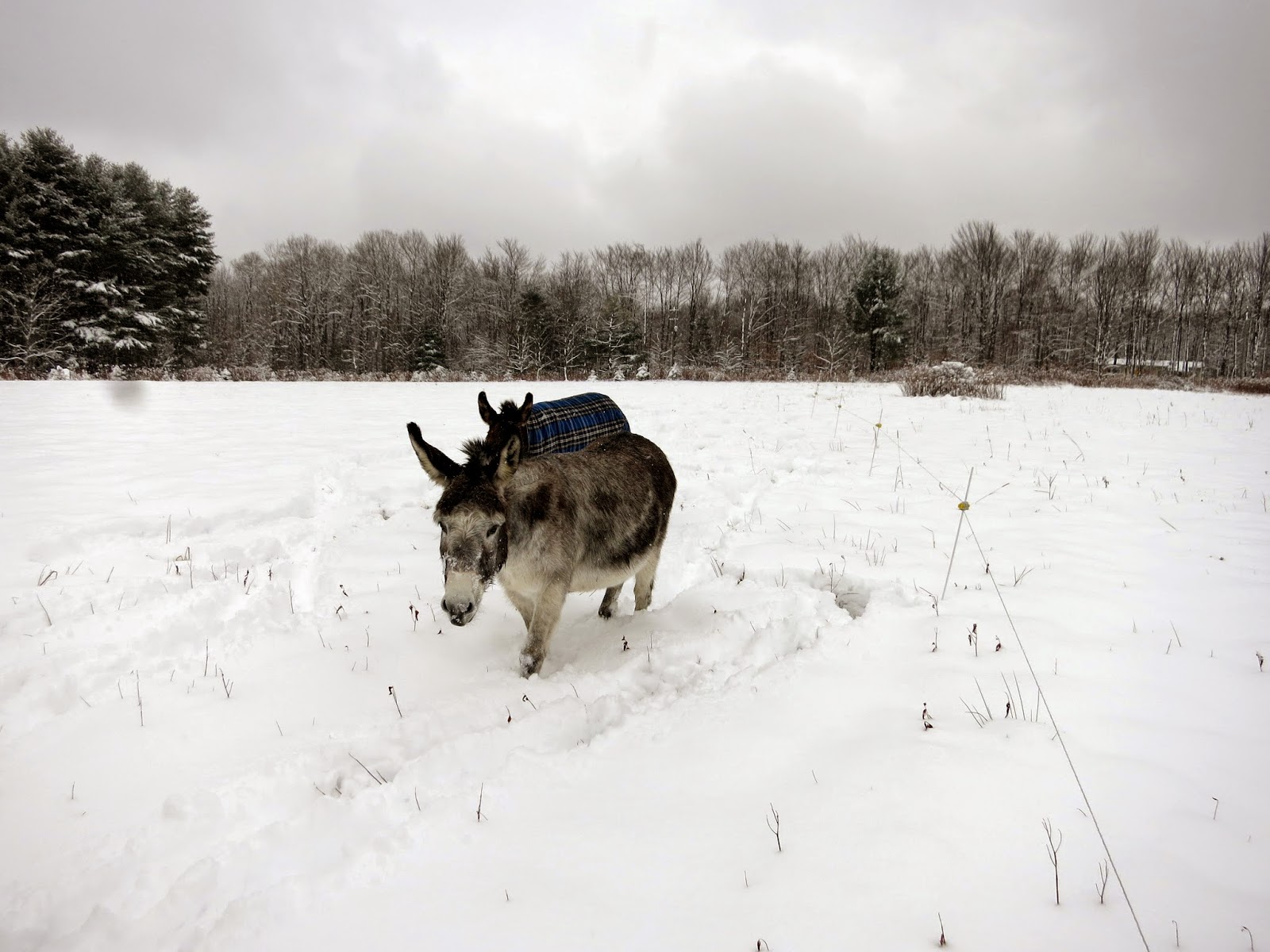 There are several benefits to this that I had not anticipated as it started out as merely a way to encourage exercise and alleviate boredom.  The first and most notable benefit is that we have made it all the way to the new year and I have only used about 50 bales of hay so far.  They are small 25 pound bales so that is not much hay at all.  They do have access to hay and straw in the barn, but they would rather be out grazing, even in weather that they used to refuse to venture out in. 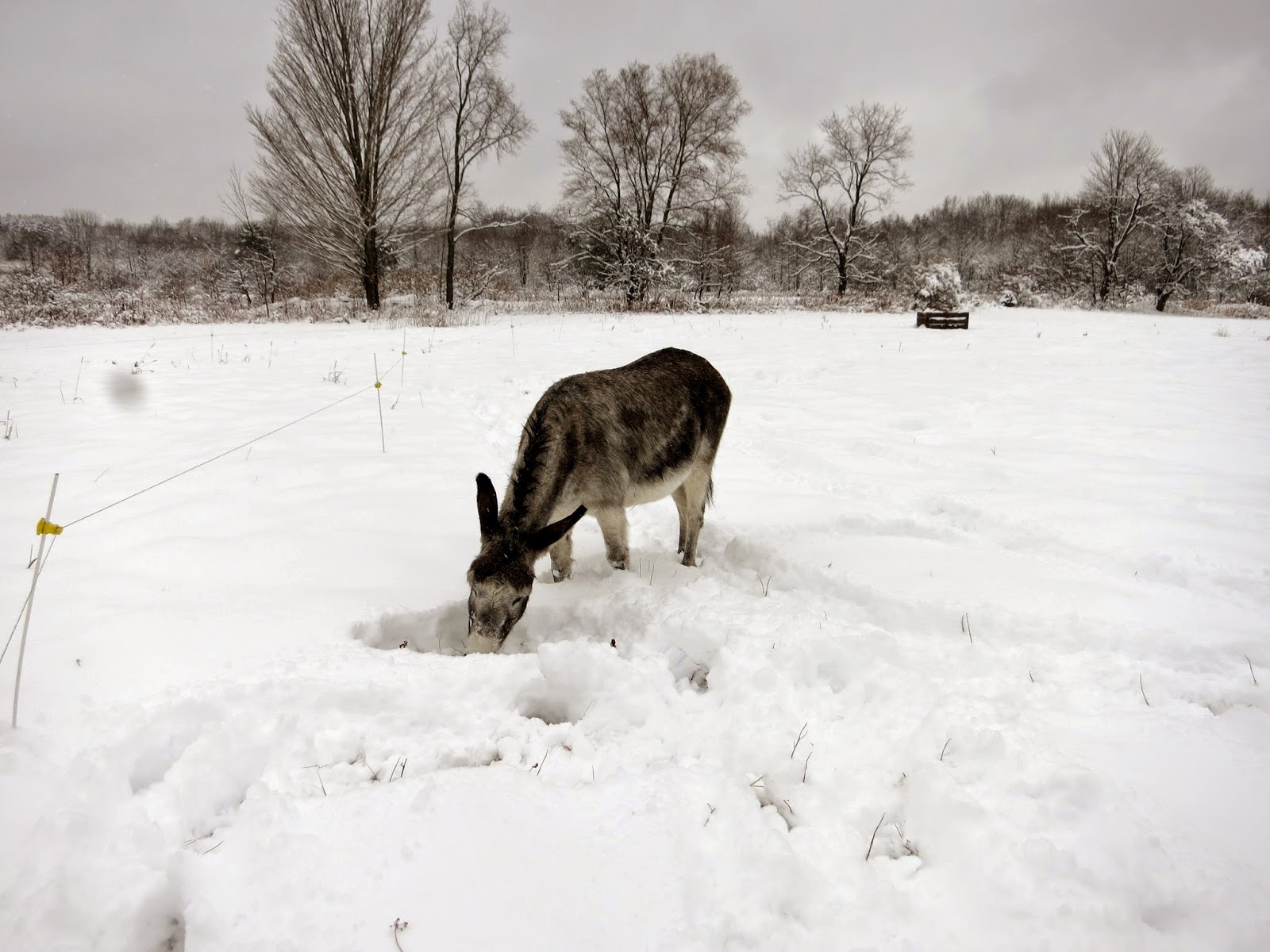 I believe that that willingness to be out moving around, rather than standing about waiting for me to show up with more food, is one of the reasons that Emma didn't need a blanket this year.  She was too busy out searching for delicacies to be moping about the cold and it gave her winter coat a chance to catch up.  That, and she has matured a lot this year and seems to be generally much more rugged now.

This whole grazing experiment has me really rethinking our traditional pasture management practices, especially for horses and donkeys.  Rotational grazing works great if you have animals with high energy needs.  The beef cattle fatten up beautifully that way and it is very good for the land, but it would kill the donkeys.  It's not so good for horses either unless they are elderly, in intense work, lactating or young stock who need a lot of calories.

Most horse owners just let all their animals loose on however much land they have available to them or alternate them between a couple of large paddocks.  Even with fairly low numbers of animals, the pasture will generally be exhausted by September and the animals will need to be fed hay until Spring.

Horses are especially tough on pasture because of the way they graze.  They will nibble their preferred grasses down to the roots while leaving other areas untouched except to use those spots as designated bathroom areas.  The short areas are prone to damage because there is not enough sod to protect the soil and the long areas become weed infested and the manure too concentrated. It wouldn't be an issue if the horses were out wandering the vast prairies they are designed for, but it is very hard on the enclosed land that we keep them on.  It's also not so good for the horses.  Stressed grass makes and stores more sugar and too much sugar is the number one cause of health issues in domestic horses other than musculoskeletal problems.

With the combination of using a track all summer and grazing the interior all winter, I have effectively extended my grazing season indefinitely.  Since I am giving them access to this grass in very small amounts each day, they graze the entire strip, leaving no high spots.  Since they get new grass each day, they don't overgraze the previous days offerings.  When they graze this way, they don't create designated bathroom areas so their manure ends up spread out evenly all over the field.  It becomes valuable fertilizer rather than troublesome waste with no extra work on my part.

I am limiting the pasture stress to a narrow strip around the perimeter of the field while maximizing soil and grass health on the majority of the land, and I've drastically cut the hay bill while doing it - at least as long as the snow doesn't get too deep.  That is the one real limiting factor here in the North East.  They will dig through some snow, but they can't dig through LOTS of snow. 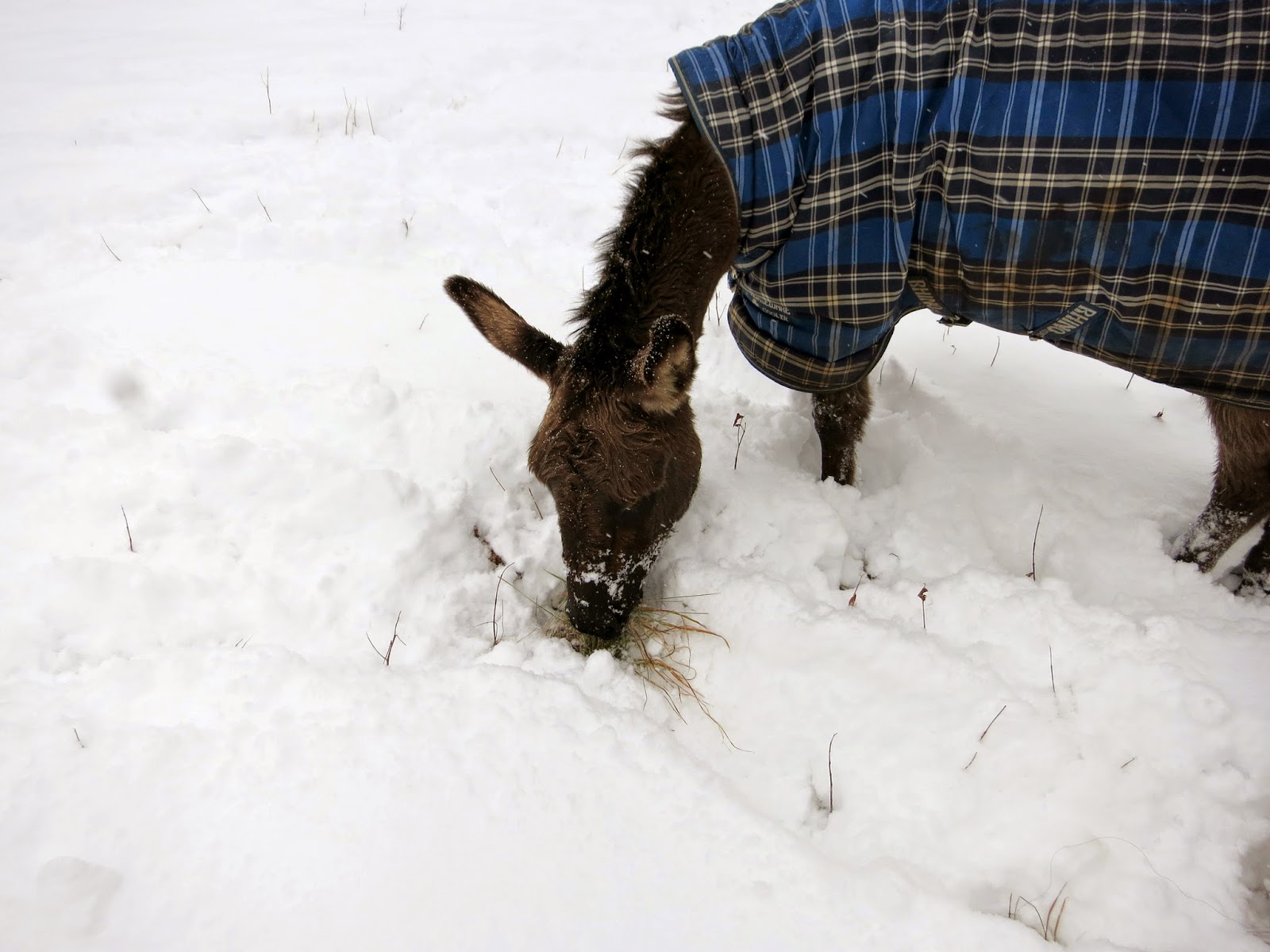 Even in a really bad year though, this still works.  Last year was about as bad as it gets, but in the early Spring, after the snow had gone but before the new growth came in, I turned my herd out on the whole field.  It's something I never would have done in the past as I would not have wanted them out there damaging the new growth and digging things up.  However, since I am always battling the bulge and the mud was awful, I said to hell with it and turned them out.  After being cooped up in the barn by the frigid temps and deep snow, they were thrilled to get out and graze all that winter-killed grass.  Two months before I would normally start the grazing season, they quit eating hay in favor of the stock piled grass.  It was a good thing too as FB ran out of hay last year and took 150 bales out of here to fill the gap.  I would never have had it to spare were it not for my "stored" grass.  They did dig up the ground a bit here and there, but with the entire growing season to recover, the damage disappeared.

Best of all, my herd loves this.  Rather than standing around in the barn all day twiddling their ears, they are out doing what they are meant to do.  As soon as I head out to move the fence, they fall in behind me, eager to get to the new goodies.  For anyone who relies on any amount of pasture to keep their critters fed, you might want to give this a try.  It's a win, win, win for the land, the animals and the checkbook.

Posted by The Dancing Donkey at 11:01 PM